20
Posted 20th Jan
Suppose I just want to have a rant here and see if there is anyone else in the same boat as myself. has anyone bought from Durest Beds before?

We used them in 2015 for a black divan with headrest and mattress and the service was superb and delivery prompt.

Due to this we decided to buy from them again and this time it has been a completely different service all together...

Delivery was due on Thursday 16th January and my wife waited in for the delivery. The driver showed up, knocked on the door and asked if there was anyone available to help him lift the bed off the van. When told no by my wife he then said to her she should come and lift it off. Now my wife is 7 months pregnant and we have a 2 year old running about the place so she can't exactly do it.

Once he was told no, he said he wasnt going to deliver and called his head office and passed the phone to my wife. She was told that she should give the driver some money and he will carry it in for her!! I don't mind tipping but being told to do it...hell no!!

Since then the company has had minimal contact and anything that has come from them has been false promises.

We only moved into the property on 16th and we have no bed to sleep on (sleeping on couches) and they do not care a single bit.

Opened a case with eBay yesterday and they responded straight away saying looking into this for me.

So to sumarise, I wouldnt recommend them to my worst enemy!
PostTweetShare Share with WhatsApp Share with Messenger
Community Updates
Ask
New Comment Subscribe Save for later
Top comments
20th Jan
Inbox me a link to the item you purchased and I will make an enquiry as to what delivery includes on the pretense. that I intend to make a purchase and send you a screen grab to help your case - I'm bored (as I am recovering from a back op so cant do anything thats physical) and anything to break the day up is a welcome task.
20 Comments
20th Jan
Sounds like a right cowboy firm, how did you pay ? If by PayPal just put a claim in
20th Jan

Was purchased over eBay using PayPal. Have opened a resolution with eBay for it. At the end of the day all we want is the bed so we can get off the couches and have told them this. Just make the delivery and we won't have to deal with them again.

They have opened at 9am this morning so will be going to call them very soon, will be surprised if they answer.
20th Jan
Just can't believe that they expect someone to help them !

You want to ask if anyone injures themselves while doing their job does their insurance cover it , Good luck with it all the same .
20th Jan
That is appalling service. If you pay for delivery then you expect the item to be delivered to you, you shouldn't have a pregnant woman being told to help lift the bed out of the van and you certainly shouldn't be told to hand over more money to have it properly delivered. As well as your complaint with eBay you might want to consider contacting your local newspaper or other media with the story.
20th Jan
Managed to get a hold of them this morning over the phone and spoke to a lovely lady who has apologised and said that we will get the bed delivered tomorrow 100%

Hoping that this is the case and the last that I will need to deal with them but will see if this actually happens
20th Jan
I could (almost) understand it if delivery was to the door but to not even unload and expect anyone at all to help remove from the wagon - let alone someone pregnant is bang out of order. I have seen large an bulky items state that delivery is kerbside only but thats only been with building materials, sheds and even engines. A divan bed though should be a 2 man job and into the house at the very least, with further options an optional extra. When I managed a charity shop we had two man delivery teams and told customers delivery was to the door but if you offer them a brew and be nice to them they would likely be willing to place it in any room they had clear access to, it was dependant on the customer taking measurements and ensuring the item would fit through the door.
20th Jan
Inbox me a link to the item you purchased and I will make an enquiry as to what delivery includes on the pretense. that I intend to make a purchase and send you a screen grab to help your case - I'm bored (as I am recovering from a back op so cant do anything thats physical) and anything to break the day up is a welcome task.
20th Jan

Link for the bed below. It does state that delivery will be to the door of the building but they would not bring it into the flat or up the stairs which we had accepted.

Divan Bed
20th Jan
I’ve ordered a mattresses from this company off eBay. They have delivered the wrong mattress 2 times and it’s been 2 weeks since ordering. They were supposed to collect the 2nd mattress last week I even took a day off work to wait but they didn’t come. Wouldn’t use this company again even spoken to a few people who would say the same it’s an awful company and the communication is appalling the woman I spoke to was rude.
20th Jan

Communication from there is horrible. I have called and called with no luck. Surprised I even got through this morning. Hopefully the woman keeps her words and it gets delivered out to us tomorrow.

Hope you get it sorted aswell!
20th Jan 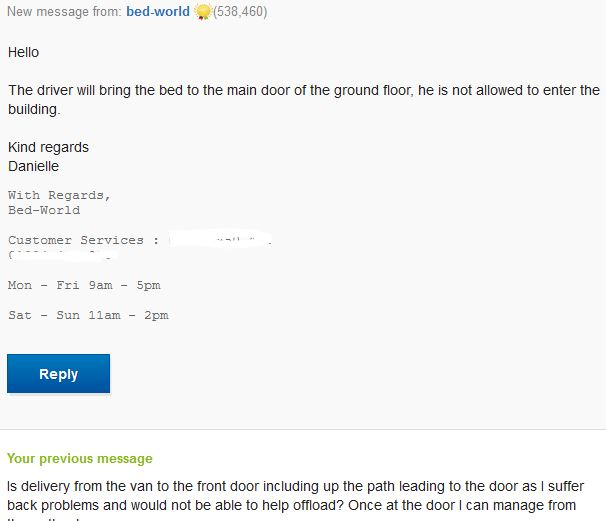 Yup thats the claim but the driver refused to even lift it from the van.

At one point Danielle, the very same woman, told me that the drivers were not allowed to lose sight of there van which was a very strange statement to make
20th Jan

Why would it be a strange statement? They are responsible for the van and contents whilst being the driver?

What delivery company is used to deliver as the problem would be with them and not the company you purchased the item from, unless they do their own delivery?
20th Jan

Would be a strange statement because if you expect a delivery you expect them to delivery, not to the point where they can no longer see there van. Some people have a back car park (block of flats) and you can't always see your van from where you are.

So you have slated a company on here when the problem was with who they use to deliver?

I can see why you would be annoyed but you are complaining about the wrong thing.
20th Jan

Courier is employed by the company, I have no contract through the courier.

Company are the ones who are failing to solve the issue and ignoring calls.
20th Jan

You stated earlier that you have made contact and it's being delivered tomorrow?

Ask for contact information for the courier but don't slate a company when you haven't given them chance to sort it.
20th Jan

Also have written confirmation that the delivery was taking place over the weekend but that never happened either.

Company was told about the issue, never tried to resolve it and it was myself who had to repeatedly make the contact to try and get the situation resolved. As stated, 7 month pregnant wife without a bed sleeping on a couch.

I shouldnt need the information of the courier as its the company who advise me when its being delivered, give me my slot and have hired the courier to deliver. At this point the courier is hired by Durest to deliver for them
20th Jan

"Shouldn't" doesn't get you very far with online orders unfortunately, let ebay do their thing if you don't get your item tomorrow, escalating it to paypal without giving ebay time usually ends badly despite it seeming to be the right course of action.
20th Jan

They avoided contact all weekend and as soon as I opened the case with eBay on Sunday they replied straight away.

Have made sure that all communication is written through the resolution aswell so eBay are aware of the promises that they are making.