10
Posted 16th Mar
We had a faulty electric shower which was overheating the hot water so that the water came out boiling hot. We got a replacement shower and it worked fine for the last month but it suddenly stopped heating the water so now there is only cold water coming out.

The shower is under warranty so Aqualisa came out to fix it but they said that the earth was faulty and so there is no looping causing the power to trip and so preventing any power to the shower even though the isolation switch is still on.

There is no tripping on the shower fuse on the consumer unit so he is talking about his test.

They advise that I need to get an electrician in to sort out the cabling as they don't believe it is the shower that is faulty.

Anyone know about electrics and can comment on whether this is possible? That the power could not go to the shower even if the isolation switch is working if the earth is faulty at the shower end?
PostTweetShare Share with WhatsApp Share with Messenger
Community Updates
Ask
New Comment Subscribe Save for later
10 Comments
16th Mar
here is the wiring for the shower 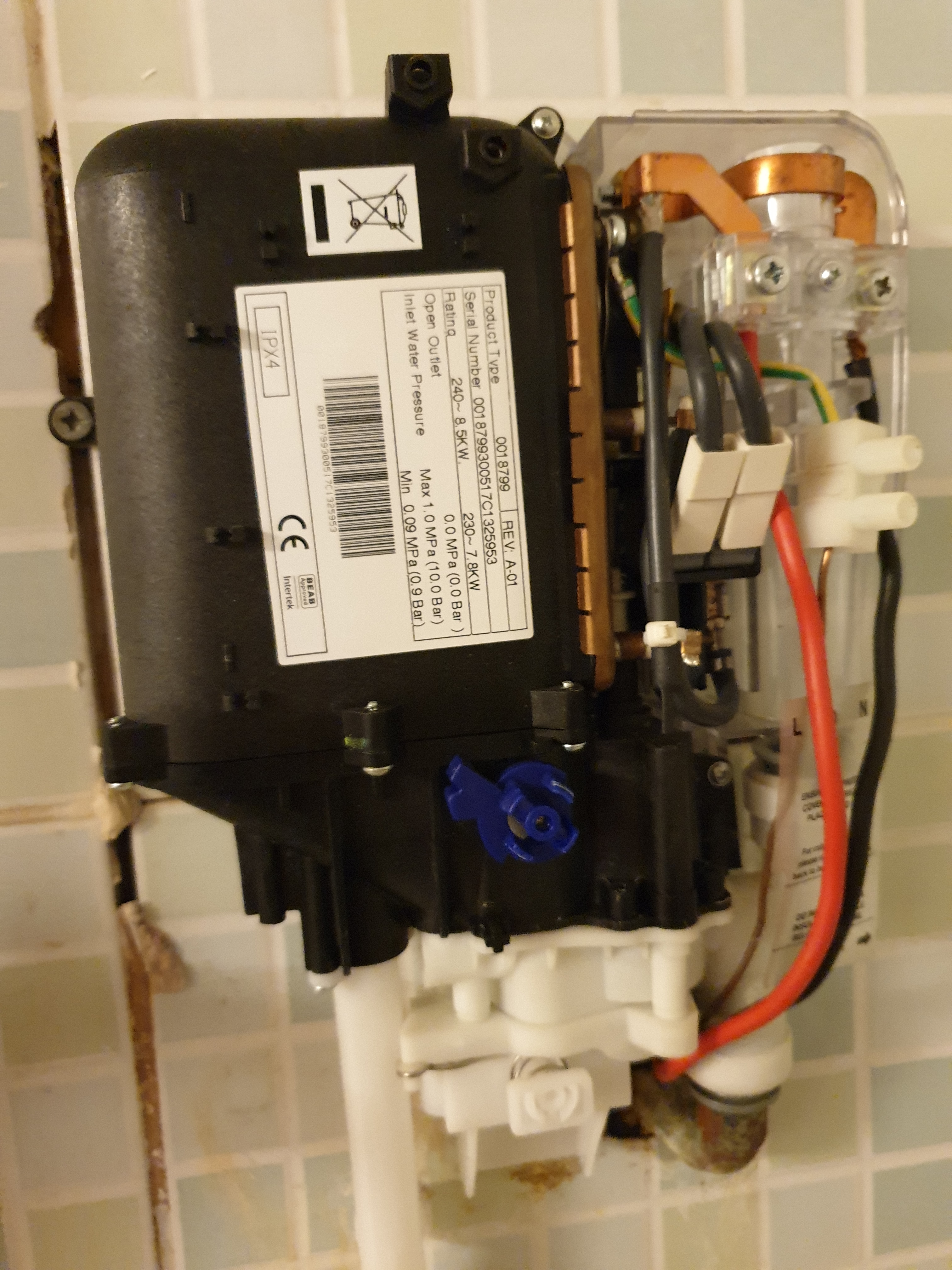 16th Mar
I'm not an expert, and I know this doesn't affect the working of the shower, but I would have thought that bare copper earth wire coming in (between the red and black) should have green yellow sleeving on it, the same as the wire its connected to does.
Was this installed by an proper electrician?
Edited by: "Delbert.Grady" 16th Mar
16th Mar

And where's the grey sheathing?
Does the earth actually go to an earth in the ground? (So many houses with plastic pipes these days)
16th Mar
As Delbert says - there shouldn't be any bare wires and you need to get that wiring checked.

I think what he is telling you is that the shower has an rcb device built in and it is tripping. Could be because that bare earth(?) cable is touching something.
Edited by: "mas99" 16th Mar
16th Mar

but does it stop power to the shower? earth cable is not live and it is for the power to run to if there is a fault as far as i understand. he says "there is no looping", not sure what that means. he tested the live and neutral and he says it is fine.
16th Mar

When I was working (alongside a qualified electrician) we often used a device called an Earth Loop Impedance Tester which, as I understood it, checked that the earth wire within a house or building actually was a real earth and was offering some protection.
In many cases it wasn't, the earth wire had originally been connected to a metal water or gas pipe which had since been converted to plastic so there was no longer an earth connection, as esar suggests above.
I think that is what your Aqualisa man is saying, that your earth is not a proper earth, it doesn't go to ground.
16th Mar

do you think this means that the earth for the whole property is faulty or just the one on the shower? we had a new consumer unit installed a couple of weeks ago and a landlord electrical safety certificate issued by a NICEIC registered electrician and he passed the certificate. the new consumer unit and landlord certiifcate stated the earthing that he has tested and it was satisfactory.

i was planning to contact him and ask him about the problem but i wanted to see if anyone could say whether the Aqualisa shower engineer is talking rubbish and whether this is a new job that i need to pay the electrician for. the shower was already broke before he did the work but i didn't mention to him as i thought it just needed a new shower and it wasn't the power supply as the isolation swtich is still working and showing a red light on it.
16th Mar
Looks like shoddy workmanship
17th Mar

As you've had a new consumer unit fitted and a NICEIC landlords electrical safety certificate to go with it I think you can assume the house wiring and earthing is ok. As you say the electrician would have done most of the testing at the consumer unit while he had all the wires disconnected, I doubt he would have taken the cover off the shower though he would probably have inspected the isolator switch.
I don't know if the Aqualisa guy is correct or not but seeing as you have the cover off the shower it would quite quick and easy for your electrician to test the wiring between the shower and the isolator switch, if he didn't include it in his original test.
Edited by: "Delbert.Grady" 17th Mar
17th Mar

i will contact him. when you install a new consumer unit you have to test all the wiring at the CU before connecting it as well as the earth bonding as he would charge more for doing the work if earth bonding was not adequate so he would have flagged this up to get more money if that was the case.

to get the landlord certificate he would inspect all the sockets and light switches in the house to make sure they look safe but i don't think you are required to open up appliances to check connections as that would take a very long time and the certificate examination takes about an hour to do.

i have opened up the isolation switch and it looked fine as i did think that the wires may have burnt out in there and so no power is going to the shower. the Aqualisa engineer said he had equipment to test the wiring for the shower and that showed a fautly earth cable as there is no looping, which was causing short circuiting. he said he is not an electrician so i would need to get an electrician round to fix the cabling but he claims the shower is not broke, although how he had established that without power makes me sceptical about his assertion. i do wonder if they are claiming it is the cabling to push responsibility away from themselves.