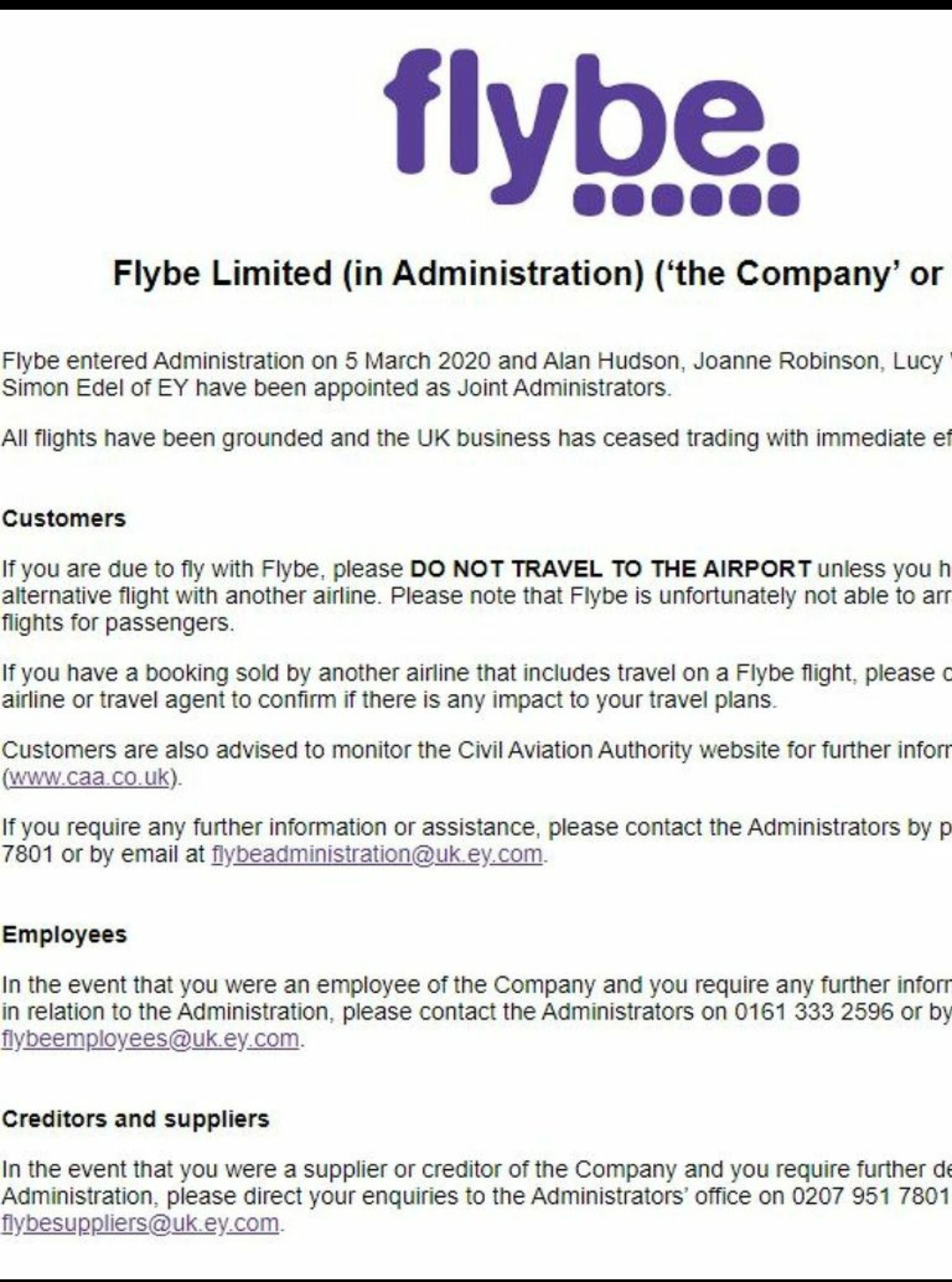 Hey folks, Not good news for the workers of FlyBe or those who have booked with the Airline...

Rumours are FlyBe is on the brink of collapse and that the accountancy firm EY is on standby to handle the possible administration of the Flybe Group. Also the Goverment is also said to be on standby with also 2000 jobs at risk.

The airline is based in Exeter and operates almost 200 routes in the UK and Europe.

FlyBe was only rescued last year

I have a ticket for a future flight on Flybe. What can I do?At this stage, nothing more than assume it will go ahead. Flybe says: “We don’t comment on rumour or speculation.”

But all of Flybe’s operations are going ahead as normal, and the main concern today is high winds over the Irish Sea.

Operations are said to be ''continuing as normal'' but strongly advise you check before you travel!

if/when anything changes, will update

Source
PostTweetShare Share with WhatsApp Share with Messenger
Community Updates
Retailer Offers and Issues
New Comment Subscribe Save for later
20 Comments
13th Jan
Is it important that you make the flight you have booked?
13th Jan

Is it important that you make the flight you have booked?

Hi, Normal operations are continuing, and the airline says: “Flybe continues to provide great service and connectivity for our customers while ensuring they can continue to travel as planned.

I would 100% check before you travel though - can find all contract details here flybe.custhelp.com/app…ask
13th Jan
When Thomas cook went bust the travel agents arranged alternative flights at no extra cost
13th Jan
Argh! Just booked flights with them on Friday
13th Jan

Argh! Just booked flights with them on Friday

Hopefully you paid via credit card

Yip!
13th Jan
I also just booked on Thursday. Debit card. Oh dear, hopefully annual insurance I took out in summer may cover any potential loss? We'll keep toes and fingers crossed. Flight booked to Southampton on 29th Jan to visit my brother, so not the end of the world unlike people who have holiday flights booked and will have to live with the constant stress until return home.
13th Jan
I am flying end of may, but it's by blue Island I think, Flybe third party,do you think I be oke
13th Jan
Protectmyholiday.com (not just for holidays) does airline failure insurance
13th Jan

No. I wouldnt book with them either now so reckon they'll be going under within weeks. Even Thomas Cook denied they were in trouble to keep bookings coming in.
Edited by: "chocci" 13th Jan
13th Jan
Update 1:

Even so, going forward, would you book a flight with them? I know I wouldn't.
15th Jan

Not a chance
4th Mar
Flybe where already struggling before the Coronavirus outbreak but now there's this new virus that we don't know much about people are scared to travel causing many airliners to lose money and for a company with no money to lose like Flybe well they are well and truly screwed.

Hope this isn't another Thomas Cook situation.
4th Mar
Not sure if it already was but Flybe site is down now ‌ flybe.com

According to a few on Twitter the last flight of the evening has landed in Exeter and then they'll be making the announcement.

Such an incredible shame.
5th Mar
due to go to disney paris with them on 20/03/2020 from manchester booked via tui so fingers crossed something gets sorted!
5th Mar

Don't bank on it. I'd be looking for alternative flights/transport.