Another week another high street retailer in administration, this time sadly its the toy and gadget retailer Hawkins Bazaar to be put into administration putting 19 stores and 177 workers at risk.

This isn't the first time the chain has been in trouble in 2011 the retailer closed a majority of its stores and managed to come out, in 2016 the retailer was brought by Merino but in 2018 put up for sale.

Their online store is currently online but only for browsing they have stopped orders and click and collects but all their stores are open with a massive closing down sale which sorta was disguised as its January sales earlier in the month.

The 19 stores at risk are as followed:

With immediate effect the following stores are closed: 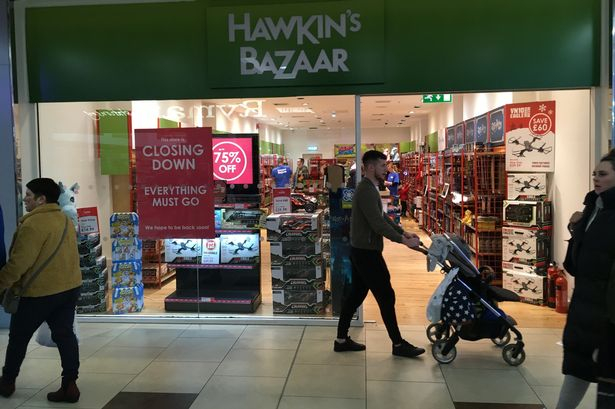 From what I've heard some of these stores have had Closing Down sales starting earlier this week such as the Worcester store, and some stores have already shut since Christmas.

The retailer is popular for its Funko POPs and RC gadgets, and recently tried to get sales up with LEGO but sadly the future of this pretty cool place seems dark.

So far 2020 has seen the demise of Mothercare then both Hawkins and Beales go into administration.
PostTweetShare Share with WhatsApp Share with Messenger
Community Updates
Retailer Offers and Issues
New Comment Subscribe Save for later
36 Comments
24th Jan
Tbh I’ve never heard of it
24th Jan

Tbh I’ve never heard of it

They don't really have many stores anymore, used to have a lot more but closed a lot during their 2011 administration. They are similar to Menkind or Red5
Edited by: "minifig290" 24th Jan
24th Jan
Brick and mortar stores have been going the way of the dodo for a while now. I remember being shocked when virgin megastores shut down over a decade ago. Now a days it's it's not really a surprise when a store shuts. If you work in retail, it time to review your skills and move into something else.

MenKind will be struggling too I expect given they are very similar.

W.H. Smith should be on the way out soon too.
24th Jan

Agree that Menkind are very similar but there stores tend to be much busier than many Hawkins stores. Menkind do a better job at locating their stores in high foot traffic areas unlike Hawkins from what I've seen.

Though disagree that WHSmiths will be gone anytime soon, their travel stores are what keep them afloat.
24th Jan

I noticed some Whsmiths combining with PostOffice. Same with Argos and Sainsburys in certain Towns. Its novel and practical ideas like this that retails need in order to survive....well at least for next 10 years.
Edited by: "AnkerMan" 24th Jan

Just cause they have high traffic doesn't mean high takings!

There must be some kind of market for it but unsure if it could be big enough.
24th Jan
Who?
24th Jan
I'm amazed they lasted as long as they did. They sold mostly tat iirc.
24th Jan
They use to seem like a set up before Xmas and then disappear type store hasn’t been one for few years.. was always worth a look but mainly for a sales bargain
24th Jan

Others have bought me gifts from there in the past, & I have been in the store in Bluewater Shopping Centre, Stone, Kent (postal district of Greenhithe, Dartford) a few years ago, but left empty-handed due to the pricing of the products.

They were probably popular in the run-up to Christmas for novelty/different/unusual presents, but after processing refunds & returns into January, I expect they knew closure was inevitable.
24th Jan
I'm confused a bit with this. The Aberdeen store closed just after Christmas, but there is definitely a store in Dundee. But there's no mention of that branch either on the website, or in the BBC news story?
24th Jan

Ahh your right, looking at BirminghamLive they say that 20 stores are at risk so im assuming that missing one from the BBC article is the Dundee store.
24th Jan

The details about the Dundee branch must have been removed from the site recently.

Within the text on that page is...

So it must have been removed within the last day or so.


PS. The address for that page now just shows the other eighteen "Shops found":

Now I check Hawkins website there is no listing of the Dundee branch so I'm assuming either that store has closed with immediate effect or that store might be owned by another company or they've just forgotten about that store.
24th Jan

Maybe - it was open on my way to work, but I went a different way on the way home. Guess I'll find out on Monday...
24th Jan

It depends on the status of my restraining order.
24th Jan
Bound to happen.
24th Jan

pop up stores for xmas, they used to always put one into SIlverburn in Glasgow but not this year

Im really surprised in the election campaign no one put forward a plan about business rates killing off the high street.

I look at other cities ive been in recently -
Dublin - everything costs a bomb, their streets are full of UK brand shops and hardly an empty store to be seen
Warsaw - at the other end of the scale the place is dirt cheap, wages are low in relation to that but again hardly an empty store to be seen despite a massive Westfield shopping centre 15 mins outside the city centre

I dont get how two extremes seem more vibrant than the UK does and assuming its all down to tax and business rates as I doubt the UK's online shopping fascination is any higher than Dublin's
24th Jan
Sorry to hear but people use stores now to look at products and then buy online.

I bought 3 pre made stockings from the store at Xmas but that was my first purchase in 3 years.

People now browse instore for non essential items and buy online. They'll even pay for expidited delivery which will bring the price above what's instore but that's Jeff Bezos for you.
24th Jan

Not the ones in Dundee and Aberdeen - they've both been/were there for several years.
25th Jan
Used to be really good shops for gadgets and Xmas junk, but went terribly downhill over the last 5 years or so...
25th Jan
My friend has lost her job. The management kept them in the dark and said nothing as they knew before Christmas, so she has to put claim into the government, not good start for her new year
25th Jan

That's awful, tbh most people only knew of their struggles after Christmas, they've kept it in the dark for everyone.
Hope your friend has an easy time finding a new job.
25th Jan

I was of the understanding it was their newspaper delivery network that kept WH Smith going. However, as printed news is dying out they won't have that stream for ever.
25th Jan
Everything is at least 50% off at all Hawkins stores, the Worcester store look particularly bare, all funko are between £3.75 and £7.49, pocket money toys are as low as 27p and even their adult stuff are half price. RCs are also 50% off. Some great bargains to be had.
25th Jan

I think I might have a lead on what's up the Dundee store reading through the Customer Support the company has set up to help customer, staff and suppliers of Hawkins. At the bottom of this page hawkin.com/cus…ice is a little read about the Stores and it says "Most stores are currently open for trading", so probably means that the Dundee store closed when they went into administration.

Though I cannot confirm if it is definitely closed but my best bet is that It more than likely is.

Looking on Google Maps give you this google.co.uk/map…=en
Edited by: "minifig290" 25th Jan
25th Jan
Sadly some stores closed with immediate effect of them entering administration from what I can see.

Plus 1 more store has shut since this thread was written

- Cambridge
27th Jan
Well we had one in chelmsford that's been there for a good few years now in the shopping centre. I bought an item in there before christmas for my son. And its faulty so had to email them. That's when they replied saying the email address was no longer in use. Maybe a lot of people don't use their shop, but because it's in my local town I was unaware they are so sparse.
27th Jan
Well, wandered past the Dundee one this morning. Not only has it closed, but it's also completely stripped of merchandise.
27th Jan

Visited the Worcester store on Saturday and the store was revenged only a few pocket money toys and RCs and surprisingly very few Funko pops. I believe the stores that shut on Friday will have their stocks transferred to the 18 remaining stores along with all the remaining online stock as they have suspended online sales.
29th Jan
Looks like Taunton and Cambridge have both shut since this thread was written according to the Store Locator
31st Jan
EVERYTHING UP TO 70% OFF, Stores are coming up to their last few days of trading quite quick. My best guess is that all stores will be shut by either this Sunday or next Sunday so if your wanting a visit, I'd recommend going this weekend. Before today everything was up to 50% off, so intrested to see what my local has tomorrow.

As of writing these 17 stores are still open but this list is probably going to be inaccurate in the coming days:

(I will be updating you on the events of Hawkins administration until either they are all closed or are saved)
Edited by: "minifig290" 31st Jan
3rd Feb

Do other sources report something different?
3rd Feb
(UPDATE)

According to a few sources all Hawkins stores are now shut.