louiselouise 31
Posted 19th Jan 2021
Query about my mum's new (single) oven. When she had her new kitchen put in (with cheapo appliances which didn't last!) we were surprised to discover the oven she had actually had a 13A plug on it (socket hidden underneath a cabinet).

Connected load is 2700W, 13A (from their website/under Specifications > Full Specs). 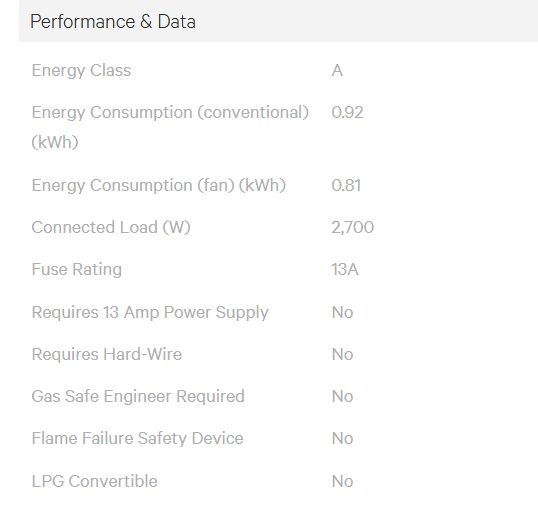 Quickly Googling Screwfix forums says,
"Any single phase (domestic) oven under 2.9kW can be fitted with a 13A plug as long as the manufacturers instructions don't state otherwise. So if your new oven is under 2.9kW and doesn't come with a plug, one can be fitted by a person competent to do so (not necessarily an electrician) and it can then be plugged in"

"Loads of up to 3kW can be fitted with a 13A plug but the recommendation is that this level of load should be placed on a dedicated circuit.
Kettles are rated at 13A (3kW) but only load the circuit for a relatively short time, around 3-4minutes whereas ovens can potentially be switched on for hours and it is not good to load a ring circuit or radial circuit shared with lots of sockets in this way.
It is far better to use the standard cooker circuit that is generally provided in all houses, that is a 32A radial circuit wired in 6mm2 T&E to a 45A double pole cooker switch and then connected on to the appliance.
For convenience you can wire a socket on to this circuit and then plug the appliance in to it or hard wire it, it is not too critical, but I would avoid plugging in the appliance on to your ring circuit"

"The Bosch unit states 16A load so shouldn't be on any 13A circuit anyway. The Stokes doesn't specify current requirement."
(from a query about other ovens)

There is a double socket in a cupboard near where the original oven was installed. Mum has a gas hob installed on top - another wire comes from that and is in one socket - assume for the cooker ignition.

The new oven has a flex which is bare, with Earth, Neutral, Live wires.

Many thanks for your replies. Just want to ensure everything's safe.
PostTweetShare Share with WhatsApp Share with Messenger
Community Updates
Ask