Looking for 10ft trampoline, not for silly money though

15
Posted 16th Apr
Trampolines out of stock everywhere, lol in go for a 10ft for daughters birthday, anyone suggest?
PostTweetShare Share with WhatsApp Share with Messenger
Community Updates
Ask
New Comment Subscribe Save for later
15 Comments
16th Apr
The responses to similar recent requests may be of use...

hotukdeals.com/sea…ine
16th Apr
Keep an eye on Plum's website, looks like they have more stock expected in the next week.

Just fitted one of their 10ft in ground ones, seems an OK piece of kit for the money.
16th Apr
Paid £89 last year from Asda, they have them there every year, Normally after the checkout. They been that price for the last few year
16th Apr
Synths toy store is expecting stock from 27th April on their website(y)
16th Apr

No probs...hope you get one(y)
16th Apr
Mods,let's talk about making a trampoline thread sticky. Over 12 tramp posts in less than 3 weeks. We need to reign this in, the people need a one stop resource for tramp news and deals.
16th Apr

I can't sticky posts, it would keep moving down. A sticky stays on top.
16th Apr

Got this 10ft one from Smyths (smythstoys.com/uk/en-gb/outdoor/trampolines-and-accessories/trampolines/10ft-trampoline-with-safety-net/p/162030) only just a few days before the lockdown.
Took a couple of hours for me and the wife to put together but has proved to be worth its weight in gold in keeping two four year olds and two adults entertained and fit while stuck at home. Highly recommended.
Edited by: "mrcrypto" 16th Apr
16th Apr

Got this 10ft one from Smyths …Got this 10ft one from Smyths (smythstoys.com/uk/en-gb/outdoor/trampolines-and-accessories/trampolines/10ft-trampoline-with-safety-net/p/162030) only just a few days before the lockdown. Took a couple of hours for me and the wife to put together but has proved to be worth its weight in gold in keeping two four year olds and two adults entertained and fit while stuck at home. Highly recommended.

Aye was looking at that one. Had 8ft version for about 4 yrs until it rusted to bits. Did well though. Decent price that for a 10ft
16th Apr

I’d be happy to get four years out of this one. At just over £25 per year a bargain.

Yeah you can pay silly money for them but it was the glowing reviews that sold us on the Smyths one and we weren’t disappointed.

Hope you manage to get one for your daughters birthday.
Edited by: "mrcrypto" 16th Apr
18th Apr

Was it a big job installing the in ground tramp? How did you dig it out and how deep in the middle?
18th Apr

I thought no one would ask

It took me two days over a weekend to do 90% of the work, that was me on my own with a cheap nasty B&Q digging spade and a wheelbarrow. That poor spade has seen more action than it ever should have done. I marked out the circle in Jan but didn't make any progress on it until a few weeks ago.

We had a huge pond in the garden when we first moved in, a long story short I've dug it out and filed it in three times now, the last time I filled it with rubble, slabs and earth so it was a particularly bad dig this time out. Luckily there's no real clay soil in our ground but some psycho had made the pond surround 7 slabs deep in places.

Depth wise, it's meant to be a bowl shape otherwise you won't get much bounce - the mat is aerated but it still needs space underneath.

Hopefully this album gives you a feel for the scale of the project, but given how windy it gets here near the coast, I didn't want an above ground one. Very happy with the quality of the Plum one so far and the way it's put together, though the black plastic retaining wall will inevitably bend.


The only other useful video (that sold it to me) online is this one , once my garden is in a better state and that grass seed grows, I will be doing something similar. 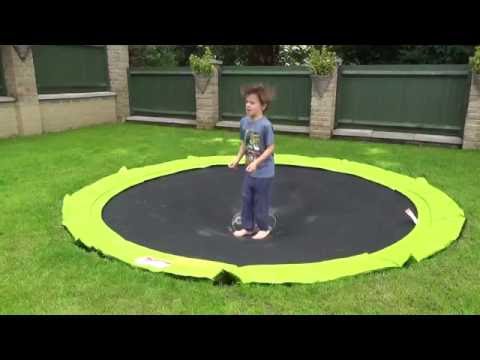 Finally, depth of the 'bowl' - this as a minimum: - I dug ours out more in stages (as you'll see in the rings in the pics), as the video above warns of the issues of bottoming out if you do a gentle slope. At the very bottom, I repurposed some shingle to aid drainage. I would say it's at least a metre deep at the very bottom which was possibly overkill. 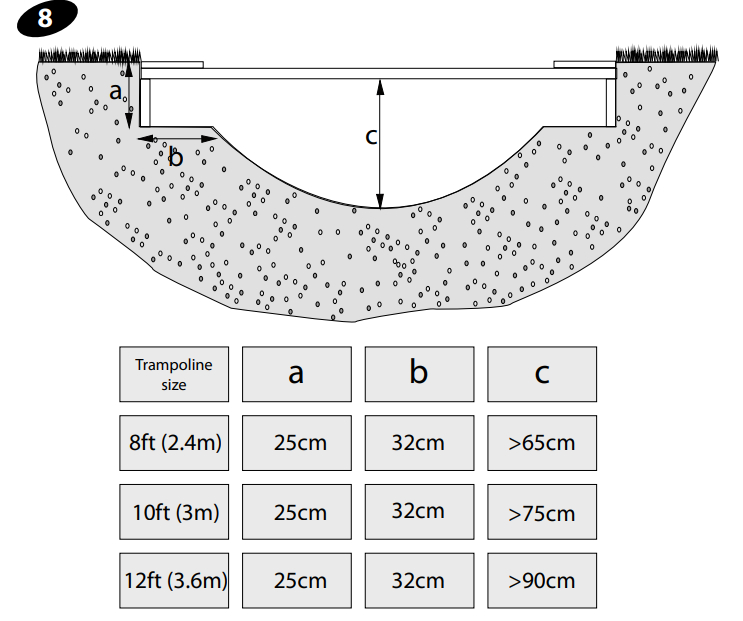 EDIT: It took me most of last bank holiday weekend to level off the surrounding earth - again there were bits of brick buried in there, and I've shoveled up about 2 tonne bags of gravel that had been dumped on top.
Edited by: "Bossworld" 18th Apr
18th Apr
It’s looks great that. Also looks like quite a big job. I would Probably have to have a skip for the soil. Definitely better option to the above ground type I already have, which has seen its day(plumb 10ft also). Sound job especially on your own(highfive)
18th Apr
I desperately need a skip but obviously can't get one at the minute. The pics of the earth don't do it justice but I'd say there's easily 2 or 3 tonnes of soil piled up around the side of the extension at the moment let alone all the bricks and hardcore removed.

Had grand visions of using the soil to re-level the garden but I've actually ended up going further down to ensure it's relatively level to the trampoline.