38
Posted 16th Mar
Sold a camera on eBay over 6 weeks ago.The buyer sent me positive feedback but now the buyer has opened a paypal case against me because she says the camera is not working properly.Its an expensive camera and sold it for £1600.It was working perfectly when I sold it.Only had it for about 4 months.
I’m now worried PayPal will just take the money from me as I’ve heard they can be a bit biased towards buyers.Like I said it worked perfectly but now she’s saying it’s not.Don’t know if she’s dropped it or she just doesn’t know how to use it.So angry
PostTweetShare Share with WhatsApp Share with Messenger
Community Updates
Ask
New Comment Subscribe Save for later
Top comments
16th Mar
Seller have no rights in their eyes.
Though as she’s said not working, rather than not as described you might be ok.
Get her to engage with you via eBay messaging to describe the problem, ideal send a picture illustrating the problem.
Hopefully they hang themselves showing some damage or you can give advice. While also advising you don’t offer a warranty.

I suspect buyers remorse and an excuse to get £1600 back in this precarious time.
38 Comments
16th Mar
Seller have no rights in their eyes.
Though as she’s said not working, rather than not as described you might be ok.
Get her to engage with you via eBay messaging to describe the problem, ideal send a picture illustrating the problem.
Hopefully they hang themselves showing some damage or you can give advice. While also advising you don’t offer a warranty.

I suspect buyers remorse and an excuse to get £1600 back in this precarious time.
16th Mar
It's the risk you run.

Nobody on here knows how to fix it for you, they'll try to to persuade you that they do though.
Edited by: "Erudite" 16th Mar
16th Mar
PayPal does not offer a warranty, PP offers two items of cover: INR and SNAD, none of which would reasonably apply after 6 weeks of item being in buyer's possession, unless buyer could show reasonable and plausible late discovery of SNAD issue.
Regardless, if you are a private seller then no obligations apply other than as described, which buyer may choose to contest directly with you rather than involve any selling platform / payment processor.
16th Mar
All you can do is offer to refund on return of the camera. No point fighting it at this point, PayPal will refund your buyer and chase you for the money even if you close your account.
16th Mar

Really?? So the “process” is a pointless exercise then
16th Mar
You say you had it 4 months, did you buy new or second hand?
If new, send her receipt to claim on the guarantee.
16th Mar

Really?? So the “process” is a pointless exercise then

More or less, with PayPal sellers are on the hook for six months post sale when it comes to disputes, longer for chargebacks. In that time a buyer can make any excuse they want and the seller will be forced to refund. If I were you i'd just accept the return, kill them with kindness and see what they send back. Camera might be fine and you can then re-sell, if you try and resist the buyer might be funny and purposely damage the camera. Either way, you'll have to refund. That why I would never ever sell anything valubale on ebay.
Edited by: "freakstyler" 16th Mar
16th Mar

I did buy it new.I bought it from e infinity which do offer a 1 year warranty so I suppose I can get them to contact them
16th Mar

What puzzles me though is what it states in the “consumer rights act” that you have to return within 30 days? or am I missing something
16th Mar

Did you sell the camera as a business?
16th Mar
Give PayPal a call and discuss directly
16th Mar

Did you sell the camera as a business?

No it was just one which I used as a hobby for a short time
16th Mar
e-infinity get really good reviews. Another option may be to tell them to send it back to you and you will sort it out with e-infinty and return it to them fully repaired. At the very least you might establish whether it's buyer's remorse. If you sold it for a good price they should be happy to have the problem sorted out by the vendor/manufacturer.
16th Mar

Private seller then, so not subject to business consumer legislation.
16th Mar
You accepted paypal...

Which means the buyer effectively has 6 months warranty on the camera.
16th Mar

Think you might be mixing up consumer rights when dealing with a business, I don't think they apply to private sellers.

As I said before, I wouldn't try and fight this for the risk of a vindictive buyer sabotaging the camera. As others have said it could be a case of buyer remorse and the camera is perfectly fine, in that case you can re-sell annoying as it might be. As far as i'm aware there is no real way to stop this short of closing your PayPal account and running the risk of a bottom feeder DCA chasing you for the £1600, given the high amount I suspect they will chase you.
16th Mar

No I will never stoop as low to close my account and run.The buyer seems very nice and genuine too when I was negotiating a price which is reassuring.What I’ll do is get the camera sent off to E infinity and go from there
16th Mar

Repeat: PP does not provide warranty. If the seller states or implies that the issue was not present on receipt, you can simply quote PayPal's own t&c to PayPal to have any case found in your favour. Some sellers invite the buyer to confirm the issue, coercing some phrase similar to "it worked fine for a week but is now does not work" which is clearly a warranty issue and not covered by PP, although it can be difficult to coerce a realisticly useful phrase from the buyer without showing your reasoning behind the question and so jeopardising the favourable response.
16th Mar

PayPal does not provide nor support warranty.
16th Mar

PayPal does not provide nor support warranty.

When I say "warranty" I'm referring to clued up PayPal users that know full well if they open a case stating "faulty" or "not as described" results in a pretty much guaranteed refund.

Thus= 6 months warranty
16th Mar
I wonder if they ebay buyer could just contact the retailer 'by being you' type of thing (as warranty isnt transferable) send a copy of the receipt etc and so they can deal directly with each other and you just step out of the picture? unsure what the implications are if you tell the retailer that you've given the camera to the other person as a present.. maybe they can then register her as the owner? just an idea..
16th Mar

Any SNAD claim at example month 6 of possession is a delicate concept to present as credible.
16th Mar

Credible from PayPals point of view. They made the 6 month rule. It should be 14 days IMO.

I don't think buyers need to elaborate as to why they are opening a SNAD 5 months down the line. If they needed an excuse I'm sure a simple one such as being abroad during the delivery time would be enough.
16th Mar

Circumstances would be lumped into the credibility pot, including history of any PP-funded purchases / claims post purchase of problematic item.
16th Mar

I don't think PayPal care too much about previous claims. PayPal bend over backwards for buyers. Example: I had my own website once, sold an item and buyer opened a case to say its not as described (missing a item apparently) the "missing item" was listed separately on the website and zero mention of it being included with the item he bought. I spoke to PayPal and showed them proof, they said I must keep him happy. In the end PayPal refunded him 29.99£ out of their pocket so he could purchase the additional item from my website. Most of these scam buyers have done these kind of tricks before, no doubt about it.
Edited by: "J4GG4" 16th Mar
16th Mar
Easy one, seller as no rights
16th Mar
Be prepared to take legal action
16th Mar

That example is SNAD from this thread issue . OPs buyer has already implied the item was acceptable by leaving positive feedback. Possibly not appropriate for OP to quote the buyer's specific reason behind their buyer's claim, but any hint at a potentially warranty-based issue may at an appropriate time be addressed by quoting PayPal's non-warranty terms to PayPal.
16th Mar
PayPal will refund the buyer once they prove postage.
Its disgusting.
Edited by: "yozzman1234" 16th Mar
16th Mar
Tell her once you get it back and you verify the hidden markings you put on each piece in order to ascertain she has returned the exact item you sent, you will be happy to refund. It’s amazing how many people give up on the refund of technology when I say this.
16th Mar
Watch this, don’t know how they stayed so calm: 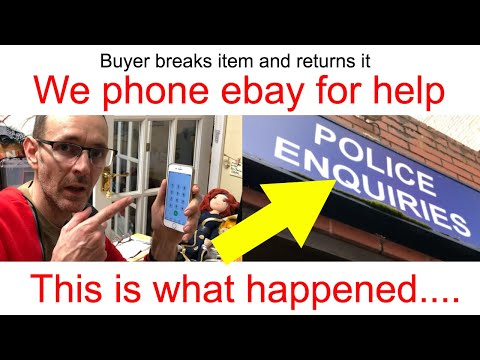 Watch this, don’t know how they stayed so calm: [Video]

I wish I hadn't watched that. God, I despise ebay.
16th Mar

Watch this, don’t know how they stayed so calm: [Video]

Wow!!
That has REALLY opened my eyes.In the case of my camera then the buyer could have used it to hammer some nails in,sent it back in pieces and got a full refund.I now know why more and more people are ditching eBay and using alternatives.Thanks for showing me this.Its certainly made me consider never using eBay again
16th Mar

The real tragedy in that YT vid is the buyer and seller may both be victims. Some permutations for source of damage include transit damage both ways (although unlikely); or damage caused during fitting but not declared to buyer; or damage caused by impact unknown to buyer (car park incident, etc), all of which are plausible to a casual buyer who has zero knowledge / understanding of or in vehicle parts nor their function.
Would be interesting to know how the business seller would have handled the same return if the business seller had sold direct from any business website, and if the same outcome would be legally required and / or if there are any viable post-refund recovery options.
Regardless: greater world issues at present.

Note that your case has progressed beyond EBP and is now with less buyer-tolerant PP.
16th Mar

I wish I hadn't watched that. God, I despise ebay.

Me three, What an absolute shambles. Pleased I'm not a business on there.
16th Mar

Me three, What an absolute shambles. Pleased I'm not a business on there.

Never thought of that.There must be plenty of sellers who use the eBay platform for their income and have lost plenty of money because of their appalling policies
16th Mar

Absolutely, Great for the buyer though and scammers etc..