4
Posted 13th Sep
Not really a deal but out of stock most places so thought I'd post incase someone was looking. I pre-ordered. A similar deal I posted for the Scorponok Titan class from Amazom was a similar scenario and looks like that's coming through from early October. Not long had an email from them confirming so fingers crossed COVID doesn't mess this up

Build the ultimate battlefield with Siege figures. Siege plunges fans into the epic fight to survive on the final day of the Autobot and Decepticon battle to control Cybertron. As the Autobot counter-resistance takes on the Decepticon resistance army, the unyielding Autobot army captain and city defender, Omega Supreme, lies in wait – the Autobots’ last line of defence.

My Devastator is damaged from light play. It still builds, but falls apart easily. Bit crappy quality given how expensive it was.

Missed out on Metroplex twice. And now it goes for too much for a toy that I’d want to use, not just shove on a shelf.

Going to look into getting this one.
Edited by: "PAISAL" 13th Sep
13th Sep

I've heard that devastator has some keys failings in design which is why although tempted I couldnt bring myself to get it for my 7yr old. Check out this reviews on 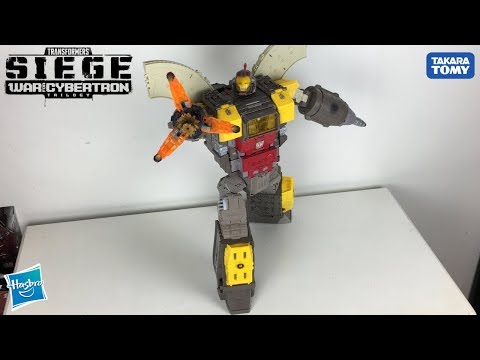 ...looks like a solid piece of kit. My boy thinks we can't get them which we can't so hoping this comes through. Scorponok is hopefully arriving October 2nd according to Amazon's email and I picked that up for £110 if all goes to plan.

I had metroplex as a child of the 80s. Awesome toy but not that big from what I remember.
13th Sep
Devastator was a bit disappointing. The 6 stunticons are not that impressive in robot mode. A bit flimsy, and awkward dimensions that made them difficult to pose and play with. One of them had very loose joints. They were a bit better in vehicle mode.

But when you build it into Devastator, it looks amazing. Really imposing. Just a nice big transformer. And it’s good fun building the other combiners (that are dwarfed by him) to try and take him down. And the Combiner Wars mini Shockwave transforms into a gun for him!

Just a massive shame it started breaking after a handful of builds, and very careful play. And now you just have to look at it funny and it collapses.

Having said that, if I could find it again at a reasonable price, I’d get it just to leave one in permanent Devastator mode. I remember paying around £180 for it. Wouldn’t pay anywhere near that much for it though knowing what it’s like now.

Combiner Wars Metroplex is massive. Would love it, prices were ridiculous on it though last time I checked.

This Omega Supreme looks superb though.

Edit: Just seen a few KO Combiner Wars Devastators on eBay for £45, described as “average quality, not for collectors”. Tempted. Might be able to use it to salvage parts.
Edited by: "PAISAL" 13th Sep
13th Sep
Devastator is the cheese man. Remember him in Transformers the movie (80s) just remember thinking as a kid wow wish I could get that. Shame this version turned out so flimsy. For the money you spend that's just not on really. When i was a kid I ended up with the stunticons all of them and a few aerial Bots not enough to make Superion think that's right.

Also forgot to say Smyths don't take money on pre order. Well they didn't for me anyway. You can cancel if you change your mind.
Edited by: "blabla2013" 13th Sep