40
Posted 20th Mar
people saying to void the Premier league and people saying to give liverpool the title now really make me mad the season is on hold and when its ready and only when its ready to resume from were we left off and carry on. we deffo going to win it and to given it now in my opinion with all this going on will feel wrong and not feel like its been won i want to win it when its back and the country is back on track. 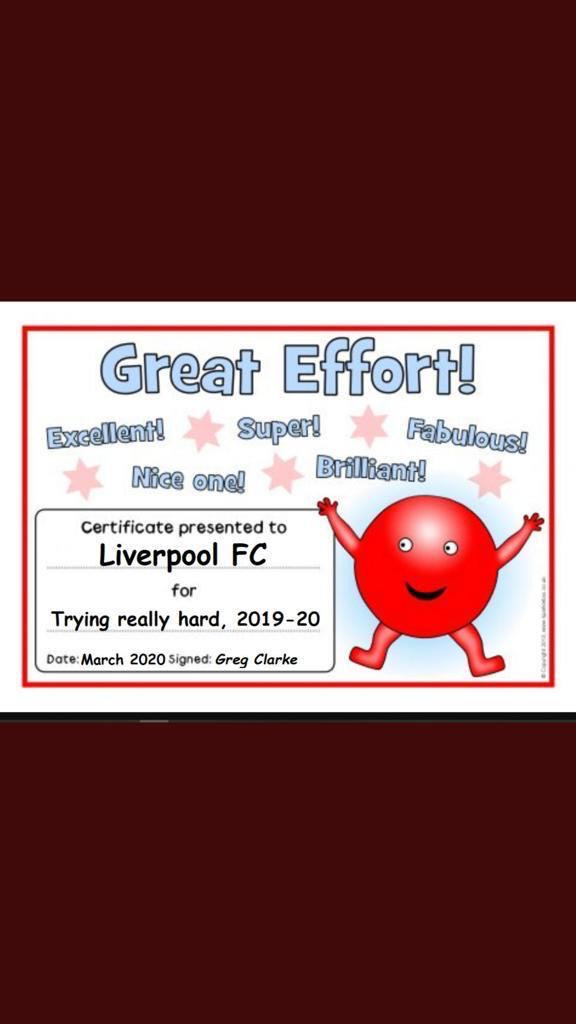 What position do you play as I don't recall any Kev's on the team sheets this year.
40 Comments
20th Mar

20th Mar
Void
20th Mar
Should 100% be void. Whats the point now? It'll be playing in empty stadiums etc.. Football is supposed to be for the fans etc..

When they restart it'll be like the start of the season again but potentially without fans.

Don't think that's my opinion because I support United. We stand to potentially lose out by voiding the season too etc..

No European competitions next season would solve the who qualifies dilema etc..
Edited by: ".MUFC." 20th Mar
20th Mar
"We" ?

What position do you play as I don't recall any Kev's on the team sheets this year.
20th Mar
already confirmed it will resume in May
20th Mar
There are provisional dates in May but they’re more in hope than practical . Void the season and start afresh in August !
20th Mar
As there is no euros , premier league can continue whenever its safe to do so . This decision was made yesterday , under earlier law it has to be completed by beginning of June but this season they have made an exception
Edited by: "saeed2810" 20th Mar
20th Mar

already confirmed it will resume in May

If we were only a few months into the season I would agree but we're over 3/4 of the way through. If teams have to play in front of empty stadiums so be it, it's far from ideal but still better than throwing away the bulk of the season. It's not just Liverpool who would be big losers too, Sheffield United are having their best season since the 70s and it could turn into their best seasons for over 100 years, Wolves could very easily have their best season since the 50s and Leicester are virtually nailed on for a champions league place, proving they're not 1 season wonders. On top of that there's the promotion race in the lower divisions, Leeds looking like they'll be back in the Prem after nearly 20 years away with Preston and Brentofrd both in with a shout of their first top flight season for over 50 year.

I don't believe that for a second, if Man U were running away with league there's no way you'd be saying that. There's a very real chance you could miss out on a CL place this season which pretty much every Man U fan would regard as a poor season. Along with Arsenal, Spurs and the clubs fighting relegation, you're one of the clubs who would benefit most from the whole thing being voided.
20th Mar

We wouldn't benefit from anything if European competitions were cancelled next season.

Another option that I would be in favour of is delay restarting the league until after spectators are allowed to attend. Also don't rule out potentially delaying the start of next season with a few competitions dropped if needed. Obviously that may cause a few hiccups with players contracts etc.. but I would hope the players and clubs would agree to extend players contracts until at least the season had completed etc..

I'm totally against the idea of just dishing out trophies, relegating or promoting teams etc.. It just isn't fair on everyone.
20th Mar
I'm a Liverpool supporter, but what happens is not just about Liverpool. Voiding is just not an option, the season must be completed so to be fair for every team, at the top and bottom, for those fighting relegation or promotion. If next season must be cancelled, then so be it.

What happens with next season all depends on how long this goes on for, but there are numerous options including cancelling other competitions, shortening the season. If this dragged on for a long time I'd personally cancel the next season and maybe do something like a 1 off champions league style competition (split the leagues into 4-5 groups).

Whatever happens next year is still too early to say, but I think everyone in the game have already agreed this season will be completed.
20th Mar
Let's not care about people dying or losing their jobs, the show must go on because liverpool are desperate for a trophy.
20th Mar

The detrimental effect to you of voiding the season would be less than for the majority of other clubs in the Premier league so in comparison to your major rivals you would benefit. Due to the amount of money involved the only way I can see European competitions being cancelled entirely next season is if the situation is that bad that all professional league football is cancelled too which renders the discussion meaningless anyway.

On that I agree.

If there's a delay to starting the 20/21 season I can see the league cup being cancelled for one season to free up midweek matchdays, cancelling international friendlies should release a few extra slots too. Another sensible option (which probably won't happen due to the money involved) is to make the Champions and Europa leagues straight knockout competitions for one season only which gives you another 4 free matchdays due to replacing 6 group matches with a 2 legged knockout tie. If you add those together, you could potentially start the season as late as October and still complete it by the end of May.

Agree with that too, stopping the season now with European and relegation places based on current positions (which I have seen suggested) is the one option even worse voiding the season.
Edited by: "spoo" 20th Mar
20th Mar

what a ridiculous message. so no one is allowed to talk about anything else.
20th Mar
Should be voided now and start next season on time. They were lucky to be in the position they were in so they can't really complain.
20th Mar
Definitely void, just wipe this year from the records, no promotions and no relegations. Fairest thing really.
20th Mar

I'm pleased there are a few options and completed the season is my second choice so long as we have spectators. Football without fans isn't an option imo.
20th Mar
There won’t be time to play it out so ditch it, we go again in august with the slate cleaned
20th Mar
i think all the void are tung n cheek but if you really think that them you shud be watching a team in the msl were the winner cant win the league and no one gets relegated
Edited by: "kevlfc" 20th Mar
20th Mar
I’m a supporter of a non league team that have been top all season and looking like the national league is happening. Just the way it goes, not tongue in cheek. We are on shutdown, we can’t be completing the season at all costs, just take a break and we all go again next season.
20th Mar
Doesn’t matter what the record books show as Liverpool are the champions this season.
If they only had a mere ten point lead then you could argue they could have been caught.
But the lead is so large and City are too inconsistent so it’s a done deal.

In decades to come when mankind is living in underground bunkers it will come up at quiz night.
Who were the best squad to never formally win the title?
20th Mar

It would be strange for the players, but it is mainly watched and paid for by TV viewers.
20th Mar

In 20 years time the records will just say 'season voided due to pandemic', not 'season voided but Liverpool would probably have won it'.
20th Mar
to void it is like playing champ manager and getting beat and not saveing it and loading it again.
20th Mar

What if all the Liverpool players caught Corona and died, They could lose every game, City could win every game. We just don't know. Yes it's unlikely but stranger things have happened.
20th Mar

It's not though is it, I mean not really?
20th Mar

That's what I like about you. A glass half full kinda guy ‌
20th Mar

That's what I like about you. A glass half full kinda guy

Not winning the title will make this squad even more legendary though.
In 20 years time they will be remembered more than the teams that actually won the title recently.
Whereas City risk becoming like Michael Schumacher; tainted by cheating.
20th Mar
season on pause and when its SAFE finish what was allready started. so if the championship league was restart and lfc won it there wud be murder
20th Mar

That will be overturned soon. They haven't done anything wrong. False accusations and with David Gill on the committee they were dead and buried from the off.
20th Mar

Already been found guilty once so even if they get off this one their legacy still risks being tainted.
20th Mar
I don't think there's any chance that LFC will be denied the title one way or another.
20th Mar

Can you name the winning horse from the voided grand national? Without googling, same for Liverpool in 20 years.
Edited by: "pinkleponkle" 20th Mar
20th Mar

Worse than this, why ruin two seasons to for the closure of the current one? Just void it and start again!
20th Mar

And use last seasons standings to decide CL/EL places?

Yes. I think this is the only way forward.
20th Mar

Yes. I think this is the only way forward.

I'd be happy with that tbh, It's fair and logical.
20th Mar
Whatever they do they need to stop relegation's & promotions if the season isnt completed.