Some help with sorting a rediculous situation with Zavvi.......please!

35
Posted 2nd Jan
Ok so this is a bit complex, but my hate for zavvi has peaked....... even though I'm no longer a customer!
In December 2016, yes 2016, I ordered a black series stormtrooper from them , and then another 2 days later (they were cheap), at this point they were awaiting stock.
Whilst this was happening they were in Argos for the same price, so I bought one.

I tried to cancel the ones from Zavvi , but 1 had been dispatched and they could only cancel 1 of them. Never mind I thought, i'll keep one as an investment. It arrived, the other was cancelled, all good........or so I thought!

Today, 3 years later i get 2 emails from Zavvi (I haven't had an account with them for 2 years) that the stormtrooper helmets will be with me by 30 Jan. Now the weird thing is the order numbers are completely different from the original, barring the last 2 digits, which match both original orders, and of course the same item.

I tried to contact Zavvi..... it won't take my email and password, so I try to reset it, then it says the email isn't recognised, even though they just sent me 2 order confirmations!!! wtf!

So, with no way to contact them or access my account, I'm stuck.
Called the bank, they said wait til they take money - same as paypal said.

Anyone have any ideas? I'm so angry. I closed my account due to similar 'take order, don't even have goods to sell' scenario - useless company.
PostTweetShare Share with WhatsApp Share with Messenger
Community Updates
Ask
New Comment Subscribe Save for later
35 Comments
2nd Jan
Have you tried contacting support? They should be able to look up the order based on the information in the new emails.
Sounds like a glitch in their system or someone is using your old account.
2nd Jan
"Zavvi issues any good reports?" ( @kobrakaan )
"Zavvi" ( @Gianluca_Cancio )
2nd Jan

That's what I said above, I can't. If I could, I would have already. You can't contact them at all unless through your account.
If I set up another account just to contact them it's going to get confusing.
Edited by: "Stormpooper" 2nd Jan
2nd Jan
Phone them and explain the situation if possible without an account but with the order numbers
2nd Jan

They have no phone number.
2nd Jan
is writing a letter an option?
2nd Jan
Just to clarify - there is no way to contact them which is why I posted this, in hope someone may know another route.

No phone number, no web chat, no email, no account to contact them through. Nothing.
2nd Jan
or maybe use twitter?
2nd Jan
try contacting them by twitter - i found they are the quickest to reply
2nd Jan

There is an address in here
zavvi.com/art…ist
2nd Jan

I don't use it. Though I may have to it looks like.
Both the bank and Paypal advised me to just wait until money is taken, then they can act, but only then. Since it's been 3 years they said I'd have nothing to worry about, but knowing Zavvi, and how hard it is wrangling with them, I can see a car crash upcoming.
2nd Jan

Thank you.
2nd Jan
Just make a new account and contact them via that, explaining why, can't see how that's particularly confusing.
2nd Jan

The bank and Paypal have given good advice. Do some research on "chargeback" in the meantime to really put your mind at rest.
2nd Jan
Just googled contact number and it didn't bring one up however its given a few options for contacting them
zavvi.com/hel…ist
2nd Jan
I just had an email from Zavvi about the regular white Black Series Stormtrooper helmet still being unavailable, however I’m sure that I cancelled my order for it about 6 months ago. I wouldn’t even order any of that kind of stuff from them now, it seems that they take orders on products that they aren’t even sure that they will ever have in stock again.
Edited by: "Haircut_100" 2nd Jan
2nd Jan
I wouldn’t worry, OP. If you can’t see a pending payment to Zavvi on your Paypal account then they can’t charge it. (I’m assuming you paid via Paypal based on what you have said above). I thought retailers have 30 days to charge a Paypal account anyway so it shouldn’t get authorised after 3 years.
2nd Jan

Your order is/was accepted by "The Hut.com Limited (trading as www.zavvi.com) whose registered office is at 5th Floor, Voyager House, Chicago Avenue, Manchester Airport M90 3DQ." Registered offices are always the most obvious recipient addresses for formal communications.
zavvi.com/art…ist
2nd Jan
This is the address to use to write to them plus a link to live chat:

That's weird it has disappeared! I went onto both Help and Contact Us (can't remember which one) and scrolled down to find where it said 'Write to Us'. Then slightly further down the page it had a link for Chat.

Edited by: "JimboParrot" 2nd Jan
2nd Jan
Thank you for all your kind input! it is most appreciated.
I have written them a proper letter and sent it to -

Complaints
If you are not satisfied with the way in which we have handled the return or replacement of any item, we want to hear about this. Our aim is to resolve the matter for you and ask that you please contact our customer service representatives via your account or by post at Customer Service Department, Zavvi, Meridian House, Gadbrook Way, Gadbrook Park, Rudheath, Northwich, Cheshire, UK, CW9 7RA.
2nd Jan

Under contact us there is live chat as well as social media links....
2nd Jan

So you are in the same boat, but presumably you can go into your account and see? maybe even cancel?
I HOPE it's a computer glitch.........
I'm not worried about being covered by the bank/paypal so much as if they turn up how to return them, and who will pay for it..... as it is I can't even actually talk to them lol! and, to be fair - I wouldn't believe a word they said if I could actually talk to them!
2nd Jan

Under contact us there is live chat as well as social media links....

It doesn't work - the live chat, ever - i'm not sure it ever has
I don't do any social media, and I'm not signing up just to contact them (and I shouldn't have to)
Edited by: "Stormpooper" 2nd Jan
2nd Jan

Thanks for the reassurance, the bank and Paypal said similar - unauthorised charges (since it was 3 years ago)
2nd Jan
Try Facebook messenger or Twitter, most companies will reply to both.
I've had a lot of help through Facebook's messenger on the companies pages
2nd Jan

It was actually from Geekbox (which seems to be the collectibles and loot crate branch of Zavvi. I’ve looked at my order history and the Stormtrooper helmet shows as being a cancelled order from June, and Paypal shows that I received a refund from them at that time. Id just put this recent email from them down to a glitch in the system and not worry about it.
2nd Jan

I signed up with twitter specifically to do it lol let's see what happens
2nd Jan
What are items value? Have you considered cancelling associated payment card? Too drastic?
2nd Jan

I already tried that number earlier. Just beeps continuously. Thank for the info anyway
2nd Jan
Hi I read your post then noticed I also have same email from Zavvi. I still have account so logged in and the reference relates to an order I placed in Sept 16 but I cancelled it and bought it elsewhere. On my account page it shows it's status as cancelled but I still got email. I reckon this is a system blip and don't think they'll be dispatched.
4th Jan

Did you receive an email from Zavvi today explaining that they sent out a bunch of emails by mistake and not to worry about them? 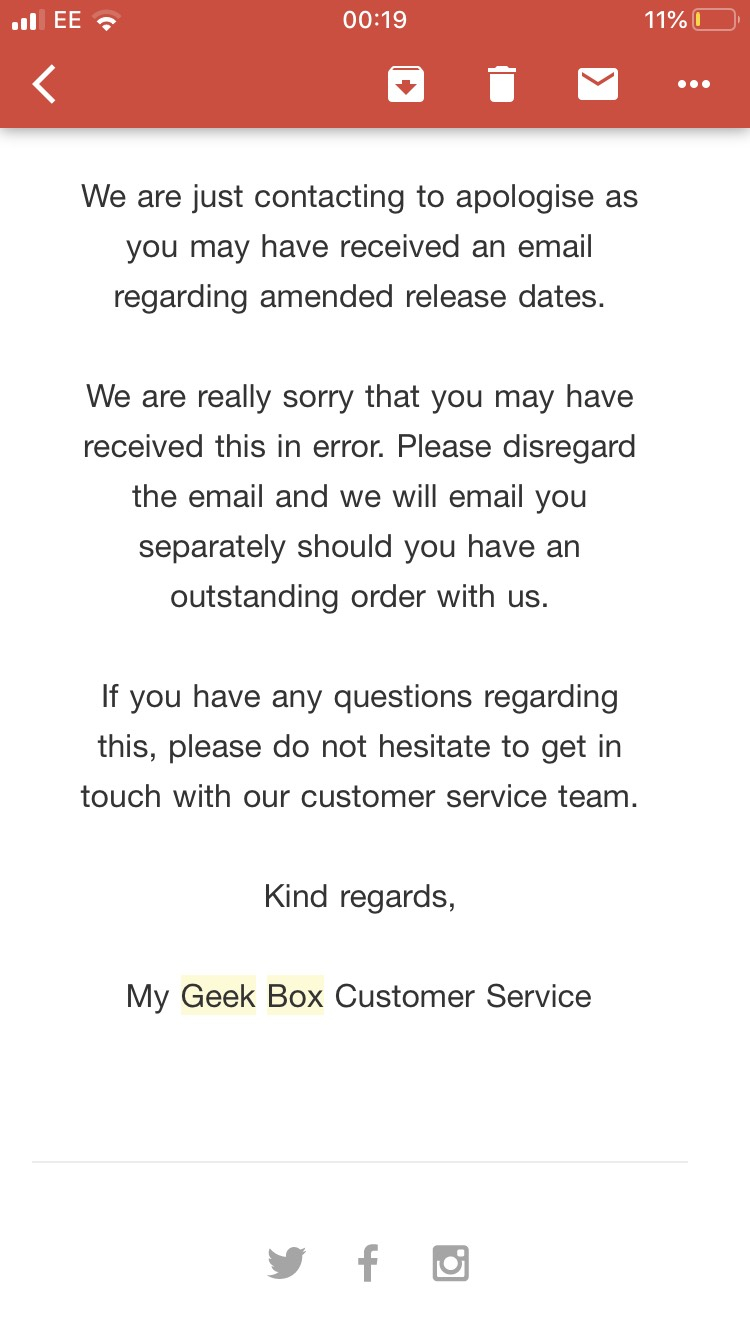 Yes I did. Thankfully.