Stream FREE Pokémon Movies inc. 'I Choose You!', 'Hoopa and the Clash of Ages' & 'Volcanion and the Mechanical Marvel' @ Pokémon TV

4
Posted 11th Jul
3 new movies have been added to Pokémon TV as of last night which are available to stream for free (usually cost £3.49 each to rent) - could be useful for anyone who has any young Pokemon fans looking to pass the time. 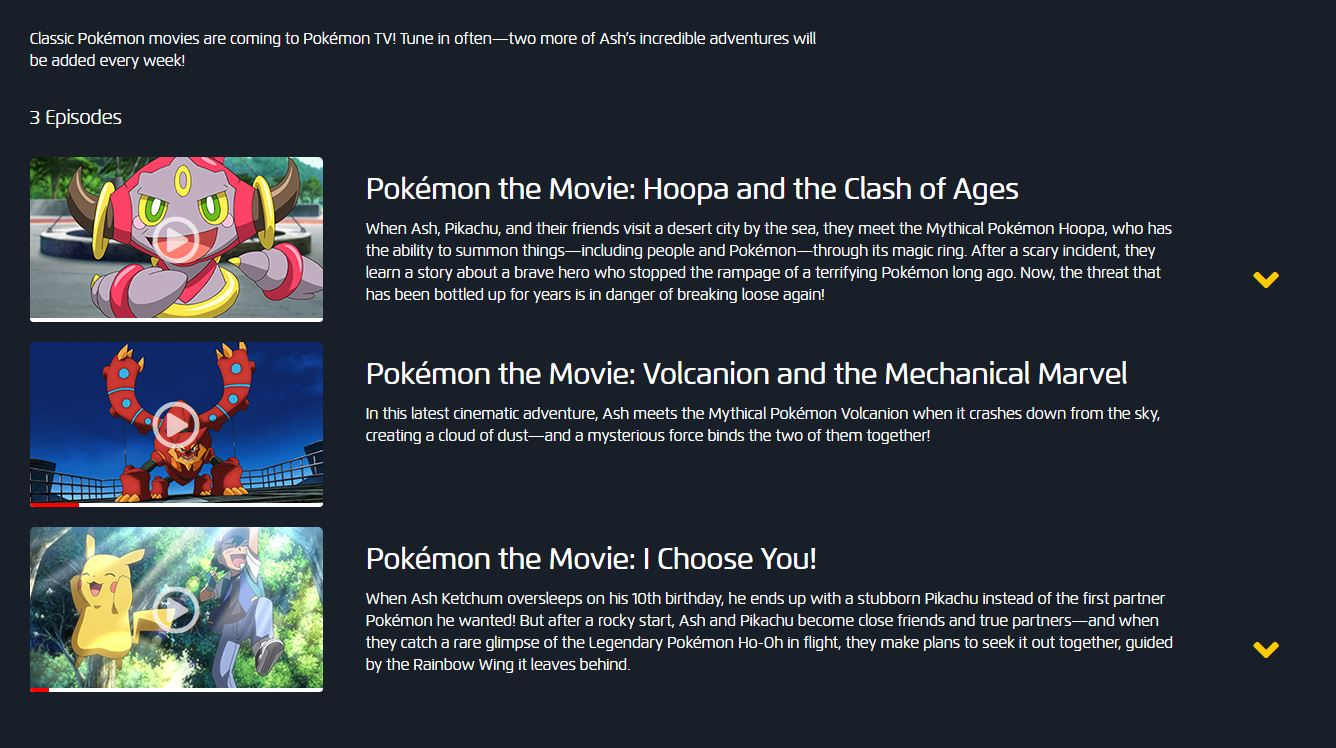 When Ash Ketchum oversleeps on his 10th birthday, he ends up with a stubborn Pikachu instead of the first partner Pokémon he wanted! But after a rocky start, Ash and Pikachu become close friends and true partners—and when they catch a rare glimpse of the Legendary Pokémon Ho-Oh in flight, they make plans to seek it out together, guided by the Rainbow Wing it leaves behind.

In a desert city by the sea, Ash, Pikachu, and their friends meet the Mythical Pokémon Hoopa, who can summon all sorts of things—including people and Pokémon—through its magic rings. The little Mischief Pokémon likes to use this talent to play harmless tricks on people…but when its true power is released, it loses control and becomes the towering and terrifying Hoopa Unbound! Long ago, a brave hero stopped its rampage by confining its power in a special bottle. Now that the bottle has been rediscovered, Hoopa must confront its greatest fear! Can Ash help his new friend overcome the darkness within—or will this dangerous struggle erupt into a clash of legends?


Pokémon the Movie: Volcanion and the Mechanical Marvel (2016)

Ash meets the Mythical Pokémon Volcanion when it crashes down from the sky, creating a cloud of dust—and a mysterious force binds the two of them together! Volcanion despises humans and tries to get away, but it’s forced to drag Ash along as it continues its rescue mission.

They arrive in a city of cogs and gears, where a corrupt official has stolen the ultimate invention: the Artificial Pokémon Magearna, created 500 years ago. He plans to use its mysterious power to take control of this mechanical kingdom! Can Ash and Volcanion work together to rescue Magearna? One of the greatest battles in Pokémon history is about to unfold!
PostTweetShare Share with WhatsApp Share with Messenger
Community Updates
Misc
New Comment SubscribeSave for later
4 Comments
11th Jul
Nice one bro.the kids are out at the moment but on their return I am sure they will watch these.heat added.
11th Jul

No problem mate - hope they have fun watching!
11th Jul
Great thanks! Son was just complaining he was bored
11th Jul
Good deal @merb0786 this will keep alot of kids entertained
Heat