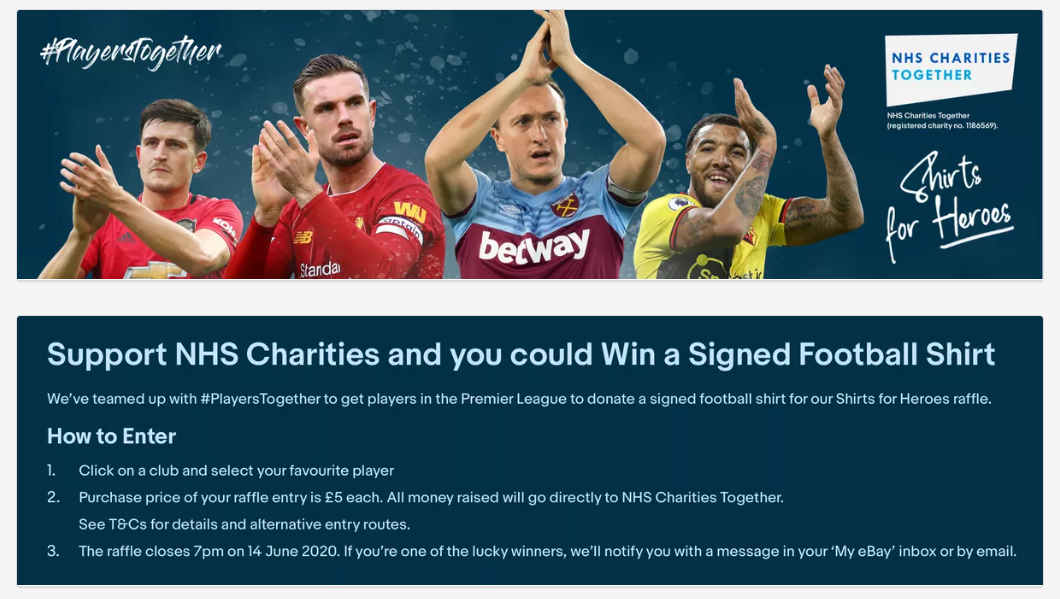 Premier League stars are to host the largest signed shirt raffle in this history of football as part of their #PlayersTogether initiative to fight the Covid-19 pandemic.

Footballers from all 20 top-flight clubs came together independently of other organisations to launch the campaign in partnership with NHS Charities Together last month, and were subsequently joined by members of the England women's national side.

The Shirts For Heroes raffle will feature signed jerseys from 500 Premier League players, with all proceeds going to the umbrella organisation which covers more than 200 NHS charities.


Fans will be able to buy tickets for the raffle, which opens on Ebay at 7pm BST on Wednesday, June 3, for just £5 each.

A statement from #PlayersTogether said: "As players, we have been determined as a group to help in any way we can. That’s why we established #PlayersTogether to raise much needed funds for front line carers through NHS Charities Together.

This is a player led-initiative, working together collaboratively across all clubs and we are delighted to team up with eBay to offer our signed shirts in the Shirts for Heroes campaign. We hope this is something all fans up and down the country can get involved in and help us raise money to make a difference for the real heroes of this crisis.”
EBay DealsEBay discount codeMisc
New Comment SubscribeSave for later
2 Comments
3rd Jun
I actually tried this earlier , it’s actually quite a chore

you can’t use the app
and when you go to the website, and click the item
it takes you to the app
4th Jun
PR exercise