12
Posted 30th Jan
Hi all
Last week I signed up for BTs fibre broadband offer via Top Cashback. I signed up especially to claim it. I wrote the password down and firefox also saved it. I logged into the site later on, either later that day or the day after and i could see the £70 or so cashback had been acknowledged. The day after I tried to log in and the site wouldn't let me in. I tried the password prompt but got no email back. I have now logged a support call but they have replied that they cannot take it any further unless i send them my photo ID.
No other websites have ever asked it of me.
Has anyone else had this? I don't really want to be sending photo ID over the internet to who knows where. I don't like being ripped off either.
PostTweetShare Share with WhatsApp Share with Messenger
Community Updates
Ask
New Comment Subscribe Save for later
12 Comments
30th Jan
If its through their support ticket then shouldn't be an issue.
30th Jan
is your issue with topcashback or BT?
30th Jan
I think if you look at the terms it might say you need an authorised attached bank account to claim the cashback on services like BT & NPower etc.
Quidco certainly do & if you haven't got this then they will ask for further details. Too many fraudsters about.
30th Jan

If its through their support ticket then shouldn't be an issue.

Why not? Its still some unknown getting my ID. Why on earth do they need it? I sent them the welcome emails. I just want to get into my account.

Well I hadn't put my bank details in fortunately but the thought that some scamp had pinched my account so he could claim the cashback himself had crossed my mind.
30th Jan

No one has stole your account. The reason they do it is because people steal off of them.
30th Jan

I think if you prove your ID/Bank Account you will get it. It is not uncommon. Loads of people (even some on this site) used to defraud/take advantage of the cashback sites. If you call them up & offer a copy of your Council Tax or a Utility Bill they will probably be ok with it.

But you won't get cashback for at least 3 or 4 months in any case. You need to read the Terms & Conditions of the deal. No one is conning you & it is not unusual for a new member to be asked for full information. If they have your bank details then how are you going to commit fraud without there being a trace?
30th Jan
Submit your passport, but redact all personal information they do not already have, and tag it as exclusively for the stated purpose. Like this: 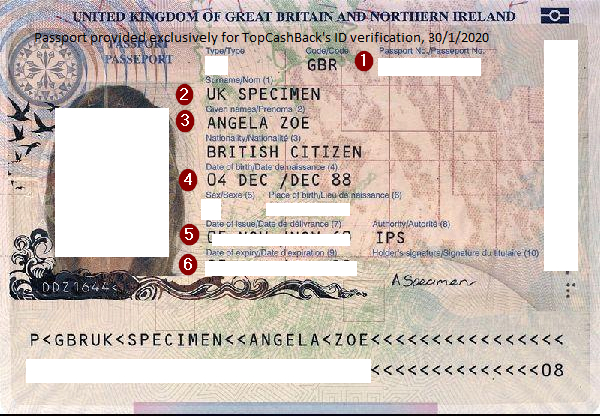 30th Jan
you always need a bank account when you set up the account. how else are you going to claim the cashback. it also helps them to determine if someone is creating duplicate accounts as you would need more than one bank account to do that.

i suspect they have locked your account because they think you have created a duplicate account to claim the cashback, although i don't think it applies to the offer that you are referring to. as you didn't submit your bank account when you opened the account, it has probably been flagged up as duplicate.

they want to see your ID to prove that it is a legitimate account and not a duplicate one. a tracked transaction does not necessarily mean it will pay out anyway.
31st Jan

If its through their support ticket then shouldn't be an issue.

Cheers. I'll do that. I'm a little unsure about it as in the 20 years I've been online I've never had to send photo ID to prove identify to get my website password back.
31st Jan
Sounds like a scam . That's what security questions are for .