Will Three force me to "upgrade" or increase price?

25
Posted 18th Dec 2019
I am on SIM only deal for a fairly reasonable price. Got a few texts saying that my contract is due to end and I can renew it but it will be £18 a month when I talked to them. This is way more than what I'm paying. They say I'm on an old contract hence I got the deal at the time. I told them not to change anything and I'll think about it. Can they actually do this? Increase the price by about £8 or more? I spoke to them again and another person said to ignore texts it will just go on a rolling contract if I don't renew.
PostTweetShare Share with WhatsApp Share with Messenger
Community Updates
Ask
New Comment Subscribe Save for later
25 Comments
18th Dec 2019
If you're out of contract they can do what they like. What was your deal?
18th Dec 2019

If you're out of contract they can do what they like. What was your deal?

It was £9.23 a month for unlimited everything... The second person I spoke to said to ignore the texts everything will stay same and will continue as a rolling contract. . The first person wanted to put me on a new contract.
18th Dec 2019
I work for three, they won’t change your price unless you upgrade
And is it an essential plan that you have??
Edited by: "Taha_Omar" 18th Dec 2019
18th Dec 2019

There is no point to upgrade as I have unlimited but they still wanted to try put me on new contract which I said I'd think about. But asked them not to change anything. Not sure if it's essential or not.
18th Dec 2019

What abut when they kicked everyone off the U/L U/L U/L plans unless they paid more a couple of years back?

You can’t downgrade only upgrade

He can end the contract and take out a new one. Just port his number out and back again (assuming he wants to keep his number).
Edited by: "deeky" 18th Dec 2019
18th Dec 2019
I'm on quite a good (historic) deal with 3 too.
Went out of contract sometime last year, their SIM only "upgrade/renew" offers are inferior to what I already have.
I can confirm it'll just remain the same unless you choose to alter your plan or take up a new contract.
18th Dec 2019
Yep like others I rolled on to a rolling contract at the end automatically. Had a good deal, 200mins, unlimited data for £8 but I've left and gone to EE just in the last 2 weeks after having a rolling contract for 13 months. Three lately has been horrendous and I barely use 5GB a month. Wasn't worth the hassle for me.
18th Dec 2019

Any comms provider can amend whatever it wishes providing the notification of intended change is formal and the statutory notice is given, typically 30days. You can use that 30days to discuss alternatives or notify your intention to terminate / leave. See what your current automated options are - you may be pleasantly surprised and fortunate hotukdeals.com/dis…108
18th Dec 2019

You can’t downgrade only upgrade

To clarify: can downgrade at any time after minimum term, although it may need to be negotiated. The most excessive downgrade is PAYG.
18th Dec 2019
My friend was in exactly the same situation but was paying £15 a month for unlimited everything. Three called and said move to a £20 a month contract with 30GB data - no other options.

Friend got me involved.

Yesterday, I ordered the three unlimited everything sim card for £18 a month with £62.50 cashback. Works out at £12.75 a month which isn't bad all in all.
19th Dec 2019
That's probably just how they operate. They're a money making business. Just leave it and see what happens. *Remember that it will be their objective to tie you into another contract. Be strong Fk being tied into contracts
Edited by: "jco83" 19th Dec 2019
19th Dec 2019

... Be strong Fk being tied into contracts

Unless the provider notifies otherwise, as in OPs case, and OP wants to retain the pre term-expiry contractual allowances and cost.
19th Dec 2019 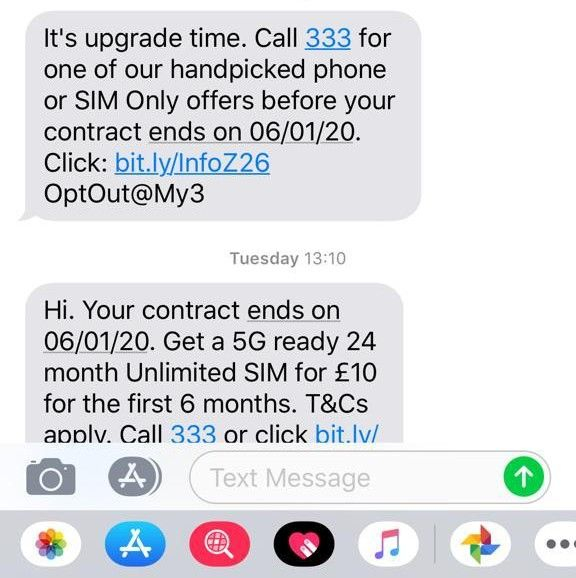 Might have been a text message they send out to everyone though, not to tell me they'll up the price ... This was the message. They sent out a text to say they haven't changed anything so hopefully it's a rolling contract from then on.
Edited by: "r55" 19th Dec 2019
19th Dec 2019
They can’t force and upgrade if you happy with the plan your on then continue to stay on it. The only way the price may increase is with inflation. The reasons why there trying to force you to upgrade is to hit targets and commission
19th Dec 2019
OP don't feel pushed into anything, they probably try make you feel you have to take a higher cost package that's their job, but don't allow yourself to feel pressured to take a new deal with them. They may ring you and try givin you a hard sell. F them ‌ "The only way I'm staying with 3 is on my existing deal"
19th Dec 2019
If anyone wants a discount or a nice package deal come see me at oxford street east on Saturday between the times 12.45pm to 21.00. Ask for Taha