26
Posted 10th Aug
Bear with me, but those *in the know* got theirs recently!

This is an OFFICIAL product, made in the UK, endorsed by Sky (who own the Sinclair branding) and this is their second run.


kickstarter.com/pro…nch
This is a bit of a specialist HUKD bargain

I got mine a few months back, there were about 3000 shipped
And everyone’s rather happy

These were from about £175 when originally launched

About these,
They’re a modern ‘upgrade’ and an OFFICIAL Sinclair product

Imagine your crappy old 8 bit computer , but able to wipe the floor with an Amiga!

One second you can fire up R-Type Loaded from tape.

The next you could be playing a more modern release, of which there are tens!
The dreamworld pogie demo alone trounces the Sega megadrive and sonic.

The caveat that this is a Kickstarter
But check out the credentials of the creators, no small fry!
All the hard works and design works and manufacturing tooling has been done, the supply chain is in order and it’s all good to go!
Just the funds needed to make another batch!
PostTweetShare Share with WhatsApp Share with Messenger
Community Updates
Kickstarter DealsRetailer Offers and Issues
New Comment SubscribeSave for later
26 Comments
10th Aug
Wasn't there a *lot* of controversy around who actually had the rights to the name and whether it would ever see the light of day? I seem to remember a few articles from The Register about it
10th Aug

Nope, that was the terrible ZX Vega + console. Nothing to do with this company. This is fully licensed and official.
10th Aug
Sorry but they have got to be joking at that price.
10th Aug

You're thinking of the ZX Vega+, the attempt at a handheld ZX Spectrum that had a successful £500K+ Indiegogo campaign, but only produced a handful of units, and left four and a half thousand backers out of pocket.

The Next's initial Kickstarter campaign was slow to deliver the final product, but came through in spades in terms of build quality and performance.
10th Aug
I remember picking up a zx80 kit up from a tech fair at the midland hotel Manchester with my mum......a good few years ago
10th Aug
Zero issues
Amstrad purchased Sinclair. Sky Purchased Amstrad.

There’s nearly 4000 users of this device already out there, 100’s of YouTube videos and reviews .
Also check out the credentials of everyone involved!

I’ll be. backing another
My credentials...over 100 kickstarters backed for a few thousand pounds all up and only true failure (lost a fiver) , with one still to ship but making progress (about £200 worth)
10th Aug

Sorry but they have got to be joking at that price.

Can’t believe it’s not butter :-)
As I said, it’s a niche product and in demand! People are paying over £700 on eBay, and typically £400+.
For YOU (and a large amount of the population), it’s not a bargain.
For a percentage of the remainder....it’s a steal!
10th Aug
Load ""
10th Aug
"The dreamworld pogie demo alone trounces the Sega megadrive and sonic." 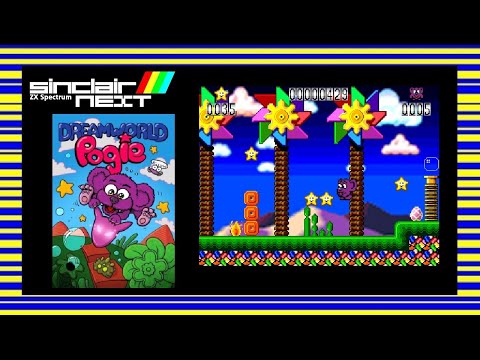 10th Aug
Love the Spectrum with all my heart but no way would I pay these prices.
10th Aug
Might be endorsed by Sky but does not mean Skyvwill get their money nor the consumer the product.

I recently bought an item off Indiegogo, only because I know the company is well solvent.
A game of Minefield.
Edited by: "LadyEleanor" 10th Aug
10th Aug
What exactly is this? is it some device just to play old games?
10th Aug
sold my orignal spectrum 48k for £45 with games 31 years ago. still got my amiga 512k in my mothers loft with games but.
10th Aug

Sky won't get a penny. In return for granting a licence to use the Sinclair name and logo, Sky ask that the licensee donates a proportion of revenue to charity.

From the previous Kickstarter:
Yes, the Spectrum Next is amazing. And it also does extra good: part of all revenue generated by the project, in perpetuity, will go straight to the Royal National Institute of the Blind. We owe big thanks to the Amstrad / Sinclair brand holders who granted us the right to use their IP in exchange to this donation for one of the greatest charities around.
10th Aug

Sorry but they have got to be joking at that price.

Strangely its about 3.5 times cheaper than the 48K Speccy was on release - taking inflation into account (£175 in 1982 vs ~£175 now) - but it also can be turned into many different systems using a different FPGA core on boot (BBC model B, MSX, various arcade systems, Amstrad - potentially hundreds on the way). Anyway, it was a bargain to me in the last Kickstarter, child 1 loves it (more than the raspberry Pi or iPad she plays on), may get another one for child 2 to learn programming on - it's a system you can still almost understand (only 8500 transistors in a Z80 vs nearly 4 Billion for a modern CPU).

What exactly is this? is it some device just to play old games?

In a way yes, if that's what you want to do on a computer, but it is more than that to a lot of people - It's the spiritual successor to the Sinclair ZX Spectrum had it evolved again, the case has been designed by the late Rick Dickinson, the pioneering award winning designer of the original ZX81, ZX Spectrum, QL. It is a solid way to play old games and run old code more accurately than an emulator (FPGA implements the actual hardware) and plenty of new games are being written/designed for it today - its pretty easy to program for, I've written a half decent looking pacman/maze game draft in a few sessions. Way better keyboard than the one back "in the day"
11th Aug
9PM today guys, then I can probably get this bumped back to the deals page :-p
11th Aug

Yep, you’re correct.
however....one success by the team Delivering nearly 4000 expensive items (late) somewhat mitigates the risk. Especially as all the design work and supply chain Has been done. second time round will be significantly quicker!

Woooooo!
11th Aug
Fully funded in less than 5 minutes.
11th Aug
It’s at 620k now! Mods can we put back in bargains!? You can order for delivery in August next year!
12th Aug
Wonder what Sir Clive makes of this. Last I heard he married a lap dancer!

Edit: Oh well, seems I missed this new-ish development - dailymail.co.uk/new…tml
Edited by: "louiselouise" 12th Aug
12th Aug
Apart from possibly something to look at for about a month until most of us get bored ...what will this do, that a mediocre old PC or Laptop and Retroarch cannot do ?
Edited by: "dmm1000" 12th Aug
12th Aug
kickstarter.com/pro…e-2
12th Aug

"Lady Sinclair 'too upset to talk' but friends say Sir Clive has already moved on" What a guy.
12th Aug

Feel a bit sorry for the long-term partner picking up the pieces behind the scenes. Not quite so noble, or a great guy, but it's his life.
Edited by: "louiselouise" 12th Aug
15th Aug
Over a million quid!!