3
Posted 1st Oct 2020
Hi. I have sent HUKD a message (no reply as yet) about this but it's such an odd situation that I wondered if a thread might shed light on whether it's just 'local' to me or if anyone else has experienced the same.

On Tues (29/9) everything worked as normal. Login was as it should be with no issue whatsoever. Then, on Wed AM (30/9) login using the same browser as always fails. The following popup box message follows after inputting details and clicking the "Login" button:

This is using the Seamonkey browser on Linux O/S. The same popup occurs when using Firefox too. What is even stranger is that it does not occur when using Palemoon browser on the same O/S. It logs in as normal. For some other reason however, it won't allow me to upload screenshots either?

The most obvious cause would be a local change to the machine in question but I know for sure that no changes have been made as this machine is set to store no system changes UNLESS I manually save them. Effectively, every time it boots, it's as if it's the first time - so a perfectly 'clean' machine from that standpoint. Therefore, no installs/updates/new cookies etc. Nothing is different.

I switched to a Windows based machine and that too logs in fine - using both IE and Edge browsers. I also noted that; on the Linux machine(s); if I clear the HUKD cookies from the browsers that fail - then open HUKD once more - you get the 'new visitor' front page with the message bar prompting "Start Tour" and the "X" button to close it. If you click the "X" you then also get the same "Something went wrong" popup.

I am therefore left thinking it must be browser-related in some way, but what? Has HUKD altered something on the site regarding cookie policy and the browsers aren't liking it? Why does Palemoon (a really old version!) work correctly? Lastly, is that popup box message a local "system" message or is it one that HUKD recognise by site design?

I'll try to post a pic but; as said; it won't let me post one in this message. That might be by design though, so I'll add one (if I can) in a followup post. If HUKD (or anyone) could comment on a likely cause it would be great.

Another strange occurence. I just now got "kicked out" of being logged in. That's never happened in the history of using HUKD. How odd. I had to log in again - but it still worked. Also, something that is new and possibly relatable to this issue - I can usually fire up another browser whilst being logged in and I'll also be logged in in the 'new' browser window. Not now. The 'new' browser seems to require separate login - which; of course; it doesn't allow without the "error" popup.

‌
1st Oct
Well, this has gone from a pleasure to use to being a royal pain!

Fired up Windows - IE. Can log in but cannot enter any data into the "Post a comment" box - or edit any posts previously made. It refuses to allow you to click in the box. The mouse pointer stays as a 'hand' whether you click or not?

So, I'm down to one browser that seems to work ok, which is MS Edge. I'm using that now but it's not my usual choice. At least it allows me to log in AND enter data into forms etc. Lets see if it lets me post pictures:

This is the message from Linux Seamonkey browser: 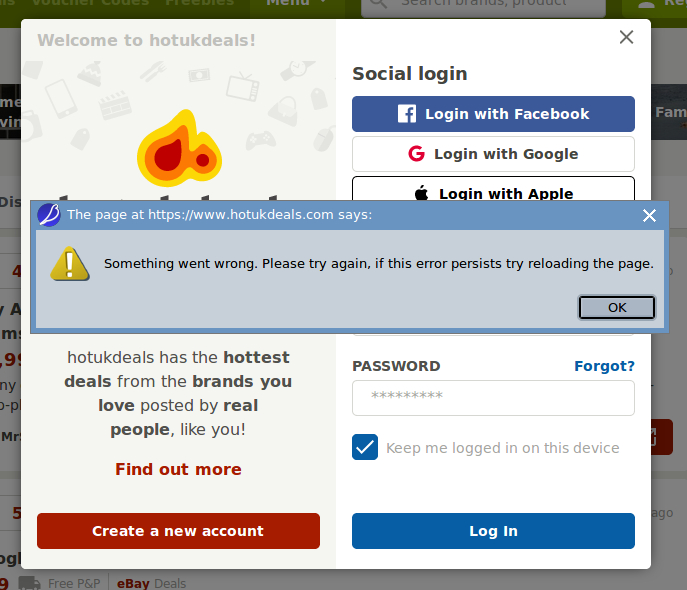 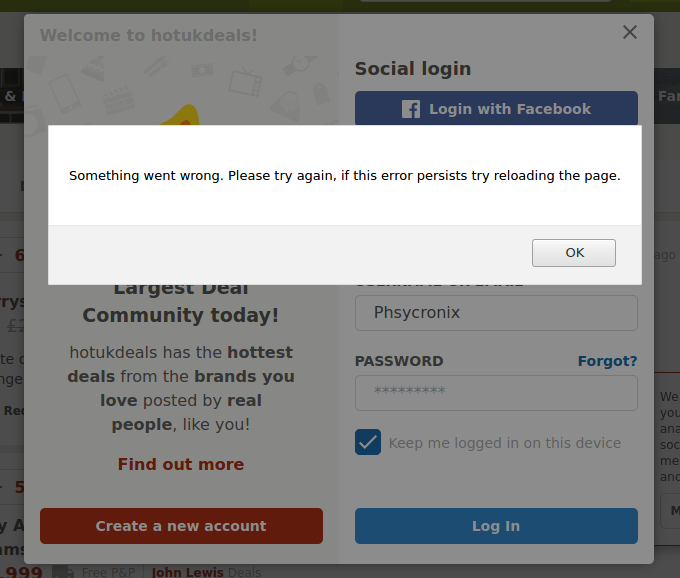 And here, if you clear ALL cookies and get the 'new visitor' front page - then click "X" to close the "Tour" banner:

So, at least pictures work from Edge. As mentioned before, Linux Palemoon browser will allow login but then won't allow other functions to work! All of these Linux-based browsers worked perfectly prior to yesterday - so what has changed???

I tried updating the browsers to the most current but it has had no effect. Firefox 81 still won't allow login. Palemoon 28 now doesn't allow login either (same error message popup as shown above) - where version 27 did! ‌

Using the same Linux OS that fails for Seamonkey, Firefox and versions of Palemoon - I have downloaded and installed Opera V45, and it seems to be working (sort of.) Login was as normal and site usage seems fine with no apparent hiccups. Entering data into a thread (commenting/editing) is working. I'll try posting a random pic below to see if it allows that:

Ok. "Add image" seems to work. A rather odd 'failing' however is the "Bold / Deleted / Italic" buttons seem to work randomly? If I left-click and drag the cursor to highlight a word or sentence I would like to appear in bold text, the "Bold" button (or any of the other buttons!) does nothing.

If you take my "EDIT: Update 04/10" heading above, for example: I cannot highlight (or double click) the word "Update" and make it bold by itself. But if I triple-click to highlight the entire sentence, the "B / D / I" buttons become 'active' and I can use them.

As another example, the word "Seamonkey" in the paragraph beneath the update heading cannot be made independently bold. Only the entire paragraph. So, the following:

It would appear that the page programming is either taking into account (or effectively ignoring) the invisible "blank" character after an individual word. It may seem as if I am contradicting my initial statement but to prove a point, the above two examples were both made "Bold" by selecting the whole word from a "Triple-click" which also highlights the invisible 'blank' character at the end. In the first word, there are only 9 characters in the word - but also a 10th 'invisible' character. Highlight this, and you can then use the formatting buttons.

In the second; two word; example - you cannot make the "Seamonkey" word bold on it's own as the space between the words is an actual recognised "space" character. If you select just the Seamonkey word and that "space" - the buttons don't function either. If you highlight both words (not with a click and drag or double-click, as that doesn't pick up the invisible 'end' character) with a triple-click, you then get button functionality.

In essence, you cannot format any word WITHIN a sentence or paragraph. Only a word on it's own (and it's own line), or the entire paragraph.

Trying "Chromium 85" now and was able to login. Hate Chrome/Chromium but thought I'd try to see what happens.

Yep. All work as expected. It even selects the individual word now without the invisible character at the end. So, at the moment, Chromium seems to work but then being one of the worlds most popular browsers, I guess it should.

I wonder what the other browsers are lacking for them suddenly not to function with HUKD???
Edited by: "Phsycronix" 15th Oct
27th Oct
* UPDATE * - 27/10

Haven't heard a thing from Admin but I thought I'd make a post to say:

I don't know what you've done but login is now possible again from Seamonkey. I'll try the others too but SM is back up and running - so, if you did fix something - thank you!