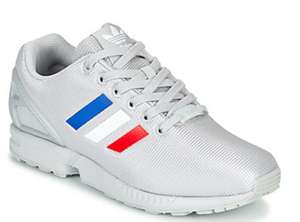 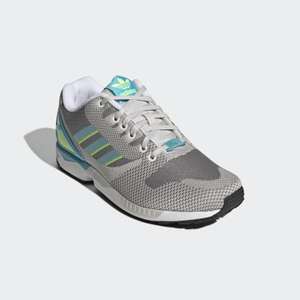 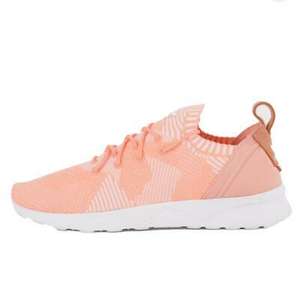 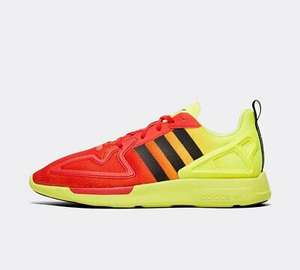 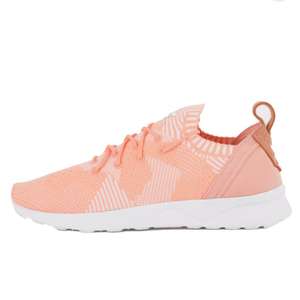 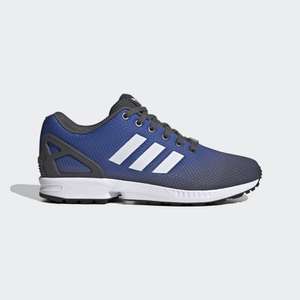 Part of the popular Adidas Originals range of trainers, the ZX Flux is a stylish collection of athleisure sneakers that combines the performance specifications of running shoes with the aesthetics that today's footwear fashionistas demand.

Adidas is one of the world's biggest manufacturers of high-performance sporting footwear, supplying Olympic sprinters, cricketers, golfers and countless footballers across the world with shoes.

Founded in Germany, the firm has been around since the 1920s but found fame in the 1950s as it competed with Puma (run by the brother of Adidas' founder) for the crown of Germany's leading sportswear firm. That battle still hasn't been resolved, with both companies pushing the boundaries of footwear with every new collection.

Returning to the ZX Flux, it builds on one of Adidas' iconic creations: the ZX 8000. Launched in 1988, the ZX 8000 introduced the Torsion system, which provided unprecedented support and balance for runners and other athletes. With their bold colour schemes and focus on athletic performance, the ZX 8000 became a legendary trainer, so it's no wonder that Adidas sought a way to bring them back.

The ZX Flux was their answer. Introduced in 2014, the Flux is a direct successor to the ZX 8000. It fits into the Adidas Originals range of shoes that are equally suitable for sports and social life, and it is one of the most stylish, most customisable trainers around. 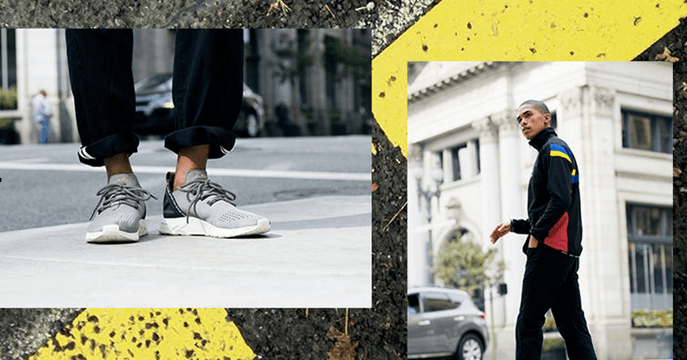 The first thing to remember about the ZX Flux trainers is that they are an update on Adidas' classic ZX 8000 sneakers, which were released back in 1989. The ZX 8000 took the standard ZX trainers range and added a strikingly vivid colour scheme which blew late 80s footwear fans away. Part of the aim of the ZX Flux was to recapture that excitement while adding new features for the 21st century.

The difference is that with the ZX Flux, the designers sought to strip down the concept of the ZX 8000, keeping its stylish looks but adding in performance elements for athletes. It's a classic example of the “athleisure” trend that's sweeping European and American fashion.

In terms of features, the ZX Flux is right on point. The outer sole has been retained from the ZX 8000, but the ZX Flux has completely renovated the upper by adding a specially moulded heel cage to provide athletic support, tonal laces and a woven upper that allows the wearer's feet to breathe while staying nice and dry.

The outside of the upper has a dynamic coarse texture, while the inside is luxuriously soft, making these some of the most wearable trainers around. There's a rubber toe bumper to protect the ends of your feet, special mid-feet support which is handy for runners, and all of the grip that made the ZX 8000 outer sole so effective on the road.

Aside from those core technical features, the ZX Flux range looks the part. Adidas has designed it so that plain ZX Flux shoes have an efficient, no-frills appearance, while the uppers can be adapted into hundreds of colour schemes, enabling wearers to express themselves via their favourite trainers.

Although the ZX 8000 was specifically designed for runners, that's not necessarily the case with the ZX Flux, which is targeted more at the fashion market. Sure, it could work well at the gym or down at the track, but the Flux is intended to fit into urban outfits rather than to grace rural trails or football pitches. For instance, a black pair could double up as a comfortable commuting option to rest your feet in on the way to work.

Then again, they can stand up to plenty of punishment. It's just a question of whether you intend to use them predominantly as a fashion shoe or for exercise purposes. 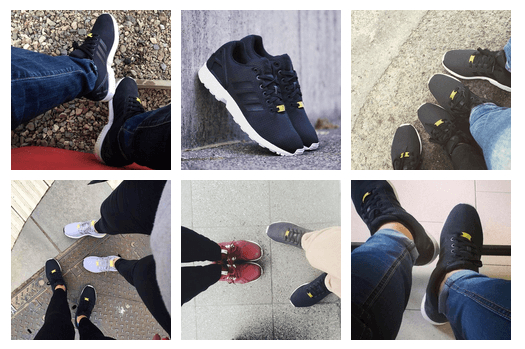 ZX Flux shoes come in three major varieties: men's, women's and kid's. All of them come with the high-grip sole, a woven upper, tonal laces and a heel cage. It's just a question of fit and size.

One of the great things about the ZX Flux range is how buyers can customise their trainers to create something that is (almost) totally unique. For instance, you can choose to split the toe with two different colours, add camo elements or colourful prints or pick from a wide variety of colours, including dazzling black and gold shoes.

The “Make it Yours” tool at Adidas' website allows you to specify your heel colour, laces, 3-stripes or toe. You can add a personal message on the heel loop too – a neat touch that only Adidas would come up with.

If you want to customise your ZX Flux, look for products listed as “MI ZX Flux”. Expect to pay a little more than for the standard models.

How Do You Customise Your ZX Flux Trainers

Let's look in a little more detail at how you can create your own pair of Adidas ZX Flux, as this is a core feature of the shoe.

To start the customisation process, you'll need to download the Adidas Photo Print app which is available for Android and iOS.

Now, use the app to search through image and photo libraries before settling on an image to apply to your trainers. Adidas recommends creating Star Wars themed shoes, but you could equally go for Union Jack or football team-themed footwear – it's up to you.

Unleash Your Creativity with Adidas

How Can You Spot Fake ZX Flux Trainers?

These days, counterfeit designer footwear is everywhere, and you can sometimes find yourself spending face value for fake goods which are essentially worthless. So how can you protect yourself when you are buying shoes from online sellers?

First of all, all Adidas shoes will come in an Adidas box with a special box label stuck on the side. This label includes the following information, without exception: the model of the trainer, the country of manufacture, the size, colour and the PO number. This PO number should match the one on the label stuck inside your shoes, so double check when you lift them out of the box for the first time.

Now check the heels. On a good pair of Adidas trainers, there's hardly any gap between the sole and the heel cage. In fact, the heel cage should seem to sag into the heel, as if it's one piece of material. If there are any spaces or jagged edges, you may well have a fake on your hands (or feet).

Finally, turn your shoes over and check the torsion logo. This should include the Adidas trefoil (the gas burner logo) and should be tightly embedded in the rubber of the sole. If it moves or there's even the tiniest space between the two elements, the shoes may well be counterfeit.

According to those in the know, ZX Flux trainers tend to come up on the large side. So, if you are a size 9, there's a better than evens chance that you'll need an 8.5 or even an 8 when wearing Adidas ZX Flux.

That's just a generalisation though. The best thing to do is to try on a pair of ZX Flux in a shoe shop to get a feel for the fit and then make the actual purchase online via HotUKDeals to save money. It's hard to resist the urging of salespeople, but you'll definitely make savings that way.

How to Look After Your Adidas ZX Flux Shoes

If you've bought a custom-made pair of ZX Flux sneakers, keeping them in peak condition should be a priority.

If you just get a little stain on your shoes or they attract some dirt when walking the dog, don't panic. The general opinion is that ZX Flux shoes can be washed in the washing machine at a low heat, or you can scrub them with a shoe brush and warm water. It's always better to clean them immediately after staining them, by the way, as stains can easily become stubborn and embedded if left for too long.

However, if you've had your ZX Flux printed, it's probably wise to avoid the washing machine. Adidas recommend using an eco-friendly detergent, some warm water and a cloth to wipe down their running shoes. Dry them at room temperature and remember to add some absorbent paper inside to remove any excess moisture.

Laces can, and should, be removed and washed regularly to keep them in good condition while removing your insoles to air them is also a very good idea.

How and When to Find Cheap Adidas ZX Flux Deals

If you've decided that you have to have a custom-made pair of Adidas ZX Flux trainers, what is the best way to save money on your purchase?

Before you do anything else, find out your ZX Flux size. As we noted earlier, ZX Flux shoes come up a little large, but the only way to find out how large is by trying on a pair at a shoe store.

When that's done, start bargain hunting. One place to look is the Adidas website, where the sales section could well include ZX Flux deals. Check the outlet for the type you'd like, but don't worry if you can't see them. Other merchants may still be worth checking out.

Now, find out whether other sellers are discounting ZX Flux shoes by heading to the HotUKDeals Adidas ZX Flux listings. You'll see a long list of discounts from UK merchants like Sports Direct, JD Sports, MandM Direct, Footlocker, Foot Asylum and Zalando as well as eBay and Amazon sellers. There's bound to be a deal that you can take advantage of.

If that's not the case, there are other avenues to explore. For instance, Adidas schedules huge sales around Black Friday in November, and the ZX Flux will almost certainly be discounted, while January Sales is another good time to shop for bargain hunters.

Stay cool, shop around and don't go for the first offer you see. Cheap ZX Flux deals are easy to find with the help of HotUKDeals.

Halfway between a performance sports shoe and designer fashion footwear, Adidas ZX Flux trainers are in demand all over the UK. Colourful, comfortable and easy to customise, these shoes have been one of the German company's biggest recent hits. If you need a new pair, find the cheapest possible prices by checking out the Adidas ZX Flux discounts at HotUKDeals.