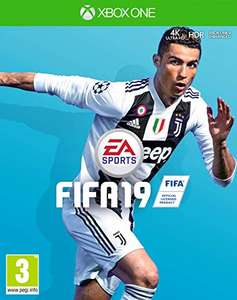 Anyone looking for PS4 version of FIFA 19 for similar price should check ASDA - 50p instore.

Thanks @southsidesilver , Grabbed one as soon as you posted. Needed one as a filing copy. XD 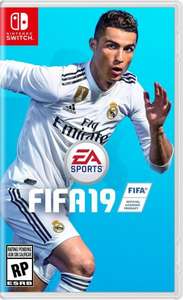 You could get a job at Nintendo with that imagination :D get your CV in. My one code in a box game I own is the 3DS Mario/DK marches/minis on the move double game. Nice artwork on cover blighted by a big white "code in a box" notice. Is all a bit daft really. I think the key is having a custom/workable cart with the box. Recall seeing before someone made an SMS Alex Kidd In Miracle World 2 with proper cart/box. The game itself even looked slick.

If anyone happens to get an additional one please let me know :) Happy to cover postage! Visted both Woking Stores yesterday and no luck :( Going to try Kingston's a bit later fingers crossed. :{

I'm always going out or traveling so Mario kart and street fighter make the perfect multiplayer games for me. But I do know some people who wouldn't ever even buy there's games as they play mainly one player games.

See, something like Mario Kart I'd never ever buy digital as Nintendo first party games have so much resale value, or I might want to lend it to another friend for them to play on their Switch 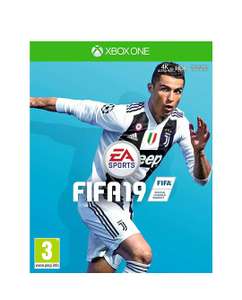 Too expensive. And I know people say that stick to older versions because the gameplay hardly changes but if you're a football fan it's very hard to play using your team when the squads are outdated. Take Chelsea for example - their squad has changed so much in just one year that I can't imagine any fan of that club sticking with Fifa 20, let alone this even older edition.

You can't give these away on eBay

This seems a bit steep (confused) 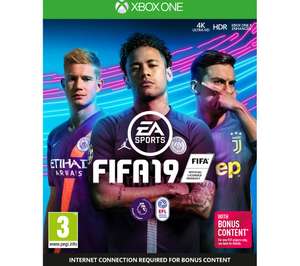 Anyone knows how to claim the free spotify premium for 6 months ? Got the game today, but I can't see any code or instruction..Thanks

Exactly, so no point paying for it really... I think you pay for the spotify membership and the Fifa is “free” (y) (popcorn) (lol)

Sadly thats not how it works for fifa. Game still holds some value IRL but in-game when you play it you'll have nobody and nothing to play for. Hopefully that makes sense. With fifa every year, they move off the previous title and go on next. (I play/buy yearly and regret playing/buying it every year)

XD Only a slight exaggeration hey!? (about £15 is cheapest with a quick search) ;) (cheeky)

Definitely not for a £1 game 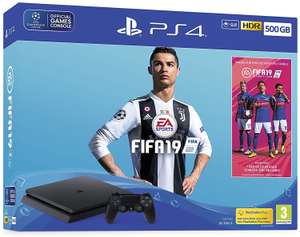 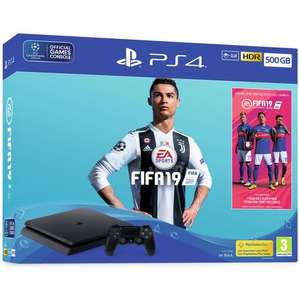 Thanks for the tip - I’ll check them out tomorrow

I returned a sealed switch game too. I was gobsmacked the staff unsealed it on return.

I took a new sealed Pro back to Argos before Christmas and the staff broke the seal to check the contents. You could be getting a brand new console with this.

FIFA 19: Football Simulation at its Best

Few gaming franchises can compete with FIFA in terms of longevity and fan base. Since 1994, EA's flagship football game has wowed players on Megadrives, PlayStations, PCs, Game cubes and now PS4 and Xboxes – and it just seems to keep getting better.

This year's edition has a release date of 28 September, 2018 and will be available for the PlayStation 4, PCs, the latest Xbox system, the PS3, Xbox 360 and Nintendo's Switch console. So almost all gamers can enjoy a slice of the action. Let's find out whether it's really a promotion from FIFA 18, or a game destined to be relegated to the dustbin of history. 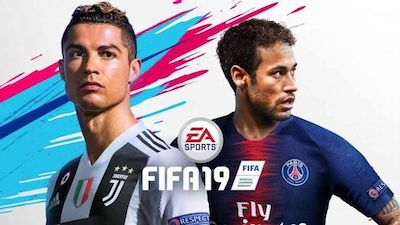 FIFA 19 is the 24th game in the main FIFA videogame series, and represents another step forward for what is undisputedly the number one franchise football franchise. lectronic ArtsE have been publishing FIFA games since the arrival of FIFA International Soccer back in 1994, and they have released an annual update almost every year since then.

Along the way, there have been some standout titles (though almost every FIFA game has found fans on numerous gaming systems). FIFA 98 was an early highlight, recreating the atmosphere of the France 98 World Cup and offering a revolutionary 3D engine. After that, classics like FIFA 05, FIFA 11 and FIFA 15 all added new control ideas, slick multiplayer modes and immersive graphics.

FIFA 18 was called by some reviewers the “best in the series to date”, with a new level of realism in ball control, the attraction of building a multiplayer squad, and refinements to the career option which added a new dimension to FIFA's action. So FIFA 19 definitely has a lot to live up to. The question is, does it succeed?

What New Content Does FIFA 19 Bring to the Table?

Every time EA release a new version of FIFA, there seems to be a host of new features to report, and FIFA 19 is definitely not going to buck that trend. The inclusion of new game modes may be the most critical addition, but there are plenty of other features which set this year's edition apart: 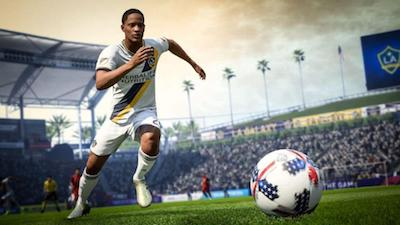 How Have the Player Ratings Changed for FIFA 19?

Whenever a new edition of FIFA is released, fans look for one thing above all else: which players have risen up the FIFA rankings, and who has stagnated over the past year. By picking players with the best ratings, you can optimise your squad with the very best performers.

2019 is no exception, and there have been some important alterations in the football power rankings.

For instance, players who have been given a ratings boost include:

Superstars like Neymar and Messi are pretty much as good as ever, but not everyone has seen their stats improve. Joe Hart's poor performances have seem him demoted, Zlatan's getting a little old, as is Yaya Toure, who used to be a beast in FIFA games. And almost every player's numbers have been tweaked, so pay attention as you build your dream 11.

The new FIFA game doesn't just add iconic players and venues. It also offers a range of game modes for players to try, including:

What Are the Critics Saying About FIFA 19?

At the time of writing, FIFA 19 had not been released to the gaming media or the general public, but experts had provided feedback on a fully-functional playable demo, and the main elements of the game itself were well known.

For Trusted Reviews, 2019's update was welcome, and promisedto fix a few mistakes made by EA with 2018's edition (most notably changing player achievements after the game's release via downloadable patches). But that changes are “very subtle, offering very slight improvements to the overall package.” For their reviewer, the major selling point of FIFA 19 would be the inclusion of ECL and Europa League competitions which had previously been licensed to Konami.

Other commentators were more positive about new elements in FIFA 19. For instance, the Independent newspaper praised the way the title creates the impression of a free-flowing football match, not a “series of moments.” For their reviewer, the little touches detailed above were almost all well thought out, and added up to a much improved in-game experience.

However, the consensus comment is that FIFA 19 offers what we've come to expect from FIFA releases: a combination of minor tweaks and slight graphical improvements, added stats and tactical options. If you love the game, it's likely to be a must buy. But if you just play soccer videogames every now and then and you already have FIFA 18, try the new version first and see if it offers anything significantly different.

FIFA 19 will be released on 28 September 2018 for PCs, Xbox One, PlayStation 4, PlayStation 3, Nintendo Switch and the Xbox 360 and as normal, buyers have a range of packages to choose from:

PlayStation fans might also want to know that a special FIFA bundle of the PlayStation 4 Pro has been unveiled to coincide with the game's release. Sporting Cristiano Ronaldo in his new Juventus kit on the cover, this package delivers a graphical upgrade thanks to the Pro's 4K capabilities, a limited edition FUT strategy guide, and a few other extras that might entice gamers. In any case, it looks like an excellent purchase for people who are thinking about upgrading from a standard PlayStation 4 or a PS3.

Every year, the processing power required to get the most out of FIFA games seems to rise, so be sure to check that your PC measures up by comparing its specs with these recommendations from the developers. Firstly, let's look at the minimum recommended specs:

And the recommended requirements: 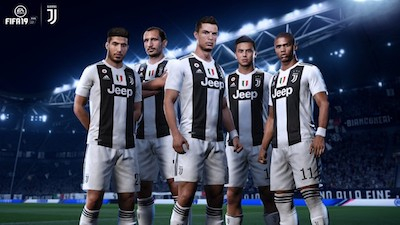 How Does Multiplayer Work in FIFA 19?

Multiplayer action has been one of FIFA's strengths for over a decade. Nowadays, FUT allows you to create a team, play matches and build your skills and squad as you progress, and it's a big deal to number among the highest ranks of global FIFA players.

However, this year's FIFA also goes “back to the future” by resurrecting old school local multi-player gaming via the Kick Off mode.

Kick Off Mode – Kick Off mode allows up to 4 players to match up in the same room. You can play straight up one on one fixtures, compete in UEFA tournaments or try a host of other options which can really spice up the footballing action.

These Kick Off modes add a whole new element to FIFA playing, particularly if you can get a few friends round for an evening. If you do intend to invite some fellow players, it might also be an idea to purchase an extra Xbox or PlayStation controller because FIFA 19 could well be at its best when four controllers are hooked up.

How to Make a FIFA 19 Purchase and Save Money

If you want to add the year's most eagerly awaited football game to your collection, you should be able to save money in the process. If you are quick enough, you'll have a choice of pre-order bonus deals, but even after 28 September 2018, the various packages will be on offer for well below face value.

The best way to seek out the FIFA version you need is to bookmark the FIFA 19 HotUKDeals listings. Out listings will be regularly updated with discounts for the PlayStation 4, Switch, Xbox and PC editions. All of the UK's biggest videogame merchants are represented, including GAME, Smyths, CDKeys and Amazon. There should also be offers from the PlayStation Network, Microsoft, Nintendo and EA Games, so shop around and check out every deal.

Because FIFA 19 is an autumn release, you might also get lucky with Black Friday offers. If you want to snap up one of the more expensive editions or a PlayStation 4 Pro FIFA bundle, waiting until November could result in big savings. And if you need a festive gift for FIFA fans, plenty of discounted FUT points should be on offer. But even if you shop when the official release date arrives, our listings will always deliver the best prices around.

Football Glory with the FIFA 19 Offers at HotUKDeals

2019's installment in the FIFA series is almost guaranteed to be the year's standout football title. With extra leagues to play, more football grounds than ever, and new options for playing with friends, FIFA 19 delivers the usual round of improvements on its predecessor, and gaming fans can find the version they need for less at the HotUKDeals FIFA 19 listings.