Fitbit Versa is a smartwatch from Fitbit that helps you to stay fit and look after your health. Available in a variety of colours including rose gold and black, the fitness tracker is completely waterproof. It also come in a Lite version for fitness enthusiasts on a budget. The latest offers on Fitbit Versa can be found right here on hotukdeals. 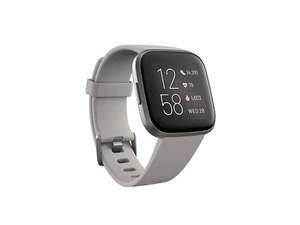 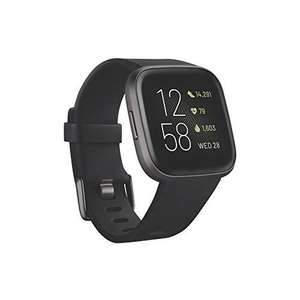 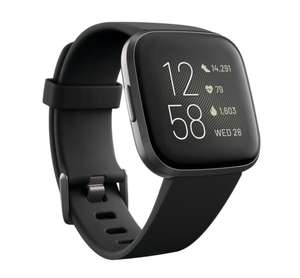 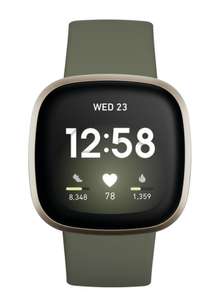 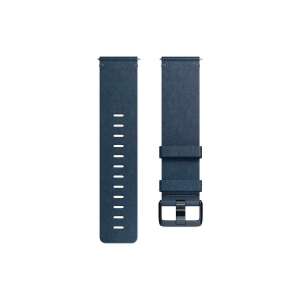 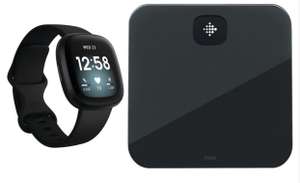 Get in Shape with Unbeatable Fitbit Versa Deals

Ever since introducing its first wearable device in 2009, Fitbit has been at the forefront of fitness accessories, providing totally new ways to stay in shape and monitor our health. The Versa is the latest in a glittering line of wearable tech, which stretches from slender bands to deluxe watches. The Versa 2 comes in at the top end of the Fitbit Versa range, offering real competition for Apple Watches. Capable of taking calls, playing music, monitoring sleep and, of course, logging exercise with pinpoint precision, this device could revolutionise your fitness routine.

This buyers' guide will take you through all the features packed into the FitBit Versa, as well as where to find the best FitBit Versa Deals. So read on to find out more!

The market has been crying out for a watch which bridges the gap between fitness trackers and expensive smart watches, and the Fitbit Versa 2 achieves this to a remarkable extent. The addition of apps like Alexa and Spotify turn it into a more powerful beast than the original Versa, and provide real competition for Apple's own wearables. The lack of calling capabilities and limited OS mean that the Versa 2 remains a fitness tracker above all else, and it excels in the regard, offering a huge range of fitness tools. If you want to keep tabs on your progress, it's ideal, and the inclusion of swimming makes it almost unique among today's trackers.

However, the Versa 2 isn't flawless by any means. There are some question marks about the accuracy of its calorie counting, and there's no in-built GPS. So take the distances logged with a pinch of salt. The display and newly added apps are great, and when paired with Bluetooth headphones, add an extra dimension to the Versa family. But there's still a big gap between the functionality of the Versa 2 and the most advanced Apple Watches. If you're seeking a device that keeps you in the loop for work, you may want to look elsewhere. Having said that, given the value delivered by Fitbit Versa 2 deals UK customers will find the device hard to resist. You simply can't get the same mix of fitness and entertainment features at a comparable price.

These sentiments have been echoed by most UK industry commentators. For example, Tech Radar's experts gave the Fitbit Versa 2 4 stars out of 5. Noting that the Versa 2 proves that “less is more”, the journal called it “a near-perfect fitness tracker that comes with some smartwatch perks.” High praise indeed.

FitBit Versa 2 is at the top end of the Versa range, and here are its specs:

The Fitbit Versa UK range currently contains two main models, so let's look at those first before going through the main features:

The heart of the Fitbit Versa 2 is its fitness features. After all, without them, this would be a slightly underpowered smartwatch. But with them, it's a whole lot more. Building on previous Versa models, the Versa 2 packs in over 15 different exercise modes for various skill levels and activities, and can deliver tailored goals for each. Whether you're swimming, cycling, or even keeping a yoga schedule, there's an app for that with the Versa 2. These tools sit alongside distance tracking, heart monitoring, and even on-screen workout tutorials that make the most of the Versa 2's AMOLED display. If you're serious about working out, there's a lot here to hold your attention.

Let's take a look at the full list of Fitbit Versa 2 features.

Comparing the Fitbit Versa 2 vs the Apple Watch 5

While lacking a few “smart” features, the Fitbit beats Apple's latest watch for fitness – and costs far less, making it an appealing option.

Fitbit has made a move to challenge Apple's dominance in the smartwatch market, realising that a huge chunk of the market prioritises fitness applications. And you can see this in the comparison between the Versa 2 and the Apple Watch 5 (the most realistic comparison as of early 2020). If you own an Apple iPhone, you can probably do a lot more with the Watch 5, and Apple have paid a bit more attention to aesthetics. If you're shopping for a watch to show off at work, rather than at the gym, the Watch 5 will probably be preferable. But the sleep analysis tools, variety of fitness programs, and the relatively low Fitbit Versa 2 price tag makes it a far better option for most fitness fanatics.

It also makes sense to compare the Versa 2 with the Fitbit Versa Lite. As the name indicates, the Fitbit Versa Lite is similar in design and looks, but with fewer features and a smaller price tag. If you aren't too bothered about maxing out on apps and workout routines, the Lite is a good option, but it may not have enough features for serious runners, cyclists, or gym bunnies.

Check out the comparison table below:

The Fitbit Versa 2: Pros and Cons

If you've ever used a fitness tracker or a smartwatch, you'll instantly notice a theme hear. The mix of advanced connectivity features and apps makes the Versa 2 akin to a genuine smartwatch, which incorporates key capabilities of mobile phones, and lets you stay in touch with the wider world while you work out. But there are also plenty of core elements based around fitness – from sleep monitoring to heart rate tracking. The question we'll answer here is whether the Fitbit Versa 2 juggles these two identities successfully, and whether it's as good as a specialist tracker, or a premium smartwatch.

How to Pair Headphones to a Versa 2

Pairing headphones is a great way to enjoy the Versa 2's Spotify capabilities and other apps. Setting up the tracker with headphones should be simple, just follow these easy steps:

Most buyers will want to accessorise their purchase to some degree – if only to keep their Versa 2 safe and in good condition for as long as possible. Screen protectors are a must, slotting on top of the Versa 2 screen, and avoiding nasty scratches or smudges. But if you intend to take your Versa across the world, a padded travel case will be vital. Good models come with loops and clips for multiple straps, as well as the Fitbit charger.

Check out these suggestions:

The question is Fitbit Versa 2 waterproof will interest any fitness fans – especially those that run outside. And, yes, the Versa 2 is rated as waterproof to 50m depth, so a bit of rain won't be an issue.

Does Fitbit Versa have GPS?

No, the actual Versa 2 doesn't come with GPS. To track routes, users need to pair the Versa 2 with a GPS-compatible smartphone.

Is the Fitbit Versa 2 compatible with iPhone?

Yes, the Versa 2 is totally compatible with iPhones and the latest Android phones, providing they share the same Bluetooth version.

Probably. However, some analysis suggests that the Versa is quite generous to users relative to Apple Watches. So be aware that many calorie counts are actually estimates.

Does the Fitbit Versa 2 have Bluetooth?

Yes. You can use Bluetooth to pair the Versa 2 with headphones and other wireless devices via Bluetooth 4.0.

Does the Fitbit Versa 2 track swimming?

Yes, the Versa is designed to track swimming, taking advantage of the 50m waterproof rating.

Does the Fitbit Versa 2 play music?

If you pair up the Versa 2 with Bluetooth headphones, you can listen to stored music and live streamed tracks from apps like Amazon and Spotify.

Does Fitbit Versa 2 have Spotify?

Yes, one of the key additions to the Versa 2 has been seamless compatibility with the Spotify App.

Can you answer calls on a Versa 2?

No. The microphone can be used to make requests and receive notifications, but you can't make calls. For that, you'll need a paired phone.

How often should you charge a Versa 2?

Fitbit states that the Versa 2 has a charge time of over 5 days, but to be safe, it's worth charging every day or two.

Should you get a screen protector with a Versa 2?

Advice for Fitness Fans: How to Find the Cheapest Fitbit Versa 2 Around

Fitbit's Versa 2 fitness watch could be a game-changer in the wearables sector. For a long time, fitness bands have lived in a separate universe from premium smartwatches, an area that's been dominated by Apple. But with the Versa 2, Fitbit have made a play for Apple's territory. They might not have conquered the Apple Watch, but there's no doubt that the Versa 2 is a huge step up on the Versa, and a genuine contender for upmarket fitness tracker fans.

While the Versa 2 is much cheaper than the Apple Watch 5, it's still a relatively expensive piece of kit. For example, the Fitbit Versa 2 debuted at around £200, while the Versa Lite retailed for £120 or less, and you can pick up original Versa watches secondhand for under £70. The extra features of the Versa 2 make it an appealing purchase, but the added cost means that hunting for Fitbit Versa 2 offers is absolutely essential.

Fortunately, there should be ways to do so. If they want to find a cut-price Fitbit Versa UK buyers should start their search at hotukdeals. Our listings bring together deals from the UK's leading fitness wearables merchants, including major names like Amazon, John Lewis, Currys PC World, Gearbest, TekZone, the BT Shop, and Fitbit's own website. You'll find promo codes for standard Versa 2 models, as well as “Limited Edition” designs with souped-up straps, and discounts for accessories as well. It's the ideal place to shop around.

But don't be too hasty when choosing a deal to redeem. If you delay your purchase, it may be possible to find even better Fitbit Versa offers. When Black Friday comes around in November, UK merchants tend to schedule major reductions, and the same applies to Amazon Prime Day, or the New Year Sales (a huge sales period for fitness-related sellers). Those periods see spikes in the offers available at hotukdeals, so don't miss out. Check back when you need to update your tracker, and the latest Fitbit Versa deals will be at your fingertips.

The Fitbit Versa 2 combines the functions of an elite fitness tracker with entertainment and connectivity features you would expect to find in a high end smartwatch. Few wearables mix up heart rate tracking, sleep analysis, and in-depth weight loss routines, with Amazon Alexa, Spotify, and smartphone pairing, but that's what you get with the Versa 2. If all of that sounds good, be sure to seek out the best Fitbit Versa 2 price at the hotukdeals wearables listings.