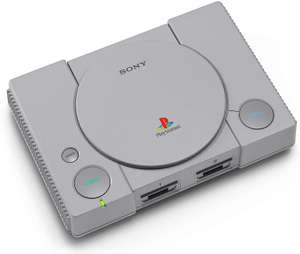 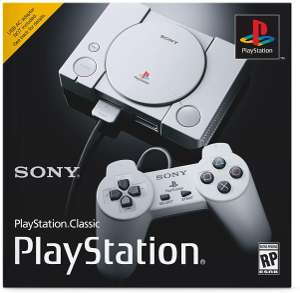 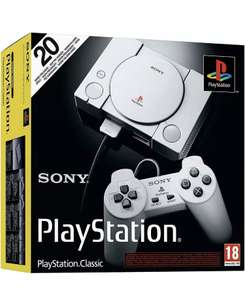 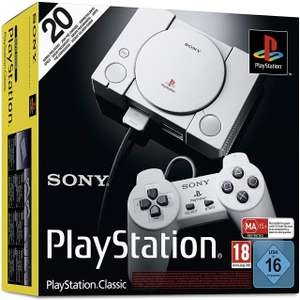 305° Expired
Posted 14th Oct 2020Posted 14th Oct 2020
PlayStation Classic Mini Console with 20 games built-in Used-Very Good £18.13 Delivered (£21.12 non-Prime) from Amazon (Sold by EverGame)£18.13Amazon Deals
Get in quick as there may not be many left. It is now getting really difficult to find these at a decent price unfortunately. 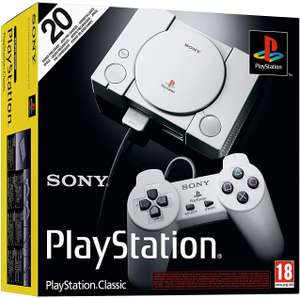 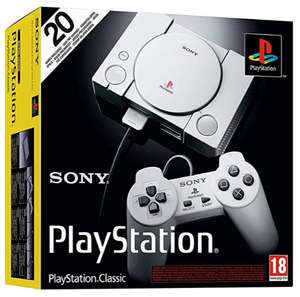 The PlayStation Classic: A Piece of Gaming History 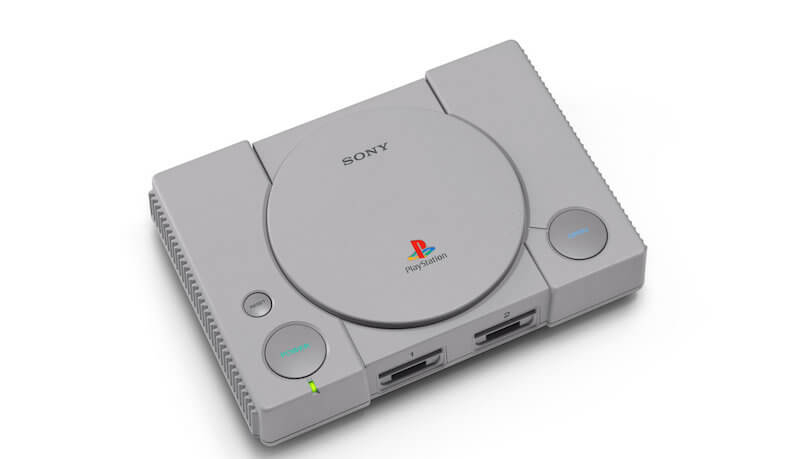 A Look Back at a PlayStation Original Console

Retro and nostalgia are big business at the moment and Sony is tapping into this with its PlayStation Classic. This is a perfect recreation of the original console of 1994 but 45% smaller. The shape, logo, layout, packaging and even the instruction manual are all the same. On top of this, your retro box includes two wired controllers, a virtual memory card for saving your gaming adventures and the latest HDMI cable for connecting to a TV. This small but powerful package is definitely a trip down gaming memory lane. 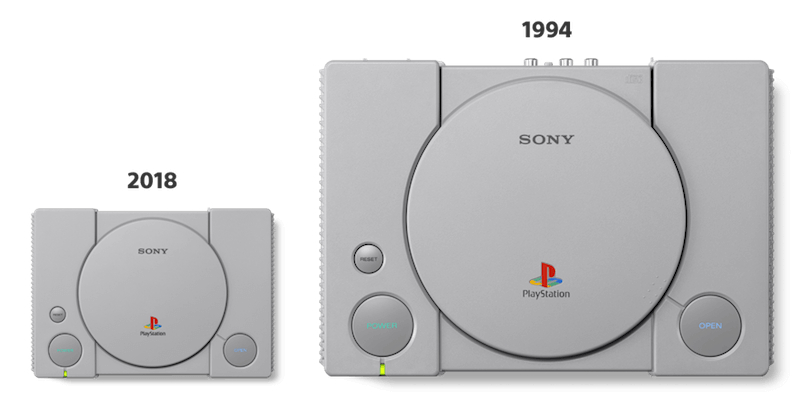 The release of the original PlayStation was definitely a world-changing moment in video game history. It saw a change from the weak visuals of the past to the real-time 3D graphics processing of the future. The talk started about this gaming revolution in March 1994 when Computer Gaming World published a rumour that the Sony PS-X would be released in Japan later that year. A Tokyo hotel saw Sony demonstrate its revolutionary product to gaming developers, many of which were keen to jump on board and develop their video games in conjunction with Sony. Two of these went on to become major partners, Electronic Arts in the west and Namco in Japan.

The 3D-capable, CD-ROM-based console was cheaper to manufacture than the cartridge system of Sony's rival, Nintendo while the price point was considerably lower than that of Sega's products. The Japanese release in December 1994 saw record-breaking sales, sales that were repeated when the PlayStation was released in the States and Europe the following year.

The CD format gave players games that were bigger and better than ever before and within a decade, over 100 million PlayStation units had been sold across the world. Fast-paced developments in controllers, such as the release of the Dual Analog Stick and the original Dualshock controllers in 1997, allowed even more gameplay opportunities for developers to explore. In pre-internet days, the release of the PlayStation Link Cable in 1995 allowed for competitive gaming even if two televisions were required.

Early games delivered an arcade-quality experience, the star of which was Core Design's Tomb Raider, which introduced Lara Croft to the world in 1996. The development of external memory cards with built-in screens and basic controls saw mini-consoles brought to the market in 1999 with the PocketStation. Released in 2000, PlayStation 2 took gaming to new levels with its HD 3D visuals and online play. This was followed six years later by the PS3 and in 2011 (Japan and the USA) and 2012 (Europe), the PS Vita became available. The PS4, realised in 2013, is the eighth generation Sony console. The PlayStation 4 Pro, unveiled in 2016, upgrades the PS4 and supports 4K gaming on 4K monitors or TVs, making it the most powerful PlayStation ever. 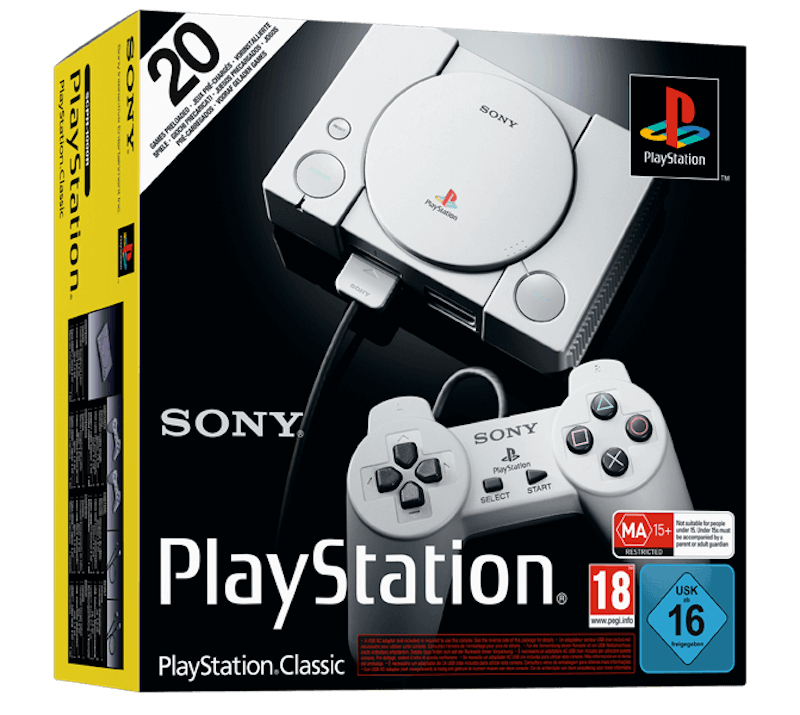 Both the PS3 and the PS Vita are excellent PlayStation alternatives for enjoying original games although Sony support for both will be withdrawn soon. In the short-term, the PS Vita delivers a handheld unit that is full of power and features a five-inch OLED touchscreen, as well as analogue sticks and a rear touch-pad. The PSP Go remains an excellent portable device for use on the move or connected to a TV and linked to a DualShock 3 controller.

A true full-size alternative is offered with the PS4, which by 2015 had become the biggest selling gaming unit in the world. For vibrant HDR visuals, integrated streaming and social media functions it still can't be beaten. Gaming is even better with the more powerful PS4 Pro, which supports 4K gaming as well as faster frame rates.

If, however, you want to sample the feel of a PlayStation original then the PlayStation Classic with its retro-style DualShock controllers could be for you. The gaming unit is an authentic scale model that has been brought into the 21st-century with the addition of an HDMI connection, a USB power cable and two USB ports for the wired controllers. You can save the progress of the 20 built-in games on virtual memory cards but the range of games can't be extended as there is no internet connection facility. 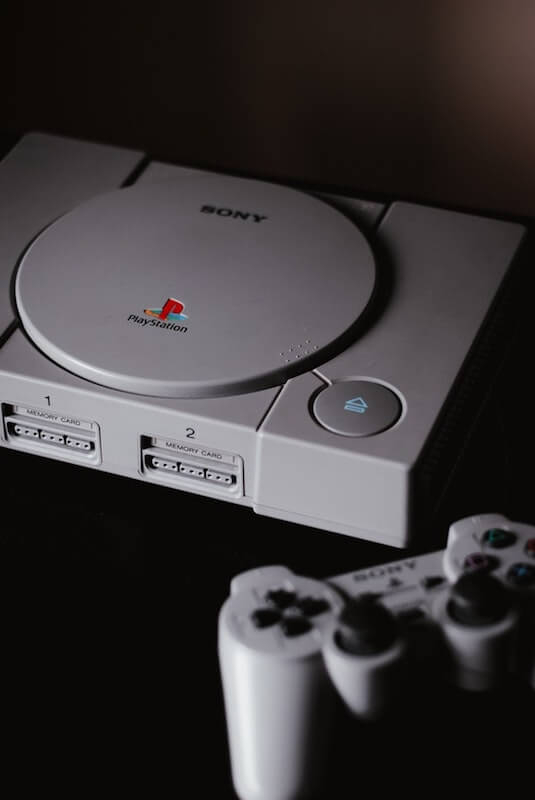 The 20 games confirmed when the European and North American editions of the PlayStation Classic were released are: 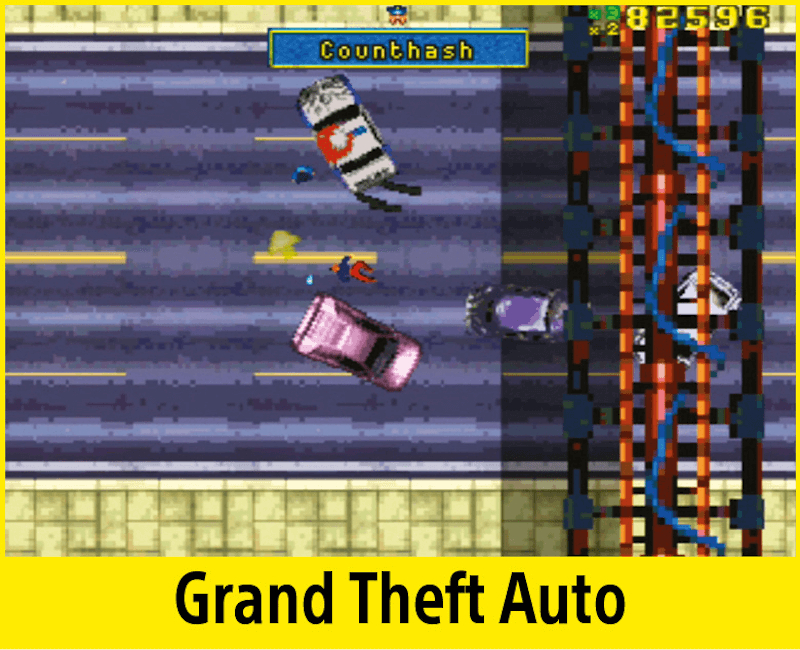 Contained in the box, which cleverly mimics the original packaging of 1994, are all the components you need to enjoy the plug and play PlayStation Classic to the max. All you have to add is a TV screen and a compatible USB AC adapter.

The main specs of the PlayStation Classic include: 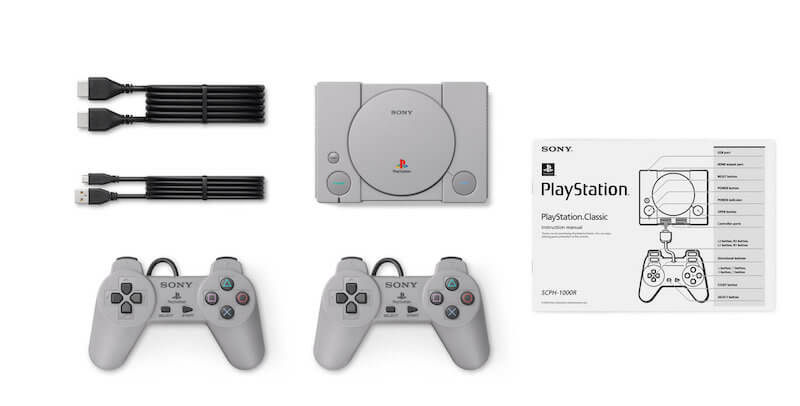 The PlayStation Classic with its preloaded games is getting a mixed bag of reviews.

Pros – If the history of video gaming fascinates you or you have a nostalgic hankering for the games of your youth, then you will love the PlayStation Classic. The games list is a real trip down memory lane and a chance to see just how far gaming graphics and images have come especially in their recreations of moving vehicles and the human body. For a digital archaeologist, Syphon Filter and Tom Clancy's Rainbow Six unearth the start of action adventures on the computer screen while the original PlayStation anthem on start-up is sure to send a tingle down the spine of any gaming enthusiast. Other strong pros are the aesthetics of the console and the fact that there are two controllers in every box. And, the mini size of the PlayStation Classic makes it an ideal travel companion.

Cons – For those of you used to modern gaming, the PlayStation Classic may feel a little limited. One of the main differences you will find is that there are no display options meaning you cannot change the resolution or ratio. This means that when games are played on your large LED TV screens they're going to appear a little juddery, chunky and tired. The texture resolution is low especially in vehicle and character mode so some images may appear as mosaics of strange shapes. As well as imaging, audio quality has its problems as well with music that slows down and racing sound effects that fade in and out. The controller cables could be longer and as the controllers are faithful recreations of the originals, they do not have analogue sticks which makes some racing games problematic. The disc tray is purely decorative and not functional so should you have some original PS1 games lurking around, you will not be able to play them on this console. In fact, once you have exhausted the 20 pre-loaded games, without an internet option you won't be able to download any more. Some reviewers also felt that this edition of the PlayStation Classic does not capture the iconic swagger and excitement of the original with some of the games 'ageing' badly. Another major drawback concerns the choice of games. Nine of the 20 games represented are European PAL versions that run at 50Hz. When running on the Classic's 60Hz output there is a significant slowing down in gameplay while images are squashed and video sequences appear to judder.

Which Retailers are Selling the PlayStation Classic?

With a release date of December 3rd, Sony obviously has one eye firmly on the Christmas market and major online and high-street dealers will be wanting to cash in on this market with some great deals. At hotukdeals, you can avoid paying the list price for your PlayStation Classic. To help you we've gathered together great deals on our merchants' pages from UK retailers that are showcasing the PlayStation Classic. These include Amazon UK, Currys PC World, Argos, Tesco, Simply Games, John Lewis, and Very.

Cut the Cost of Retro Gaming with PlayStation Classic at hotukdeals