The Galaxy S20+ takes the Standard Samsung Galaxy S20 and offers enhancements all round. Although it's not as deluxe as the S20 Ultra, the S20+ blows other phones out of the water when it comes to camera features, packing four lenses, multiple settings for different situations, and a zoom that won't miss a single detail. Sounds appealing? Anyone who wants to experience this high-end phone can find the very best Samsung Galaxy S20+ sale bargains at hotukdeals. 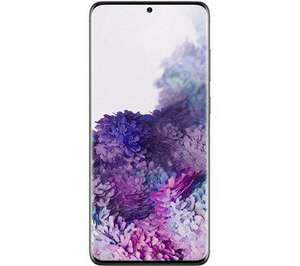 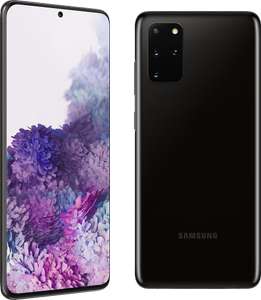 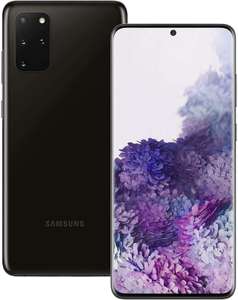 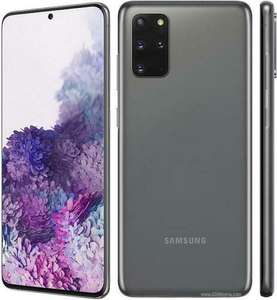 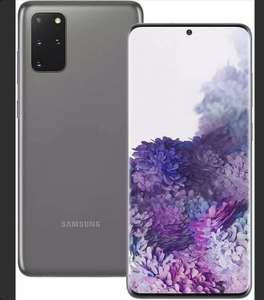 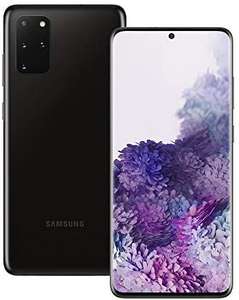 Zoom in on the Samsung Galaxy S20+ deals at hotukdeals

Samsung is one of the smartphone world's finest brands, competing with Apple for top spot. And the S20 range is its marquee offering for 2020. Sitting in the middle of the S20 trio, the S20+ is a premium phone in every respect, from CPU speed and refresh rates, to build quality and visuals. But as with all S20 phones, the camera is the centrepiece, offering extreme close-ups and plenty of other perks. It all builds on the S family, which has always been a step above other Galaxy phones, offering quality cameras, high speeds, and dependability since 2010. But has the pace of innovation slowed in 2020? Let's see what this year's model has to offer.

A Big Plus Point? Our Samsung Galaxy S20+ Review

Specs can dazzle buyers, while the actual performance of smartphones leaves a lot to be desired, so checking out feedback from the experts is always essential. Fortunately, the S20+ matches up real world performance and pre-release hype. The camera is a revelation. Crisp super HD video and snaps can be manipulated with ease, stabilisation means that even novices can capture flawless footage, while the x64 zoom is a joy to use. The speed of the phone also lets these features shine, without slow down. Streaming and gaming is also enjoyable, with the CPU handling demanding games, and the 6.7-inch screen never feeling cramped. And 188g isn't too heavy to carry and use regularly, while the 4,500mAh battery holds up well. Overall, there's a lot to love here.

These impressions have been backed up by the tech press, which has responded positively to the S20+. Pocket Lint praised the “punchy colours”, and the 120Hz refresh rate when using HD modes. Its reviewer also warmed to the Single Take function, which provides a selection of shots from HD footage, making it easier to choose a picture to suit every moment. Sure, the magazine found that the look of the phone wasn't as attention grabbing as the S20 Ultra, but the overall verdict was overwhelmingly favourable, and that's the consensus so far. This is a step forward for the Samsung S series, and smartphones in general.

Below you can find the complete Samsung S20 Plus Specs

The features of the S20 Plus are pitched above the standard S20 (which is still a formidable smartphone and not exactly an entry level device), but below the S20 Ultra. So take some time to compare models and decide which one suits your needs. As you can see, there's a lot going on inside the S20+, and in its sumptuous build quality. A 6.7-inch screen will feel large enough for comfortable movie or TV watching when you're on the move, and the phone has a super-fast refresh rate as well – a major factor when playing sports games or shooters. But the primary draw with any S20 phone lies in its photographic features.

The Galaxy S20+ camera steals the show, with four separate lenses on the main (rear) camera. This offers an impressive 12MP main lens, as well as telephoto zooms, and the ability to go closer than ever before, with a x64 zoom (while retaining HD resolution). The camera can also capture 8K footage, while Video Snap mixes photography and videography in a fresh way – making it easy to extract still images from video. It's never been easier to preserve real life as it unfolds, so say goodbye to posed selfies and lifeless holiday snaps. This is something new.

Lets take a look at the features in more detail:

Compared to the S20, the S20+ offers more all-round, but it's definitely a shadow of the deluxe S20 Ultra.

Anyone who browses the Samsung Galaxy S20 Plus deals at hotukdeals should also take a look at our guides to the S20 and S20 Ultra, before making a decision, as there are some important differences between them. Also, check out some phone from other brands as well, the iPhone Pro is a great alternative from Apple.

The Standard S20 is the weakest in terms of processing power and graphical capabilities. It still comes with a three-lens rear camera setup, which will feel advanced compared to bargain phones, but when you set it next to the S20+, there's a noticeable gap. The same goes for storage space and memory, which could dent performance when using more demanding apps or games. But if you aren't bothered about playing the most spec-hungry games, and you aren't making YouTube masterpieces, the S20 comes in significantly cheaper. It also has an impressive zoom and 5G options, so delivers much of what today's buyers will need.

Let's look at the specs in comparison. Below you'll find the specs compared for Samsung Galaxy S20 vs S20+ and S20+ vs iPhone 11 Pro.

Looking for the best S20+ deals, but wanna check out the Pros and Cons first? Check them out below:

How To Screenshot on Samsung Galaxy S20+

Taking a screenshot on the S20+ is easy. There's one main method which everyone can master, as well as a couple of alternatives. Follow these simple steps:

What Samsung S20+ Accessories Should You Purchase?

Almost everyone who purchases a high-end smartphone like the S20+ also ends up buying accessories to store, enhance, and protect their device. So why not make a few purchases at the same time you pick up a new smartphone? You may even find bundle discounts which include the handset as well as screen protectors and cases, so scour the hotukdeals Samsung S20+ deals to check for the best offers.

You probably won't make this error, but beware: the S20. S20+, and S20 Ultra all have their own dimensions, meaning that screen protectors and cases will vary significantly. As the names of the phone are very easy to mix up on first glance, take care when browsing deals.

The Samsung Galaxy S20 Plus: A Quick FAQ

Is the Samsung Galaxy S20+ waterproof?

Yes, the S20+ has been rated IP68, which means that it can handle immersion in 1.5 metres of water for a period of 30 minutes. It also has excellent dust resistance.

Does the Samsung Galaxy S20+ have wireless charging?

Yes, if users have the right Qi charging pads, they can charge their Samsung Galaxy S20 Plus without the need to wrestle with USB cables.

Yes and no. Not all S20+ models come with 5G compatibility, but the option is available. So if you need the most recent network standard on board, take care when selecting a model.

Sadly not. The 3.5mm headphone jack is ancient history where Samsung is concerned. Nowadays, it's all about Bluetooth 5.0.

Yes. The “global” version of the Galaxy S20+ has been designed to be dual SIM (but the US version is single SIM, confusingly).

When was the Galaxy S20+ released?

By now, you should have an idea about whether you need to invest in a Samsung S20 phone, and whether it's likely to be the Standard S20, the S20+, or the S20 Ultra. The S20+ is a great option for many buyers, with its cutting edge processing power and cameras, and a price point that's a few hundred pounds below the Ultra. But even so, this isn't a budget phone by any means. The entry level Samsung Galaxy S20+ price was pitched at around £1,000, with monthly contract payments of £30-50, putting the S20+ in the top bracket of UK smartphones.

However, that doesn't mean you need to head to lower cost manufacturers like Huawei or more basic Samsung A models. There are some ways to save on S20+ phones that can cause the price to plummet.

Firstly, it's possible to find great Samsung Galaxy S20 Plus deals if buyers are willing to sacrifice on specs. Non 5G models and those with less on board storage have lower price tags, and 128GB of space will suffice for people who aren't likely to stuff their phones with video. Checking out refurbished models may become a good money-saving option – and you'll be able to find second hand S20+ phones at outlets like GiffGaff or HandTec.

More importantly, UK smartphone retailers constantly advertise promo codes for Samsung Galaxy S20+ deals. If you want a seriously cheap Samsung Galaxy S20+ phone, these are the deals you need to know about. hotukdeals offers a continuously updated list of the latest deals from merchants like Carphone Warehouse, Mobiles.co.uk, WowCamera, the O2 Shop, Currys PC World, and the Samsung Store.

There are deals for contracts as well as handsets alone, so it's a good idea to weigh your options. Going SIM free can sometimes work out cheaper, but you won't usually get upgrade discounts unless you have a contract. And remember to check for accessories. They often come as add-ons to phone purchases, but hotukdeals features cases, chargers, and screen protectors as well. Snap some up to enhance your purchase.

Finally, some retail events see massive price reductions for the year's most popular phones. If you're struggling to afford a Galaxy S20+, waiting for Black Friday/Cyber Monday in November could be a good call. It's prime bargain hunting territory for digital devices. But Amazon Prime Day can see big reductions, while the New Year is also a good time to shop.

Whenever you choose to make a purchase, and however you do so, hotukdeals is here to guide you towards the lowest prices. So don't pay full price. Upgrade your phone for less by shopping around for the best deals around.

The Samsung S20+ mixes a 6.7-inch high resolution AMOLED screen with a super-fast Snapdragon processor, a refresh rate that can handle multi-tasking and the most complex games, as well as wireless charging and impeccable water resistance. On top of that, there's a quad lens camera that can zoom in or out, stabilise footage, and apply all sorts of effects. If you want to enjoy these features (and more), be sure to check out the wide range of Samsung Galaxy S20 Plus offers at hotukdeals.