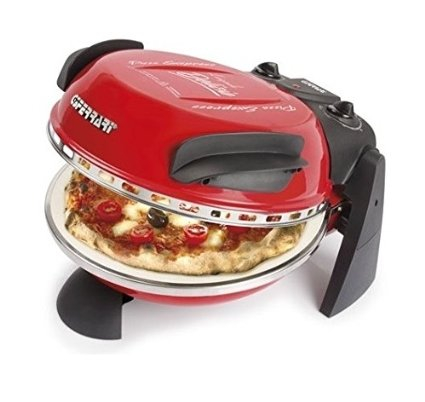 28/10/2015 Amazon.it have dropped the price down to just under 73 Euros, so with delivery it's about £60 at the moment. If you were thinking of treating yourself (or someone else) for Christmas, now looks like the time to buy.

07/10/2015 I've updated the price to £71, reflecting current euro price in Italy and exchange rate of approximately 1.35 to the pound. It's still miles cheaper than the lowest price Amazon UK seller, and a family of four should easily recoup the outlay after a few skipped Dominos take-outs.

This is a deal for the true pizza lovers out there who have been struggling to perfect their home baked pizzas from scratch. I've been making pizzas at home for several years and have always suspected that my oven simply doesn't get hot enough to do a proper job, even after pre-heating with pizza stones in the oven for a good hour.

I've been aware of the G3 Ferrari Delizia Pizza Express for a couple of years, but it's always been around £90-100 from Amazon UK, or more from other UK suppliers. Given that it's just a two element grill with a stone on the bottom, I could never bring myself to pay that much for it, even though the reviews are overwhelmingly good. Well, I've had it for a week now, and I can promise you that it is the real deal. Crispy on the bottom with a puffed-up light and airy crust and juicy melted toppings, grilled to perfection.

I make my dough in the morning with cold water and leave it in the fridge all day, taking it out to split into 220g balls at room temperature about an hour before stretching into shape. I use the Lehmann pizza dough calculator for my ratios here pizzamaking.com/dou…tml. I also bought two large £8 wooden peels from Amazon UK, one for making and sliding on, with another for taking off. This way you can produce continuously, one after the other. There is a knack to using the G3 whereby you need to make sure the stone is not too hot and the top grill is red hot throughout cooking. There's plenty of discussion on this in the Amazon reviews. I use an infrared thermometer the check the stone is not hotter than 250c to prevent burning.

Now that the exchange rate between the pound and the Euro is in our favour for imports again, this Italian manufactured appliance has dropped in price to the extent that it cost me only £67 to buy it from Amazon.fr including shipping. Pay in Euros and let your bank do the conversion instead of Amazon's rip-off rate. It doesn't matter if you order from France, Spain, or Italy. it'll be sent from Italy anyway. Just go for the cheapest 'sold and dispatched by Amazon' price.

If you're serious about making pizza, buy this thing now - you won't regret it.

UPDATE
Loads of HUKDers have bought these now and had them delivered. Check through the thread to see the kind of results they've been getting - real Neapolitan style pizzas at home!

Fitting a UK plug with the earth cable connected seems to 'upset' some people's contact breakers, so best to use a converter for visitors to the UK - available at Poundland, or don't connect the earth if you feel safe doing it.

The dough is even better if you make it well in advance. Prove it in the fridge for 24hrs and take it out to let it warm up for a couple of hours before stretching.

The top grill element needs to be glowing red hot all the way through cooking, if you don't like the crust too dark, whip some aluminium foil underneath part way through so the top can catch up without burning the bottom.

26/08/2015 UPDATE on using CAPUTO '00' FLOUR
Quite a few HUKDers have been getting hold of Caputo 00 flour, the genuine pizza flour from Naples. This flour appears to be considerably less absorbent than very strong bread flour, so you need less water in the mix. If using the pizza dough calculator, start off with a 55% hydration rate and adjust up/down to get the dough rolling around the mixer nicely and coming away from the sides.