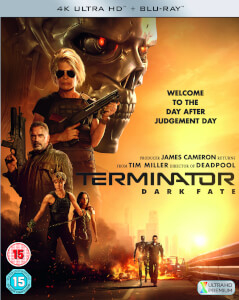 Quite a few to choose from including classics such as Scarface, Goodfellas and Casino as well as more recent films.Strangely Terminator: Dark Fate is included despite it not releasing until March 2nd. If choosing that and another film, it’s a nice £10 saving on Terminator compared to everywhere else.
PostTweetShare Share with WhatsApp Share with Messenger
Community Updates
Zavvi DealsZavvi Discount Codes
New Comment Subscribe Save for later
32 Comments
23rd Jan
+£1.99 delivery?
23rd Jan
4K Ultra HD yes but can anyone tell me if the digital copy for it, will also be at 4K Ultra HD? Or simply, in HD? Thanks.
23rd Jan

There is no digital copy
23rd Jan

There isn’t a digital copy given on the UK release. Think it’s only given with the US release.
23rd Jan

There is no digital copy

On some there is, it is open to many different films, not just 1 in a random pic up.
23rd Jan

You meant in general not specific to Terminator, I see now. It depends entirely on the film and on the service you redeem it on. Generally, if you are redeeming on iTunes, and the film has a 4K version available, you will get the 4K digital copy. If a 4K version isn’t available, when one is, it will be upgraded to 4K for free. Google Play is more limited in this regard however.
23rd Jan
Doesn't work 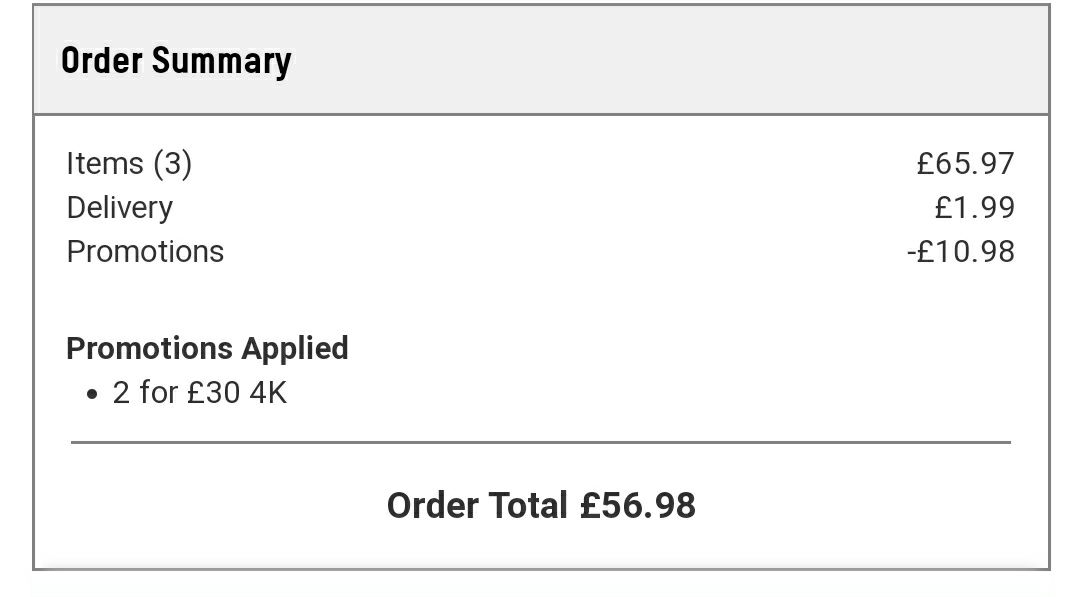 What is the 3rd item in your basket?
23rd Jan

What is the 3rd item in your basket?

Shypt, read it as 3 for 30! Thought that was back, eh £15 each I can wait
23rd Jan
Like how Everest 4K is on their list £19.99 you can buy it at a few places for £4.99 today. I actually paid £3.99 for it.
23rd Jan
Voted hot / ordered.
Yes us chumps in the UK get no digital downloads included nowadays, whereas the USA and other regions will get a 4k digital download included at 1/3 of the price we pay!
Why is it the UK gets shaftd everytime?
23rd Jan

It’s since Flixster closed I think. We haven’t got a platform like Movies Anywhere like they have in the US so we’re waiting on an alternative I guess (if one appears that is). Hopefully something pops up soon though.
23rd Jan
I noticed this yesterday but said nowt incase it is cancelled. Free delivery with red carpet.

I ordered this with Expendables since that seems to be 20 a lot. Worked out at £11.70 for it and £18.30 for the preorder which is still cheap.
Edited by: "stingersplash" 23rd Jan
23rd Jan
Terminator Dark Fate is one poor film in case anyone is thinking of ordering it - craps on the first two terminator films pretty quickly and continues to go down hill from there on in (and I will not give any spoilers - you can discover the smell yourself...)
Edited by: "Darthpeter" 23rd Jan
23rd Jan
Terminator Dark Fate sucks, don't preorder it.
23rd Jan

It's full of 'strong, powerful females' in lead roles. That makes it illegal to say anything negative.
Your gonna get locked up and made to watch Ghostbusters 2016 on repeat.
23rd Jan

And you have to watch black panther.
23rd Jan
I think im missing something in this. Where is the bit where i get paid to watch dark fate? The title says i have to pay for it which cant be right???
23rd Jan
I enjoyed the first half of Terminator Dark Fate but then it all went a bit Tracey Beaker
23rd Jan
Not really a comment on the deal as such, but no wonder video piracy is so prevelant if studios release at these prices and think its a good deal.
24th Jan

I'd say £15 for a new release 4k is a steal. This is a mistake it shouldn't be in the offer.
Personally I'm happy to pay to own something and piracy can't match the real thing for me.
24th Jan

And I thought it was pretty decent, opinions eh.
24th Jan

And I thought it was pretty decent, opinions eh.

Personally I enjoyed it, was good to see some stuff in the novels come into the series. I can understand why the intro put people off but I think one of the previous cast may have been a little unreliable to come back.

Was hoping Doctor Sleep was going to be in this deal too sadly nothing else took my fancy to make me grab Terminator right now.
24th Jan

Agree - I really liked Doctor Sleep. It’s being released as a Director’s Cut with 24 minutes of extra footage - can’t wait to see that.
24th Jan 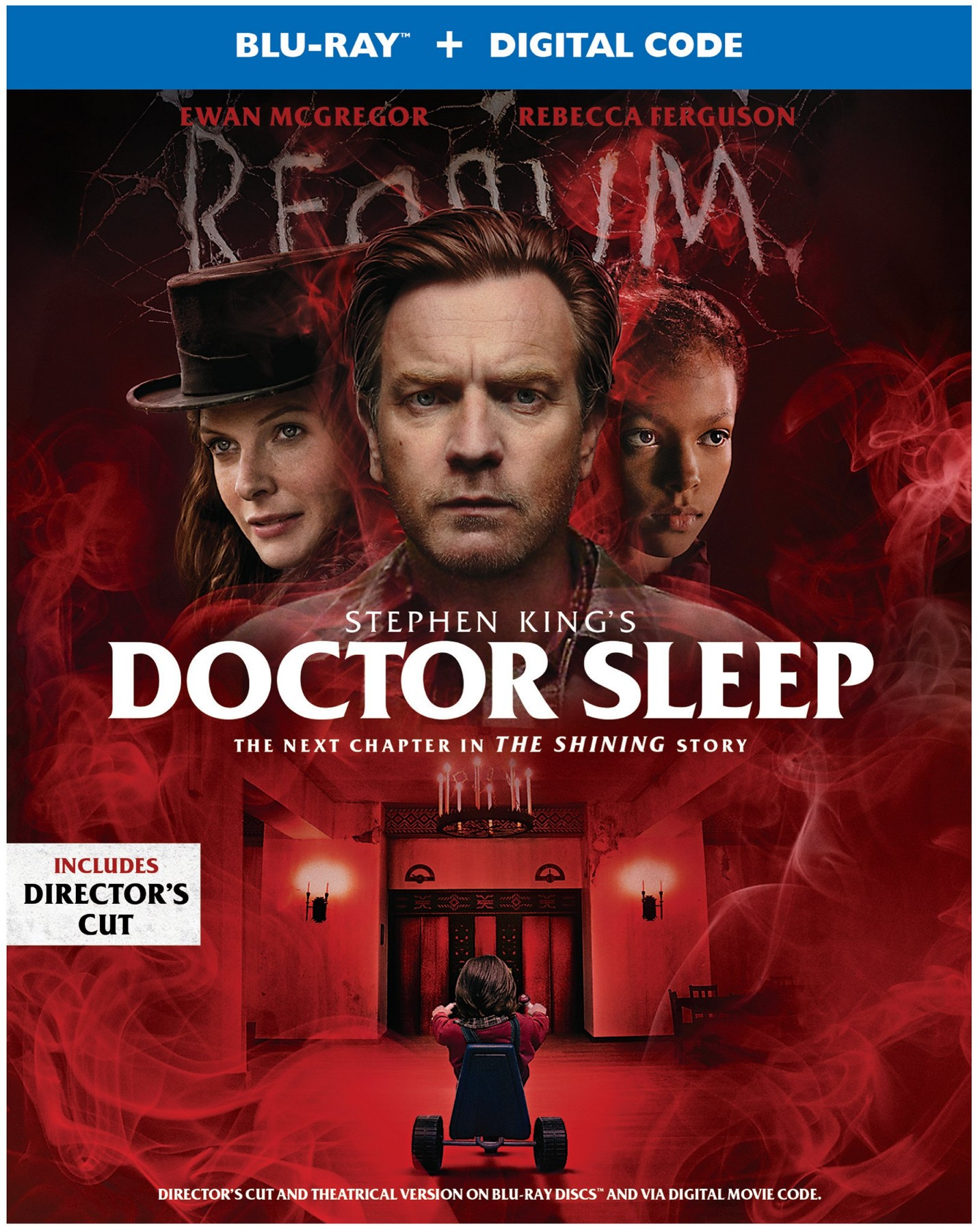 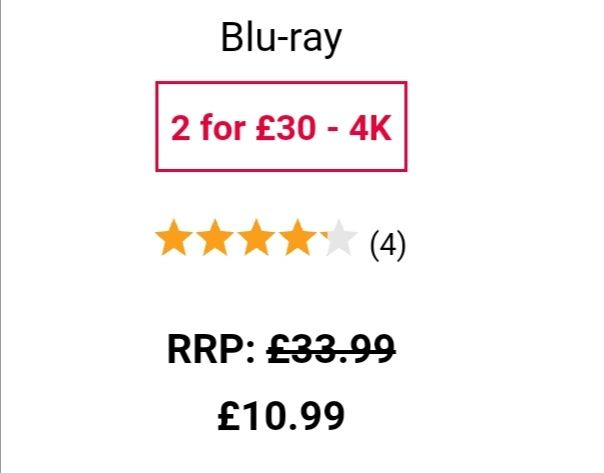 I think zavvi need to work on their maths
27th Feb
Just got my dispatch email. They honoured it.
3rd Mar

Just got my dispatch email. They honoured it.

It wasn't a mistake and its currently in the 2 for £30 at amazon.

Zavvi removed it from the promo shortly after I posted so it looked like a mistake.

Seems it’s been removed from Amazon’s promotion now too. hotukdeals.com/com…424

Weird how they’ve both only had a limited amount of time in the offers.
3rd Mar

Haha that's nuts amazon removed so soon, I managed to get it from amazon in the 2 for 30 as I missed the zavvi deal