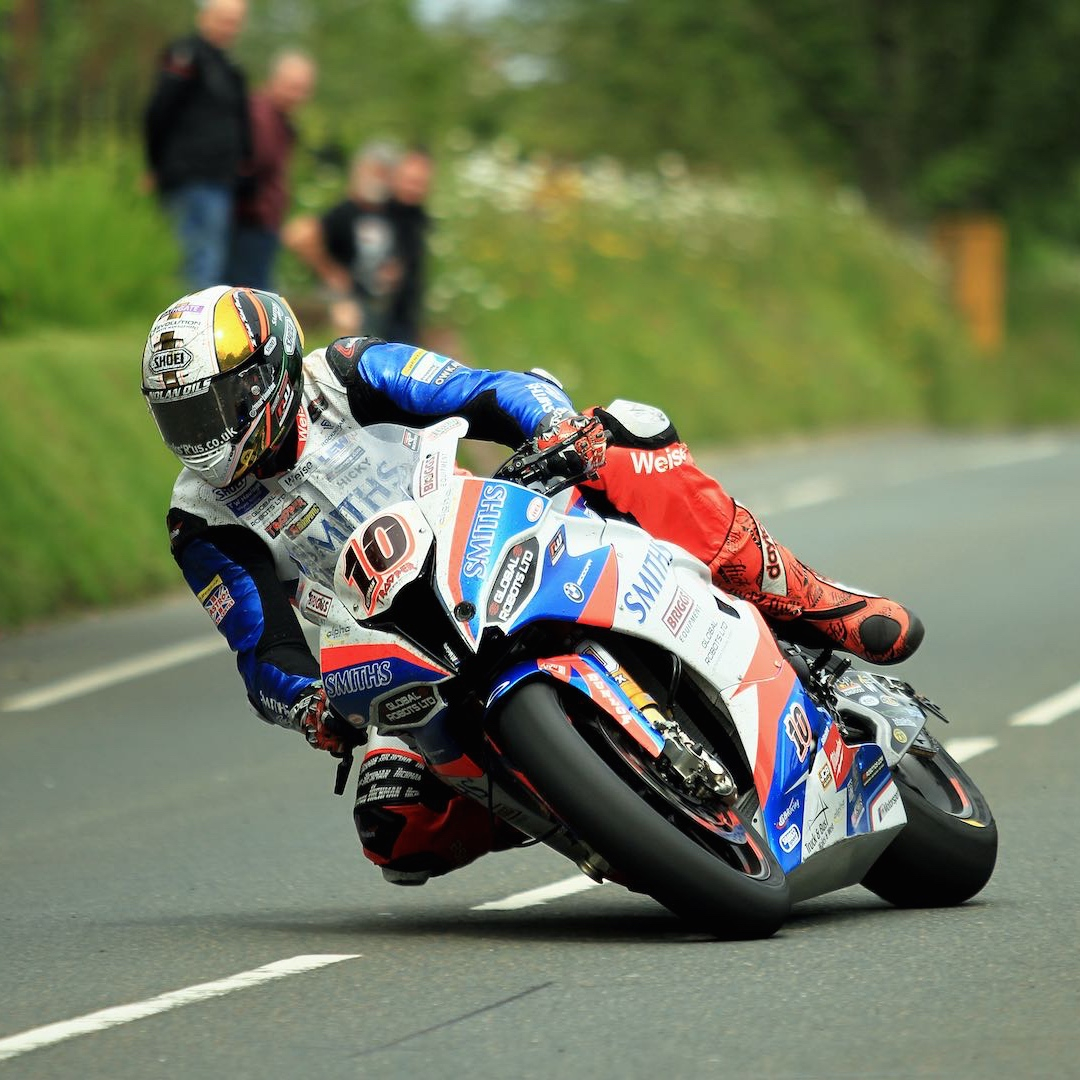 With no races this year, Isle of Man TT races are bringing you 8 evenings of exclusive TT-themed entertainment with the TT Lock-In starting from 6th June and running until the 13th June. There'll be history, virtual racing, interviews with stars from past and present, and much more via the Official TT website iomttraces.com, Facebook page and YouTube channel. 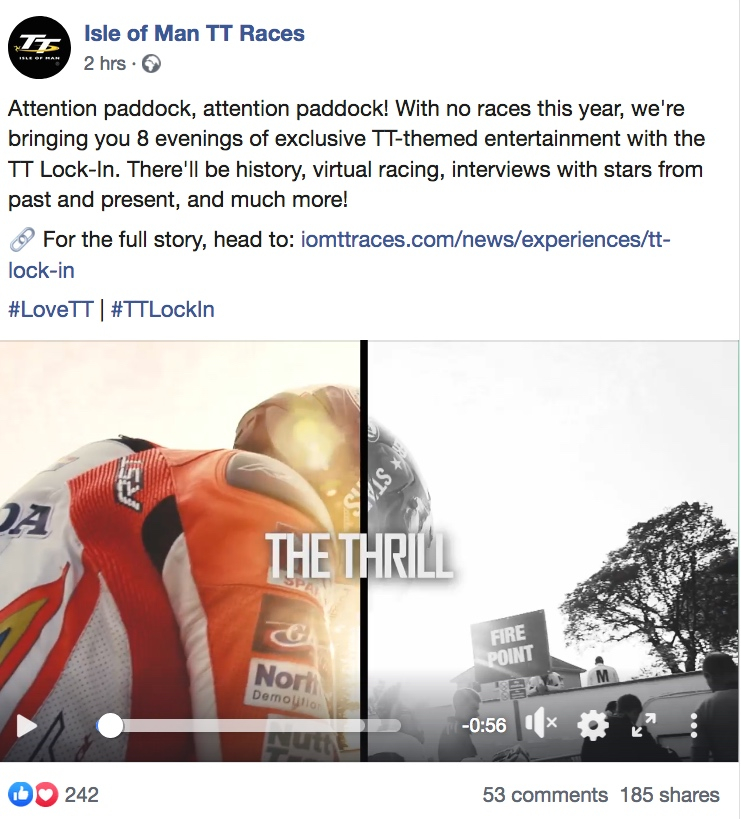 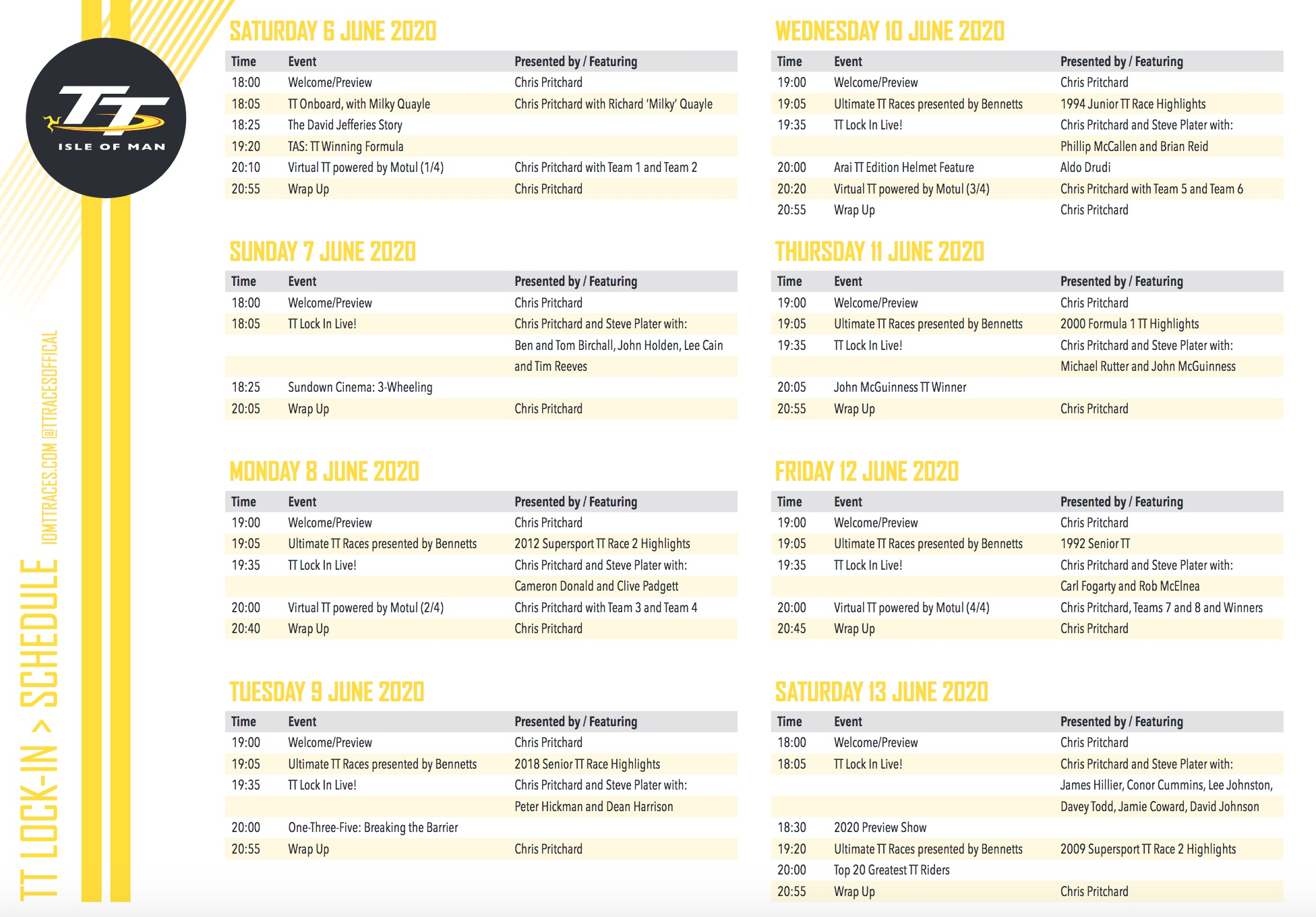 Chris Pritchard will be the host for the eight nights of TT content, and he will be joined by double TT Race winner Steve Plater for insightful interviews and indiscreet revelations with some of the riders that have created the headlines over the last twenty years. The ‘Ultimate TT Races presented by Bennetts’ series turns the clock
back on the greatest recent, and not so recent races. ‘TT Lock-In’ will be revisiting classic footage from five great races including the 1992 Senior TT, featuring the head to head between Carl Fogarty and Steve Hislop and the race that many believe is its closest challenger for the ‘greatest race’ accolade – the 2018 Senior TT.

Other races featured in the Series include highlights from Joey Dunlop’s memorable 2000 Formula 1 win, the dramatic and controversial 1994 Junior TT Race and the 2nd Supersport Race from 2012 – the Australasian battle between Cameron Donald and Bruce Anstey that produced one of the closest finishes in TT history.

Broadcast live via the TT Lock-In virtual studio, Chris and Steve will be joined by a ‘who’s-who’ of TT racing to provide their own unique views and personal insights to the series. Including the chance to submit their own questions and messages, fans will hear from John McGuinness, Dean Harrison, Carl Fogarty, Phillip McCallen, Rob
McElnea, Peter Hickman, Brian Reid and Cameron Donald as well as multi-sidecar TT race winners Ben Birchall and Dave Molyneux.

Meanwhile, the world of Gaming will provide fans with their TT racing fix of another kind. The ‘Virtual TT powered by Motul’ will see 8 TT heroes, including Peter Hickman, Conor Cummins and Davey Todd, getting to grips with a new challenge and tackling the familiar course from the comfort of their own homes. Each of the TT Stars will team up with an experienced gamer and go head to head in a competition to be crowned ‘Virtual TT 2020 Champion’.

There’s also an introduction to racing on the Mountain Course for real from TT rider liaison officer, and former TT Race winner, Richard ‘Milky’ Quayle who will provide his unique insight into how to prepare to race the TT Mountain Course.

In depth features and documentaries on teams and riders include a look back at the lap record breaking 2018 TT - ‘One-Three-Five: Breaking the Barrier’, a tribute to one of the Greatest riders in TT history – ‘the David Jefferies Story’ and a celebration of the career of the 23 time TT Race winner John McGuinness. The spotlight will also be
turned on one of the TT’s most successful Race teams - ‘TAS: TT Winning Formula’.

There will also be a digital version of the popular TT paddock attraction, the ‘Sundown Cinema’, with a screening of ‘3 Wheeling’ – the feature-length film that follows the high drama of the 2016 Sidecar TT Races while Arai take us behind the scenes with the renown Italian Helmet designer Aldo Drudi whose creations feature in the limited
edition Official TT Helmet collection every year.
PostTweetShare Share with WhatsApp Share with Messenger
Community Updates
YouTube Deals
New Comment SubscribeSave for later
6 Comments
27th May
Thank you for the heads up
27th May
“One wheel when I’m on one of those”
27th May
Thanks!
27th May
Thanks can,t wait for my TT fix
27th May
What a bloody brilliant idea

28th May
Thanks for that