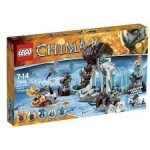 Half price, del is free on £50 spend or £3.95 under. You'll get a free Battle Station or if you spend 1p more, you'll get a Robin's Mini Fortrex set instead, they have a cheap Lego Chima Icebite Key Chain for £1.49 or a LEGO® Star Wars™ Boba Fett™ Magnet for £2.49 which you could add to qualify for the better free gift. (will pop links to all in 1st post)
The set is around £12 - £17 more elsewhere & the free gifts are only available from Lego Shop themselves.
Ages:7-14 - VIP Points: 24 - Pieces:621
Rinona has been captured by the Mammoth tribe and imprisoned in the awesome Frozen Stronghold. Rush to rescue her with Rogon in his powerful Rhino Roller, but beware—the Mammoths are well-equipped to defend their icy fortress. Evade blasts from the trunk’s stud shooters and the rotating disc shooter. When the Mammoth Tusk Flipper is launched, swerve clear before Maula can activate the flipping function to tip the Rhino Roller over. Once inside the stronghold, grab the precious CHI crystal, release Rinona from the frozen prison turret and then make your escape! Includes 5 minifigures with assorted weapons and an accessory: Rinona, Maula, Mottrot, Vardy and Rogon.

Legos not all about profit, its actually made for kids...
20th Feb 2016
It won't be either/or with the gifts, spend over £25 and you'll get them both.