All Nutella Discounts, Offers and Sale - May 2022 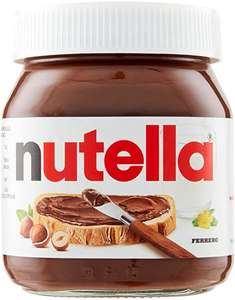 In case you're even vaguely interested, it's Turkish for "bring" (nerd)

Exactly! What a load of rubbish. Things are bad enough as they are and they think there are lots of people willing to pay extortionate prices for a limited range of items. 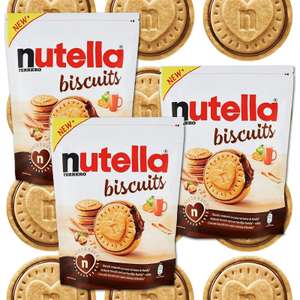 remmber to use code YBFIRST for 5% off

These really are dangerous. Best biscuits

fine i guess I've to get some

Could always try these (shock) 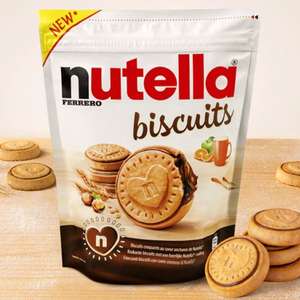 Yeah they have them in Farmfoods I think they were £2.99 a pack. Seen 2 days ago.x nom nom. Yu

This one is made in UK, usually inferior quality (when compared with Italy/France). (If you do not agree, just compare a UK made Kitkat with one from a different country).

I got one of these a while back for a £1 using a voucher, they are incredibly moreish (lol) But I don't get the high price, why is this almost £3 now (annoyed) Amazing biscuits but can't recommend due to the unrealistic pricing :( 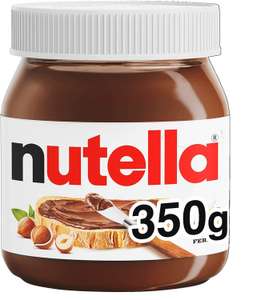 384°
Posted 24th AprPosted 24th Apr
Nutella Hazelnut Chocolate Spread, 350g £1.99 @ Amazon (£1.69/£1.89 subscribe and save)£1.99£2.8931% offAmazon Deals
Product Description Nutella Hazelnut Spread with Cocoa, Each jar of Nutella contains 7 quality ingredients that have been carefully selected and nothing else. Nutella is famous for its authe…

For reference after fairly extensive taste tests amongst a few friends the general consensus was that we actually preferrred the Lidl own brand version (Chocco Nussa) They are still pretty similar.

These are available at food warehouse if anyone is interested

It's 2x 950g rather than 2kg https://www.amazon.co.uk/dp/B008NF1YZE/ref=sspa_dk_detail_0?psc=1&amp;pd_rd_i=B008NF1YZE&amp;pd_rd_w=livi0&amp;pf_rd_p=fc28fb1f-eaf1-44ba-8c0f-8dc8e483696d&amp;pd_rd_wg=kBdls&amp;pf_rd_r=RKSXJH3Y16B9PS0KYJ3C&amp;pd_rd_r=51cc69f2-ccb5-4ee7-a226-dcc0fe8ab3fc&amp;spLa=ZW5jcnlwdGVkUXVhbGlmaWVyPUEyM1FQNlMxQzBUSTBGJmVuY3J5cHRlZElkPUEwMzM0NDcyM1RBMk5QWE9BOTNVOCZlbmNyeXB0ZWRBZElkPUEwOTQ0NjQzMlpaSEJQRjBIOVpPTyZ3aWRnZXROYW1lPXNwX2RldGFpbF90aGVtYXRpYyZhY3Rpb249Y2xpY2tSZWRpcmVjdCZkb05vdExvZ0NsaWNrPXRydWU= 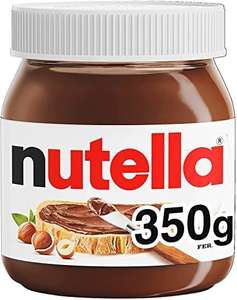 If consumers stop buying palm oil products, they'll rip up forests to grow something else instead.

A pleasant, but unlikely scenario really!

None of those listed in my yogurt. It's mostly cow's milk, fruit and a bit of sugar, and only 3 or 4 other minor ingredients. Just trying to balance Enterpart's claim that "HALF OF ALL DESERTS IS SUGAR".

blahblahblah1234: Hmmm, not sure I can agree with you (confused) My yogurt has 11.7% sugar and 1.7% fat, and the rest seems pretty healthy. Some of the humour here has gone over your head. There's no need to get all SHOUTY and rude. Just to add... fat IS healthy. We need it to absorb some vitamins etc. The low fat products are made of water and cord flour or similar GMO powders instead of natural ingredients. So don't be scared if there is natural fat in your food that comes from milk or meat(and not processed corn seeds etc.) 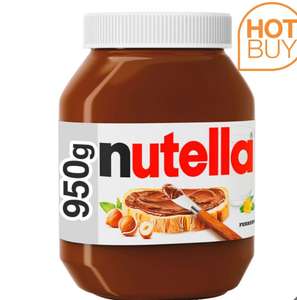 it contains palm oil, which is not good.

Too much Hazelnut in it for my liking ;)

Nutella is a hazelnut and chocolate spread that is manufactured by the Italian company Ferrero. Available in jars or in handy snack containers, Nutella is a favourite among kids and adults all over the world.

This buyer's guide will explain how to find the cheapest Nutella deals, as well as suggesting some potential gift purchases for Nutella fanatics.

Nutella is one of modern Italy's greatest exports. It was probably first produced commercially in 1965 although its origins lie further back in time. Just after WWII, baker Pietro Ferrero created a spread named Pasta Gianduja on his Piedmont premises. At the time, Ferrero was seeking to economise. The post-war Italian economy couldn't afford to import much chocolate, and Ferrero thought that hazelnuts might make his stocks go further. He had no idea how right he was.

This Gianduja soon became a proprietary product called “supercrema” which formed the basis for Ferrero's sweets. In a slightly altered form, it became Nutella in 1965, and Ferrero began exporting it all over the European continent, where its unique blend of nuttiness, chocolate and sheer sweetness became a breakfast staple.

These days, it has lost none of its popularity. In fact, Ferrero consumes a whopping 25% of the global hazelnut supply, and have opened plants in North America, Australia, Brazil and a variety of European nations.

How is Nutella Made and What's In It?

The frustrating answer to this question is that we don't really know how Nutella is made, although we have a pretty good idea. That's because Ferrero closely guards its trade secrets, aiming to prevent the competition emulating their hazelnut infused delicacy.

However, they are fairly upfront about the ingredients, which include sugar, chocolate, hazelnuts, palm oil, milk, lecithin and vanilla. If you don't already know, lecithin is what's known as an emulsifier. It also helps to make the mixture smooth and even, and you'll find it in almost all commercially made spreads for these reasons.

The precise way that these ingredients are turned into Nutella spread remains a mystery. We know that the cacao needs to be processed and the butter removed. We know that the nuts need to be cleaned, inspected, roasted and ground. Then the chocolate, milk, nuts, vanilla and lecithin are mixed together to create a paste. Palm oil is also added to keep the mixture nice and stable at room temperature.

Beyond that, we're not sure. But what's clear is that the process has been taking place for decades and produces a reliable, popular product.

The Different Types of Nutella Products

Nutella makes a wide range of products based on their iconic spread, and here are the main options available for UK confectionery fans: 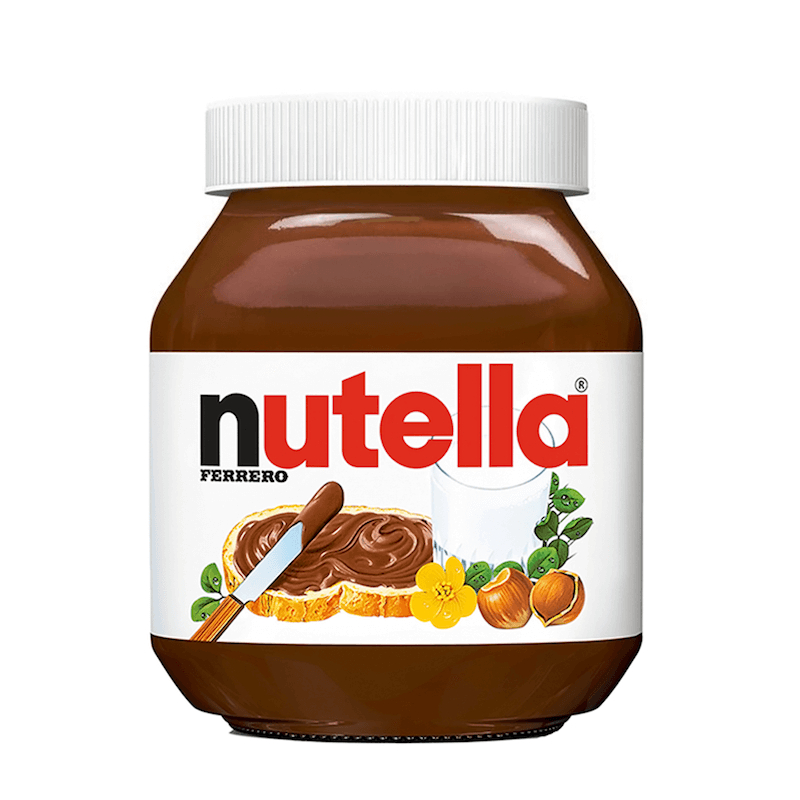 What if your spouse or children adore Nutella, and you want to incorporate the spread into a Christmas or birthday gift? Well, aside from wrapping up a tub of the spread (which isn't a very creative gift idea), there are some things you might want to try, although they may require a little bit of creativity on your part. Here are some popular suggestions.

Unsurprisingly for such a sweet, delicious and addictive treat, Nutella is a fairly calorific food. On average, 100g of Nutella contains 546kcal (around 5 bananas). However, even the most passionate fan would struggle to consume 100g of Nutella in one sitting (although many of us have tried). A recommended serving size of 15g contains just 81kcal, and is enough to coat a slice of bread for a Nutella sandwich – so, eating the spread doesn't have to be a catastrophe for your waistline.

If you struggle with portion control, there are some things you can do that will allow you to continue to enjoy Nutella and fight weight gain. Most importantly, you could switch from larger jars to 15g sachets. These portion-sized containers will make you remember the recommended intake, and help to limit your consumption... at least in theory.

Nutella is delicious, but is it the only chocolate spread on the scene? Far from it. Although no-one knows the exact recipe for Nutella, many have sought to imitate it over the years, some successfully, and some dismally. Here are a few popular competitors:

How can you buy Nutella as cheaply as possible? Well, don't just head straight to the nearest supermarket and grab a jar off the shelf. It may be tempting, but this isn't a great solution for bargain hunters.

Instead, think about taking advantage of money-off or multi-buy offers. Head to the Nutella HotUKDeals listings and you'll find a constantly changing range of discounts from major UK merchants like Tesco, Sainsbury's, Morrisons, Waitrose and Lidl as well as online sellers like Amazon and delivery firms like Ocado.

If you've become a fan of Nutella and Go, supermarkets like CostCo regularly run generous multi-pack savings, which is a good way to save money on lunches. The key thing is to stay on top of current deals and pick the best ones as soon as they become available.

If you have a birthday coming up and need to buy Nutella in bulk for cookies or cakes, think about ordering in advance when deals are available, not just before the event. Remember, you can store Nutella for months without it going bad, so buy when the product is cheap, not just before you need it.

Nutty Chocolate Delights with the Nutella Discounts at HotUKDeals

Nutella is one of the most delicious spreads around. Whether you love to smear it all over croissants in the morning, dunk breadsticks in it at lunchtime or turn it into irresistible cheesecakes for parties and dinners, you can always find the cheapest Nutella products at HotUKDeals.