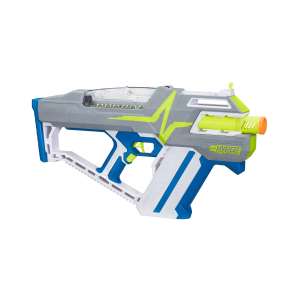 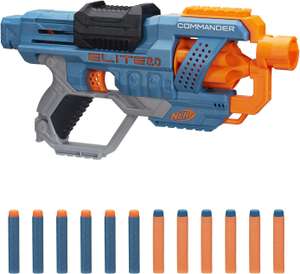 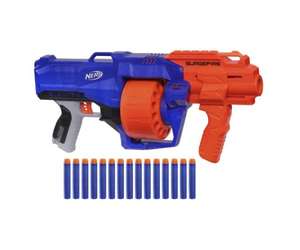 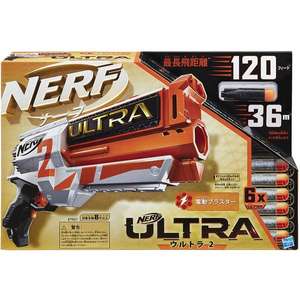 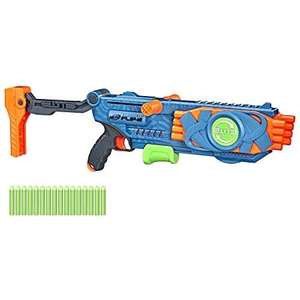 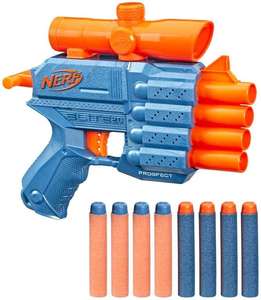 Nerf: Foam Gun Fun (And More) For All Ages

Nerf is the world's leading manufacturer of foam-based toy guns and bows, providing youngsters with a safe way to roleplay all kinds of storylines with friends and family. As well as their famous foam guns, Nerf also manufactures the Super Soaker line of water pistols, so there's a Nerf product for all seasons. This buyer's guide will introduce the many Nerf collections and some of their most popular weapons, as well as providing some handy advice about how to find the best deals on Nerf toys. 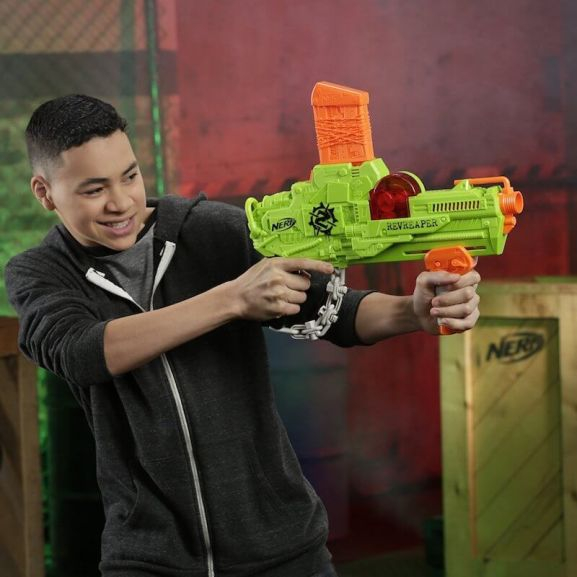 The History of Nerf

The Nerf brand was born in the late 1960s when inventor Reyn Guyer approached the Parker Brothers company with a radically new product. Guyer wanted to create a safe indoor volleyball game and had developed a form of foam that seemed ideal for the task. Parkers weren't so sure about the volleyball side of things, but they loved the foam. Seeing all sorts of applications, they bought the design and began marketing a range of indoor toys that were safe and unlikely to break fragile items.

However, the first Nerf guns didn't appear until the brand was taken over by Larami in the 1990s. They quickly became a sensation. Using distinctive pump action mechanisms, Nerf blasters were introduced, which fired soft darts and balls at high speed for surprisingly long distances. Nerf has since been taken over by toy giant Hasbro and the brand continues to grow strong under their leadership. They continue to add a huge variety of blaster styles and sub-themes to the Nerf collection.

What Kinds of Toys do Nerf Make?

While Nerf started out as specialists in guns and bows, they’ve since branched out to other products. In fact, they’re just as well known for their Super Soaker water pistols as they are for their soft-foam toy guns.

Nerf's foam-based weapons feature a specially developed material which is extremely lightweight, yet heavy enough to move aerodynamically, travelling up to 120 feet in one shot. The foam is composed of aerated polyurethane plastic and is harmless when it makes contact with somebody after being fired. 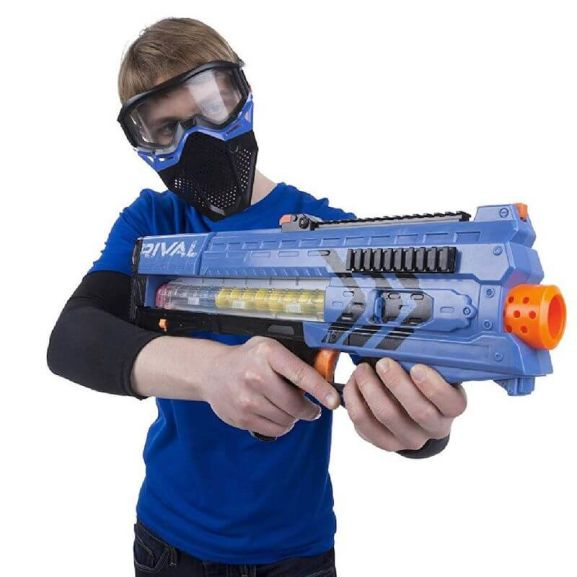 Which Nerf Gun Is The Best?

Nerf has created hundreds of toy guns over the years and their current range is massive. The right choice for you is a matter of how you plan to use your toy gun and, ultimately, a matter of how old the person using the Nerf gun is. Here's an overview of some of their most popular collections to give you a head start when shopping for Nerf bargains. 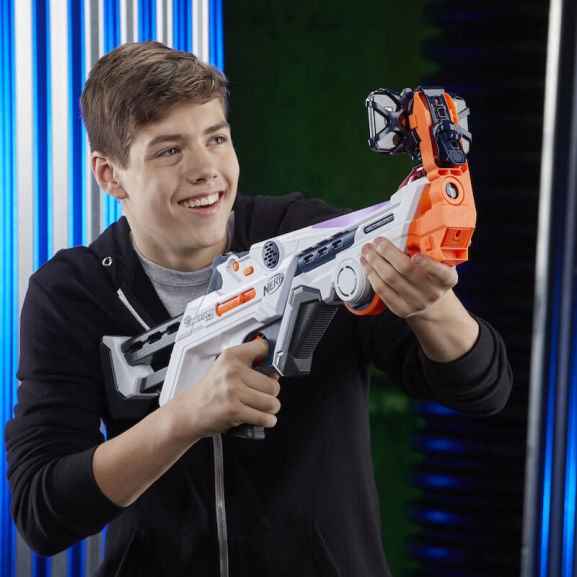 What Is Nerf's Zombie Strike Range of Products?

Launched in 2013, Zombie Strike features a collection of imaginative, colourful and powerful guns that can be used in all sorts of play scenarios. All of them are themed around the idea of fighting against a zombie invasion, a great backdrop for your Nerf war with friends. Here are some of our favourite products available from the series: 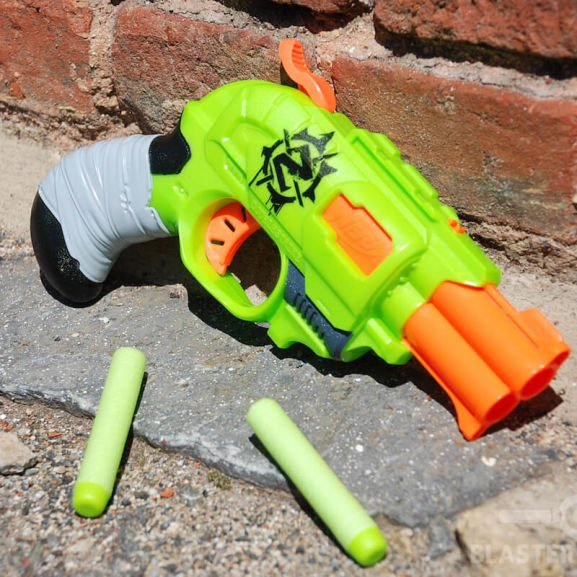 Fortnite has been THE game to play for a few years now, with its colourful, fun gameplay locking in gamers of all ages. Nerf has recently launched the FortniteXNerf series that lets you take your Fortnite gameplay into the real world.

Available is the ARL-L Nerf Elite Dart Blaser, equipped with motorised blasting for series shooting power. It even has a flip up sight, making it easier than ever to hit your target. The SP-L Pistol features a huge, detachable barrel that brings Fortnite’s tongue-in-cheek humour into real life combat. You can also get 3 miniature Toy Blasters, ideal for anybody looking to expand their Nerf collection without breaking the bank.

What Is Nerf’s Nitro Series?

Launched in 2017, the Nitro series is different from the usual Nerf fare. In this collection, everything revolves around different designs of foam car that are launched on tracks to perform spectacular stunts. The foam cars are launched out of specially-made nerf guns, which can be either set stably on the ground or fired from the air for super-cool stunts. Available are accessories like the Speedloop Stunt Set that has your foam car do a full 360-degree loop before it launches off a ramp for some serious air-time. The Nerf Nitro Bullseye Blast Stunt Set is another great addition for the Nitro set, giving you a target to aim your super-charged stunt cars at.

What About the Super Soaker Range?

Any Nerf Buyer’s Guide worth its salt can’t exclude the iconic Super Soaker. This famous range of pressurised water pistols was first created by Larami, but was later purchased by Hasbro, bringing it under the Nerf umbrella. In the 1990s, Super Soakers became a common sight in parks and streets around the UK, and they remain the most exciting, colourful and accessible high-powered water guns around. If you’re looking to buy a Super Soaker, look no further than one of these collections: 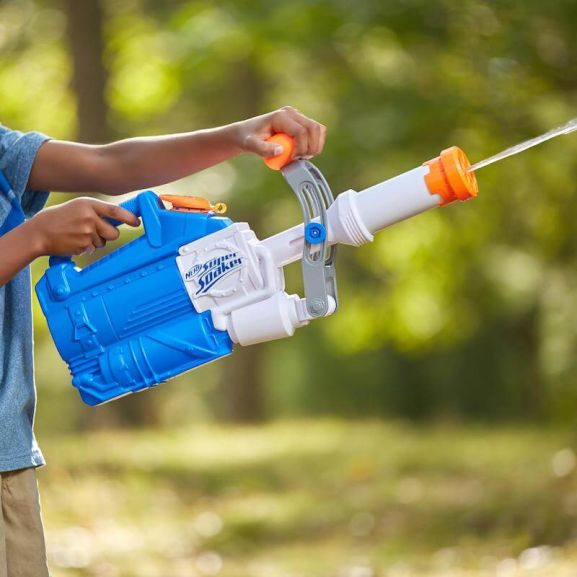 Are There any Nerf Games or Apps?

Nerf's website features a variety of browser-based games that feature the company's products, including a stunt game based around Nerf Nitro, where kids (and adults) can get a feel for how the cars and tracks work.

There's also the Nerf Test Range 360, where you can virtually test out a selection of Nerf's weapons. There's the Nerf Blaster Quiz, which helps fans to find the right blaster for their style and tastes. Finally, there's the Modulus app, which allows users to assemble Modulus guns online before making them a useful tool for budding engineers.

How and When to Buy A New Nerf Gun

Whether you're looking to equip your kids with the latest Super Soaker, or you just want a Zombie Strike cannon of your own, there's absolutely no need to purchase Nerf products at full price. Although their guns are generally pretty affordable, you can save even more money and get the right blend of accessories by shopping smart.

For starters, work out which Nerf guns you are interested in buying. Do you want a compact pistol style blaster, a crossbow or a hulking great cannon that fires almost 50 metres? Ultimately, they are all going to fire foam bullets. So, we would recommend only that die-hard Nerf fans dish out the money for an expensive model that has a bunch of features that have been designed with Nerf combat in mind.

Whenever you buy a new blaster, try to make a point of stocking up on ammunition as well. Nerf darts and discs inevitably get lost from time to time, and you don't want to be stuck without any ammo.

When you've narrowed down your choices, check out the hotukdeals Nerf listings, where you'll find all kinds of Nerf deals. Our listings include all of the top, British toy merchants. You’ll know exactly when Argos, Asda, Smyths, Amazon and Tesco are discounting Nerf products.

And, to get the very best deals, it might also make sense to shop at the right time of year. That’s because prices often drop on a seasonal basis. For example, you'd expect to find affordable Super Soakers in the colder times of years, when the demand for water pistols sinks dramatically. One time that you’ll find a bargain for any Nerf product is Black Friday, so keep your eyes peeled on the listings around mid-November if a Nerf gun is at the top of your child’s list for Christmas Day.

Whether you want to join the resistance against the zombie apocalypse, try out some fancy stunts with Nerf Nitro or soak your friends with a deluxe Super Soaker, there’s no reason to pay full price. Get the best deals on Nerf the hotukdeals listings.