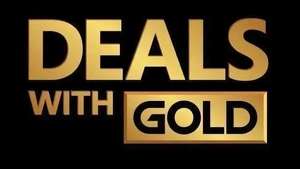 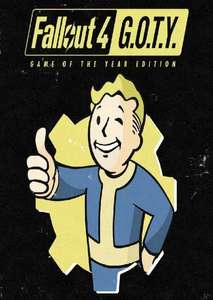 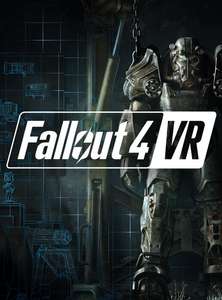 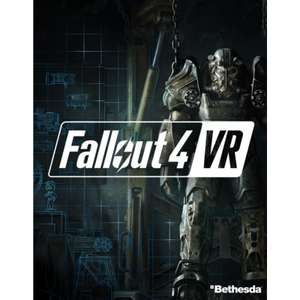 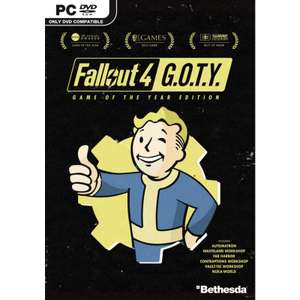 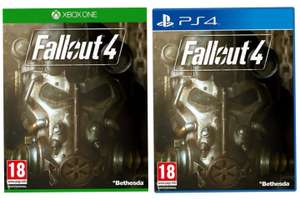 After spending 210 years in an underground bunker, the game’s protagonist emerges into a world ravaged by nuclear war in the year 2287. This will be a recognisable theme to anyone who’s played previous Fallout titles and the gameplay will also feel familiar to players of Fallout 3 and Fallout New Vegas in particular. This is a title with plenty of solid content, an excellent storyline with great characters, all topped off by a compelling original soundtrack.

Initially developed by Interplay entertainment, the Fallout series started with the first Fallout that was released in 1997. Fallout 2 (1998), Fallout 3 (2008) and Fallout New Vegas (2010) followed. Each title takes place in the USA, on a timeline that diverges from ours around 1945. Due to a dependence on nuclear power and a rejection of computer technology, the Fallout universe remains stuck in a 1950s cultural time warp.

Since 2008 Bethesda Games Studios has owned the right to produce all Fallout games. Although many elements of the game are reminiscent of past Fallout instalments, Fallout 4 uses a number of new technologies which enhance its overall look. One of these is the Creation Engine which enables players to choose the facial features of their character, male or female, in a freeform way. Designing a character is a popular way of personalising a game and this engine allows for a higher degree of customisation than slide bars ever could.

Fallout 4 is an action role-play game. It is available for three different platforms, the PS4, the Xbox One and the PC. Although the storyline is identical in each, the PC version offers more modifications – or mods – for players who like to alter their game playing experience. Graphics rendering might also be slightly better on the PC version, although this is entirely dependent upon the processing power of your computer. Unless you have a high end gaming PC it is unlikely you’ll notice any difference between the three platforms.

Other people will decide which option to go for based on the console they have, or the one they prefer to game on the most, be it the Xbox One or the PlayStation 4. Gamers are often divided over which console delivers a smoother performance and higher frame rate. For purchasers of a new console interested in playing Fallout 4, the Microsoft offer and Xbox One bundle that comes with a copy of both Fallout 4 and 3, that could be a smart choice. There have been a number of patches released for each version which either enhance gameplay or solve problems reported by players.

Available for the different platforms is a Pip-Boy Edition which contains the game and a wearable Pip-Boy device that can be connected to different smartphone models. The developers also released the Fallout 4 1.4 update on the 12th March 2016, which can be downloaded for free via Steam for PC users, or from the Xbox One or PlayStation 4 servers. This contains new features including extra quests and gameplay fixes. 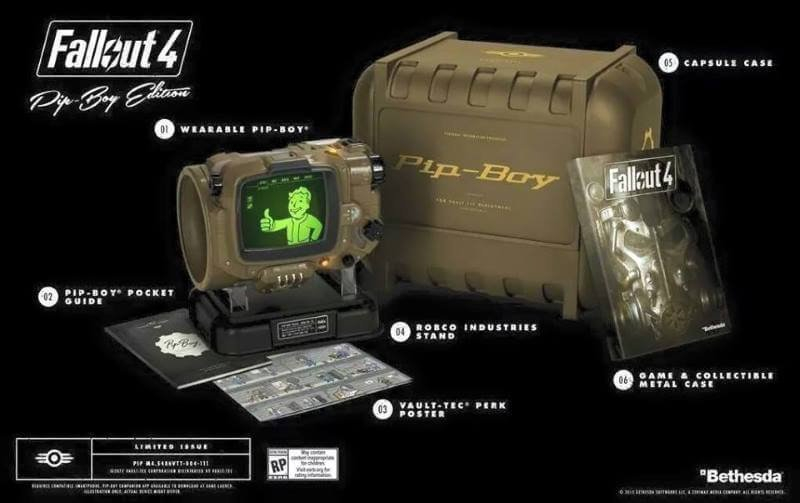 Fallout 4 has a number of expansion packs scheduled for release in 2016, the first is Automatron DLC. It involves a character called the Mechanist who creates a race of evil robots and sets them free in the Fallout 4 world. To beat the Mechanist players have to destroy his robots and collect their parts to build a rival robot. These robots will be highly customisable with a range of weaponry, limbs, abilities, colours, and even voices. The second expansion pack is the Wasteland Workshop, where players will be given the chance to build settlements and keep any animals they capture in a cage. The final release is Far Harbor; it is the most ambitious of all the packs and will be set on an island near Maine, with new quests, creatures and challenges.

The Fallout 4 gameplay is energetic and exciting, players are expected to think tactically and work with other characters to bring about the transformation of a devastated world. As it’s an open world title, like Metal Gear Solid 5 and The Witcher 3, people can play the game differently, but find both equal enjoyment and success with in it. There are numerous missions, quests and settlements and no on-rails style format to force the narrative along. The action takes place over a large, busy, and often dangerous area known as the Commonwealth. Players can concentrate on wiping out enemies and looting their possessions, but there’s a stronger focus on building friendships and creating settlements. Often it’s possible to avoid combat all together by charming your way out of a situation, but on tougher missions you can team up with other characters to get the job done. As the game progresses there are chances to add more advanced weapons, wear armour and craft gear that makes gameplay easier. This is fantastic for people who enjoy a sandbox format, but the sheer volume of options on offer can be baffling for players new to the open world experience.

Fans of first-person shooters won’t be disappointed by Fallout 4, with a wide array of weaponry on offer and unlimited enemies to fight. However, to make it through the wasteland of Boston, players need to be shrewd and cunning, as well as having a good aim. Equipment is improved section by section from scraps that are lying scattered across the map and, only by adding these, can players really see an improvement in their performance. Once the gameplay moves toward enhancing the settler communities, players also have to understand how to use their scrap to create everything, from generators, to shelters and water pumps. The level of detail involved is impressive and that’s where Fallout 4 departs from many other open world titles with similar objectives. 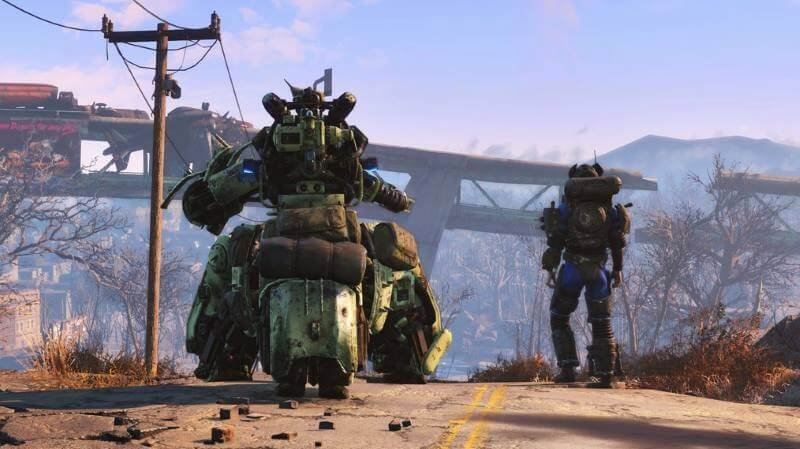 To access the game’s menu, players use the Pip-Boy, an entire command centre in gadget form which is wrapped around the character’s wrist. It stores data on maps, found items and statistics, but can also be used to play the game cartridges dotted around Boston. The VATS system is also back from past Fallout games; it’s an excellent way of enhancing combat sequences and can be used to watch the action unfold in super-slow motion.

Players boost the performance of their character in seven key areas using the SPECIAL system. As experience points are earned, they can be added onto the player’s statistics and used to increase their ability in a specific area. When the main storyline has been completed, players can return to Boston to continue with the game.

What Are the Minimum Requirements for Running Fallout 4?

For people who intend to play on a PC these are the minimum requirements:

Modding on Fallout 4 is in its early stages, although there are already many to choose from. The safest and most popular place to download Fallout 4 mods for a PC is Nexus Mods.

Also keep in mind that the complete game is not included on the game disc. For the download and installation of the game in its entirety an internet connection is required. 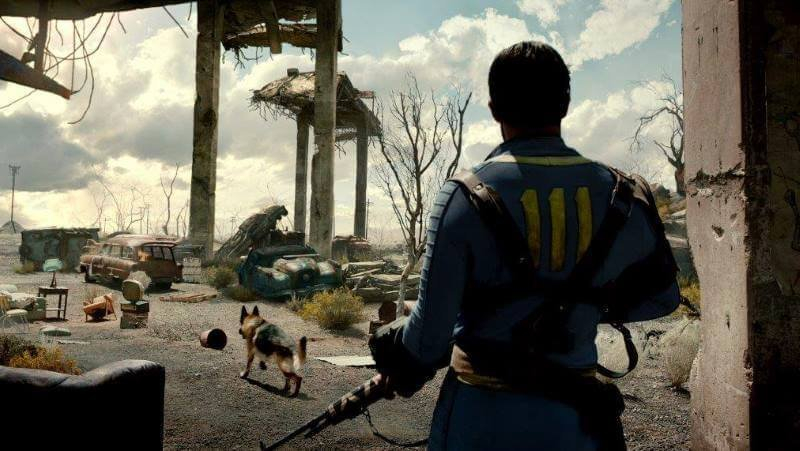 If you’re using Fallout 4 on a console, the game will take up between 28 and 35 GB of hard drive space. People playing on a console have to wait for official mods or mod tools to be released by the game developer Bethesda.

When it was released, Fallout 4 received numerous favourable reviews and high ratings from critics. Metacritic collated the data from 38 reviews and awarded the PC version of Fallout 4 an overall grade of 84 out of 100, the PS4 version was based on 58 reviews and got a grade of 87 out of 100, while the Xbox One version got 88 out of 100, based on 39 different reviews. Tech site, GamesSpot, gave Fallout 4 a 9 out of 10, with the reviewer, Peter Brown, calling the storyline “thought provoking”.

The game was awarded 9.5/10 at IGN with the reviewer, Dan Stapleton, arguing that even the game’s technical issues could not “slow down its momentum.“ Over at PC Gamer, Fallout 4 was dubbed: “a loving production” and praised by Phil Savage for its unique appearance and originality. It was awarded another score of 9.5 out of 10 by the online tech magazine, Polygon, which noted how the “great gameplay“ was a perfect match for the strange world Bethesda created. While PC Gamer gave it 88/100, praising the: “brilliant, massive sandbox of systems” and the way in which individual gamers can make their own story while playing.

What are the Pros and Cons of Fallout 4?

How to Find the Best Fallout 4 Deals

Fallout 4 is available to purchase from a number of retailers, these include Tesco Direct, Amazon, Steam and eBay.

With a little forward planning, it’s possible to save a significant amount of money on titles like Fallout 4. Traditionally, many retailers cut prices around Black Friday and older titles may also be also reduced in late autumn to attract Christmas shoppers. If you are hoping to buy Fallout 4 for the PC, it could be on offer at a bargain price during the Steam Summer Sale which usually begins in June.

If you’re looking for up to the minute news about specific products, hotukdeals has all the latest bargains from around the web. Visit the Fallout 4 page to find regularly updated offers and reductions on the game.