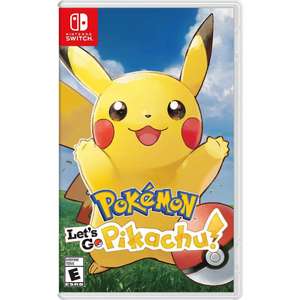 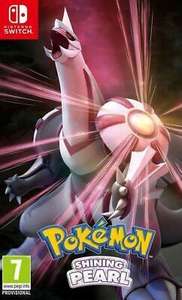 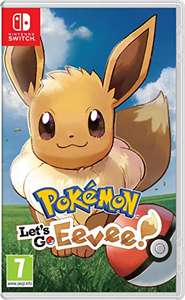 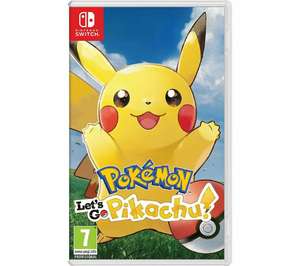 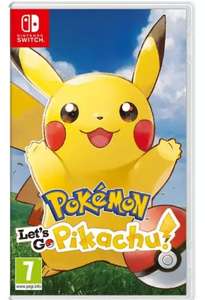 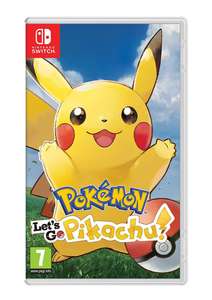 73° Expired
Posted 6th FebPosted 6th Feb
Pokemon Let's Go! Pikachu (Nintendo Switch) £29.99 at Simply Games£29.99Simply Games Deals
Are you ready to catch ‘em all in the Kanto region? Pokémon’s very first Nintendo Switch game has been announced and will be released in November 2018. Time to collect all your Poké balls a…

With a release date of 16 November 2018, Pokémon: Let's Go is the first Pokémon RPG adventure for the Nintendo Switch gaming system. Taking its cue from classic late 1990s Pokémon titles, Let's Go features a quest to become the greatest Pokémon catcher of all-time, all whilst fighting off enemies who want to use the little critters for evil purposes.

This buyer's guide will introduce the latest game, with its various new features and continuities with its ancestors. We'll suggest a few ways to buy Let's Go, as well as accessories and merchandise for fans to grab. But let's start with some background. 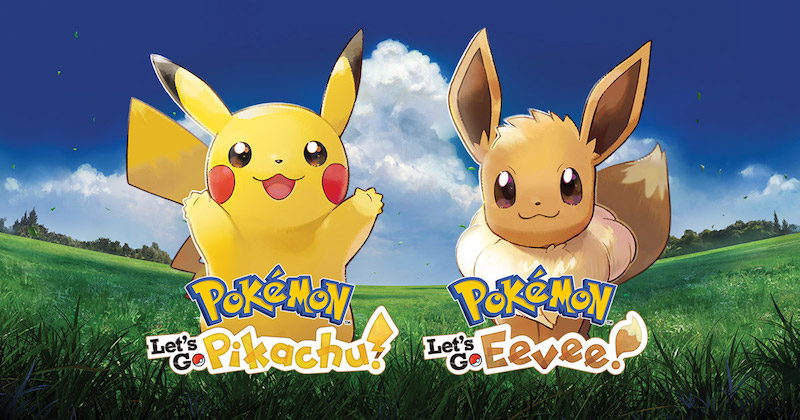 Catching up with the History of Pokemon Games

Pokemon probably needs little introduction. Since debuting on TV in 1995, this Japanese creation has captured the imagination of youngsters, and not-so-youngsters, across the world. There's something about the mixture of cute characters, relentless questing, and all-out fun that appeals across the board.

It was no surprise when Pokemon made the shift from cartoon classic to gaming franchise. In fact, the first title in the saga appeared as soon as 1996, when Pokemon Red and Green were launched for the Gameboy Colour.

These games introduced the now-familiar gaming mechanics. Players controlled an inexperienced Pokemon catcher in the Kanto Region, under the tutelage of Professor Oak. As they roamed around Kanto, they would encounter various Pokemon, catching and battling them to upgrade their powers.

As their skills increased, players ascended various “gym” levels, engaging in ever tougher challenges, until they could justly be called the best. It set the template for numerous Pokemon games, and still forms the basis for Let's Go, some 22 years later.

There have been some tweaks along the way. For instance, 2000's Pokemon Crystal introduced a female character, while Pokemon X and Y in 2013 included 3D graphics for the Nintendo 3DS. The most recent iteration of the Pokemon games for 3DS was Pokémon Ultra Sun and Ultra Moon, realised in 2017 and updating the previous games. Pokemon Go was another significant realise in the Pokemon game series. Realised in 2016, it was the first to be realised for iOS and Android mobile devices, and the game featured augmented reality where players could capture and battle Pokemon on their phone in their real-world location. But for such a long-running series, the actual core of Pokemon games has remained incredibly constant. It's still all about collecting Pokemon, training them, battling, and defeating evil foes. And it's still hugely popular.

What Does Pokémon: Let's Go Add to the Saga?

Pokémon: Let's Go is the first Pokémon title for the Switch console, and utilises both the next generation system's graphical power and dual screen setup. But at its heart, this game is actually a return to the very earliest Pokémon games.

Let's Go updates Pokémon Yellow, taking players back to the Kanto Region, where they must explore towns and forests, seeking out over 150 Pokémon for their own collection. However, there's one big addition to the action, aside from graphics. 2018's edition is fully compatible with Pokémon Go. So if you catch Pokémon in the real world via your smartphone, you can load them into Pokémon: Let's Go and train them up in the game.

The core gameplay of Pokemon: Let's Go will be familiar to almost all experienced Pokémon catchers, but there's a slight twist in the way these beasts are caught. This time around, players use Poké Balls to catch the animals, and there's a special controller called the Poké Ball Plus, which is optional but enhances the experience. This lets you throw balls, just like in Pokémon Go, although the Joy Con can be used as well. 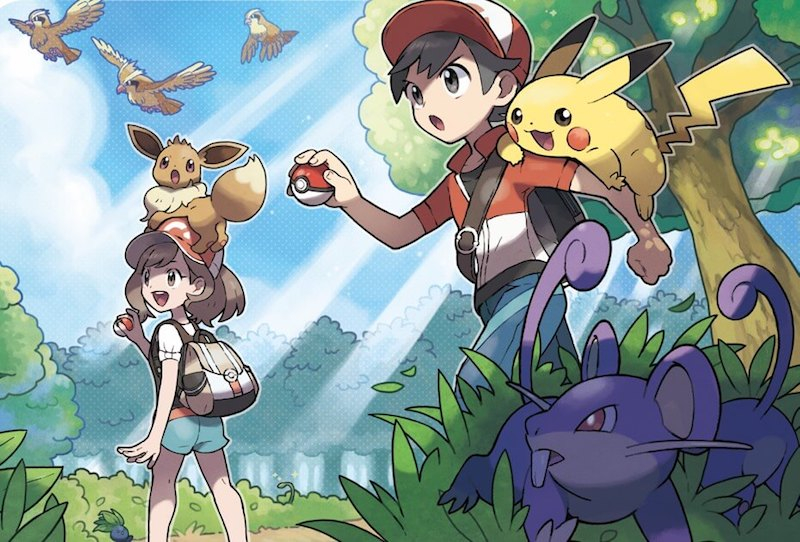 There are two different editions of the game, featuring a couple of familiar names as your lead Pokémon:

Whichever version you go for, the aim of the game is to wander the forests and towns of Kanto, seeking out Pokémon in the wild. In previous games, Pokémon have been concealed in bushes and other landscape features. But this time around, they are roaming free, and you won't miss them.

When you catch Pokémon, you can start to breed them into battling machines, building experience points as you go. XP points can also be accrued by using harder throws when capturing Pokémon, or gathering 'candies' from Professor Oak. So it's not all about winning fights.

As with other games in the franchise, players can also trade their Pokémon. This isn't as extensive as in previous titles, but it can still be an excellent way to build a collection. However, to trade you'll need to have a Switch Online subscription. We'll look at that in a bit more detail in the multiplayer section below. 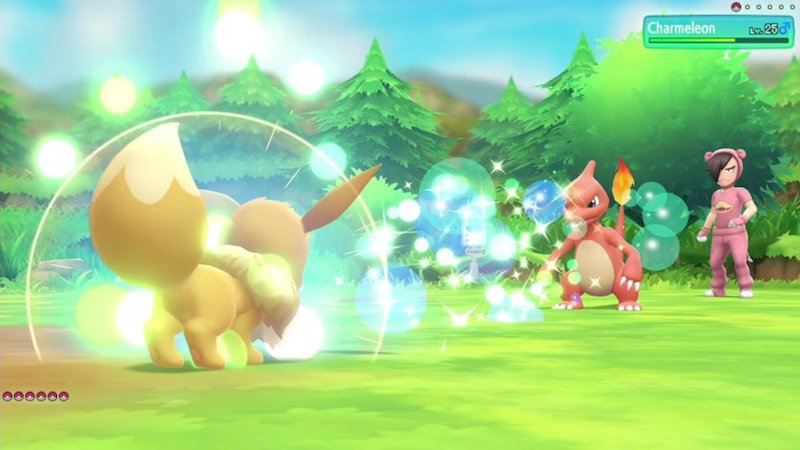 Pokémon games are usually well-made, and well-received, which is probably why the franchise is still going over 20 years after it began. Pokémon: Let's Go is no exception, with a Metacritic rating of more than 80% and plenty of complimentary reviews.

For example, Games Radar called the game a “beautiful recreation of Pokémon Yellow”, and were wowed at the graphics. The reviewer loved the variety of different gyms available in the game's various towns, and the ability to focus on specific Pokémon to catch, instead of repeatedly encountering more common varieties as you trawl through the fields of Kanto.

Trusted Reviews also loved the catching mechanics, as well as the personality of the partner Pokémon with whom players start the game. But they did point out some minor issues. For example, battles could become slightly repetitive, while the game itself is basically a slightly updated version of Pokémon Yellow, not a radical departure.

And what about the players? Well, a Metacritic rating of 6.1 shows that reception has been mixed. Many gamers have loved the graphics and chance to recreate the classic Pokémon experience. However, some criticise the game for being overly simple compared to previous titles, and removing features like natures and items. For these gamers, Pokémon: Let's Go is more suited to younger players, and Pokémon veterans might want to stay clear.

So be aware that this isn't the most complex RPG ever, and it's slightly less complex than other Pokémon games.

Most serious Pokémon fans will want to get hold of the game and the Poké Ball Plus Controller. This controller adds a totally new dimension to catching Pokémon in the wild, recreating the hands-on experience of playing Pokémon Go on your phone. Sure, you can play with the Joy Con, but with the Poké Ball Plus, everything feels more authentic, and you can gain extra experience points by mastering tricky underhand over overhand throws.

The controller attaches to the player's wrist via a fabric cord, and allows them to move around the in-game map, interact with characters, use gyms, and engage in Pokémon trading or training. So it's essentially a bespoke controller made especially for this game.

When you'd like to catch a Pokémon, just gesture with the Poké Ball in hand as if you are making a throw. If you get the direction and speed right, the ball lights up and you'll hear each Pokémon's characteristic cry, adding extra atmosphere to the game. It will also vibrate gently to let you know when you are near something interesting, and even contains a special Mew Pokémon, which has never featured in any of the franchise's games, and can only be caught by buying the controller.

Moreover, the Poké Ball Plus also synchronises with your smartphone and helps you get more from Pokémon Go. Instead of using your phone to check for Pokémon, you can hold the ball, which will signal any nearby Pokémon to catch. 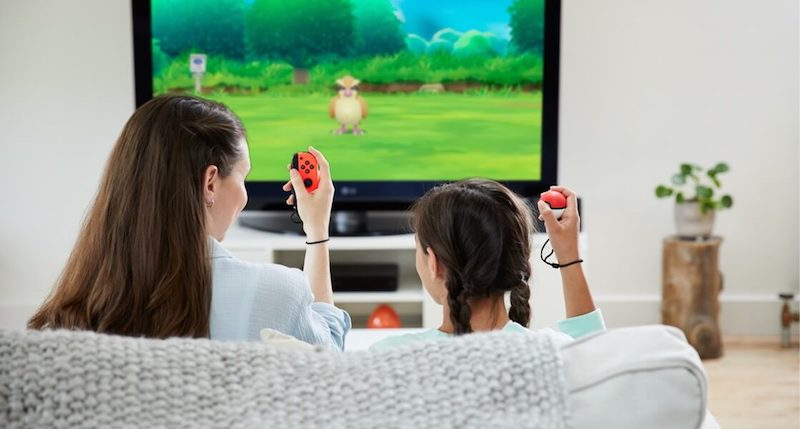 The ability to engage with other human players has long been a key part of the appeal of Pokémon titles, and Pokémon: Let's Go is no different. But the multiplayer features of the game are slightly different to previous games.

Firstly, there's a local two-player co-op mode for gamers to enjoy. This mode can be activated after a short period of play, when players have collected enough Pokémon to acquire a Pokédex. By shaking an additional Joy Con controller, the second player can then enter the game. Their avatar will be the opposite gender to the one chosen by the initial player.

With two players, battles are much easier, as both human players play on the same side, so completing the RPG should be much faster. But the second player is limited. They can't catch their own Pokémon or import Pokémon from other Nintendo accounts.

The other multiplayer element is Let's Go: Online. This doesn't require Switch Online, by the way, so you don't need to purchase a season pass to take part. As with the two-player co-op. Online multiplayer is slightly more basic than in previous titles. You can engage in trading and battles with other humans, but the ranking system has been done away with, so there's no real competitive element.

If you're already a fan of the game, or you're hunting for Pokémon: Let's Go themed gifts, Game Freak and its partners have plenty of merchandise to choose from. Here are some of the best places to look: 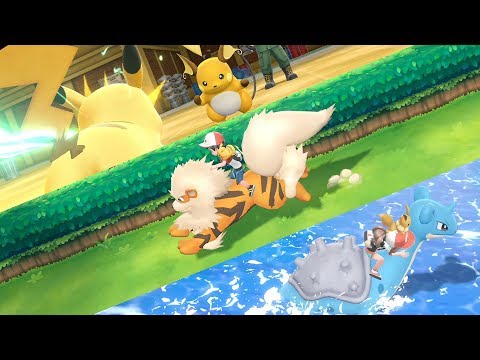 How and When to Buy Pokémon Let's Go!

Whether you're a long-time fan who has to “catch 'em all”, or you're new to the wonderful world of Pokémon, there are plenty of ways to save money when you purchase Let's Go.

For one thing, if you don't have a Switch yet, it might be worth buying a bundle with the game, the Poké Ball, and the console included. When you add everything together, it often comes to less than buying the three elements separately, especially when discount codes are available. But before you buy, take a second to check the hotukdeals listings.

Our listings feature downloads from leading UK gaming retailers, such as Smyths, Tesco, Very, CD Keys, GAME, and Base.com, not to mention the Nintendo Store. There's no better way to sort through current deals, and with major differences between retailers, that's always a good idea.

Be also sure to take advantage of seasonal promotions whenever possible. Games like Pokémon will be much cheaper around events like Black Friday sales, as well as the January Sales. And when these events arrive, you'll find every discount clearly listed and ready to redeem at hotukdeals.

Fill Your Pokédex for Less with the Discounts at hotukdeals

Pokémon: Let's Go brings one of gaming's greatest franchises to the Switch console. With gorgeous cartoon graphics, over 150 Pokémon to collect, and hours of training, catching, and battling to be enjoyed, it's sure to be a blast for fans and newbies alike. If you want to give it a try, check out the hotukdeals listings for the best Pokémon: Let Go offers and discounts.