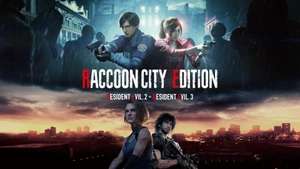 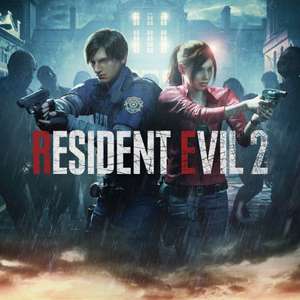 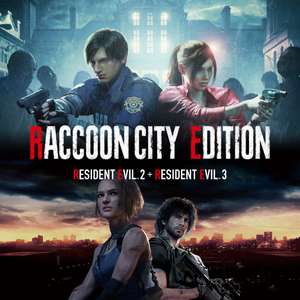 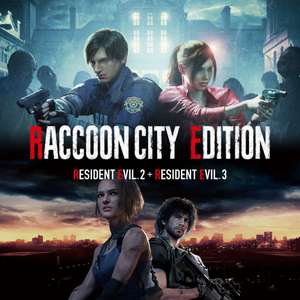 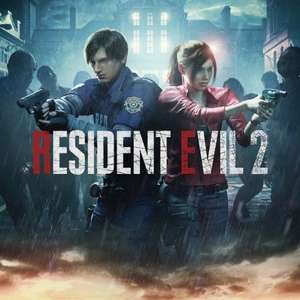 575°
Posted 10th SepPosted 10th Sep
[PS4/PS5] Resident Evil 2 Remake - £10.49 @ PlayStation Store£10.49Playstation Store Deals
If you already own the PS4™ version of this game, you can get the PS5™ digital version at no extra cost and you do not need to purchase this product. Originally released in 1998, Resident E… 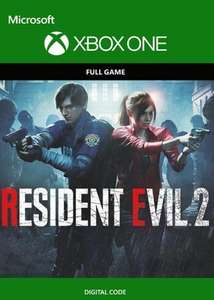 Resident Evil 2: A Brilliant Remake of the Legendary Original

Resident Evil 2 is set in Racoon City during a zombie outbreak. Gamers can choose to play as the student Claire Redfield or the police officer Leon S Kennedy. The third person shooter perspective creates an immersive atmosphere, similar to the style of Resident Evil 4. It was released in January 2019 and elaborates on many themes and events from the older game, as well as adding plenty of fresh twists. 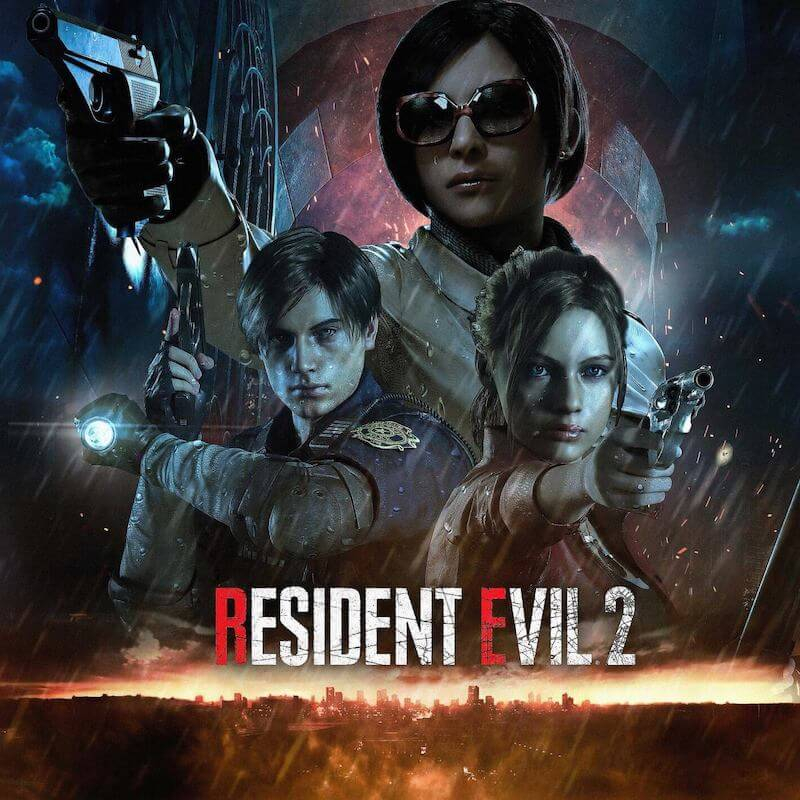 Created by game designers Tokuro Fujiwara and Shinji Mikami and known as ‘Biohazard’ in Japan, the Resident Evil franchise has been one of the most popular gaming series since it was first released in 1996. It has since been expanded to include novels, comics and a series of big-budget films. In each, the story arc relates to the mysterious Umbrella Corporation and the various undead creatures it is responsible for unleashing on the world.

The first Resident Evil 2 was launched in 1998 for the PlayStation and was hugely popular. Although the first Resident Evil game, released in 1996, was a success in its own right, it was the sequel which cemented the series as a gaming classic. Packed with gore and a carefully constructed storyline, the game was a frightening, disturbing experience that was unlike other horror titles.

A remake of Resident Evil 2 has been teased since 2002, but the refurbished version didn’t hit shelves until 2019, almost two decades later. The new Resident Evil 2 universe presents a series of fascinating secrets which have to be uncovered to move the action forward, all against set against a dark, claustrophobic atmosphere.

What To Expect From The Remade Resident Evil 2

Set just after the events of Resident Evil, the main gameplay of Resident Evil 2 revisits the narrative of the original version. Events unfold during September of 1998 when the prolific T-virus emerges onto the streets of Raccoon City from deep inside the corrupt Umbrella Corporation’s secret laboratory. As the majority of residents are transformed into violent monsters, a few survivors try to escape. The two protagonists are Claire Redfield, a student (whose brother was involved in the first game) and Leon Kennedy, a rookie cop. You can choose to play as either character, letting you experience two different plot lines (though there is a degree of crossover in both versions). As well as fighting off the zombie hordes, Claire and Leon need to explore their surroundings, solve a range of puzzles and find keys to unlock new rooms.

Most of the action revolves around fighting off enemies, but unlike past incarnations, the undead are less predictable and more determined. The camera angle has also altered to an over the shoulder, third-person view. It creates a perspective which allows you to see the action unfolding clearly and makes the attack sequences even more hair-raising. This view gives you more opportunity to learn the layout of a set, but there is also a map which can be used to pinpoint items that you saw but did not retrieve on the first pass.

It has been dubbed a remake, but the new Resident Evil 2 has had a major overhaul in terms of the visuals and gameplay. Players who enjoyed the 1998 version will recognise the Racoon City Police Station, the revolting sewers and Umbrella’s NEST Labs, but the attention to detail is stunning, from the animated torchlight to the lead character’s expressive faces and the blood thirsty undead.

Capcom have created a winner with their reimagined Resident Evil 2, managing to keep the foreboding atmosphere of the original whilst injecting plenty of next-gen innovation. The vastly improved graphics and game mechanics act to heighten the tension, providing a game that is faithful to the classic version but even more visceral. Plus, if you need a break from the customary narrative, the DLC offers brand new terrors. 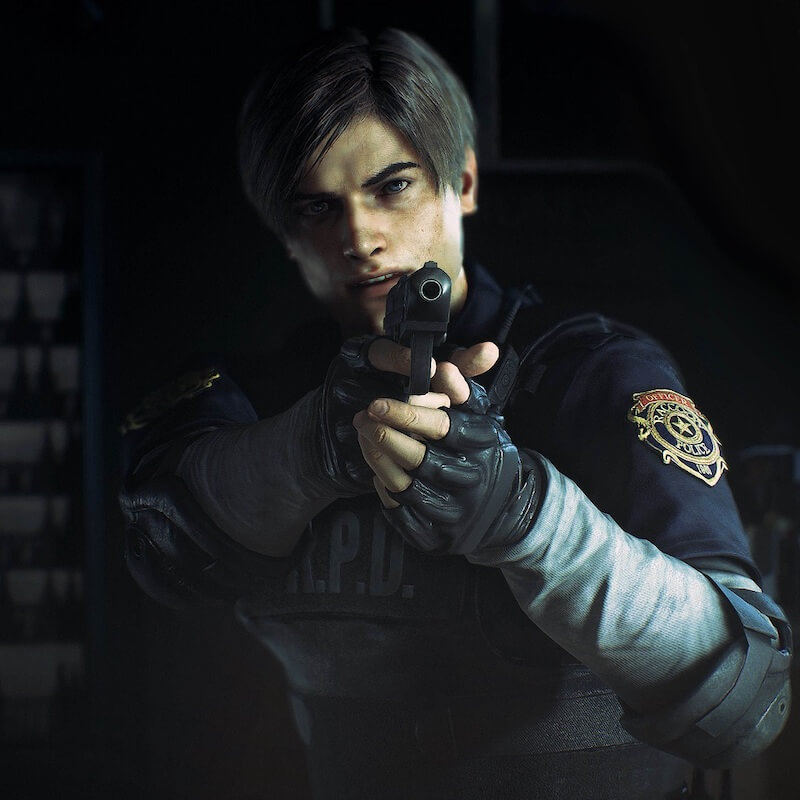 Capcom has created a free DLC adventure called Ghost Survivors to go with their remake. It focuses on the previously untold stories of three people attempting to leave Raccoon City during the hostile zombie invasion. The stories have different escape routes and plenty of unusual enemies, some of which only appear in this particular DLC world. Ghost Survivors is part of an update for the game, so your console or PC should download it automatically if it is connected to the internet.

This DLC follows the experiences of three characters. The first focuses on an anonymous soldier who worked for the Umbrella Corporation. The second tells the tale of Robert Kendo, a gun shop owner. The last story centres around the daughter of the city’s mayor, Katherine Warren. Each of these survivors has to face a range of enemies as they progress through the game. The action is very fast, taking just 10 minutes to finish assuming you aren’t killed. Of course, these mini-tales have been designed to be incredibly difficult, and it will take you far longer to survive and complete the character’s journey.

At the start of each scenario, you have the bare minimum supplies - just a couple of weapons and a small amount of ammunition, so you’ll have to use them carefully to progress through the initial stages. You can find the familiar Resident Evil herbs dotted around, but these come in three types and you can only take one. Plus, you can raid the rucksacks of dead enemies for more supplies. Aside from that, there is very little to plunder, so in this DLC you have to learn what to take and when, in order to make it through the entire level.

The game dynamic means that indiscriminate killing drains your resources, so you’ll often need a targeted strategy, picking out an individual to shoot, or sneaking past larger hoards. Ghost Survivors provides a break from the normal Resident Evil 2 gameplay and moves away from the source material to introduce new ideas. It’s challenging and non-stop, but there’s a definite sense of achievement when you eventually manage to figure out how to survive.

Capcom’s Resident Evil 2 reboot is available in three different versions, each with a different price tag and additional extras. If you aren’t sure which one would be best for you, we’ve made a short guide that explains the key differences between each edition: 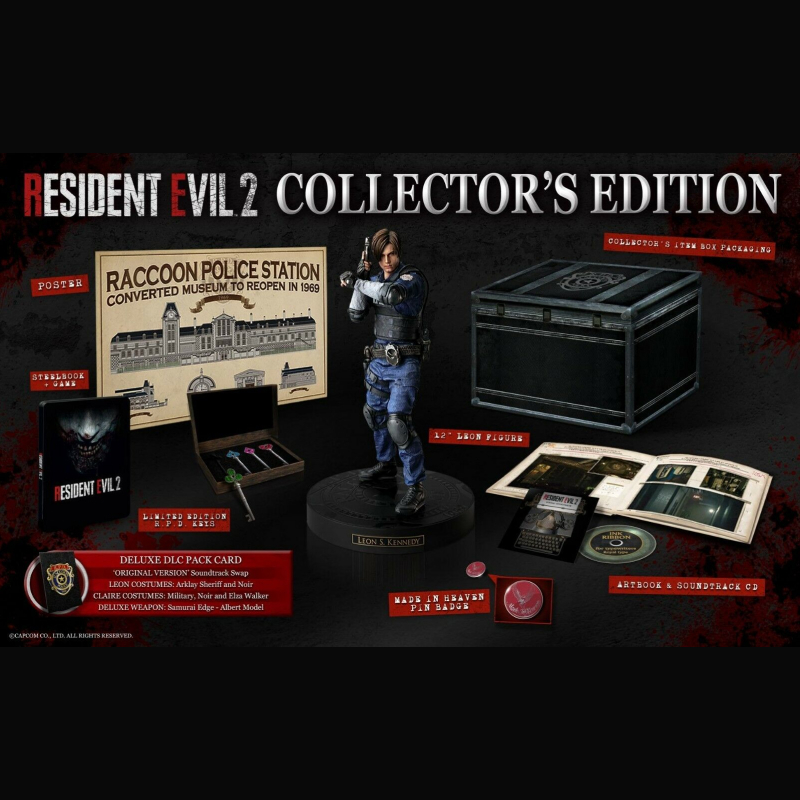 How Was the New Resident Evil 2 Received?

Resident Evil 2 has been received well by critics and gamers alike. In its first week of release, it sold a massive 3 million units. At Metacritic, it has amassed a score of 9 out of 10, based on over 1000 user ratings. It has also achieved 91/100 based on 80 reviews from critics. At TechRadar, Jordan Oloman described it as a ‘game oozing with passion and respect for the source material'. The Guardian's Keith Stuart said it showed ‘horror game design as true craft.’ It is a similar story at Trusted Reviews, where Jade King described Resident Evil 2 as a ‘survival triumph for Capcom’, awarding it 4.5 out of 5 stars. The main disappointments centre on wanting to see more of the city and more of the game as well, though the DLC goes a long way to remedying this issue.

What Could be Improved in Resident Evil 2?

This is an epic game that regularly changes gear, delivering an exhilarating blend of action, mystery and problem-solving. In the main, it is considered a success, but there are a couple of things which fans and critics were disappointed by. Here is a look at what the game does well, and where improvements could be made.

What The Game Gets Right

Where It Falls Short 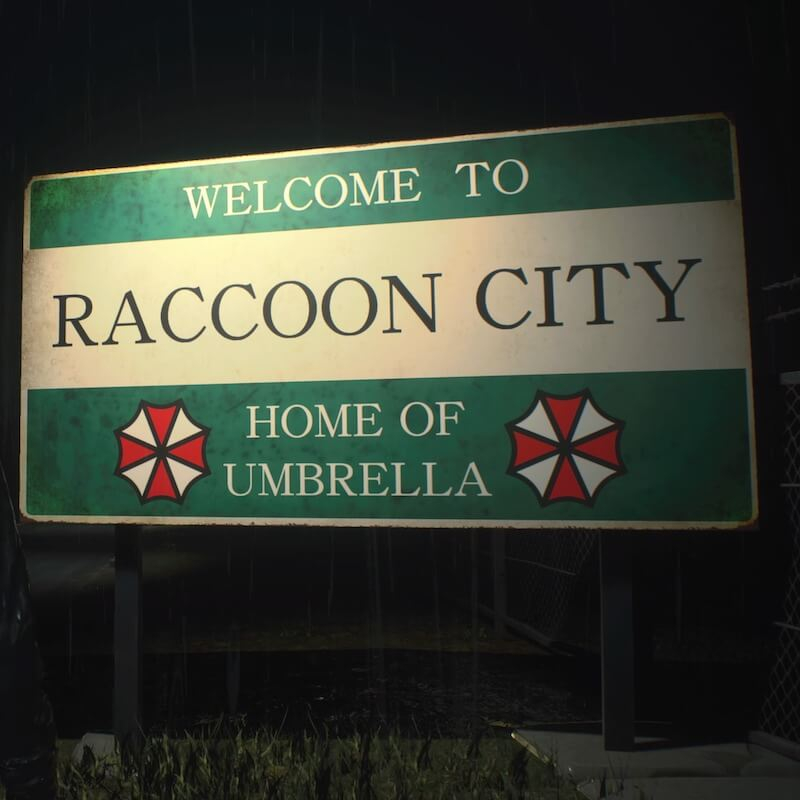 Is There a Resident Evil 2 Walkthrough?

Some aspects of the Resident Evil 2 storyline are especially difficult to navigate, and this can lead to players getting stranded in a particular place. Moreover, as the city is quite large newcomers may feel lost from time to time. The good news is that whether you are playing as Leon or Claire there are guides to get you through tough puzzles or complex areas. They can also help you find objects that are vital to the next stage of the game. For a little extra help, head to the Resident Evil 2 walkthroughs at Eurogamer, Polygon or IGN.

You’ll need either a PS4, Xbox One or PC to play the graphically-impressive game. To play on Xbox One you’ll need 21.07 GB of space on your hard drive, while PS4 users will need 24 GB available to play the game. As is always the case, requirements for PC players are a bit more complicated. Here are the game’s PC requirements in detail: 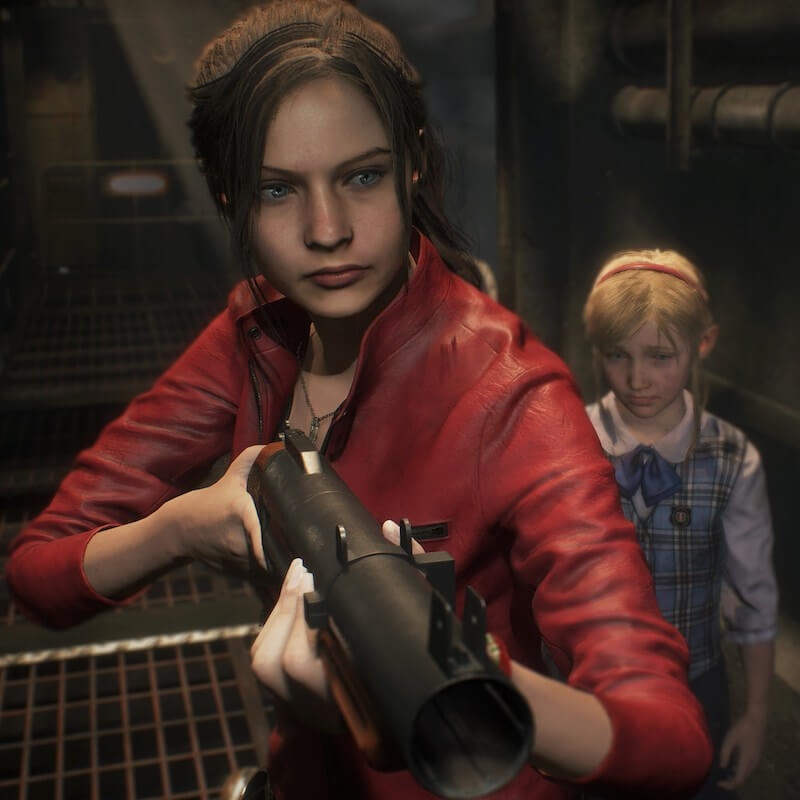 Where Can I Buy Resident Evil 2?

The standard edition of Resident Evil 2 for the PC, Xbox and PS4 is widely available to buy online from retailers like Argos, Asda and Smyths Toys. The Deluxe and Collector’s Editions can be found at speciality stores like Game, or at online retail outlets like eBay and Amazon. If you would prefer the digital download, you can visit Steam for the PC version, or the Xbox Store or the PS Store for their versions of the game.

When Is The Best Time To Buy Resident Evil 2?

During the Christmas, bank holiday and seasonal sales, many stores run discounts on their entertainment stock. Games can also be reduced by a significant amount as part of the Black Friday event, when most UK shops on the high street and online have major sales on games and merchandise. In general, games decrease in value as they get older because newer titles catch the public’s attention. Resident Evil 2 was released in January 2019, so you can expect to see more price cuts as it ages (although don’t expect significant reductions until the end of the year or next year).

You’ll find the latest offers and reductions on this game from top merchants at hotukdeals. So, to get the best price on this incredible title, the Resident Evil 2 listing on hotukdeals should be the first place you look.