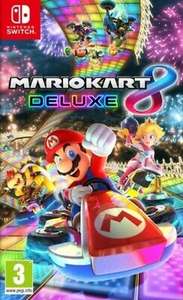 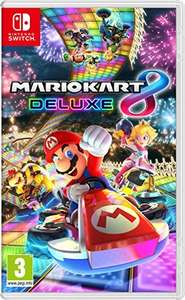 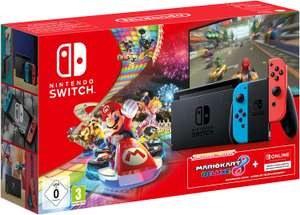 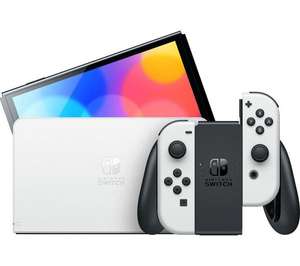 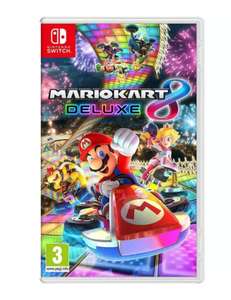 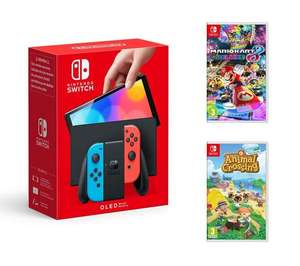 Released in April 2017 for the Nintendo Switch, Mario Kart 8 Deluxe is a fitting addition to one of the best-loved racing series ever made. Featuring all of your favourite characters from the Super Mario universe, and a few more besides, it offers family-friendly racing action, multiplayer thrills, and the kind of colourful, cartoony visuals Nintendo fans have come to adore.

This buyer's guide will introduce everything you need to know about the Switch's finest racer, along with a few buying tips for fans who want to accessorise their experience. So strap yourself in, and get ready for the race of a lifetime. 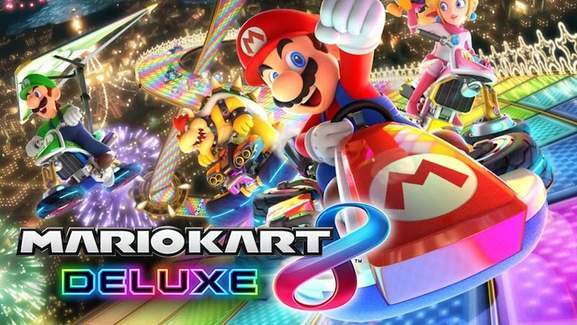 A Quick History of the Mario Kart: One of Gaming's Greatest Racers

Mario Kart has become a staple of the Nintendo collection, seeing new versions for pretty much every console the Japanese giants have produced. And when you play the original version (released for the SNES in 1992), it's easy to see why.

The first Mario Kart title introduced almost all of the elements that still make these games a joy to play. The cartoon graphics, famous personalities, easy to race and creatively designed circuits, and simple dynamics made Mario Kart an instant hit, and spawned a whole genre of karting titles.

Not much changed with the gameplay basics during those 20 years, although there have been a few innovations. For instance, Mario Kart 8 introduced “anti-gravity” segments where karts could flip onto the ceiling, while Mario Kart 7 introduced “hang-gliding” elements to enhance certain vehicles. But the developers have obviously stuck to the maxim that “if it ain't broke, don't fix it”, because the latest Mario Kart title is a direct descendant of the SNES version, and as far as sheer enjoyment goes, that's a very good thing. 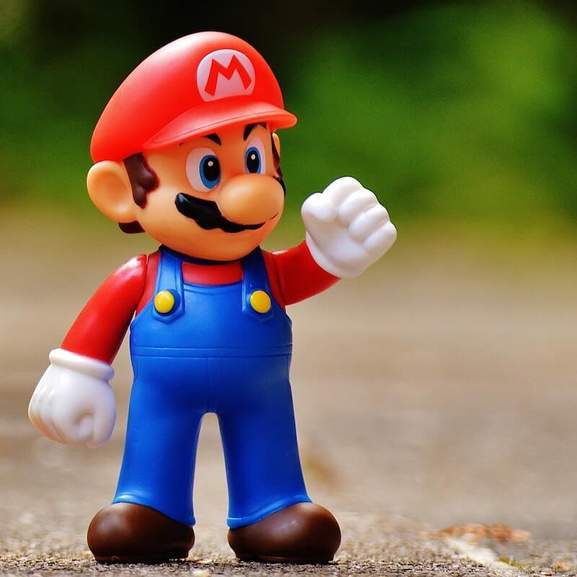 Having said that, fans of previous Mario Kart titles will certainly notice a few changes. This is obviously most obvious in the visual department. The Switch is more powerful than any previous Nintendo console, allowing the developers to pack in more action and immerse the player even more deeply in each race.

Compared to Mario Kart 8, the frame rate has been increased considerably, to 60fps at 1080p, fitting the Switch's graphical power relative to the Wii U. There are more circuits to race as well, while older features such as "Boos" and "Feathers" have been reinstated due to popular demand. As we'll see, the character roster has been increased to include some familiar faces, there are new suits to unlock, and everything just feels more complete than the 2014 title.

And Nintendo have also revisited the basic controls, bringing in a novice setting to ease newbies into the action. Thanks to Smart Steering, anyone can take control and win races, before graduating to grown-up modes.

For those who haven't played Mario Kart 8, the action is pretty simple. Basically, players take control of personalities from the Mario universe, racing them around circuits in championship and battle modes.

As races proceed, players can enhance their vehicles with pick-ups, including speed boosts and weapons, and vehicles can be converted into hang-gliders, motorbikes or submarines for certain circuits. 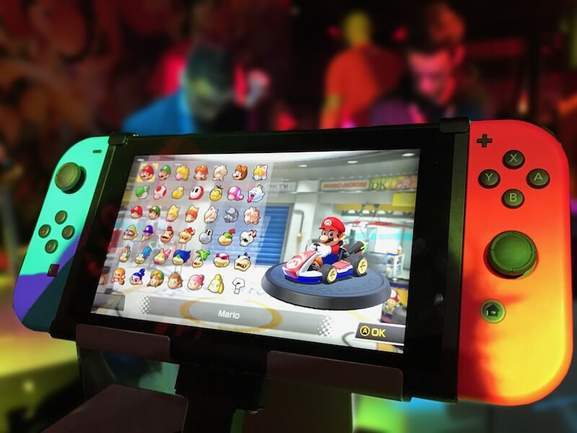 One of the major limitations of Mario Kart 8 was being able to only one item at a time. Mario Kart 8 has addressed this and players now have the ability to have two items at a time! Throughout the race, players can either pick up two separate single item boxes individually or pick up a new double item box! In these boxes, there are a range of items, including:

In addition to those pick-ups, Mario Kart 8 Deluxe also revolves around currency. To succeed, racers will need to accumulate coins while they race, which can be used to enhance your kart and buy power-ups. They allow you to upgrade your kart body to more powerful varieties, and also have an effect during races, boosting your speed appreciably the more you collect. 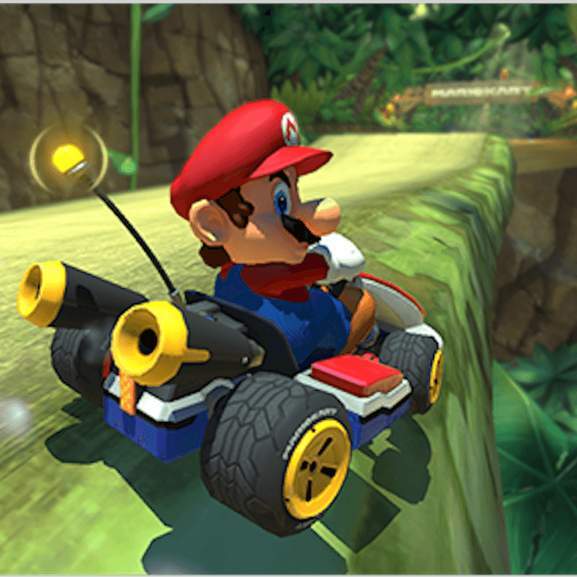 One of the most enjoyable aspects of any Mario Kart title is being able to play as personalities from Nintendo's gaming universe, and that's certainly the case with Mario Kart 8 Deluxe. Here are some of the superstars available to race as, and against:

Each of these racers has subtly different statistics, which you can check out as this Mario Kart 8 Deluxe wiki. It's also a good source of beginners tips, which should help you get to grips with the powerups, courses, and ways to improve your lap times. 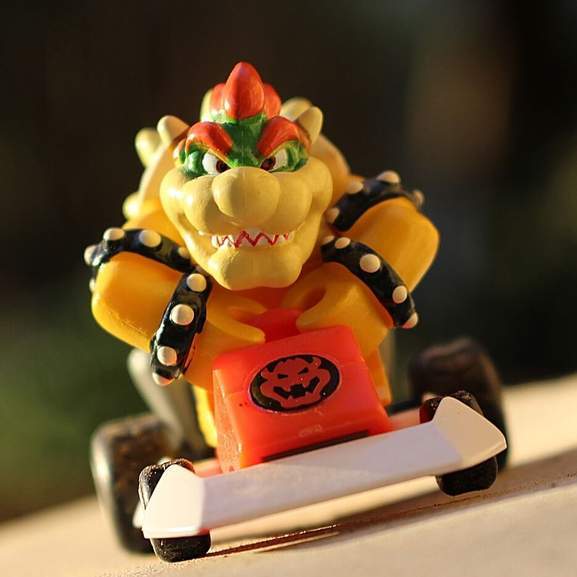 Along with different racers, powerups and vehicles, the final element in Super Mario Kart 8 Deluxe are its modes. This time around, the options are as follows:

Before moving on, we have to mention the vast variety of courses available with Mario Kart 8 Deluxe. There are 48 in total, enough to keep players going for months until they work out the intricacies of each circuit.

The sheer number of courses is matched by their diversity and the attention to detail, which clearly went into designing them. For instance, courses vary from Yoshi Valley and the Royal Raceway (which should be familiar to all N64 racers), to Rainbow Road, the Zelda-inspired Wild Woods, F-Zero's Mute City, and Bowser's Castle.

When they play through the various circuits, Nintendo fans will be delighted by the scenery, with nods to Zelda's Hyrule and almost all of the Mario series' iconic locations. And if you aren't too worried about video gaming heritage, they all play pretty well, too.

How Do Amiibo's Work In Mario Kart 8 Deluxe?

As with almost all current Nintendo titles, you can enhance the Mario Kart 8 Deluxe experience via Amiibos, the little figurines that Nintendo sell, and which interface with Switch or Wii U consoles.

In the case of Mario Kart 8 Deluxe, Amiibos allow you to unlock Mii suits that dramatically extend the personalities available to play. For example, you can unlock Mega Man, Sonic, or Samus from Metroid.

Most Amiibos should be catered for, but if you aren't sure, you can find a full list here. 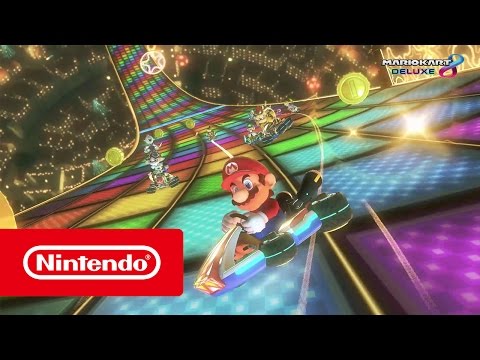 No Mario Kart titles have been a flop with critics, and Mario Kart 8 Deluxe didn't buck the trend. To take a representative review, IGN gave the title 9.3 out of 10 and praised the extended courses set, a wider range of character options, as well as additions like “smart steering” to help beginners learn the rules of the road.

The Guardian awarded the title a full 5/5, calling it “an absolutely fantastic racing” experience. As with other reviewers, their expert liked the way the Wii U's DLC packs had been incorporated into the Switch title, as well as tweaks to the action such as anti-gravity. They were also enthused by new racers like the cast of Splatoon, a neat cross reference from another excellent Switch title.

Overall, the verdict was extremely positive, as a Metacritic rating of 92 suggests. Unlike some titles, the player ratings for Mario Kart 8 Deluxe almost matched the critics, with very few unfavourable responses. So there's no room to doubt, this is a serious videogame with plenty of appeal.

If you want to add Mario Kart 8 Deluxe to your Switch collection, you have a few ways to do so:

How Does Multiplayer Work in Mario Kart 8 Deluxe?

If you want to play locally with friends, Mario Kart 8 Deluxe is the ideal title. Up to four players can gather around a Switch with their Joycons to take part in Battle or race modes. Alternatively, you can link together Switch consoles, allowing as many as eight players to join the action.

And it doesn't end there. Multiple Switches can also be built into Local Area Networks, with as many as 12 consoles. You don't need to be in the same room to do this. All you need is a Switch console, a LAN adapter, and the Mario Kart title downloaded onto your system. That way, you can pack 12 friends onto Battle Arenas.

Then there is online play. With a Nintendo Online subscription, local players can join 10 other human racers in 4 race cups or battles.

As with the original Mario Kart 8, the Deluxe version has been augmented by additional content. Nintendo released a DLC Pack in July 2018 based around Zelda: Breath of the Wild, adding Hyrule-themed courses and vehicles, as well as Zelda-inspired racing personalities. So, if you've ever wanted to face up as Link against Luigi and Mario, now's your chance to do so.

When you purchase Mario Kart 8 Deluxe, why not enhance the experience by adding some Switch accessories? There are a number of options to go for and you may save money by bundling them together with the Mario Kart purchase. 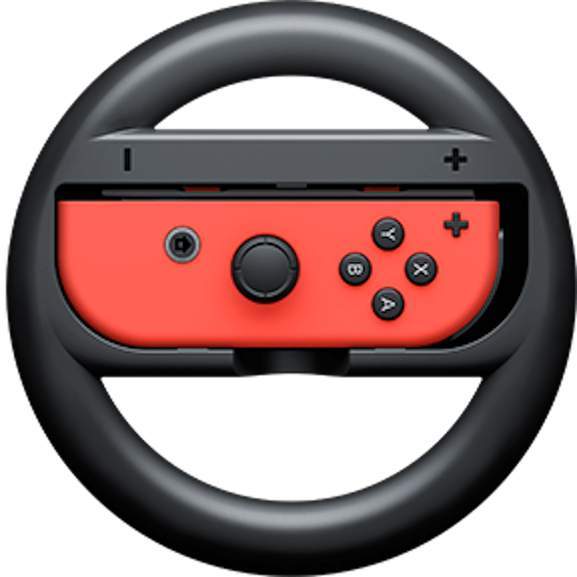 How and When to Purchase Mario Kart 8 Deluxe

You're almost on the starting grid, ready to leave Koopa and Donkey Kong in the dust. But how can you make a Mario Kart 8 Deluxe purchase without spending over the odds? And, if you don't have a Switch, how can you get hold of its finest racing title and the console itself for the cheapest price?

The best way to find a Mario Kart bargain is to shop at the Mario Kart 8 Deluxe hotukdeals listings. We feature the latest deals from major UK merchants like Asda, Tesco, Argos, Amazon, Very, ShopTo, CeX, and, of course, the Nintendo store.

If you don't own a Switch, make sure you check for bundles featuring Mario Kart. But before you buy, compare their prices with the cost of a basic Switch console, or a Zelda or Smash Bros box. You may find that buying separately saves cash, especially if you find an unbeatable deal for the Mario Kart download.

And remember, you'll probably want to order a subscription to Nintendo Online, which opens up online multiplayer play. The best way to do this is by partnering a Mario Kart purchase and a 3 month or 1-year subscription. However, again there may be standalone deals from time to time which make it more cost effective to segment your purchases.

Finally, look out for seasonal deals. Black Friday and Cyber Monday in November are great times to shop for Nintendo products, as are the January Sales, and Amazon Prime in mid-summer should deliver savings as well. In any case, keep your eye on the hotukdeals listings, and you're sure to find a great Mario Kart deal.

Adding more tracks, character options, weapons, and game modes than ever before, Mario Kart 8 Deluxe is the ultimate karting experience. Race or battle your way through Hyrule, the Rainbow Road, and plenty of other iconic environments, and smash your friends in one-on-one races. Either way, the finest racing title on the Switch can be purchased for less at the hotukdeals Mario Kart 8 Deluxe listings.