All Radio Discounts, Offers and Sale - May 2022 58°
Posted 15th MayPosted 15th May
Einhell 3408015 TE-CR 18 Li Solo Power X-Change Cordless Radio - Supplied without Battery and Charger - £28.91 @ Amazon£28.91£4941% offAmazon Deals
The cordless radio TE-CR 18 Li - Solo is the practical and robust workshop radio. With its replaceable system battery, this device can be operated with the same 18 V batteries as used for al…

These look and feel cheap &amp; nasty &amp; as already been mentioned have no modern features. Given the size I doubt the output is great either. I'd rather spend money on a portable Bluetooth speaker with decent battery life &amp; link my phone unless I was desperate for a non-DAB radio.

No DAB or Bluetooth, quite expensive for what it is still but at least it’s at a reasonably sensible price now. 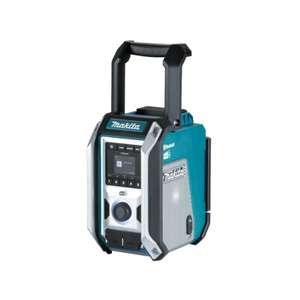 72° Expired
Posted 13th MayPosted 13th May
Makita DMR115 Multi-Volt CXT/LXT AC DAB Plus Bluetooth Jobsite Radio Naked - £123.24 with code @ PowerToolMate / Ebay£123.24£139.9912% off Free P&P FreeeBay Deals
Get deal*Get deal*
Makita DMR115 DAB and Bluetooth Radio, use code SHOP15. At retail price the item is slightly more expensive on Ebay from this seller than at the sellers own website but with the Ebay code th…

Also been told reception on this style of radio is not great either. Still a good price though so hot for me

These are brilliant, great sound, perfect bass. Love mine and i paid 180 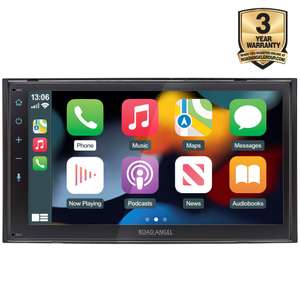 I’ve fitted one of these in a corsa before. You just need a double din facia and removal keys assuming it comes with the cage and the iso wiring loom for the new stereo should take about 2 hours max 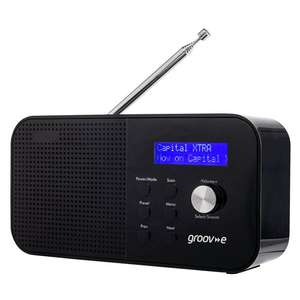 Anyone looking for a cheap DAB+ radio, Asda do one for £15.

Lol it's a twenty quid radio.

Agree, no dab+, is a poor show for a dab radio nowadays. You can get a portable dab radio for the same price at Asda, that is dab+. I bought one and its pretty good. Cold for this deal. 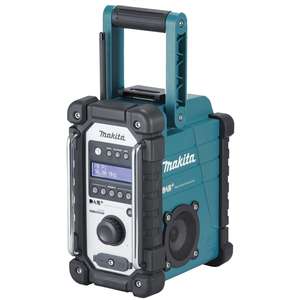 Ah, is it sealed in? On most tools the battery is exposed. Ah it fits in the back Source: https://www.powertoolworld.co.uk/makita-dmr110-18v-lxt-12v-max-cxt-dab-digital-job-site-radio

I guess, just be mindful about the size of the battery compartment you can hide these within - if it’s a big adapter - might struggle?

Is there an aftermarket battery you can use with these?

I had the pleasure of listening to this for 4 months whilst my builder did our extension. I agree, it's bassy, but the reception is terrible. Only got reception in really specific places. It really needs a better antenna. 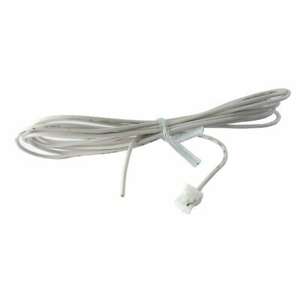 Very niche deal. In fairness, I'd make my own - it's a strip of single core cable.

The Radio - Keeping us in Touch with the World

Way back in 1864 James Clerk Maxwell proved that electromagnetic waves could exist in free space and radio technology was born. In simple terms, radios allow information to be transmitted through space by modulating the volume, frequency and pulse of these electromagnetic waves to create the sounds we hear when we switch on our radio. When a radio receiver, whether digital or analogue, is turned on and tuned in it selects the wave bands allocated to different channels giving us instant access to a world of entertainment.

A Brief Look at the Development of the Radio

Like all new developments the road to a radio in every home went in stops and starts and taking in all the physics and mathematics involved is only for the most dedicated of historians. But a very simple timeline runs something like this: 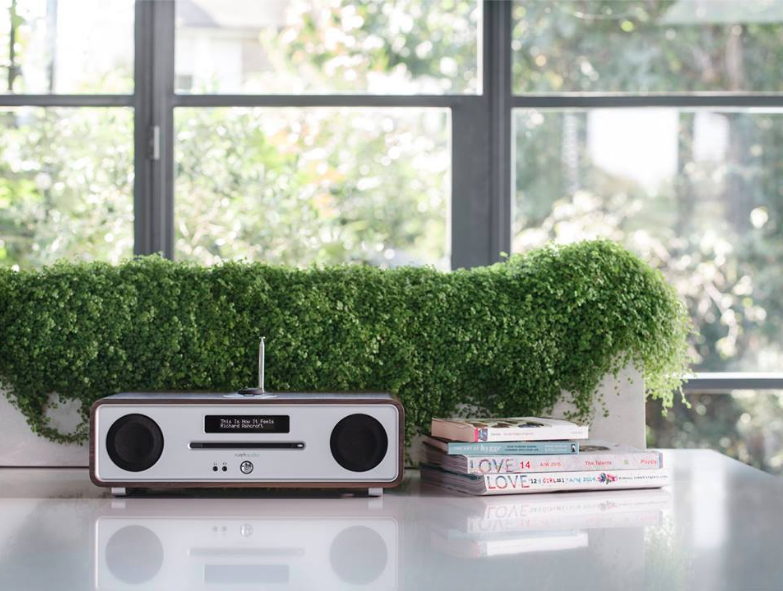 FM Radio - Original commercial radios used AM or medium wave frequency but this was subject to interference and the waves became very crowded as listening to the radio became increasingly popular. FM or frequency modulation radio was patented in 1933 by Edwin Armstrong and first used in the United States on pioneer music stations. Because of its better sound quality FM was used for most music broadcasts. FM radio stations use VHF frequencies with each country having its own frequency band while individual radio stations are allocated a band within that. Initially, FM broadcasting was used to transmit high-quality orchestral background music in stores and offices or classical music to an elite audience of urban listeners. In the late 1960s, however, FM radio was adopted by fans of alternative rock music and by the early 1990s AM Radio had been largely abandoned. The growth of FM Radio also saw the growth of pirate radio stations, such as the iconic Radio Caroline which broadcasted under the nose of the authorities from a succession of ships anchored in international waters. The smaller size of transmitters and the lower cost of the equipment needed for FM broadcasting is what made this exciting period of radio history possible.

Digital Radio - Is the use of digital technology to transmit across the radio spectrum. By digitising and compressing analogue signals the number of radio channels can be increased along with an improvement in audio quality. The problem of channels fading out or being lost when on the move was removed with the introduction of digital radio.

Digital Audio Broadcasting - In 2012 four digital wireless radio systems were recognised by the International Telecommunication Union. One of these was the European system of DAB or Digital Audio Broadcasting. DAB systems can provide both terrestrial and satellite services and are typically designed for handheld mobile devices. Despite its many potential benefits, the introduction of DAB was slower than it could have been due to a lack of global agreement on standards. DAB receivers hit the market in 1999 and within six years 500 million people were within a coverage area and around 1,000 DAB stations could be received. Despite this, sales of DAB radios only really took off in the United Kingdom and Denmark. In today's market though DAB radios are going from strength to strength.

The Advantages of Choosing a DAB Radio

If you are considering buying a new radio or update an existing model you shouldn't really consider any type other than a DAB receiver. This is because:

If your DAB radio also has internet connectivity or Bluetooth it can be connected to a Wi-Fi enabled computer or your smartphone letting you play your favourite music or connect to your favourite radio station from just about anywhere in the world.

Are There any Disadvantages to Choosing a DAB Radio? The popularity of DAB radios for their ease of use and quality of sound is growing year on year but there are one or two things you should be aware of before choosing one.

That's the Technology Sorted out But Why Buy a Radio?

To many people their radio is an important link to the outside world, a relaxing alternative to TV and books or, in many cases, a companion to day to day living. Many of us wouldn't get through the day without listening to our favourite radio show or DJ or getting a shot of the latest music releases. But why is radio so popular?

Despite the growth of other communication devices the popularity of radio has never been higher with surveys showing that 1 out of 9 people tune in to the radio every week. If you want more details check out the statistics at Rajar.

Buying a new radio needn't break the bank with so many manufacturers and models to choose from and the good news is that even the top of the range models shouldn't set you back more than £100. With most DAB radios having all the features we highlighted above and more the main thing to consider now is what you want your radio to look like and how it will complement your home decor. Do you want something totally sleek and modern for the contemporary home or do you like a touch of retro?

More expensive models from brands like Ruark Audio can be cased in the beautiful grain of natural wood while at the other end of the spectrum cheap and cheerful radios from the online and high-street name Argos come in a huge range of shapes and bright colours. If you love the look, lines and colours of post-war radios then you'll be joining the fans of retro radio design. These combine all the benefits of the latest technology with a fun look from previous years. A good source of retro radios is Past Time Radio. A quick online search shows you that many online and high-street merchants have all the radios you could want to choose from. Try Currys PC World, John Lewis, Sony outlets and all of the big supermarkets like Tesco or Asda. If you find the choice bewildering then HotUKDeals brings all of them together, giving you specs and reviews that make choosing a new radio easy.

Whether you've chosen a tiny portable model or a radio design that complements your furniture and decor retailers also have accessories available to enhance your radio listening experience. Accessories to choose from include: Carrying cases or wrist straps, belt clips or armbands, headphones or earbuds, battery chargers or antennae.

When is the Best Time to Buy a New Radio?

Canny shoppers know that prices vary throughout the year and will wait to get the best price on something they really want. So, when is the best time to grab a radio bargain?

January Sales is the time to snap up left-over Christmas stock from the shelves or look out for good as new deals on unwanted Christmas gifts or a radio that's been replaced. A great place to find these deals are on second-hand sites like eBay. And, of course, there are also the traditional January Sales. Mid-price range electronics are often discounted in February to make space for newer stock coming on to the market. Although sale seasons are not as clearly defined as they used to be, many retailers still stick to the tradition of the August sale.

Furthermore, UK retailers have taken to heart the American tradition of Black Friday and Cyber Monday at the end of November and the beginning of December. Good promotional prices will be available on radios both online and on the high street.

HotUKDeals is a community for bargain hunters where our radio pages bring together the best prices, vouchers and promotional codes from both the web and high street, making the search for your new radio easy.