All adidas Discounts, Offers and Sale - May 2022 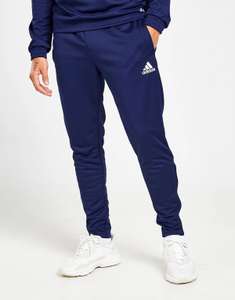 Having the same issue Almond…

My 4mnth old is called Mohammed Salahudeen so this shud be sooo cute on him!

Sold out for me 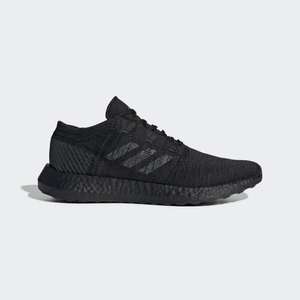 Ah my nephew sent me a code via his Uni student app, it’s a 35% off code for normal priced items or 20% off sale items

how do you get the code for 20% off discounted items please?

I didn’t really read it properly lol so used the 30% off code, but that only gives you 20% on discounted items so worked out £48 for me…but as main sizes have virtually sold out couldn’t be bothered to cancel and reorder. Bargain either way

I find that these particular shoes are not very comfortable especially when compared to the (more pricey) ultraboost. Perhaps I should curb my expectations but still something to think about.

vouchercodes block you if you are in ukraine, they should be boycotted 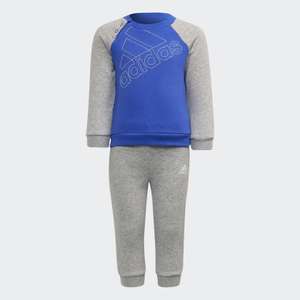 89°
Posted 23rd MayPosted 23rd May
adidas Essentials Logo Sweatshirt and Pants for Kids (Gender Neutral) £11.22 delivered for members @ adidas£11.22£27.5259% off Free P&P FreeAdidas Deals
I think this is one is a nice offer. Available Sizes (bit low on 0-3M): Steps to get to this price: Get your 15% off voucher here have a Creators Club account on adidas (free…

Is gender neutral the same as unisex (confused)

Nop, it's Gender Neutral according to adidas in 2022 (embarrassed)

It's blue so it's for a boy lol 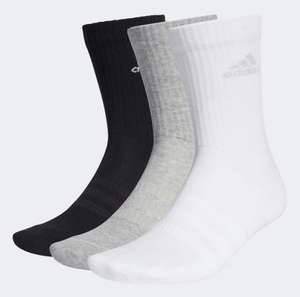 Worked for me, delivery on thur

Thanks chief! I think I remember seeing that now, but the anecdotal comments about some being unable to use it and waiting for months for refunds put me off.

Yes that’s one of the posts but the original which deserved all the credit is below. Effectively free money to spend on Adidas by first buying gift cards off groupon. https://www.hotukdeals.com/share-deal/3936692

Do you have more details please? I've searched HUKD but could not see anything about Groupon. Thanks. Edit: Oh I think I may have found it. Is this it? https://www.hotukdeals.com/deals/adidas-ultra-4d-running-shoes-now-ps7710-with-code-groupon-vouchers-free-delivery-at-adidas-3938222 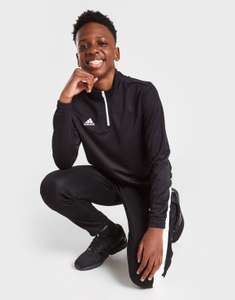 161°
Posted 22nd MayPosted 22nd May
Adidas Entrada 1/4 Zip Top Jnr 7yrs-14yrs £9.60 with code JD Sports (Free C&C)£9.60£1744% offJD Sports Deals
Get deal*Get deal*
Stay prepped on and off the pitch with this juniors' Entrada 22 1/4 Zip Top from adidas. In a black colourway, this slim-fit training top is made from recycled poly fabric for a lightweight …

Cheers just ordered the top and bottoms...forgot to use the code though...doh!! Heat still added 🔥 👌

It's not student only but code only works on the JD app.

I think this is for students only? I tried via UniDays and got the price £9.60

Try in the JD app pls.

The Sporting Goods Brand with the Three Stripes

Adidas is a German sporting giant. They manufacture tracksuits, jackets, football kits, t-shirts, hats and gloves. However, their most famous products (and the items HotUKDeals customers will probably be most interested in) are their iconic trainers and football boots.

Whether you want a pair of designer trainers for urban living or you need some running shoes to train for a marathon, this buyer's guide will provide the ideal introduction to what Adidas have to offer.

The story of Adidas started in the ashes of war. After World War I, a German man named Adolf Dassler started making sports shoes from his mother's house in a small town called Herzogenaurach. Dassler (who also went by the nickname “Adi”) eventually started up a footwear factory with his brother Rudolf. The company took the name Adidas after Adi Dassler, an identity that has stuck ever since.

Famously, the two persuaded Jesse Owens to use their spiked shoes in 1936 as he swept the board at the Berlin Olympics, which set the firm up worldwide as a provider of goods to the globe's sporting elite.

After World War Two, Adidas went from strength to strength. However, things weren't always so smooth. In 1947, Rudolf left the firm to form Puma, which remains a major competitor. The two brothers never really got on after that, which was a shame for their family but led to healthy competition in the sporting goods field.

By the 1970s both Adidas and Puma were equipping football teams, boxers and runners all over the world. Since then, the company has solidified its reputation (albeit with a few corporate hiccups along the way). It has become the NBA's official equipment provider, continued to kit out leading footballers and even expanded into golf wear and equipment. Sports and Adidas are still inseparable, and the German giant helps millions of sports fans stay active every day.

Adidas have become one of the world's big three sportswear manufacturers for a reason. Well, a number of reasons actually, and all are to do with the way their footwear and clothing performs during sporting activities.

For example, Adidas running shoes feature mesh uppers which mould themselves to the position and shape of the wearer's foot and keep them cool during long runs, and their outer soles have excellent grip, reducing the risk of injury in icy or wet conditions.

This kind of attention to detail runs throughout their product range. The reason is simple. Adidas work very closely with elite athletes who provide feedback about their shoes' performance. And they also work with biomechanics specialists to ensure that their designs work in tune with the body. This research and feedback filters down to everyday Adidas products, resulting in shoes and clothes that perform brilliantly at the gym, on the football pitch or on the running track. 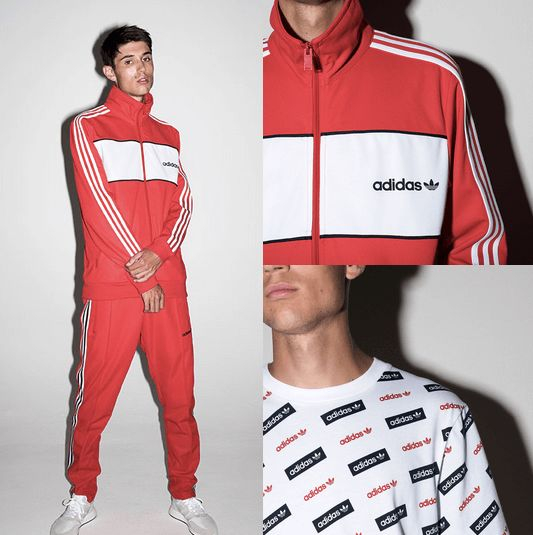 Adidas is most famous for its stylish high-performance footwear collection, which has provided World Cup winning footballers, Olympic gold medalists and Major winning golfers with the tools they need to succeed for over 50 years. Here are some of the most popular current brands. There are also plenty of older shoes that are collectable and still perfectly fine to wear, and we'll look at them later on. For now, let's get back to the current selection: 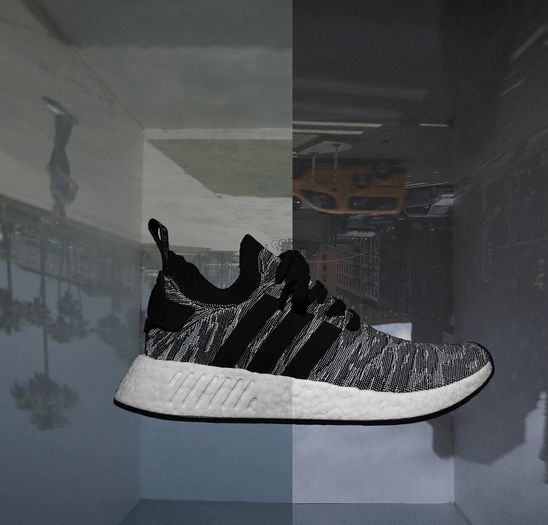 That's a general look at some of the company's footwear products. However, some people might be more interested in specific brands. Here are some of the most famous:

What Other Products do Adidas Sell?

Put simply, a lot. Adidas is an all-round sportswear manufacturer with an interest in almost every major sport, from rugby to ten-pin bowling. Here's a quick run down of the products you can expect to find at the Adidas HotUKDeals listings:

How to Choose a Pair of Adidas Running Shoes

If you are looking for a pair of Adidas running shoes, you'll find no shortage of options. Their Adizero range tends to be ideal for explosive athletes where speed over short distances is really important. Their Adistar shoes, by contrast, are adapted for long distance running, with slightly less bulk and plenty of muscular support. There are Supernova shoes which are like a mixture of the two, while Response shoes are a slightly lower-cost running alternative that still outperforms most other brands.

When should you buy a new pair of Adidas running shoes? Well, it depends on when you last replaced your training footwear. A general rule of thumb is to replace your shoes every 500 miles or so. However, who really keeps count of their distance like that? Instead, carry out some basic checks.

First, put your trainers on their base and look at the rear end of the shoe (the heel). If it lists to one side, then the heel may have worn away, leaving your shoes unbalanced and increasing the dangers of injuries. The state of the sole is crucial. Side panels and laces don't matter so much, but when the sole starts to erode, you could have problems.

How Can I Measure My Foot Size?

Adidas trainers have a reputation for coming up rather small, so before you make a purchase, carry out a quick size check and think about buying a size larger than you normally would. If it's not the right fit, don't worry. Most retailers operate 14 day free returns and you can request an exchange without any problems.

To measure your size, the best way is to trace around your foot with a pencil (with the foot placed flat on a piece of paper). Then, use a ruler or tape measure to gauge the distance from the tip of the toes to the heel and measure the widest part of the foot as well. To give an idea, feet that are 10 inches long are the equivalent of size 8s, and you can find more detailed information about UK and US shoes sizes on their website.

How to Buy Vintage Adidas Products

Let's quickly look at Adidas' vintage footwear, as this is an area that includes some classic designs. Shopping for vintage footwear can be a bit of a minefield, so here are some pointers.

Firstly, think about shoe size. Vintage shoes will probably be fine in terms of length, but things have changed over the years regarding width. Older shoes tend to come up slightly more narrow than today's designs, something all buyers should keep in mind.

Secondly, try to inspect the shoes if you can. If they are listed as “mint” then that's exactly what they should be. Don't accept worn patches of suede. However, for older varieties, some damage is probably inevitable (and can add character to their appearance). Just be on the lookout for things like loose soles and touched-up colour.

Finally, shop at the right places. HotUKDeals may have some Adidas vintage shoes available for time to time. If that fails, stores like Beyond Retro are great places to pick up classic Gazelles, while Asos and eBay are also options.

Buying Adidas Footwear and Clothing and Save Money

Now, the crux of the matter: how can you buy the Adidas shoes you want at the lowest possible price?

Shopping in sales is a must when you need to keep costs down. Thankfully, there's no shortage of retailers offering Adidas footwear, so whatever time of year you shop, there will be offers available. Check the HotUKDeals Adidas listings to find out whether merchants like Sports Direct, JD Sports, Zalando and Wiggle have any deals on at the moment. These could be simple money-off deals, but check for discount coupons and codes as well.

Adidas also include an Outlet section at their UK website, where thousands of products are regularly discounted by up to 50%. Be sure to check it out, and sign up to their newsletter for news about upcoming promotions.

Shop at the right time of year as well. Just after Christmas is a good time to pick up running and gym shoes, while Black Friday in November tends to deliver plenty of massive reductions as well. You can find them all at the HotUKDeals Adidas listings, so there's no reason to miss any of them.

Upgrade Your Sportwear with Unbeatable Adidas Discounts at HotUKDeals

Adidas is a go-to brand for footballers, golfers, boxers, runners, tennis players, cricketers – pretty much any kind of sport you can care to mention. Whatever products you need, from waterproof jackets to the most sophisticated football boots, you can find footwear and sports clothing at rock bottom prices by checking out the Adidas HotUKDeals listings.