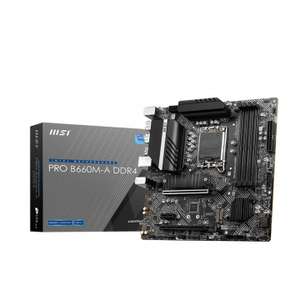 well, you can have even more fun by first disassembling it ^ ^

Putting it together is half the fun :(

Seems like cpu is already installed into socket "Assembled and tested by our technical team, the CPU, motherboard and memory are assembled with BIOS settings configured ready to be installed into a case."

Will they just ship the unopened components out to you so you can put them together yourself?

Really good deal, have some heat! 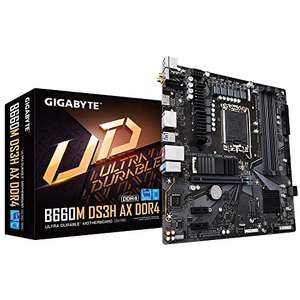 Yes, true, however i guess not that many people are buying brand new AM4 solutions now, most will be upgrading old PCs. I would also guess most people would not be able to tell the difference between the two. It makes little sense to pay the extra for a 5600x over a 5600. So it probably isn't only £10 cheaper.

The first Hardware Unboxed video demonstrates a 6% reduction in Cinebench R23 compared to the B660M-A Pro at stock PL. The performance gap increases to 28% when PL removed. PCB is around 90 for stock PL, it's manageable but your mileage may vary. And the second Hardware Unboxed video demonstrates a 6% increase in gaming performance at 1080p for the 5600X (:I

This motherboard would see limited use cases currently, maybe for a 12100F that must have WiFi? 12400-12600 is beaten by the 5600(X) for price/performance and anything over would be too much for the VRMs on this.

I got a 2 X 8gb kit of these in a bundle and, as a non-rgb guy, I have to say this is the amongst the nicest looking rgb parts I've ever seen. Very easy to get the colour looking very diffused and soft.

Superseded in raw performance by Patriot Viper box.co.uk/PVS432G360C8K-Patriot-Viper-Steel-DDR4-32GB-2-x-16GB-3_2942735.html?gclid=CjwKCAjwj42UBhAAEiwACIhADvQkHt8ifaxIBigvTJulEfIyBZGc0-HF4zsS_dMpv_2_ucZArGfWXBoCF48QAvD_BwE but looks like the cheapest option for RGB 32GB currently. Performance won't change much, but most systems that require 32GB see most of their budget go towards minimal performance increases anyways 😁 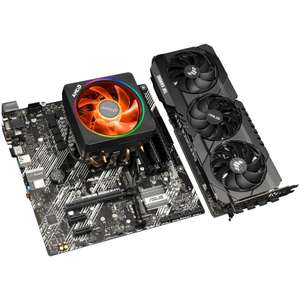 Very tempting but would have to sell on my motherboard bundle or this one to get s 3070 don't like selling motherboard PCs generally on eBay.

Only if your bone idle, there is no excuse NOW not to do your own research and pick your own components. Plenty of choice and prices have leveled out.

cant be worse than ccl 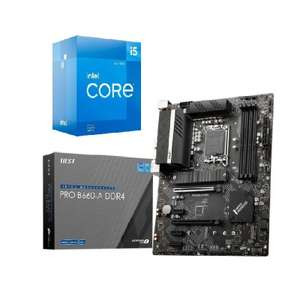 Also important to know that this processor has no integrated graphics so a discrete graphics card is essential.

Worth noting this motherboard is absolutely more than you'd need for a 12400F system unless you're insistent on doing an in socket upgrade to a high end SKU. These sockets usually last two generations, so an in socket upgrade is unlikely for most users. Something like a B660M DS3H would have enough functionality for most. 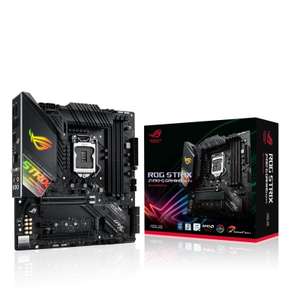 Sorry can someone explain what the deal is?

RAM stands for Random Access Memory. In contrast to magnetic storage devices such as your hard drive, RAM is memory that can be accessed randomly by your computer - that is to say, without following sequentially from other bytes. It is sometimes referred to as main memory and is the primary memory that determines the speed and performance of your computer.

Upgrading Your RAM: The Beginnings

Memory storage itself started from what we would consider nowadays to be pretty humble beginnings. Starting with a Vacuum Cube similar to those used in CRT monitors, memory storage didn't begin to evolve into its modern shape until the development of the transistor by Bell Labs. This allowed Latches - a configuration of transistors that could store a single bit of data - to evolve into Flip-Flops, which in turn evolved into Registers, the common component in most modern static memory cells. Since then, we've seen the first widely-adopted architecture for RAM, the Single Data Rate RAM or SDR RAM, become virtually obsolete in favour of the newer Double Rate Data architecture (DDR). 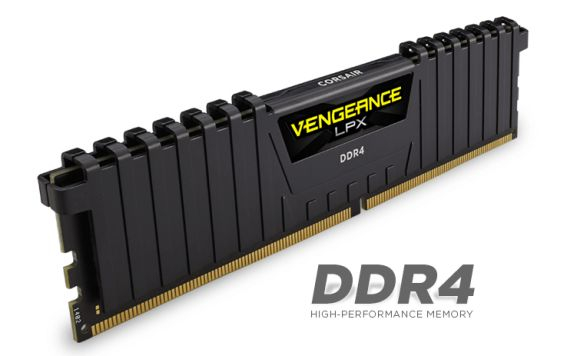 There are two main types of RAM, each with their own pros and cons. To summarise them briefly, DRAM (Dynamic RAM) is slower than SRAM because its electrical charge needs to be refreshed at intervals. However, as it uses fewer transistors, it takes up less space while providing the same amount or even more storage than the SRAM, and it is also significantly cheaper. For these reasons, it is more frequently used in modern computers than the faster Static RAM. However, SRAM uses less power and requires less heat dissipation. Within a modern computer device, DRAM is often used as part of the main memory while SRAM is often used for Cache memory. What is important to remember is that DRAM will be the main type of memory to worry about when it comes to upgrading your computer's memory.

One more thing to bear in mind in the acronym-filled world of Random Access Memory. The DRAM you find in your common computer is also often referred to as SDRAM (Synchronous Dynamic Random Access Memory), not to be confused with the afore mentioned SRAM.

Currently, there are four main types of SDRAM systems available. The one currently most prevalent in the marketplace is the DDR3, but a newer generation has come into the game, namely the DDR4. These four are important to know when you are upgrading your RAM, as if you are trying to insert a DIMM (dual in-line memory module) into your motor board, it will not work if it is working with one format and your own device is formatted using another.

On their own, each of these devices will store information effectively but won't increase the performance of your computer dramatically. However, one interesting avenue for upping computer performance is through the utilisation of RAID (Redundant Array of Independent Disks). This is a system that allows multiple drives to work together to effectively provide you with a single drive that holds the capacity of all your drives combined. It can also be effective in increasing reliability, as it can be configured to allow your computer to continue functioning even after a hard drive crash. This means increased data safety. There are several levels of RAID, but as a whole it is certainly creating new horizons for performance and data safety, making it well worth a look. We won't have time to go into more detail on RAID today, but we will keep you posted as it develops.

When it comes to upgrading your RAM, the first thing to confirm is that the chip you are using is compatible with the DDR system of your computer's memory. While DDR chips are harder to find these days, DDR2 chips are still widely available, though you will pay more and get less back in terms of increased performance than with the more prevalent and high-performance DDR3 and DDR4 chips. If your device is in a DDR format, it may be time to consider a full-system upgrade or even a new computer.

The Best RAM for Your Needs – Some Other Tricks

If possible, try to find a chip with the same speed as that of your motherboard. The speed is given in the specs and is the number with MTps at the end. Differences in speed can result in under-performance or even lags. If your chip speed is slower than your computer, your computer will be unable to operate at its full potential. If it is faster, your motherboard may have trouble keeping up with it.

Step one before going out to buy some more RAM is to consult your user guide and find out more about your computer’s memory slots and how the RAM is distributed. For example, your motherboard may have two slots with one 512MB chip in each or it may have a single 1GB chip in one of three slots. Determining this will allow you to know beforehand how big a chip - and even how many chips - you will need to buy in order to see a significant increase in your computer’s performance.

Who Does RAM Best and Should You Pay for the Premium Brands?

RAM is still an important part of your computer device's performance. However, recently more and more processes are being incorporated into the CPU itself. These processes now often include a memory controller, which allows for much more memory bandwidth. This extra bandwidth has downgraded the importance of RAM for overall performance. The upshot of this is that RAM costs have dropped dramatically. While the change in technology trends has downgraded the impact of RAM on performance, the significant drops in cost have also made it one of the most cost effective ways to bump up your system's performance. Recommendable RAM manufacturers that you should compare include: Corsair, Kingston, G.Skill, Team Group and Patriot.

So why pay more? The question still remains of whether or not there is any reason to pay much for a top-quality RAM extension. One of the arguments for forking out a little extra has to do with something called memory latency. This one is a little complicated but, in short, latencies measure the number of operating cycles it takes to execute a task within the memory. The better the memory kit you have, the better this will function and the more improvement you'll see to your devices performance. Each memory kit you purchase will give you a rating for the latencies. All you really need to know is the lower the latency numbers, the better. 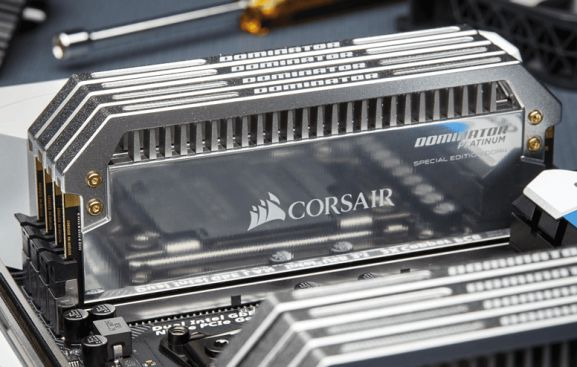 You can purchase additional RAM from street stores such as Currys, Maplin, CeX or Euronics easily, though perhaps not at the most competitive prices. Online vendors such as Crucial, Ebuyer, Pixmania and even Amazon offer good prices and an excellent level of variety, however, if you are unsure of what you need, it might be better to call into a store first and speak to someone with a bit of know-how.

Generally, electronics tend to be cheaper at certain times of the year. Especially when it comes to shopping events such as Black Friday and Cyber Monday. After the rush of Christmas it´s also wise to take a look at RAM deals during the January Sales.

Keeping up with the latest changes in the world of RAM can be pretty daunting. This is why HotUKDeals keeps an eye on everything new in the world of memory and brings all the latest and greatest RAM deals to you here. Stay tuned on this page for your next RAM bargain.