We had heard from a few friends and contacts that Nintendo Switch consoles are proving hard to get hold of at the moment - I guess they are an obvious thing to get to help entertain yourself during the lockdown (fi you have the cash, and aren't desperately trying to homeschool two kids while doing your job.... just for instance!)

From a search around online this morning, I can hardly see any available at all, certainly not at well-known retailers, or those with deals posted on here before now. So I was wondering if anyone else had been able to find one, and thought maybe we could share some intel for those who are looking to buy one to fill their time!

Found some news coverage of versions of the console selling out in US and Japan, but none here yet:

UPDATE: Studio have stock of the Nintendo Switch Neon Red and Blue Console in stock at £284.98

The soon to be released Nintendo Switch Lite console is still (at the time of writing) still available to pre-order from Amazon and Shopto (£199.85) ahead of it's upcoming April 24th release.

Pricing for the Nintendo Switch Lite is sitting around its RRP at the moment, so making use of any bundles you might find will most probably sit in your favour. For example - Game's offering of a Nintendo Switch Lite (grey or yellow) bundled with a copy of Animal Crossing: New Horizons is saving you just over £10.

Other newly released game are available bundled at this price with the Nintendo Switch, including Pokemon Mystery Dungeon: Rescue Team DX.

Game are currently displaying a +£4.99 delivery charge at the moment, which may change in the future. If you're looking for a solus Nintendo Switch Lite console, check out Currys. They have Grey, Yellow and Turquoise delivered for £199.00.


Check out the links below for deals on the top 10 Nintendo Switch games.

Animal Crossing: New Horizons
Super Mario Party
Mario Kart 8 Deluxe
Pokémon Mystery Dungeon: Rescue Team DX
Pokémon Sword / Shield
New Super Mario Bros. U Deluxe
Super Mario Odyssey
Luigi's Mansion 3
Mario & Sonic at the Olympic Games Tokyo 2020
PostTweetShare Share with WhatsApp Share with Messenger
Community Updates
Misc
New Comment Subscribe Save for later
Top comments
24th Mar
I managed to get a Nintendo switch animal crossing today couldn’t believe they had it( got it from Tesco)
27th Mar
Smyth's letting you pre-order the Neon for £279 saying expected in stock 3rd to 10th April
Annoyingly all the bundles have been removed from the site though
25th Mar
Free switch for NHS workers
24th Mar
I'm after one as well but it seems stock is completely dried out in the UK.

CEX can be very hit and miss, I would definitely not buy from them
249 Comments
24th Mar
You can get a lite. No chance of getting the big one at rrp. You can buy for an extra £60 at Cex. Those are your only options atm
24th Mar

What state are the CEX ones in? I already resent paying 20% over RRP, even more so if they're marked/damaged in any way
24th Mar

I can’t see the one that they’ll be sending to you should you purchase so I have no idea but you can return if not happy
24th Mar
I'm after one as well but it seems stock is completely dried out in the UK.

CEX can be very hit and miss, I would definitely not buy from them
24th Mar
offergames.co.uk/col…ife


Jacked up but it's something
24th Mar

…https://offergames.co.uk/collections/nintendo-consoles/products/nintendo-switch-console-grey-longer-battery-lifeJacked up but it's something

Never heard of that site before, are they reliable? And are those consoles new or used?
24th Mar

It's easier on my hands and much lighter.
24th Mar
I managed to get a Nintendo switch animal crossing today couldn’t believe they had it( got it from Tesco)
24th Mar

Somebody checked stock of me on here and had some available. I went down to my local and they said they had none.. although they had a couple cases left on the shelf.
24th Mar

No idea I'm afraid. I found them through a price comparison website. Only place that's selling them under £500 as far as I can tell.
24th Mar

I ordered a bundle of the grey console (improved battery version) with Luigi's Mansion for £349 + postage. Let's see what happens... Argos cancelled my order from Sunday so not going to hold my breath.
24th Mar

It's tempting at that price to be honest. I can't imagine large retailers will have stock anytime soon.

Let me know when it ships please!
24th Mar
I've seen one from a Spanish website called esdorado.com, is it legit?
24th Mar
I ordered a turquoise one from Argos this morning for £199 and got animal crossing for £20. It’s due to arrive tomorrow, fingers crossed.
I know there have been better deals out there but best I could find without leaving the house!
24th Mar

I think the pressure is on the normal nintendo switch, there is still stock around on the lite one Marisa so your order should be fine.
24th Mar

Order was cancelled. Didn't get an email to tell me, just happened to switch back to the tab that I ordered on and saw the status.
24th Mar

They have stopped this deal now.
24th Mar 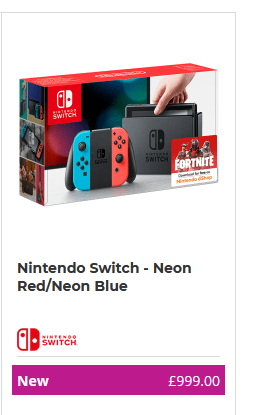 It's just back in stock on Amazon France, came to £320 with delivery 2-3 days delivery. Only issue is you'll get a continental plug but that'll have to do for me.

Hopefully that means Amazon UK get stock soon, I've had one on pre-order for a while now and still no update. Ordered one from CEX for £340, but hopefully will be able to return it if it's not in good condition.
24th Mar
Amazon UK isn't even shipping anything until Sunday now. Seems Amazon France is probably a little bit less busy seeing as lockdown started a while ago there.

Please let me know if your Amazon UK switch gets shipped, I'll try to cancel the France one.

They do have it up there with Diablo for £499. Still £200 over price though.
24th Mar
I work at argos leicester and we have loads of switch lites but not the Nintendo switch due to this virus we have shut all our stores but you can still get from your local argos in side Sainsburys as they are still open and home delivery services are still available as well
24th Mar

Get it on French Amazon and get a UK plug for a fiver. You'll still be ahead by about 200 quid
25th Mar

That's the 3rd party market, it shows as their stock when it's really not, makes it seem like they are selling it, not a good sight in general though
25th Mar
I thought it was bad enough when I paid £299.99 with Mario Kart
25th Mar
Studio now seem to be stocking Switches - or at least allowing you to order them at RRP. Managed to snap one up and says delivery can be up to 10 days, but comes from the supplier so if it's direct from Nintendo could be even longer

Good find, looks like they're selling AC versions too. I'm holding out for a grey one, so I'm keeping my eyes peeled.
25th Mar
Nintendo switch in stock! https://www.studio.co.uk/shop/en/studio/nintendo-switch-hw-(neon-red-neon-blue)?searchTerm=nintendo%2520switch&pageView=&pageSize=40&orderBy=
25th Mar

Do you have to pay by credit?
25th Mar
Just bought mine (AC) from studio, paid with debit card, not on credit. Let’s see if it turns up!
25th Mar

Do you have to pay by credit?

Nope, you can pay by Visa or Mastercard, but that adds £4.99 for delivery
25th Mar
Ordered AC as well! Fingers crossed!
25th Mar
If you use the Studio App and use code 026 you get free delivery. Only for today
25th Mar
Tesco are doing a switch lite with either ACNH, mario party, mario kart or links awakening for £199. Wasn't advertised in my local but still came to £199
25th Mar

Nope, you can pay by Visa or Mastercard, but that adds £4.99 for delivery

I used a code to get free delivery
25th Mar
Anyone find Two Point Hospital in stock anywhere?
25th Mar
They have stock in curry's and very
I use stock informer they compare items in stock over various sellers
Edited by: "Jordan_Carver" 25th Mar