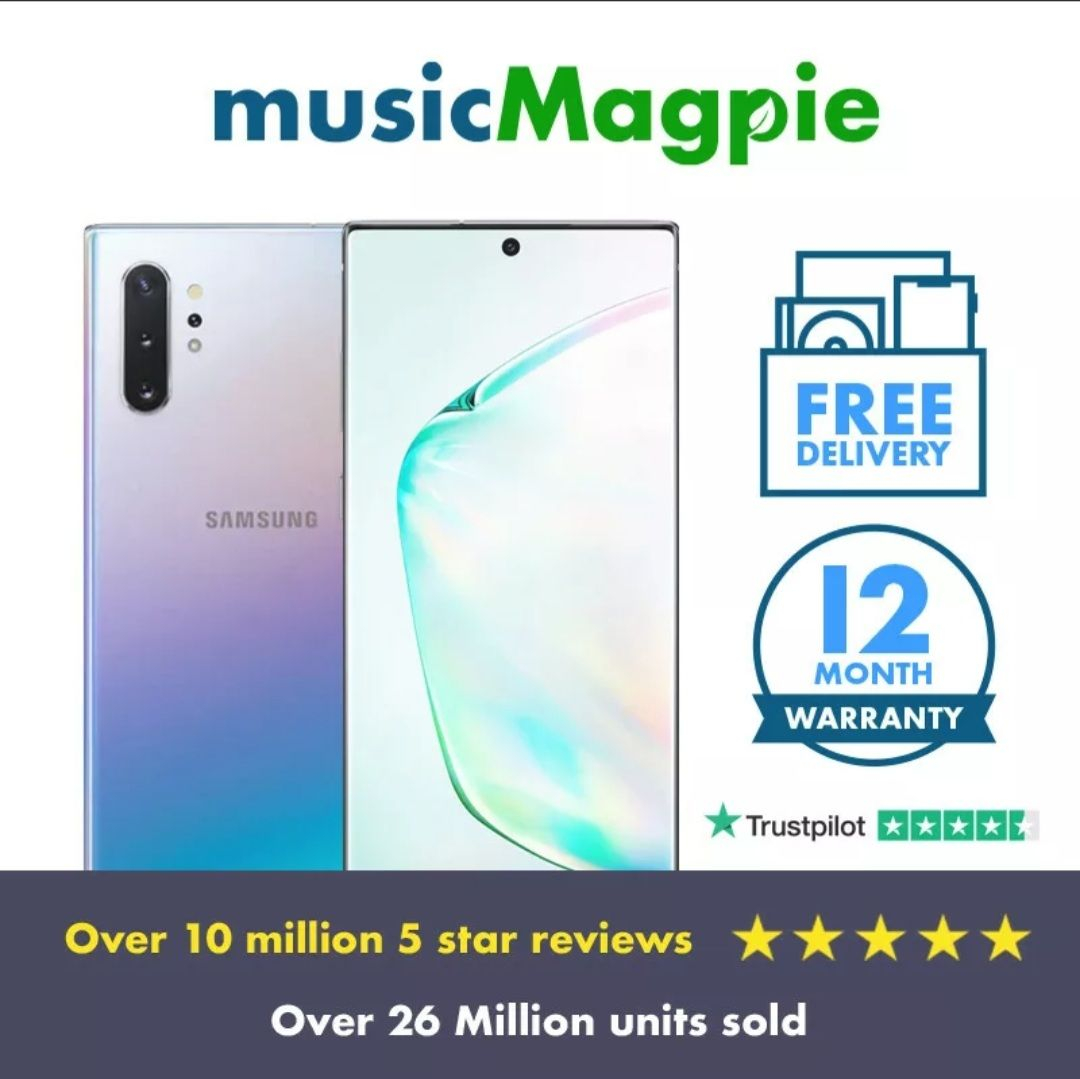 No issue pal, notified them 30mins after delivery

It's a little hit and miss, saying that I bought iphone xs max last year for my son and chose 'good' condition and the phone was mint &#x1F44C;

Ordered and hoping this has 5G.

Is the camera on the note 10 much cop? 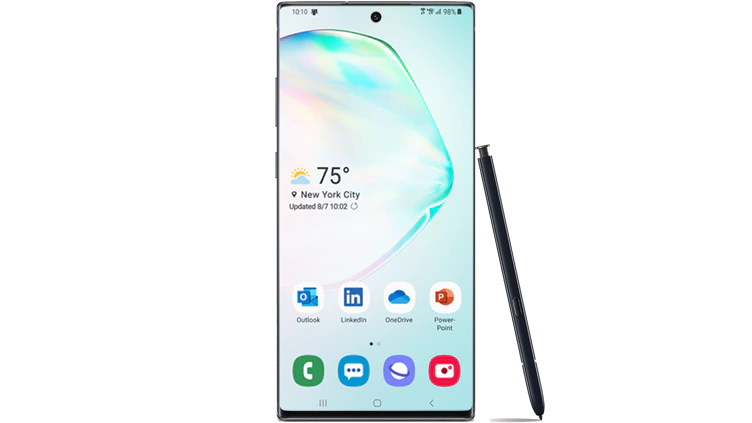 Mine just arrived with a dead battery :(

Thanks, I bought it through Perks at Work/Next Jump which had 10 wow points (effectively 10% cash back) off before tax price - 512gb for £505 brand new is a great price for a phone I'll keep for 4 years at least knowing me! :)

Had a note 10+ for 9 months last year and whilst it was a lovely looking phone with a great screen. The battery life isn't great on these even with a fast charger it became a tad tedious having to charge more than twice a day 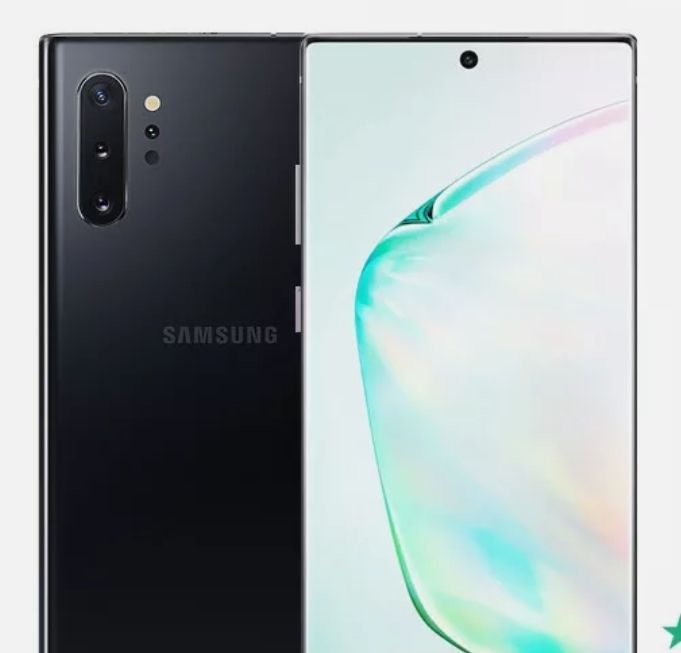 224° Expired
Posted 20th MayPosted 20th May
Samsung Galaxy Note 10 Plus 256GB Smartphone - Refurbished Good Condition Black £305.99 / Glow £313.64 With Code @ Music Magpie /Ebay£305.99 Free P&P FreeeBay Deals
Get deal*Get deal*
4G version. Low price. Good – This product is in good cosmetic condition, there will be signs of use, some of which may be heavy. The item has been fully tested, restored to fa… Read more

Good deal that one (ninja) XD 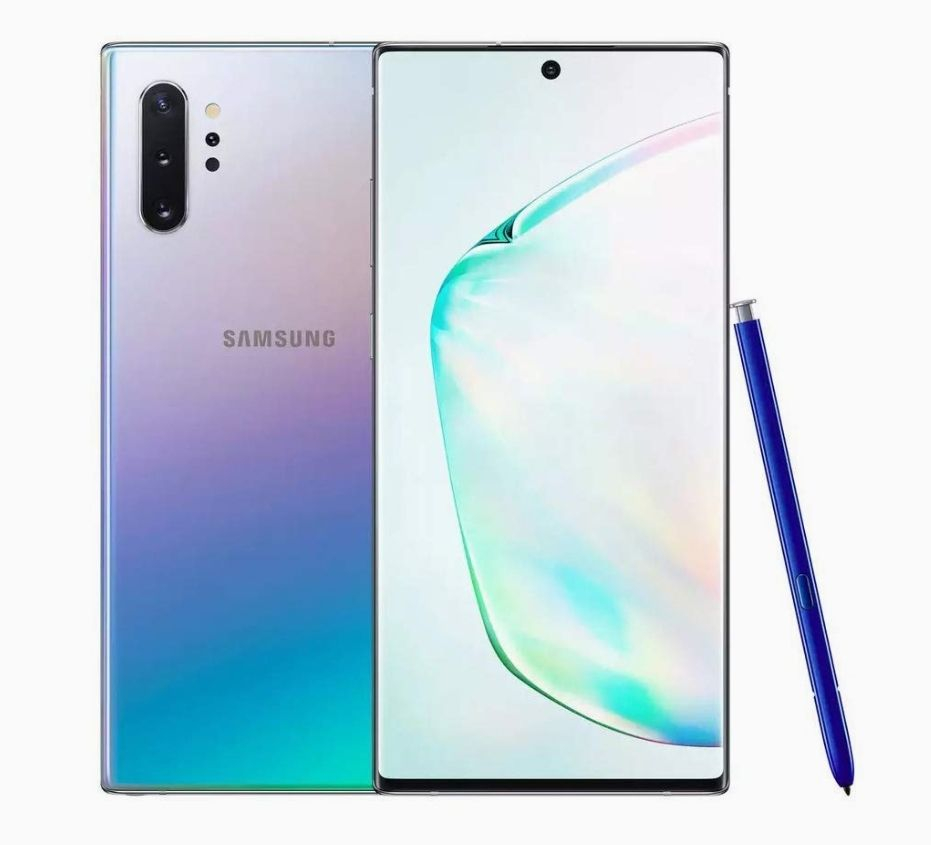 Ok so i received my phone today and after spending all evening messing about trying to get it set up and working, it refused to connect to mobile data and kept showing this message: "phone not allowed for voice" I did some googling and checked the IMEI number: So just beware if you have ordered one - looks like some of these might be stolen. Ive contacted the seller and ill see what they have to say in the morning. Im annoyed because ive ordered £25 worth of chargers/cases now for a phone thats worthless! Im hoping they have another to send out. 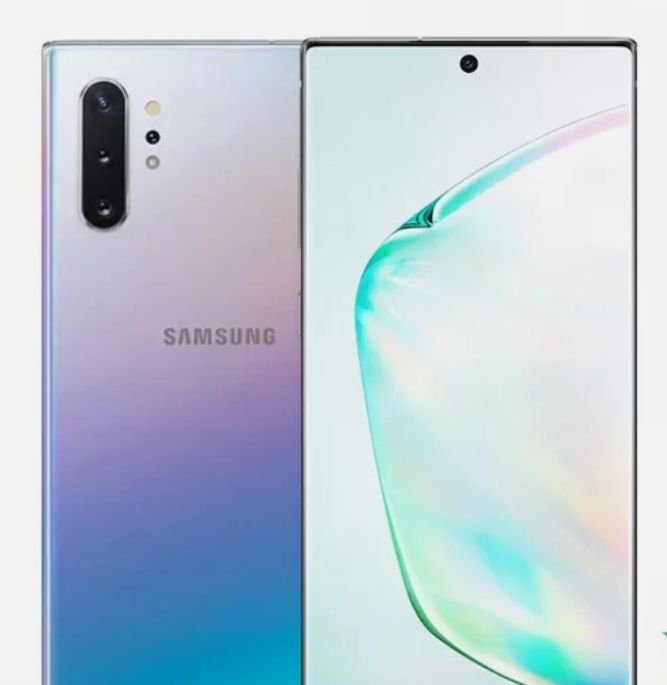 It's definitely a big step up in camera and performance and the screen is just as good. Grade C might be a disappointment if it's battered but definitely a good option if you can get one in reasonable condition. The only thing I don't like is the under screen fingerprint sensor - it's not terrible but it's slower than the one on the back of the note 9 and there's no real benefit so just an unnecessary gimmick IMO but it seems the norm these days.

Good to hear - luckily, lack of a headphone jack isn't a big deal for me. (y)

If you can manage without a headphone jack it does feel like a decent upgrade over the note 9.

If not buddy very easy returns 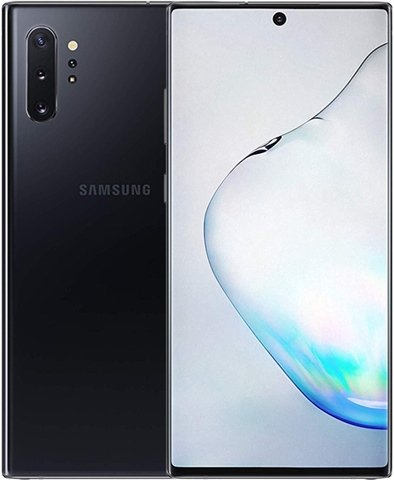 -175° Expired
Posted 16th MarPosted 16th Mar
Samsung Galaxy Note 10 Plus 5G 256GB - Grade B only £410 @ CEX£410 Free P&P FreeCeX Deals
bargain to be had CEX has some great competitive prices. Whilst their shops are shut CEX have really made an effort in keeping loyal customers by offering really decent prices … Read more

how much is that PS5 normally?

Whilst it's not a bad price for 400+ quid i'd expect at least a 90hz screen now at the very least for this kind of cash. Technology moves on fast.

The most striking feature of the Galaxy Note 10 Plus is the 6.8-inch screen and the tiny bezel. Developed with HDR+ and AMOLED visuals to produce a superior image, it elevates gaming, watching video and photography to another level. Wireless charging, vast amounts of storage and an S Pen with gesture controls, make this a smartphone for people who want everything.

Samsung launched the first Galaxy Note in 2011 and like each subsequent version it was powered by Android. The Notes have a larger than average screen to suit users who want to access the controls with a pen, as well as a keyboard. The Galaxy Note series phones are known as phablets because of their size and have been globally successful for Samsung, selling over 50 million units by 2013. 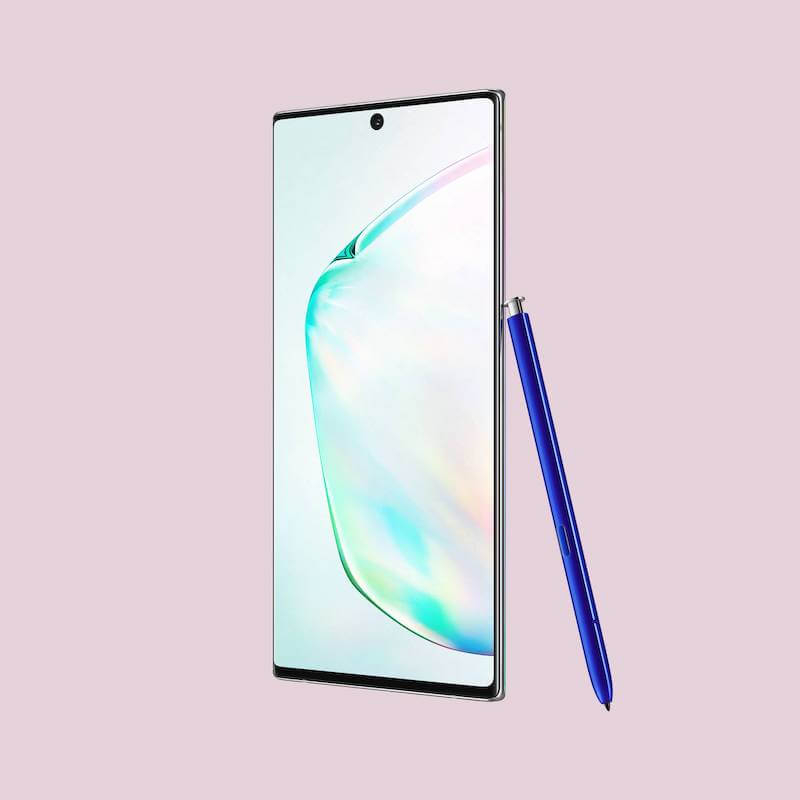 At the same time as the Samsung Galaxy Note 10 Plus, Samsung is releasing the smaller Note 10. Aside from the size, the two phones do look extremely similar, but in fact, there are a couple of key differences

Although it is being marketed as a smaller Note 10 Plus, the Note 10 is quite a different phone. It offers better processing speeds than the Note 9, more storage and an advanced S-Pen, but the screen resolution and battery life don’t match up to those of the earlier phone. Therefore, if you are upgrading from the 9, you’ll need to go for the Note 10 Plus for a noticeable improvement.

The Note 10 Plus is a great-looking phone with an impressive suite of upgrades compared to past Galaxy handsets, but the advanced tech will not win over everyone. Rather, it is a great choice for people who enjoy having a powerful phone with plenty of bonus features and are willing to pay the eye-watering price tag.

Does Note 10 Plus Have a Headphone Jack?

No, there is no traditional headphone port on the Note 10+, but this brings it into line with other smartphones. The trend allows the manufacturers to include a bigger battery and increase the gadget’s water resistance. To make up for the loss, Samsung has included USB-C earbuds made by AKG, so you don’t have to buy a wireless pair.

When 5G networking technology comes to your local area, you will be able to use this faster service with a Samsung Galaxy Note 10 Plus.

Does Note 10 Plus Have Expandable Memory?

Yes, there is a MicroSD slot which expands to take the available storage to 1TB.

Is Note 10 Plus Waterproof?

No, it is water-resistant. This means it should survive a small amount of freshwater spilt on it, if the liquid is quickly removed. You can’t immerse the handset in water and other fluids like beer, coffee or cola could well do irreparable damage. 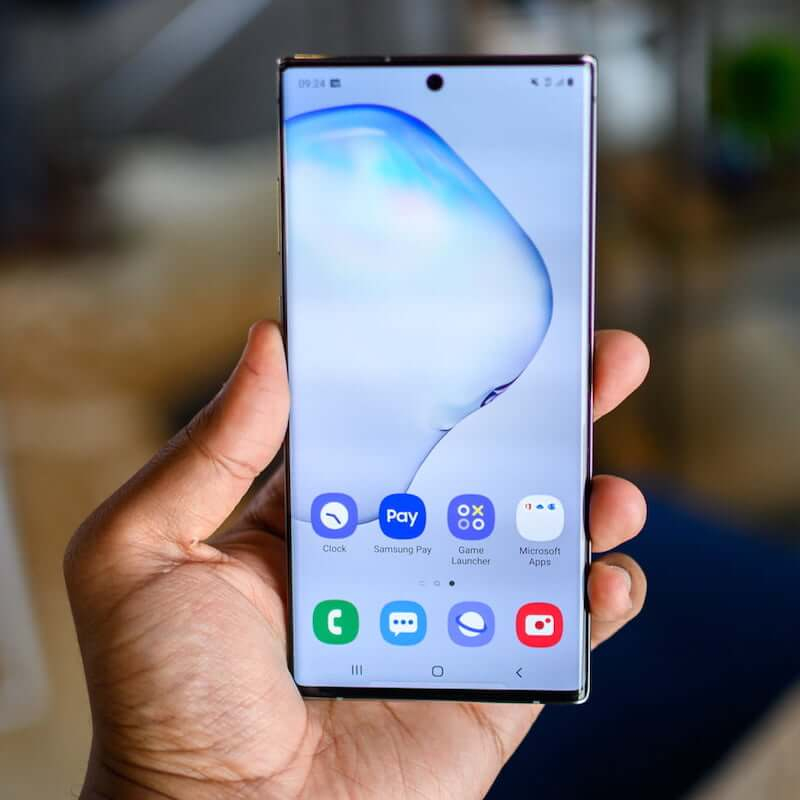 Both Samsung and Huawei have created premium phones, but until now the P30 Pro offered the best value for anyone wanting an advanced device. With the launch of the Note 10+, this will all change, as its stunning new features are more than a match for the P30 Pro. Many commentators believe that the latest modifications to the Note range have been inspired by this Chinese brand, especially when it comes to the wireless charging feature and the look of the phone, but how do they measure up against each other?

With many comparable qualities, there is no clear winner between these phones. It comes down to what you are looking for as a consumer. Features like the Note 10 Plus S Pen and the AMOLED display will appeal to many, but if you need a zoom lens, the Huawei phone will serve you better.

The Samsung Galaxy Note 10 Plus Specs

Selecting a Colour and Storage Size

In the UK, the Galaxy Note 10 Plus is available in just two of the possible four colours. The most unusual is Aura Glow, an iridescent finish that was apparently inspired by the Northern Lights. If you prefer to stick with a classic shade go for Aura Black, which has a slightly reflective sheen.

As for storage, the majority of casual users will have more space than they will ever use with the 256GB phone, this will manage 100s of apps and photos, as well as a large library of music and high graphic games. The 512MB version is for you if you’ll be keeping all your photos and videos on the phone, along with several games and an extensive music collection. Even so, you’ll struggle to fill the entire 512MB, but if that does happen, just add a Micro SD card.

Keep your beast of a phone in pristine condition with some carefully chosen accessories. 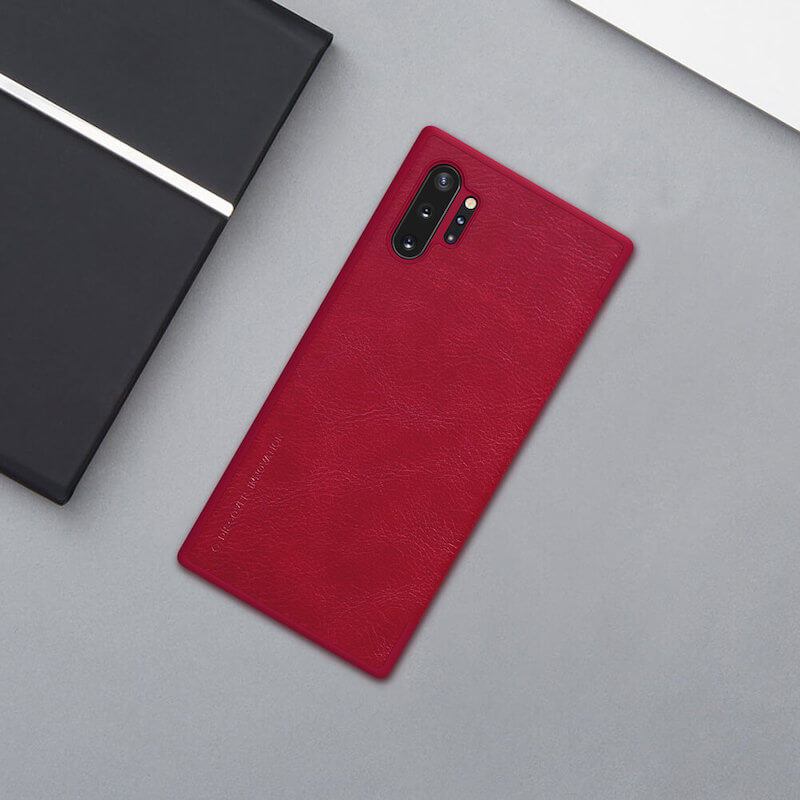 How to Identify a Galaxy Note Phone

Many modern phones have handsets that look very similar, but there are reliable ways of finding out which type of Galaxy Note you have. The easiest method is by opening the phone app and dialling *#06#, this prompts information about your device, including the serial number and the IMEI to appear on the screen. Alternatively, you can open the settings app and select About Phone or About Device, if you have an older handset. This will open a screen which shows your phone number, the serial number, the model number and the IMEI.

Finally, some Samsung phones have information printed on the back, so just turn the gadget over to find the details. Older Galaxy Notes print the information beneath the removable battery. Never attempt to take the backplate off unless you know the phone is serviceable, but if you can pop out the battery, Samsung print the details underneath.

Advantages and Disadvantages of the Samsung Galaxy Note 10 Plus

There is no denying that the Samsung Galaxy Note 10 Plus is an epic phone, but are there any factors which could put off potential buyers?

Galaxy Note 10 Plus deals can be found at all the main smartphone providers with tariffs to suit every budget. At O2 you can build a plan depending on how you use the phone, while at Vodafone and ee the upfront cost is very low, but this does mean a higher monthly payment. The handset can be purchased outright from Samsung and it is also available sim-free at Very or the Carphone Warehouse. Our listings also provide updated Note 10 plus sale offers from leading UK merchants like Three, Carphone Warehouse, Very, Mobiles.co.uk, Amazon, and Samsung themselves. It's a great place to compare offers, and to drive down the cost of purchases via discount codes.

As this is a recent release there are unlikely to be any Note 10 Plus sale prices for a while. However, the cost of the handset and tariff deals will decrease over time and as new versions are released. In the meantime, look for flash reductions around Christmas, over the Black Friday weekend and during other sales events.

hotukdeals will keep consumers updated on Note 10 Plus offers as they are announced on a page dedicated to the smartphone, browse the latest news on tariffs and handset prices on the hotukdeals dedicate Note 10+ deals page.