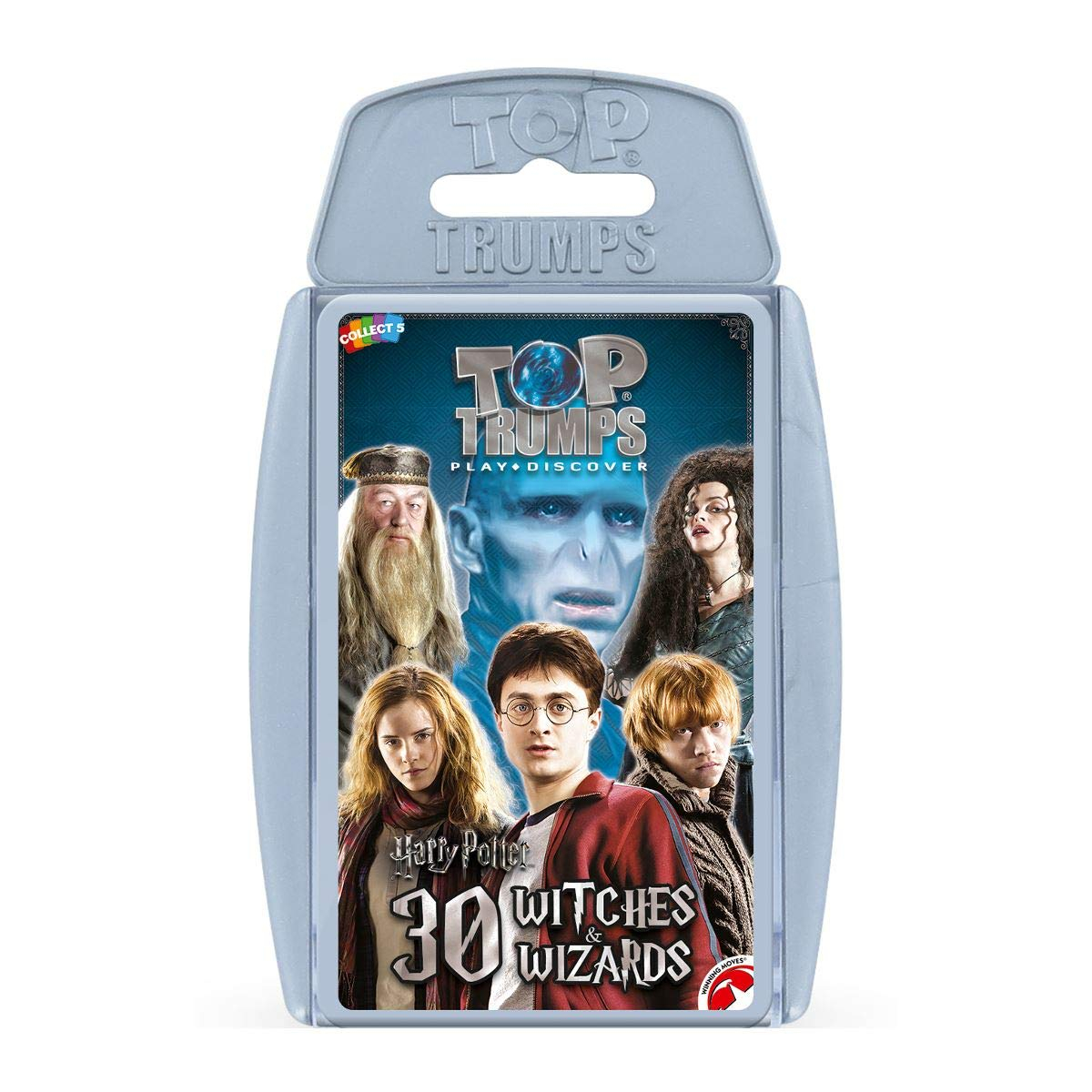 66°
Posted 2 h, 50 m agoPosted 2 h, 50 m agoLocalLocal
Top Trumps Harry Potter Wizards Edition - Half Price - £2.50 instore at Tesco Purley
£2.50Tesco Deals
Another deal I thought I would share, again, not a big ticket item but great party bag item or just as a gift in itself. Item was marked as discounted, but there was good stock. … Read more
Get dealGet deal 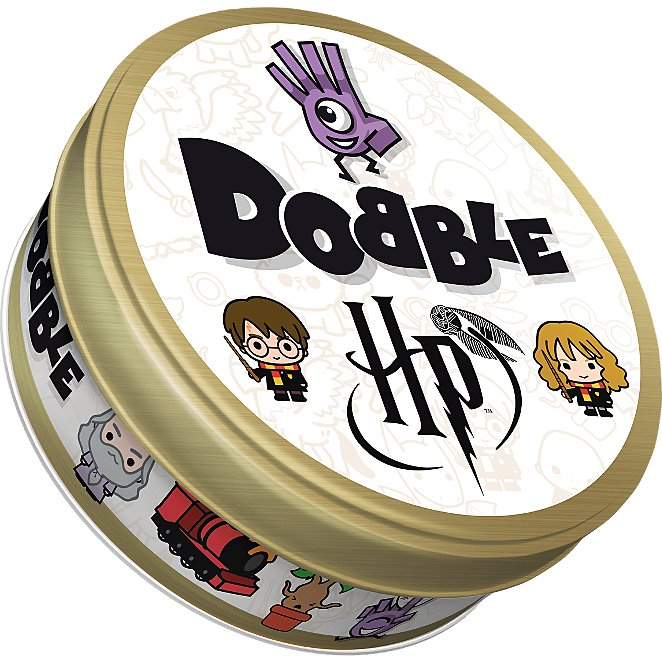 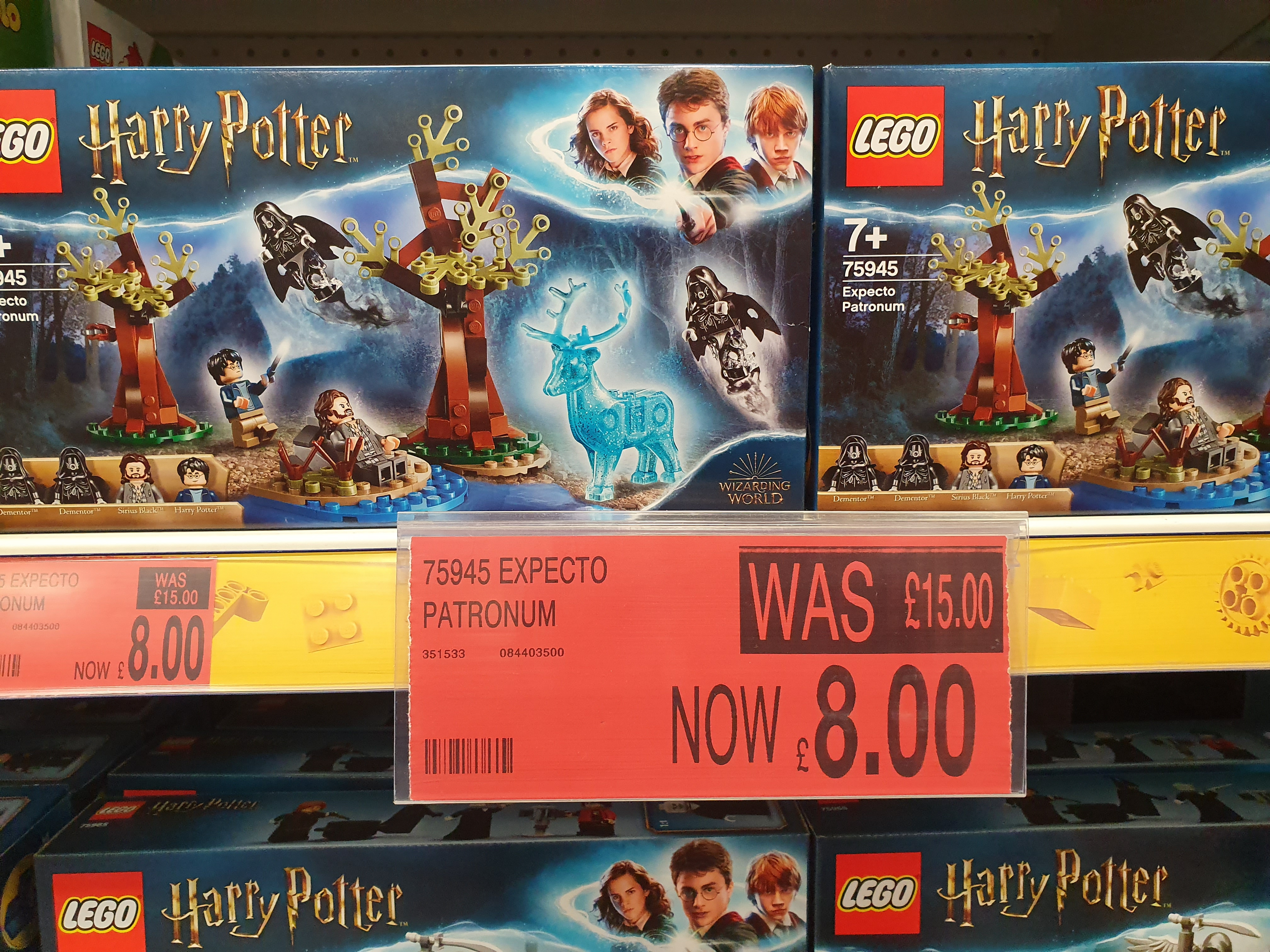 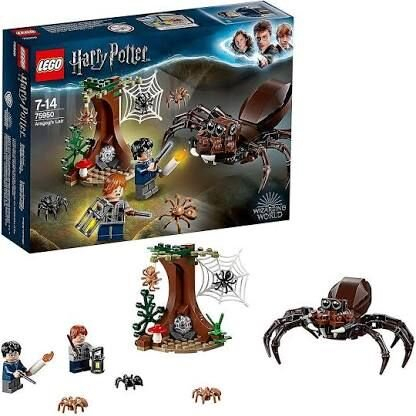 Harry Potter is a globally recognisable brand with 450 million novels sold in 79 different languages. The books inspired a major film franchise, a theatrical production, many toys, games, lines of clothing and adult collectibles. In the UK, you can visit ‘The Making of Harry Potter’ at Warner Bros. Studios to see where the films were made and view the original sets. In the US, ‘The Wizarding World of Harry Potter’ is a part of the Universal Studios Orlando theme park, with rides, recreated sets, and shops.

JK Rowling wrote the first Harry Potter book in an Edinburgh cafe during the early 1990s, by 1995 she had presented the manuscript to a number of publishers. It was accepted by Bloomsbury and published in June 1997. ‘Harry Potter and the Philosophers Stone’ was such a success that the following year, the book was released in the USA and Rowling sold the film rights to Warner Bros for a reported £1 million. There are seven Harry Potter novels in all, and eight films, because the final novel, ‘The Deathly Hallows’, was too long to fit into one feature. Rowling was still writing the final books in the series when the first films were being made.

Now entering the 20th anniversary of the first novel’s publication, Harry Potter has developed into a global brand with spinoffs and new products being released all the time. Fans of the fantasy series can buy exclusive items of merchandise relating to their favourite characters, films to watch at home and games to relive the experience of reading the books. Here’s a list of the principle Harry Potter branded products and experiences available:

The Harry Potter Books and Spinoffs

Harry Potter was introduced to the world over seven novels, gaining popularity amongst children and adults alike. The storyline continues throughout every book, each taking up where the last left off. The central character, Harry, is saved from a dark wizard as a baby and grows up during the series to become a brave, honest and dedicated young man. 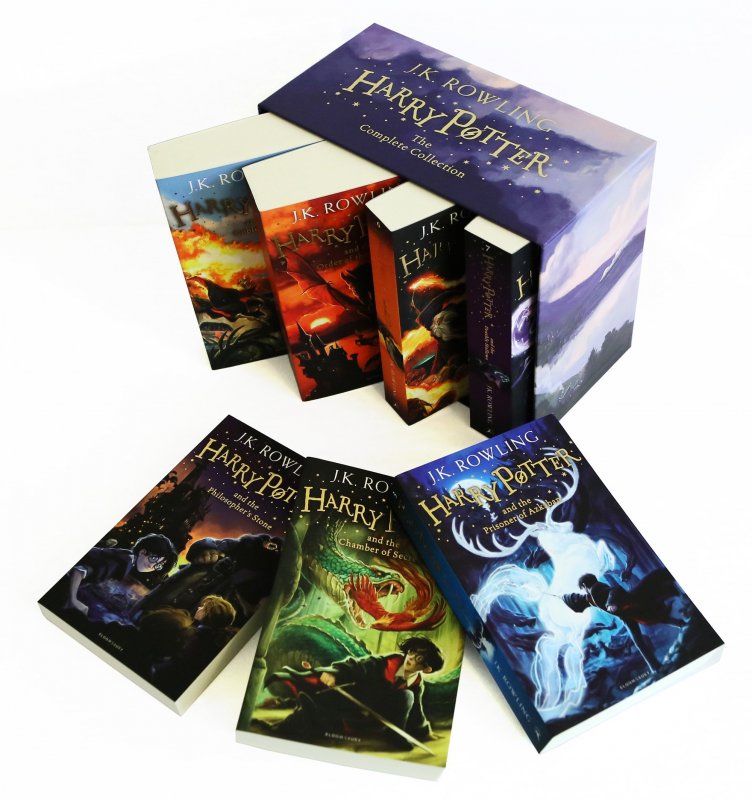 The eighth story in the series is ‘Harry Potter and the Cursed Child, Parts I and II’, it was published in 2016. This deals with events 19 years after the seventh book and focuses on the adventures of Harry’s son, Albus.

In a spinoff book entitled ‘Fantastic Beasts and Where to Find Them’, released in 2001, JK Rowling introduces new characters, locations and creatures to the Harry Potter universe. The action is set in the 1920’s and the book has already been made into a successful film, with the same title.

JK Rowling wrote two books that added more characters and history to the Harry Potter universe; they were ‘Quidditch through the Ages’ in 2001 and ‘The Tales of Beedle the Bard’ in 2007.

For people who want to purchase every book at once, there are many different box sets containing the entire collection with variously styled covers.

To celebrate the twentieth anniversary of the first Harry Potter book, Bloomsbury Publishing has released eight special editions of Harry Potter and the Philosophers Stone. These are illustrated by the artist Levi Pinfold and each features a different, distinctive, dust jacket. 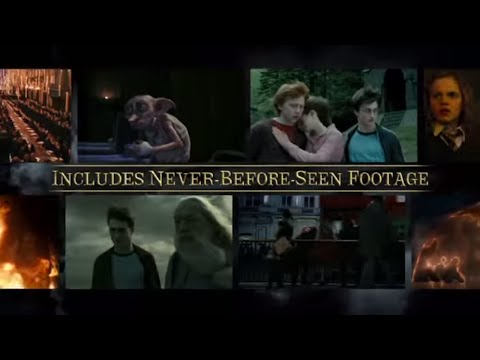 ‘Harry Potter and the Cursed Child’: Book and Play

Developed by JK Rowling in collaboration with a wider team of writers, set designers and producers, ‘Harry Potter and the Cursed Child’ is a stage show that is set 19 years after the last novel, ‘The Deathly Hallows’. It follows the adult Harry and his son, Albus, through a series of adventures and encounters with familiar, as well as new characters. The play is suitable for adults and children from aged 12, it is split into two parts. Audiences can choose to view both halves in one night, or on consecutive nights. A book featuring the play’s script has been released in digital format and print is titled ‘Harry Potter and the Cursed Child Parts I & II’. Tickets are in high demand and to avoid touts buying them up in huge numbers, they are released in batches at certain times of the year, check the website at www.harrypottertheplay.com for details.

Success in the literary and film industries has resulted in the production of many Harry Potter video games. The first eight games were developed by Electronic Arts; each title corresponded with a film title in the series and the storylines were also followed closely. These were released between 2001 and 2011, and are available for the PlayStation 2, PS3, PS4, Wii, Xbox, Xbox 360 and the Nintendo DS. There have also been three Harry Potter LEGO titles, these also replicate themes from the films, but the characters are rendered like Lego figures, and game-play includes building tools and equipment from bricks. Released in 2001, LEGO Creator was the first title of its kind; it was followed in 2010 by LEGO Harry Potter Years 1-4 and a sequel, LEGO Harry Potter Years 5-7, followed in 2011. These are available over most platforms, including the Nintendo 3DS, the Wii, the PS Vita, PlayStation 3, PlayStation 4, the PSP, PC’s, and the Xbox 360. 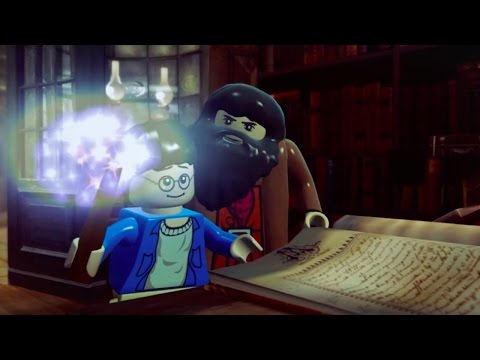 From soft toys to wands, jigsaw puzzles, dressing up clothes and Top Trumps card sets, there are plenty of toys to choose from featuring Harry Potter characters like Hermione Granger, Ron Weasley or Lord Voldemort, and themes. You can also find familiar games like Scrabble, Monopoly and Cluedo with Harry Potter branding, these enable you to play as a character from the book and the game play also includes places, events and situations from the novels. Playing cards with Harry Potter characters are available from many vendors online, as are replicas of props like the Sorting Hat, Extendable Ears, and Quaffle Balls. For children who like crafting, there are 3D light up dioramas, small plaster of Paris figures to paint, Build Your Own Hogwarts kits and Harry Potter LEGO sets. 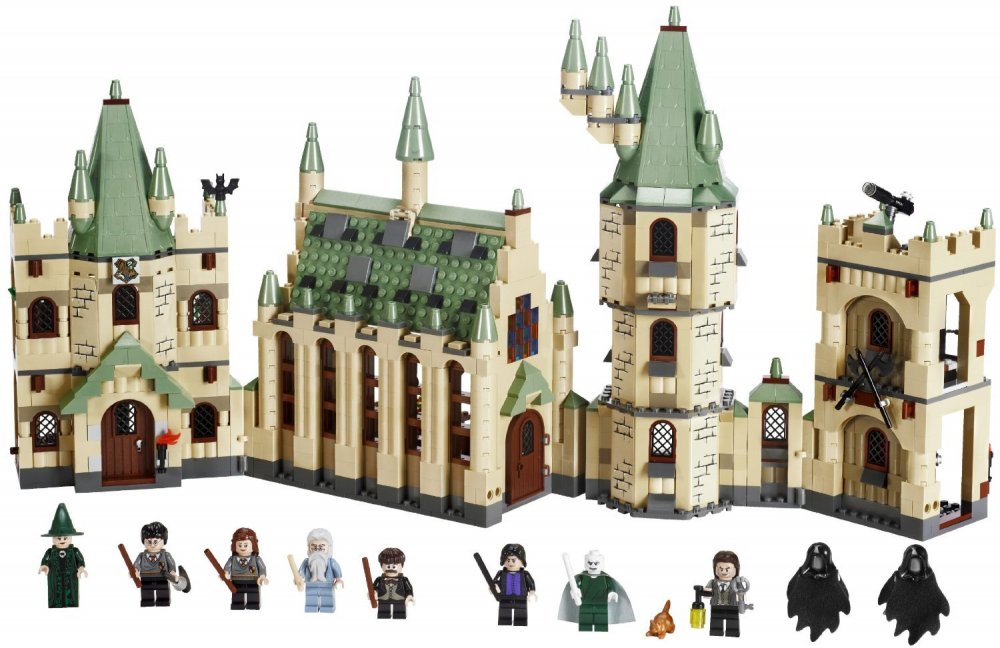 Harry Potter collectibles are focussed on an adult audience and are not usually suitable for children. There are a wide range of replica wands that are designed to look like those used by specific characters in the books and films. These are sculpted in a resin and feature decorative elements to the base, each is presented in a special box that carries the brand's logo. You can also find homewares like mugs, coasters, passport holders and tote bags, or small vinyl figures to display at home.

At the more exclusive end of the market, there are officially licensed action figures with articulated limbs and hand painted facial features. Most are around 1/6th scale and show Harry Potter characters in various types of clothing, to represent different scenes in the film or book. They are mounted on a solid wood base, with a plaque displaying the character’s name. Some come with accessories, like glasses, wands, owls and broomsticks.

Many high-street stores sell children’s clothing that has quotes from the Harry Potter books, images of the characters or the signature branding from the film. There are also themed pyjamas for kids, baby clothes with the Hogwarts logo, and t-shirts with one of the school's four houses, Gryffindor, Slytherin, Ravenclaw, or Hufflepuff.

For adults, the choices are very similar, with a wide range of hoodies and t-shirts designed to fit men and women, along with varsity jackets, vest tops, scarves and ties. The adult clothing range includes many items featuring the Dark Arts side of the franchise, with quotes about the wizard prison, Azkaban, and images of Death Eaters. 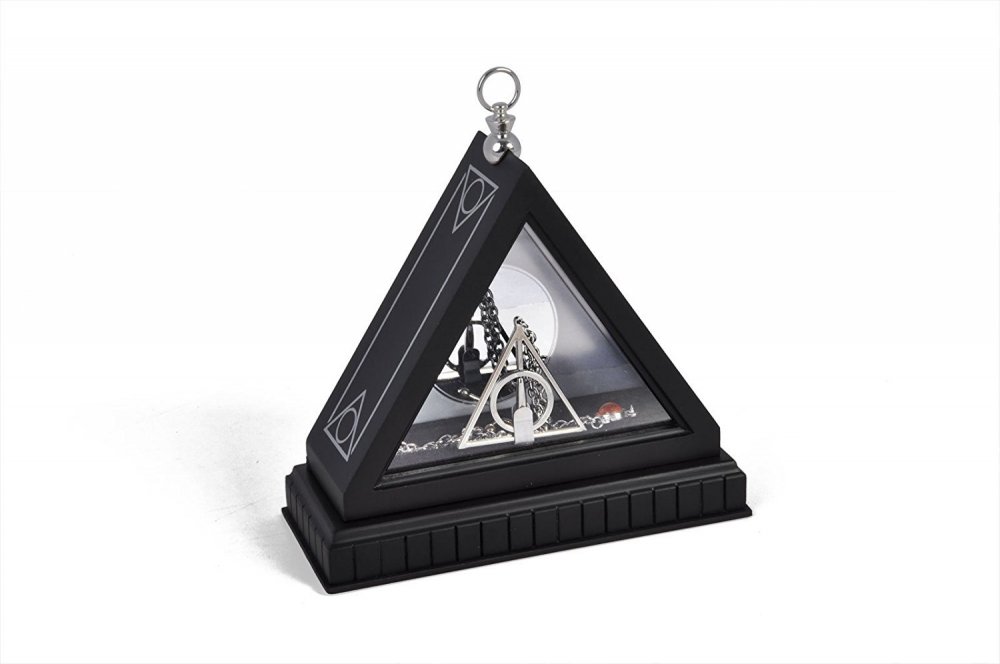 Located twenty miles north of London, in Leavesden, the Warner Bros. Studios Tour is a working film studio that incorporates ‘The Making of Harry Potter’ attraction. Around 6000 people visit each year and tickets can be purchased online at www.wbstudiotour.co.uk. You can cut the cost of a trip by purchasing a Saver Ticket, but these are only available for visits on certain days. Otherwise there are a number of other ticket options; a family ticket, individual tickets and Complete Studio Tour Package tickets that include a digital guide and souvenir booklet. Tickets are posted, or you can collect them when you arrive.

The tour takes place in a studio next to where the Harry Potter films were made, visitors can see sound stages, animatronics, props and special effects whilst they are there. In the Backlot area, you can buy a Butterbeer, ride a broomstick using green screen technology and visit the studio shop for mementos of the day.

US Theme Park Destination - The Wizarding World of Harry Potter

Set in the Universal Resort, Orlando, The Wizarding World of Harry Potter is a major US attraction made up of two separate lands. The first is Hogsmeade Village, and the second is Diagon Alley, both well-known locations in the Harry Potter world. To move between the two, guests take the Hogwarts Express, a replica of the train used by characters to travel to and from Hogwarts. You can visit by booking a holiday package online, or by booking your travel, hotel and attraction tickets individually, which can sometimes workout cheaper. 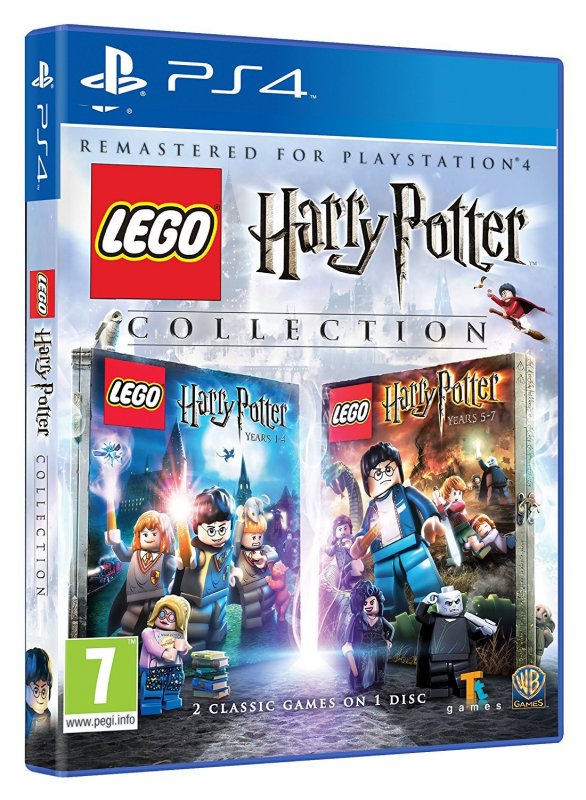 Warner Bros. and JK Rowling have been involved in number of legal disputes relating to pirated copies of the film series, amongst other things. So before you spend any money on toys, clothes, books or films relating to the series, it’s best to check that you are buying from a trusted seller.

Amazon, eBay, Tesco Direct and The Official Harry Potter Shop all stock merchandise, books and films related to the series. Specific products can be found at specialist stores; GAME have Harry Potter titles for a range of consoles, Toys R Us offer branded toys for children from 3 and upwards, and Harry Potter Platform 934 includes a clothing collection amongst its other products.

Major retailers like Tesco, Argos and Amazon are likely to reduce their collection of Harry Potter merchandise during annual sales, at Christmas and in summer. During Black Friday these and other stores participate in the event by cutting prices on many lines, including their Harry Potter branded goods. You can save money on tickets for attractions and ‘The Cursed Child’ stage show by booking well in advance of your visit.

Another good source of general information is the official website and digital heart of Harry Potter by Joanne K. Rowling called Pottermore.

The Harry Potter novels have produced a vast world of films, events, products and gifts. It can be hard to keep up with everything on offer but HotUKDeals can help you find out first about the most attractive discounts. Just visit our Harry Potter page, for regularly updated news about bargains and deals from the brand.