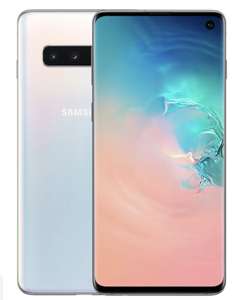 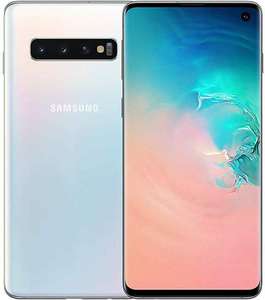 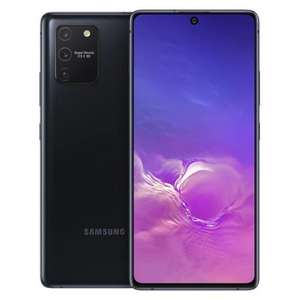 Released in February 2019, the S10 is the latest edition of Samsung's popular S family of high-end smartphones. Competing for the top spot with the Apple iPhone XR, the S10 has attracted plenty of favourable attention since its unveiling. But is it the phone you've been waiting for?

This buyer's guide will lay out the features of the S10, and set it alongside other Samsung phones, as well as options from Apple. We'll check out essential add-ons, as well as ways to save money on your next upgrade. So if you're in the market for a next-generation smartphone, read on. The S10 could be exactly what you need. 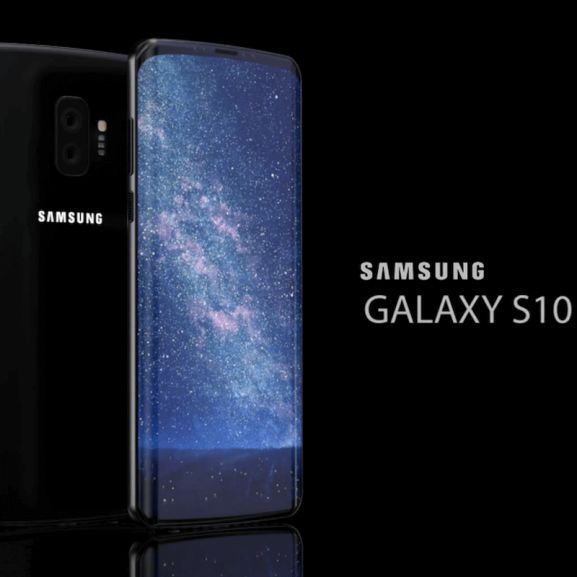 A Quick History of the Samsung Galaxy S Series

The S series is a key part of Samsung's smartphone range. The first Galaxy S debuted in 2010 (with the S standing for “Super Smart”), proving an instant hit. Designed to be a high-end counterpart to the larger Note range of Galaxy phones, the S series has showcased Samsung's industry-leading tech for almost a decade and shows no signs of slowing down.

The S Series pioneered now-common technologies like Super AMOLED visuals, 512GB hard drive capacity, 4K video, and fingerprint scanning. More importantly for the Korean company, the series placed their phones at the heart of the smartphone era. Only Apple's iPhone series has seriously approached the Galaxy family in terms of technical quality and popularity, and the two companies continue to be locked in competition for top spot.

Since its release, the S series has dominated the Android market. In fact, Samsung was largely responsible for the growth of Android as one of the world’s top smartphone operating system’s.

Where Does the S10 Fit into the Samsung S Series?

Released in February 2019, the S10 is a direct successor to the first S model, and you can see that in the phone's visual style. But as usual, the engineers at Samsung HQ have added subtle refinements and a few big-ticket innovations to tempt buyers into upgrading.

There are no revolutionary changes here, though. The smartphone market has reached a kind of plateau, where stunning new developments are few and far between. Instead, the improvements are based around speed, efficiency, and display performance – areas where the S10 scores highly.

Checking Out the Key Features of the S10

With smartphones, the devil is definitely in the details. Every new generation of series like the Samsung S brings slight refinements and the odd massive leap forwards, and it's only really possible to tell whether it's time to upgrade by comparing the features of your current phone with those on offer from the latest models. So, here's what you get with the standard S10:

How has the S10 Been Received by the Critics?

All of this sounds pretty seductive on the face of things. But what have industry experts made of Samsung's latest addition to the S family? As usual with Galaxy devices, the response to the S10 has been almost universally positive.

For instance, Expert Reviews called the S10 a “worthy iPhone XS killer”, noting its triple lens photography setup, wraparound display, and the use of HDR 10+ tech for the display, which delivers excellent dynamic contrast.

Tech Advisor reported similar first impressions, citing improvements to the photography technology, the advantages of abandoning notches in favour of punch-hole designs, and visuals that are “the best you’ll see all year.”

The general consensus of the press: Samsung has improved the display, given users extra options when taking snaps, and improved the design with well-chosen, subtle steps. As we mentioned earlier, there aren't any massive technological leaps forward. In fact, Samsung has resisted the urge to incorporate “foldable” tech into the S range. If they wanted to impress the tech experts, that decision has paid off.

When it comes to choosing a model of standard S10, you'll encounter a few different options. Some are mainly cosmetic (such as case colour), but others ratchet up the price considerably.

Your main option is the choice for different memory and capacity options:

Secondly, you can choose a variety of colours when you buy an S10. The options here aren't wildly imaginative, but they all look the part. Customers can choose from “prism white,” “prism black,” and “prism green” (which makes a nice change from traditional phone colours.).

Additionally, existing Samsung customers can save money by trading in older devices. If you order online at the Samsung store, you can provide details of your current model, and Samsung will provide an estimated discount. When your new phone arrives, it will come with a recycling pack. Simply use that pack to send your old phone back, and its value will be subtracted from your S10 order.

How Does the S10+ Compare with Standard S10?

Before you purchase an S10 phone, it's essential to mention its bigger brother – the S10+. Samsung likes to release S phones in at least two versions, providing both a compact and deluxe option for buyers to consider. The S10 is no exception to this.

The most important difference between the two S10s is the size of their displays. While the S10 features a 6.1-inch AMOLED display, the S10 plus goes much bigger, upping the size to 6.4-inches. That will make a big difference for gamers and movie streamers, but it comes with a jump in weight and mass. So buyers will need to make the age-old smartphone trade-off. Do you want a totally portable device that fits snugly in the palm of your hand or a super-powerful entertainment centre which has a few ergonomic drawbacks?

In terms of cameras, there's not much to choose between the two S models, although the selfie option in the S10+ comes with dual lenses – so Instagram addicts may want to take note. But there is some divergence with memory and capacity. Unlike the standard S10, the S10+ comes with a very high-end 1TB, 12GB version. That's a lot more juice than most users will need, but a very appealing setup for professionals who want to use graphics manipulation or video editing software on their phone.

Battery life should be fairly similar for all S models. The S10+ ups the capacity to 4,100mAh, but with its larger display and size, the actual battery life probably won't differ that much. Both come with wireless charging and the ability to use the phones with wireless earphones.

The bottom line is that both of the latest S family phones are advanced devices with top of the line visuals, processors, photography tools, and designs. It may be a good idea to play around with the S10 and S10 plus in a shop before buying anything, as the way the two phones feel is probably the biggest difference between them. 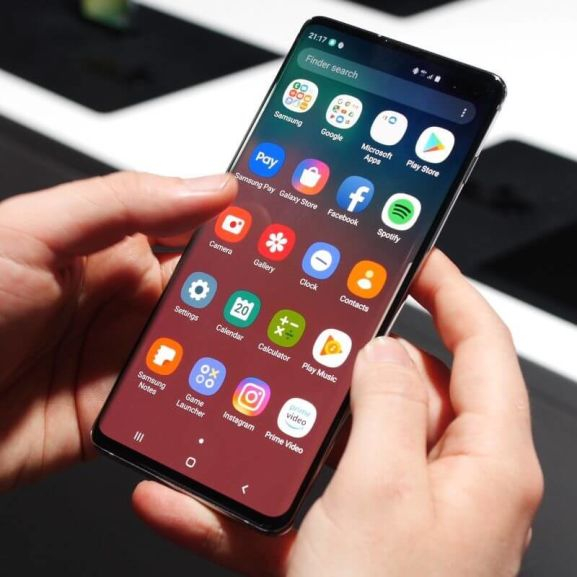 What About the Samsung S10e?

However, there's another dimension to consider here. The S10 and S10 plus have been joined by a little brother: the S10e.

The “e” here stands for “essential”, which gives a flavour of what Samsung is aiming at with this budget phone. It's a slightly stripped-down, less advanced – but still very capable – mid-range smartphone. Packing a 5.8-inch display, the S10e isn't as well suited to watching Netflix or YouTube, and the triple lens system is absent, but this won't be a game-changer for many smartphone users.

While it won't wow many people with its features, the S10e does impress on the price front and manages to offer more than previous models in the same bracket (not to mention the comparable iPhone XR). So don’t rule it out, especially if you’re on a budget.

Now, let's move onto to perhaps the question for high-end smartphone buyers: should you opt for a Samsung device or one of Apple's creations? Specifically, we need to know how the S10 compared with the Apple iPhone XS – two flagship phones that are battling it out at the top of the smartphone market.

Both phones have 6.1-inch displays, so there's not much to choose between them there. However, the S10 has a wraparound display, which Apple's engineers haven't matched. This might give the S10 the edge when it comes to streaming video.

The XR has less RAM (3GB compared to 8GB), has only 64GB of storage, and even has a lower battery life than the S10. However, the A10 Bionic Core chip inside the XR is extremely powerful, and the TrueDepth selfie lens is also a step up on what the S10 has to offer. Insta-addicts take note.

Then there's the OS. Some people just don't get on with Android, with its chaotic update schedule and patchy security record. Apple's iOS is what it has always been – slick, constantly updated, safe to use, but less easy to customise. It also has Siri, who – let's be honest – is a lot more helpful than Samsung's Bixby.

Is there that much difference between the S10 and the XR? Not really. Some users will love the S10's display and the richer visuals that come with AMOLED. Others will prefer the design quality and features of iOS. If you're an Apple fan, the S10 doesn't provide many reasons to switch, and vice versa. Either way, you'll be able to use an impressive, feature-rich smartphone – if you're willing to spend a few extra pounds. Are there any Essential Accessories for the S10?

When you buy an S10 phone, the add-ons you buy can enhance your enjoyment of the device and boost its longevity. So don't limit yourself to the handset alone. Here are some extras that customers won't want to miss: 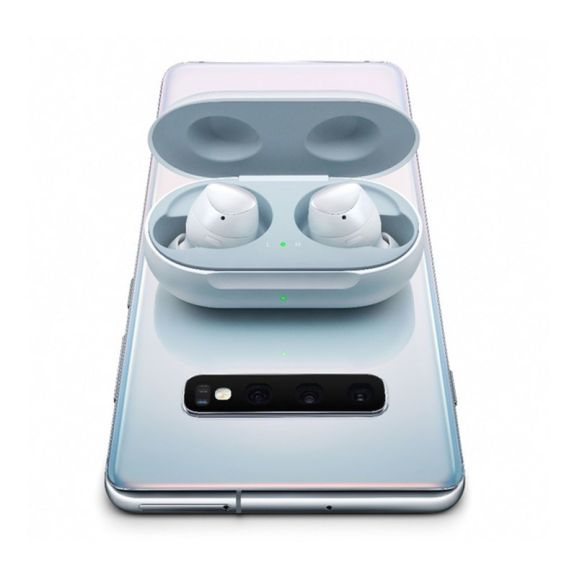 How and Where to Buy a Samsung Galaxy S10

If you feel the need for a smartphone upgrade, and you've decided against the latest iPhone models, the Samsung S10 is a great option to go for. But it's not a cheap phone. Most versions will set you back more than £500, or more when you add extra capacity or add-ons to the mix.

This makes it essential to get the right deal on any S10 purchase. Thankfully, there are plenty of ways to do so. Firstly, be aware that versions with a lower storage capacity will be cheaper than the 512GB options. Don't be fooled into buying a phone with more storage than you actually need. And think about the S10e if you want to make even bigger savings.

When you know which model you'd like to buy, simply check out the hotukdeals Samsung S10 listings to check out prices and bundle deals from the UK's biggest smartphone merchants. Our listings aggregate deals from the Samsung Store, Carphone Warehouse, Argos, Sky Mobile, Very, Mobiles.co.uk – and a host of other vendors. So if a deal is announced, we will let you know.

Shopping at the right time of year can make a difference, too. Black Friday is always a great time to check the listings for smartphone offers, so if you can wait a few months for your upgrade, it could mean saving a few quid. But whenever you shop, expect big savings on handsets and accessories at hotukdeals.

Get Your An Affordable Samsung Smartphone on hotukdeals

Samsung's S10 has broken new ground in the smartphone world. With its AMOLED display, triple lens cameras, and cutting edge wireless charging, this new phone from the S family offers plenty of features that set it apart from other devices on the market right now. If it's time for you to upgrade, check out the best deals around at hotukdeals.