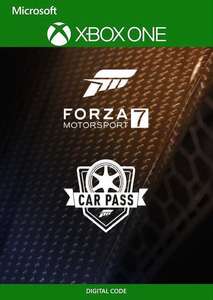 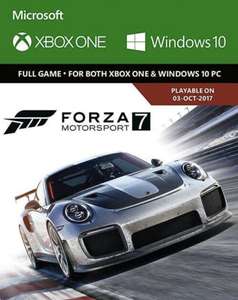 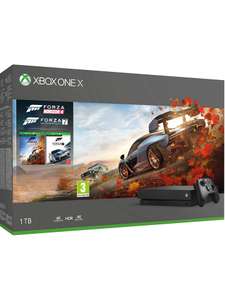 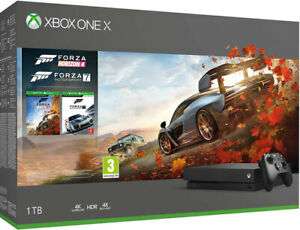 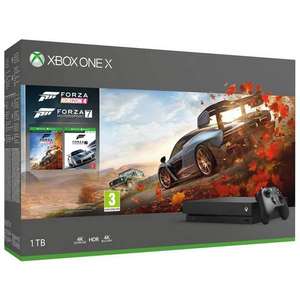 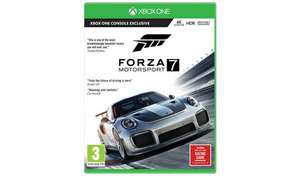 Published by Microsoft's gaming arm, Microsoft Studios, and written by the team at Turn 10 Studios, Forza Motorsport 7 continues one of the gaming world's finest racing franchises. As with previous instalments in the Forza series, the new title allows Xbox One and Windows gamers to control high-performance racing cars across a wide range of tracks, providing an endless array of adrenaline-filled experiences.

The game was released in October 2017, and became one of the biggest selling racers of the year. If you want to discover its blend of realism and sheer speed, this buyer's guide provides all of the information you'll need to find the right edition at the perfect price. 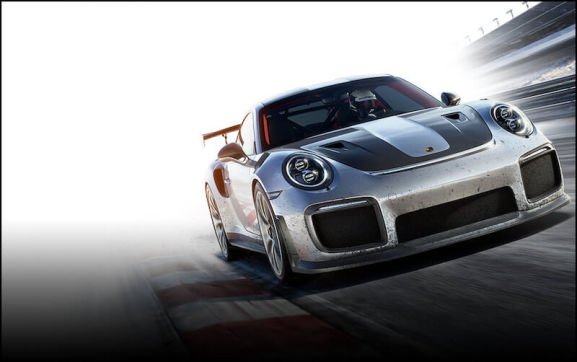 Getting to Know the Forza Racing Games Series

As the name suggests, Forza 7 is the seventh edition of the Forza series. The franchise has been going strong since 2005 when the original Forza Motorsport arrived on the Xbox. Designed by Microsoft to be a flagship title for their gaming console, Forza set a new bar for racing action and was particularly popular in the UK, where it shipped over 200,000 copies.

After that, Forza 2 took the series onto the Xbox 360 and provided compatibility with Microsoft's racing wheel peripherals, which were designed specifically for use with Forza. 2009's Forza 3 upped the number of cars available to over 400, while Forza 4 brought in clever new graphical elements to make the driving experience extra-realistic, as well as a partnership with the cult British TV show Top Gear.

2013's Forza 5 brought the franchise onto Microsoft's brand new Xbox One, while Forza 6 in 2015 saw the first Windows version appear, allowing PC users to join the fun. At the same time, Microsoft launched a parallel series of Forza Horizon titles, providing a more free-form, off-road selection of driving challenges. So far, three Forza Horizon instalments have been released, the first two of them Xbox exclusives and the latest edition coming out for Xbox and Windows 10.

So, that's where we are with the Forza series. The question is, what does 2017's Forza Motorsport 7 bring to the table?

The key attraction of Forza is its huge range of racing vehicles. The latest edition packs in a massive 700 different models for racers to control, more than any other comparable game. Along with that vast collection of cars, the game also includes 32 tracks, with desert raceways set in Dubai, street racing in American settings, and a replica of the Suzuka Raceway in Japan. For the first time in the Motorsport series, Forza 7 also brings in “dynamic weather”, which affects the handling of cars and adds a layer of complexity to the challenge.

Another key aspect of the latest Forza edition is its graphics. Microsoft have made sure that Forza 7 is the most beautiful racing game ever released for home consoles. The visuals are all in pure 4K, providing an incredibly high-resolution experience which is as close to real-world racing as gamers will get.

But while the graphics are realistic, the gameplay doesn't strive to replicate the toughness of handling supercars at high speed. Instead, the developers have included “assists” and replay options to ease players into the game, allowing them to improve their skills gradually.

As you race in Forza 7, you'll also earn in-game credits, which function as money on Microsoft's servers. With the cash you earn by winning races, you can purchase “loot crates” which contain things like driver costumes, new cars and tools to modify your vehicle, allowing you to boost your look and performance the better you get. And, as you get better, you'll also unlock extra competitions, giving a good sense of progression.

That sense of building your skills is also helped by Forza 7's career mode, which is a big step forward from earlier editions. This time, the single player mode is more absorbing and deeper, with plenty of different ways to earn championship points and a real feeling of achievement when you come out victorious.

You can choose to race casually, practice your skills, take on mates with multiple joypads, or play online – pretty much every aspect of what a racing game should offer is bundled in with Forza Motorsport 7.

What Cars Can You Control in Forza 7?

The cars are the star in Forza Motorsport 7, not complex character arcs or accessories to make your in-game character stand out (although you can modify their clothes to your heart's content). With over 700 cars included in the package, it's not possible to list them all, but here's a sample of the beasts on offer:

As you can probably tell, almost all of the world's greatest automobile manufacturers are represented, including Mazda, Nissan, Hyundai, Mercedes, Audi, VW, Volvo, Porsche and Chevrolet. If it's brutally powerful, sporty, and you've always wanted to drive it, there's a great chance that Forza Motorsport 7 will give you the chance to do so.

How the Critics Rated Forza 7

The Forza series has always received a warm reception from the world's gaming critics and the latest instalment is definitely no exception.

Just to take a small sample of the press reaction,Trusted Reviews raved about its 4K graphics and the improved single player career mode. Naturally enough, they were also wowed by the vast track and car selection too, although they did note that both the Xbox and PC versions were sometimes afflicted by extended load times.

If anything, IGN were even more positive praising the introduction of dynamic weather and the mixture of old and new models in the Forza “garage.” Their reviewer also noticed the little graphical touches like minutely vibrating wind screen wipers, and generally fell in love with the racing experience.

For Gamespot, Forza 7 was a triumph, and they welcomed the removal of the Top Gear tie-in, preferring the simple presentation. They loved the AI of non-player racers, as well as the excitement of multiplayer online racing, although they weren't won over by the loot crates system, which often delivered underwhelming contents.

It's hard to find a press reviewer who hated Forza Motorsport 7, and that's reflected in the game's Metacritic ratings – 86 for Xbox and 82 on the PC.

However, a word of caution. While the pros welcomed Forza 7 almost unanimously, user reviews have been more mixed. Some players had trouble with the game crashing (which patches should iron out), multiplayer frame rates could be inconsistent, and regular players actually questioned the computer AI. So it's not as rosy a picture as the headlines would suggest, giving room for alternative titles like Need for Speed.

If you love the idea of having hundreds of supercars at your disposal or you're a long-term fan of the Forza series, there are a couple of buying options for the newest version:

As you'd expect, the prices of each edition varies considerably, at least at face value. But expect to find discounts on all three versions from major UK gaming merchants. And look out for combo deals with the Standard Edition and DLC packs. They can often be a cheaper way to access all of Forza's features without forking out for the Deluxe or Ultimate editions. As ever, HotUKDeals is the best place to check out deals like this, so be sure to check back often.

Forza 7 System Requirements for Your PC

Forza's 4K graphics and multiplayer action place a lot of demands on gaming PCs, and not everyone's system will have the juice to cope. Bear in mind that the following minimum specifications allow the game to run, but won't produce an optimal driving experience. Still, you will be able to race and see the graphics in action:

But to really appreciate the quality of Forza Motorsport 7, it's best to stick to the recommended specs, which are as follows:

Does the Game Have a Multiplayer Mode?

Yes, Forza is setup to provide an exciting multiplayer experience, not just a solo racing challenge.

The core of Forza 7's multiplayer element is a system called “hoppers” which allow players to hop into ad hoc contests. The system uses homologation to make sure that cars and drivers of similar abilities are paired up, so you shouldn't be left in the dust by users with much faster vehicles. But you can easily lose ground if your driving skills aren't up to scratch.

When you join a hoppers session, you could end up racing against 24 real world gamers, and sessions roll over across multiple tracks, with users voting for the next venue as the races end. There are plenty of different classes of hopper as well, with events featuring Indycars, supercars, historic road racing, “modern hot hatches” and even drag racing. So it's tough to get bored with the range of options to try.

And, along with online multiplayer, Forza lets you enjoy split screen races with friends in classic gaming style.

Are There Any DLC Packs or Patches for Forza 7?

When you purchase Forza Motorsport 7, you are only really purchasing the core of the game. Microsoft have setup things so that keen players will want to enhance the experience by purchasing a range of DLC as their skills improve. Here are the main buying options, some of which we've talked about above:

If you want to take your racing to another level, Forza Motorsport 7 is the ideal way to do so, with its mix of sumptuous visuals, huge range of cars and pure racing enjoyment. But as a game released in 2017, it's not necessarily cheap to buy. That's why HotUKDeals comes in handy.

The best way to find a cheap edition of Forza 7 is to use our listings to compare prices. All of the UK's major gaming retailers are represented, including ao.com, Tesco, Asda, GAME, Amazon, Smyths and the Microsoft Store. So if a deal comes around and offers a cheaper price for the Standard, Deluxe or Ultimate editions, you can be sure to find it there.

When you search for the best price, remember that it might be cheaper to buy the Standard Edition and various Car Packs or VIP Membership, instead of opting for the Deluxe or Ultimate Editions. And compare prices for the disc and download versions, too. You can never tell what packages are going to be slashed in price, so comparison is really important.

Timing your purchase is just as important, because major retail events see racers like Forza plummet in price. Black Friday in November is always a great time to shop, but and Amazon's Prime Day in mid-summer are also great chances to snap up Forza 7 (along with the latest Forza Horizon title if you want to double the fun).

The World's Fastest Cars With the Forza 7 Discounts at HotUKDeals

Offering over 700 cars and 32 tracks located across the world, and including an exciting multiplayer system and dynamic weather, Forza 7 is everything an Xbox or PC racer should be. Experience the ultimate in computer racing by snapping up Microsoft's flagship title for less at the HotUKDeals Forza Motorsport 7 listings.