For Honor available for PS4, Xbox One & PC 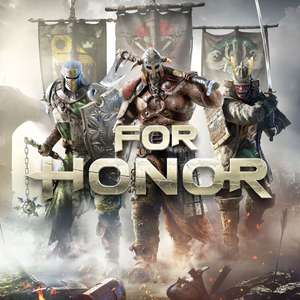 229° Expired
Posted 28th JulPosted 28th Jul
For Honor - FREE Weekend 28th - 3rd Aug (starts at 18:00) from Ubisoft @ Steam/Playstation/Ubisoft/EpicFREE£0.01Ubisoft Deals
For Honor Standard Edition gives you access to the base game including story mode, 7 multiplayer modes and 9 heroes from four Factions. We all die. Some live forever. Carve a path of destru… 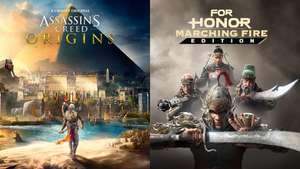 1122° Expired
Posted 20th MayPosted 20th May
Xbox Game Pass Additions - Assassin's Creed Origins (06/06), For Honor Marching Fire Edition (31/05)Xbox Deals
These were announced a while ago but since they had no dates, were removed from the post. Now both are showing on Game Pass app with dates. Assassin's Creed® Origin ASSASSIN’S CREED®… 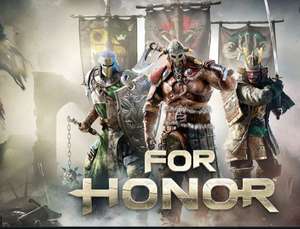 239° Expired
Posted 27th JanPosted 27th Jan
For Honor - Free to play 27 Jan to 31 Jan 2022 - Available on most of the platforms inc. PS5/4, XboX and PC @ UbisoftFREE£0.01Ubisoft Deals
To celebrate a new Hero joining the Hero ranks, and the arrival of the Outlanders, the Standard Edition of For Honor will be free this weekend. Warriors who wish to try For Honor will be abl… 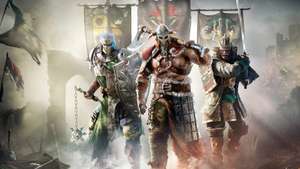 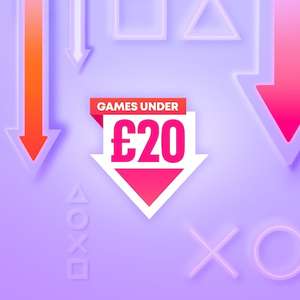 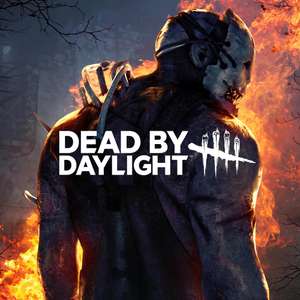 280° Expired
Posted 22nd Oct 2021Posted 22nd Oct 2021
Dead by Daylight (PS4 / PS5) - Free to Play Weekend + Free "For Honor" themed Charm @ PlayStation StorePlaystation Store Deals
Get deal*Get deal*
"For Larry. For Carl. For Honor! Use code FORHONOR by November 11 to unlock this For Honor themed charm. Don't have the game? Get in here anyway! Those pumpkins aren't going to kick them…

For Honor is a third person action fighting game that was released in February 2017 by Ubisoft. Ubisoft are one of the biggest games publishers around, responsible for popular games like Far Cry, Assassin’s Creed and Myst, and For Honor promises to continue their proud gaming record.

Partly a successor to Assassin’s Creed, but with a whole new graphics engine and plenty of new in-game features, For Honor has been met with rave reviews and is building a huge multi-player audience, allowing owners to mix their own personal quests with online adventures.

This buyer’s guide explains how it all works, how to dive into the For Honor universe, and how to buy the game for the lowest prices around.

For Honor: What Background Players Need to Know

For Honor is an action fighting game, meaning that your character is constantly beset by enemies and that he has a wide range of weapons, moves and spells he can use to ward them off. It’s also a historically-themed title. Like Assassin’s Creed, For Honor conjures up a dark, mysterious atmosphere by placing the player in historical situations. Players can take control of warriors like Japanese Samurai, Viking marauders or medieval knights, with the action sprawling across geographical areas and historical eras. Few games have ever been this epic.

All the fighting actually takes place in an imaginary world populated by warrior clans, who are fighting each other in the wake of an apocalyptic natural disaster. However, they aren’t fighting on their own terms. Above them all stands the female warlord Appolyon, who is pulling the strings, setting knights against samurai and samurai against Vikings.

In the game, players can choose between three factions:

How Does the Gameplay Work?

For Honor has two main gameplay modes: single and multiplayer. In the single player game, players choose a faction and take the role of one of the heroes from the four classes. They then enter melee mode and take on missions that are specific to each faction, aiming to vanquish their enemies and control the continent.

Combat isn’t the typical hectic slashing you might expect. Instead, when players come up against other heroes, they enter a sophisticated fighting mode with various attacking and defensive moves and several ways to target the weak spot of any enemy.

As you battle and defeat enemies, your character will gain experience points and new abilities through what are known as ‘feats’ (such as killing a number of enemies in quick succession). Feats can also allow you to restore your lost health and even call in external support such as catapult barrages.

In multiplayer mode, things are slightly different, although the feats, battle mode, and AI players around you remain in place. However, now the action moves into one of five multiplayer modes:

That’s not the end of the story, though. Above the level of brawls and duels, there’s a bigger conflict going on: The Faction War.

Every multiplayer fight contributes to the fortunes of the three factions in the Faction War. Each minor battle accrues war assets to the victors, which are added to their faction’s overall pot. These assets are then used to battle for territory across the continent in rounds that last two weeks. These rounds form part of seasons which each last five rounds.

It’s worth your while fighting hard for a specific faction. The most courageous and deadly fighters in each faction accumulate points that are totted up at the end of each season and extra weaponry is awarded to the best fighters, which remain available for future rounds.

Introducing the Classes in For Honor

Before looking at the nuts and bolts of how to purchase and play For Honor, it’s helpful to look in a bit more detail at the classes of hero you can play. These are the characters you’ll take control of, and there are 12 to choose from, stretched across the three factions.

Firstly, classes from the Legion:

And the classes from the Chosen:

And, finally, the Warborn:

Each of these classes has their own special skills and moves, adding a huge amount of depth to For Honor’s gameplay. You can spend days exploring the many different fighting techniques and special moves, before taking them into the multiplayer arena, where the practice will surely pay off.

Ways to Play For Honor

Now that we’ve touched on the gameplay and the background to For Honor, you’ll probably be wondering where you can actually get hold of it. First off, let’s be clear about the formats it is available for. At the moment, you can only play For Honor on PS4, Xbox One and Windows PCs (so Xbox 360 or PS3 owners will need to think about an upgrade if they want to try it).

Ubisoft opened up a For Honor Beta testing phase in January 2017, inviting sign-ups from PS4, Xbox and Windows gamers. The game itself was formally released on 14th February 2017, and is available from a wide range of gaming retailers.

One place to track down a copy is the Ubisoft website. You can purchase versions for all of the formats in three different editions:

You can also purchase season passes from services like Steam, which essentially upgrade Deluxe or Standard packs to Gold - with add-ons like 30 days of Champion status, extra characters and skins.

This means that some players might not need to purchase a season pass at all. It’s a neat feature for hardened fans, but the Standard or Deluxe packs will serve most gamers just fine and save them money in the process. 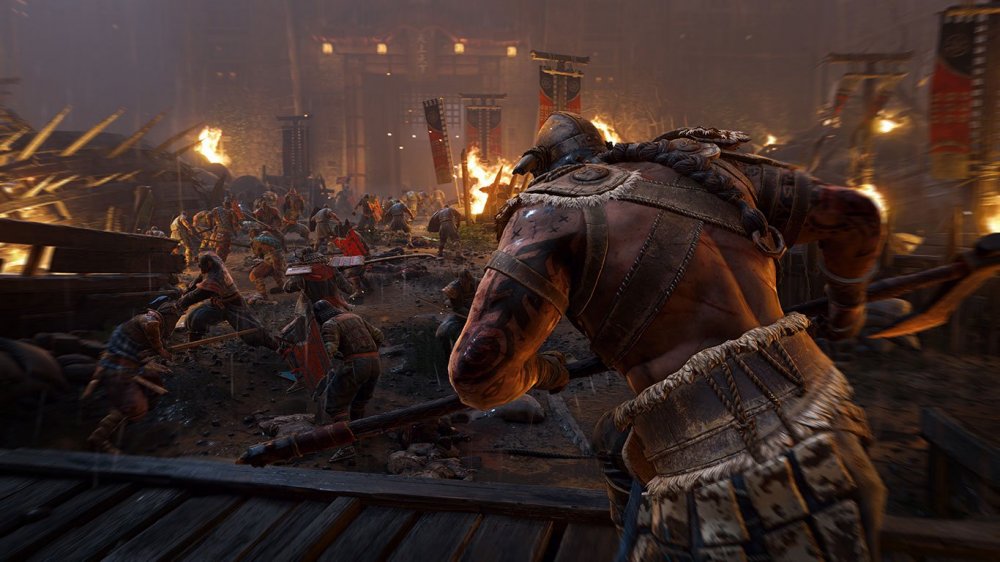 The only exception to that might be less-skilled players. If you are worried about being overwhelmed by more experienced gamers, the Champion Status that comes with a season pass might be the best way to even up the odds a little.

Gaming Accessories that For Honor Fans May Want to Consider

As with any advanced gaming title, the accessories that you use with For Honor can make a big difference to how much you enjoy the experience. Here are some handy purchases that might make your melees even more satisfying:

Similar Titles to For Honor

What if you are in the market for a really exciting historically themed action title with great multiplayer game play, but feel turned off by the complex aspects of For Honor and need something more simple?

If that sounds like you, there are plenty of alternatives to For Honor that are just as enjoyable (and may be far cheaper). For example, if you aren’t wedded to the idea of plunging into medieval mêlées, you could give Battlefield 1 a try. Released by Electronic Arts in late 2016, it has some of the best World War I themed gameplay sequences ever made.

If you really adore the medieval setting, why not try Assassin’s Creed: Syndicate? Published by Ubisoft, Syndicate was released in late 2015 to generally positive reviews and allowed gamers to take the role of a ruthless professional killer, although it does lack a multiplayer mode. 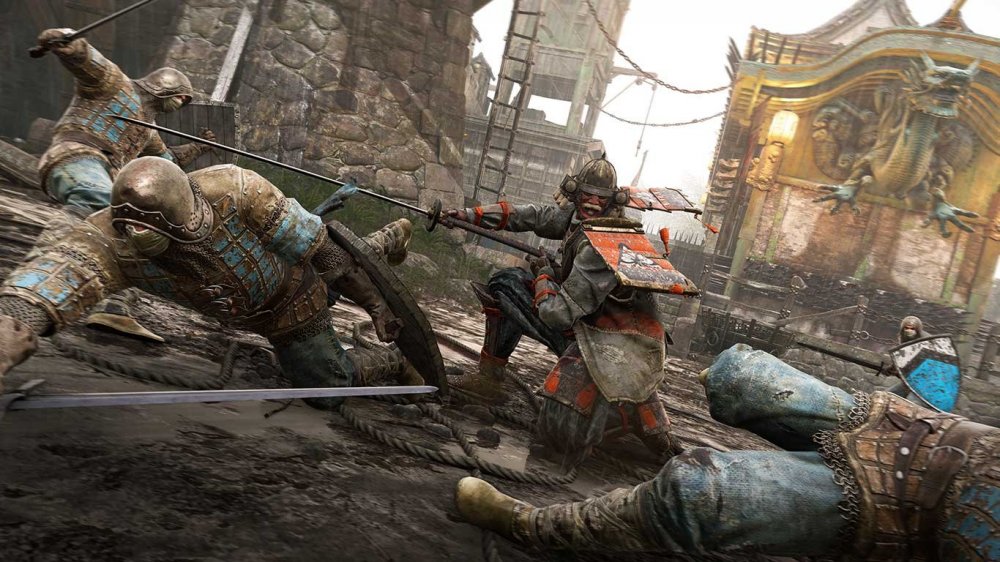 Another popular warfare based shooter is Call of Duty: Infinite Warfare. Although it’s more of a competitor to Battlefield, COD is basically similar to For Honor, with its frantic fighting sections. The major difference is accessibility. If you want to get up and running straight away, it’s a far easier title to get into than Ubisoft’s medieval offering.

These days, gamers are lucky to enjoy plenty of choice. If they want a sci-fi blaster, they can get it. If they want to fight Samurais with Vikings, they can do so. If that’s your scene, For Honor will be an incredible gaming experience, but if you just want pure gameplay, there are other options to consider, so shop around. It’s not the only game in town.

The Best Places and Times to Purchase For Honor

If this buyer’s guide has whetted your appetite for gore and medieval mayhem, it’s probably time to purchase For Honor, but what is the best way to go about doing so?

As we noted above, one place to look is the Ubisoft shop, but that’s unlikely to yield the best deals. Instead, search the HotUKDeals For Honor listings for current offers. You’ll find deals for the Standard, Deluxe and Gold bundle, along with For Honor collectors merchandise and handy controllers, with offers from many of the UK’s biggest gaming retailers.

When you browse the HotUKDeals listings, you’ll find reductions from GAME, Currys, Argos, Tesco, Amazon, Very and CDKeys. There will be download deals for PC, as well as options on the PlayStation Store, Steam and Xbox.com. Every single way to buy the game is available at the HotUKDeals listings, so check back regularly and you’ll soon find a discount on the package you desire.

If you can wait that long, it could be worth delaying your purchase until the Black Friday or January Sales, when all the major gaming platforms and retailers run seasonal sales. But there should be savings to be had all year-round. Whether they are for the game itself, or for season passes, For Honor deals are always coming online. The trick is to find them, and there’s no better place to do so than HotUKDeals.

Save Money When You Purchase For Honor at HotUKDeals

For Honor is one of 2017’s biggest games. A medieval slash-fest for Xbox One, PS4 and PC, Ubisoft’s star title is a multiplayer masterpiece that will delight action and fantasy fans. Get the game for the cheapest possible price by checking out the HotUKDeals For Honor listings.