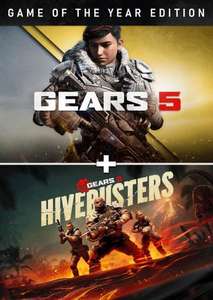 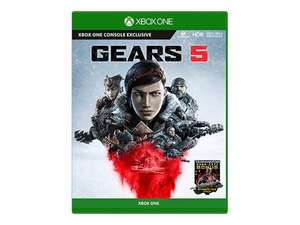 132° Expired
Posted 26th Nov 2021Posted 26th Nov 2021
Microsoft Gears 5 for Xbox One @ BT Shop for £8.48 delivered£8.48BT Shop Deals
The world is crumbling. Humanity’s reliance on technology has become their downfall and enemies are uniting to wipe out all survivors. As Kait you must journey across the biggest, most beaut… 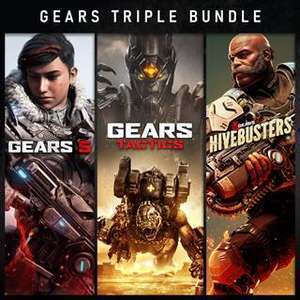 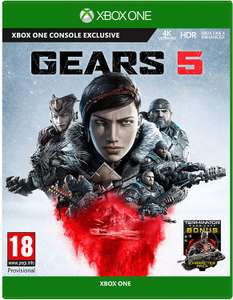 Without Gears of War, it's possible the Xbox One would never have happened. One of Microsoft's most famous gaming creations, the Gears series has captivated a generation of gamers with its high-intensity fighting action, well-designed gameplay system, and the humans vs locusts storyline that never seems to end.

Released in September 2019 for PC and Xbox One, Gears 5 is the latest addition to a stellar family of games. But what does it bring to the table, and how can you save money when adding it to your gaming collection? This hotukdeals buyer's guide will explain everything players need to know about one of the year's outstanding releases. 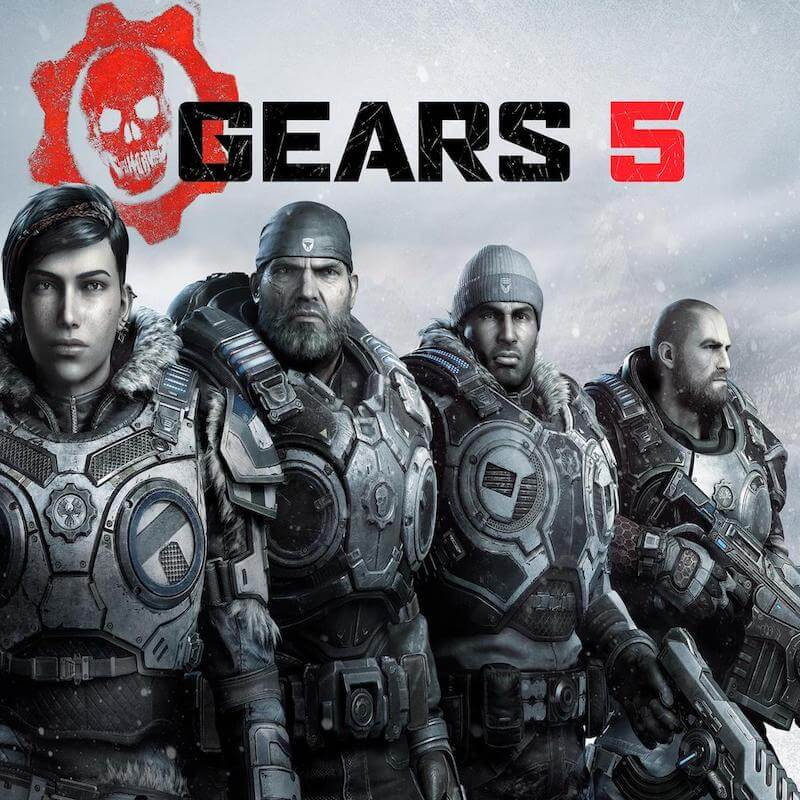 A Quick History of the Gears of War Franchise

The first Gears of War game appeared way back in 2006, as one of the marquee titles for Microsoft's Xbox 360 console. Developed by Epic Games, the initial outing introduced core plot elements that still form the basis for the Gear series, including the terrifyingly creepy Locust Horde, and the Coalition of Ordered Governments, which seeks to prevent the Horde destroying the human populations of the planet of Sera.

The first instalments centred around Marcus Fenix, as he battled both the Horde and a mutated variant of its soldiers, called the Lambent. New titles appeared in 2008 (Gears 2) and 2011 (Gears 3) before Microsoft took a completely different direction. With 2013's Gears of War: Judgment, the developers went back in time, providing much-needed back story for the emergence of the Locust forces.

In 2016, Gears 4 appeared, as the action zoomed into the future, 25 years after the conclusion of Gears 3. This time, players took the role of Fenix's son and his squad-mates, as they battled a new threat, in a post-apocalyptic world where law and order had completely broken down.

As Gears 4 progressed, players realised that this anonymous swarm of attackers was far from novel. In fact, following the use of a devastating counter-weapon in Gears 3, the Locust had laid low, mutating into new forms, and evolving new, more deadly ways to cooperate.

Those who haven't played through earlier Gears of War titles can pick up bundle editions, including the Gears of War: Ultimate Edition for Microsoft Windows PCs. And Gears 4 is still available to purchase. As Gears 5 flows neatly from the storyline of its predecessor, it makes sense for gamers to give the earlier game a try, as it will make the plot of Gears 5 a lot easier to follow. 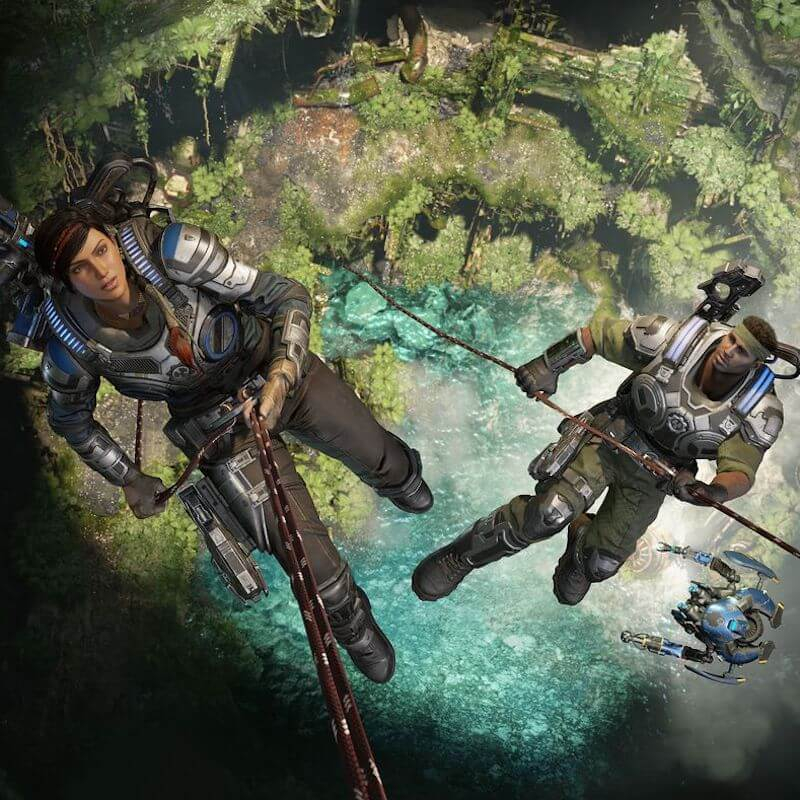 Gears of War 5: Bringing the Story Up to Date

Released in 2019, Gears 5 follows on from Gears 4. At the end of the previous game, the heroes had failed to defeat the Swarm entirely, and the new Locust Horde launches an attack on the cities of the Coalition of Ordered Governments. Kait – one of the major protagonists of Gears 4 – discovers that her origins are not what they seem and that she may hold the key to defeating the Swarm as it bears down on what is left of human civilisation.

Instead of being based purely around fighting, Gears 5 brings more exploration into the mix, as Kait seeks to uncover her own life story and the deepest origins of the Locust. Without giving too much away, gamers will discover that the Locust emerged from the arrogance of humans, not from extraterrestrial sources. Kait's challenge – and that of her friends (including J.D. and Marcus Fenix) – is to mobilise a weapon known as the Hammer of Dawn to smash the Locust Horde once and for all, and to take down its creators at the same time.

How to Play Gears 5: Gameplay Basics

As with previous instalments in the Gears of War Series, Gears 5 is a first-person shooter, but this time one with exploration at its heart. The developers have included the largest maps ever seen in a Gears title and provided a new skiff vehicle to whiz around its various locations.

During missions, combat takes centre stage, and the system is as slick as ever. Players can duck and slide, switch weapons with ease, reload, take aim, and generally cause immense amounts of carnage with a few button presses and shifts of the D-pad. The action progresses along linear corridors, as enemies appear – until boss encounters and plot developments round things off. In other words, this is definitely a Gears of War title, just with open-world sections bolted on.

Players also benefit from the assistance of Jack, a robotic friend with some serious combat abilities. As you explore and complete missions, you'll be able to upgrade his features, keeping pace with the power of your adversaries.

Over the years, Gears of War has become a cult title on Xbox Live. In a world where first-person shooters often fail to translate their game modes to multiplayer environments, Microsoft's flagship title has always managed to do so, and Gears 5 isn't a departure from that tradition.

There are three different multiplayer modes in Gears 5, each with their own dynamics and special challenges:

Multiplayer gamers may also be asking will Gears 5 be cross-platform? Traditionally, it's been quite difficult to sync up console and PC versions of first-person shooters, due to differing hardware capabilities, controllers, and connection speeds.

Microsoft have worked hard to ensure that Gears 5 is a cross-platform title, and players can save games and join multiplayer competitions across both PC and Xbox platforms.

However, there's inevitably going to be a gap between the Gears 5 console performance and speeds on the fastest PCs. Because of this, Xbox users also have the option of switching off cross-play when engaging in ranked multiplayer events, ensuring that players with faster PCs won't ruin their experience. 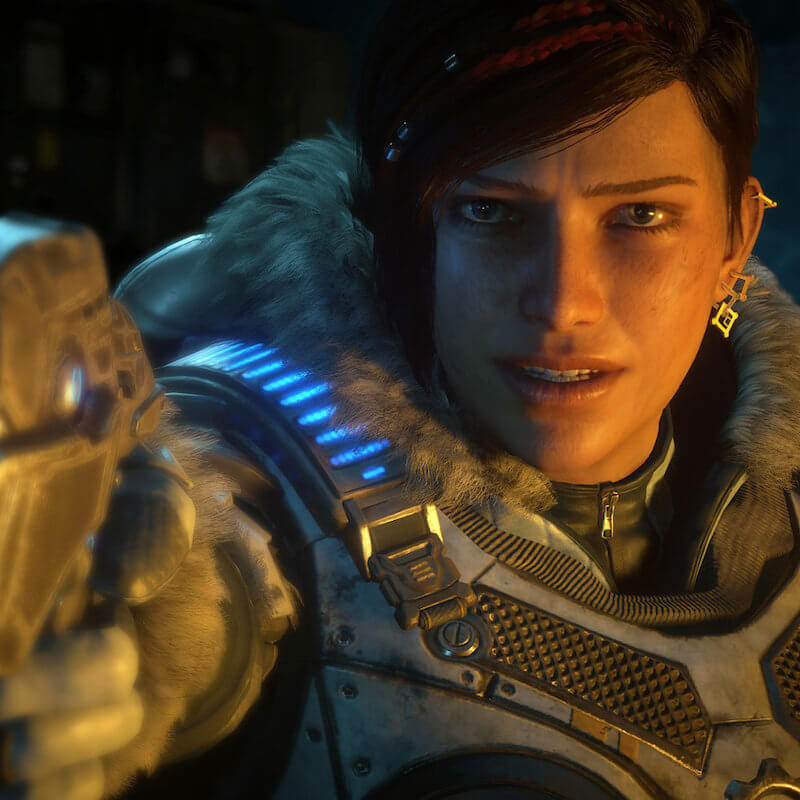 What Have the Critics Made of Gears 5?

In its Gears 5 review, Tech Radar judged that the title “cements Gears of War's place as arguably the greatest shooter on the market”, and that Gears 5 was the best of the series so far. That's high praise given the generally positive reception enjoyed by previous Gears titles and a sign that action shooter fans won't feel short-changed by the latest addition to the franchise.

However, the reviewer did have a few minor gripes. While multiplayer was great, Tech Radar's appraiser wasn't so taken with the main narrative, finding it tough to relate to Kait's character, and generally complaining about the thinness of the backstories of all major protagonists. That's not necessarily a deal-breaker for action lovers, but if you're into adventure gaming and want a meaty story that really satisfies, you may feel a bit let down.

The Next Web also tackled Gears 5, and had a few criticisms to make. All-in-all, the magazine stated that the title was “exceptional”, but that the open-world format needed a few tweaks to make it work properly. According to its reviewer, the maps were too large, with empty spaces, and long journeys between quest locations. On the other hand, TNW's expert was much more infatuated with the storyline than Tech Radar, suggesting that melodrama lovers will find plenty to love.

As usual with big-ticket shooters, buyers will find Gear 5 for sale in a variety of different packages. Here are the major options for gamers to think about: 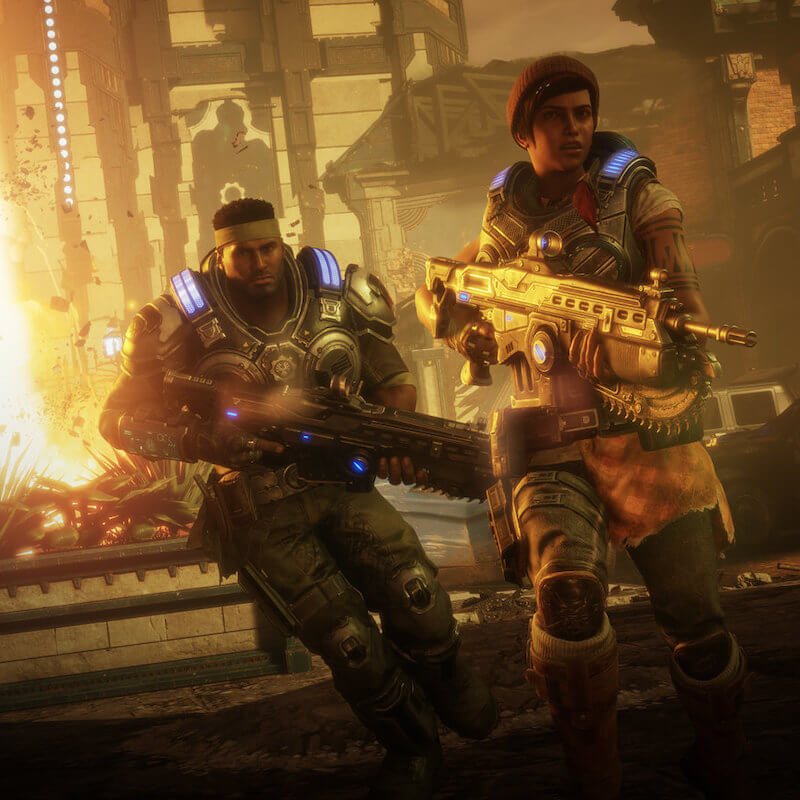 Gears 5 is being made available for Xbox One and Windows PCs, and there won't be a Nintendo Switch or a PS4 version.

With that in mind, here are the minimum and recommended specs for PC gamers:

Minimum specifications for Gears of War 5:

And the recommended specifications:

What About the Gears 5 Game Pass?

Microsoft operates something called the Xbox Game Pass, and Gears 5 is well and truly part of the program. With a Game Pass, holders can make purchases before they come onto the general market, and they can also download over 100 titles (including big names like Gears 5). Passes are purchased on a monthly basis, so it's a little like old-style DVD subscription services, where customers can enjoy free deliveries as long as they pay their monthly fees.

Members don't need to be Xbox owners to take advantage of a Microsoft Game Pass. PC owners can also sign up and download games, which include Gears 5, Devil May Cry 5, Kingdom Come, Resident Evil, Blair Witch, Forza Horizon 4, Rocket League, and Shadow of Tomb Raider. So there's bound to be something that excites your gaming instincts.

Be careful when buying Game Pass subscriptions, though. Firstly, look for introductory deals, as they regularly become available, and can half the price of PC and console subscriptions. Also, think about whether you'll really get value for money from a subscription. Prices can be as much as £10 per month, and many games can be purchased on their own for £20-30. So if you can find Gear 5 discounts elsewhere, they may be a more cost-effective option than a Game Pass.

Finally, always check for Game Pass Ultimate deals. Ultimate is – as the name suggests – the most feature-rich package available, with special discounts for members, advance screenings and play-tests of upcoming titles, and generally more for gamers to get their teeth into. It's common to find packages featuring Ultimate passes and Gears 5 (with “Boost” features included). Be careful when buying though, as they may offer very cheap prices for a few months, followed by steep rises after that. 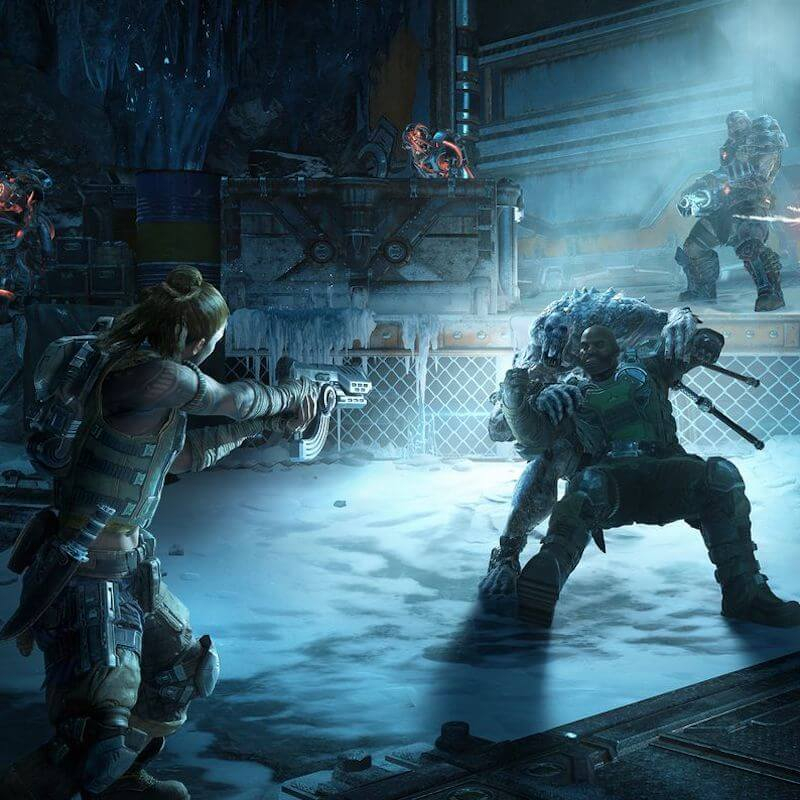 Gears 5 moves one of gaming's greatest sagas forward, with new quests, a complex storyline and – most importantly of all – weeks-worth of mindless blasting, slashing, and multiplayer action. A visual delight, and packing some of the slickest gameplay of 2019, it's bound to be a massive hit, so all Xbox and PC players will want to get their hands on a copy.

However, as with most big-ticket video games, Gears 5 isn't exactly cheap. Game passes can come with annual fees of £120, while the stand-alone Standard Edition costs £35, and the Ultimate version even more.

That's why it's essential to check out the latest Gears 5 deals before making a purchase. By using your shopping smarts, you can easily pick up Gears 5 cheap, and shave more than £10 off the face value purchase price. And hotukdeals offers the best way to do so.

hotukdeals offers a simple portal to current Gears 5 sales. Our listings feature all of the latest Game Pass offers from Microsoft, Gears 5 savings from Amazon and the Xbox store, as well as offers from merchants like GAME, CDKeys, and Currys PC World. There's no easier way to scope out current bargains, and find Gears 5 for sale at the lowest possible price.

Then again, timing your purchase could be the best way to find a Gears 5 best price deal. Gaming prices often drop dramatically around Cyber Monday in November, which is a good time to look for new consoles, controllers, Game Passes, and Gears 5 Ultimate Edition packs. But Amazon Prime Day is also a happy hunting ground, so don't forget to check back with hotukdeals when sales events come around.

In any case, the best course of action is to bookmark our listings and use them when you come to launch your assault on the latest Gears of War title. With our help, the Gears 5 best price is just a couple of clicks away.

Once again, the planet of Sera is imperilled, with mutated hordes of hive-minded monsters threatening to wipe out what is left of the Coalition of Ordered Governments. As usual, a few toughened marines stand between civilisation and annihilation. If saving the world is your thing, Gears 5 is the game for you. And if you want to save money while smashing mutant hordes, be sure to check the hotukdeals Gear 5 listings.